An adorable baby gorilla was delivered via C-section in Boston earlier this month, becoming the first male gorilla to be born at Franklin Park Zoo.

The yet unnamed baby boy was born on October 14 a healthy 6 pounds, 3 ounces, despite his mother Kiki having complications and bleeding before the her due date. Gorillas are generally between three and five pounds at birth, making him above average.

Zoo New England shared a heartwarming video of the birth as they prepared Kiki for the operation. 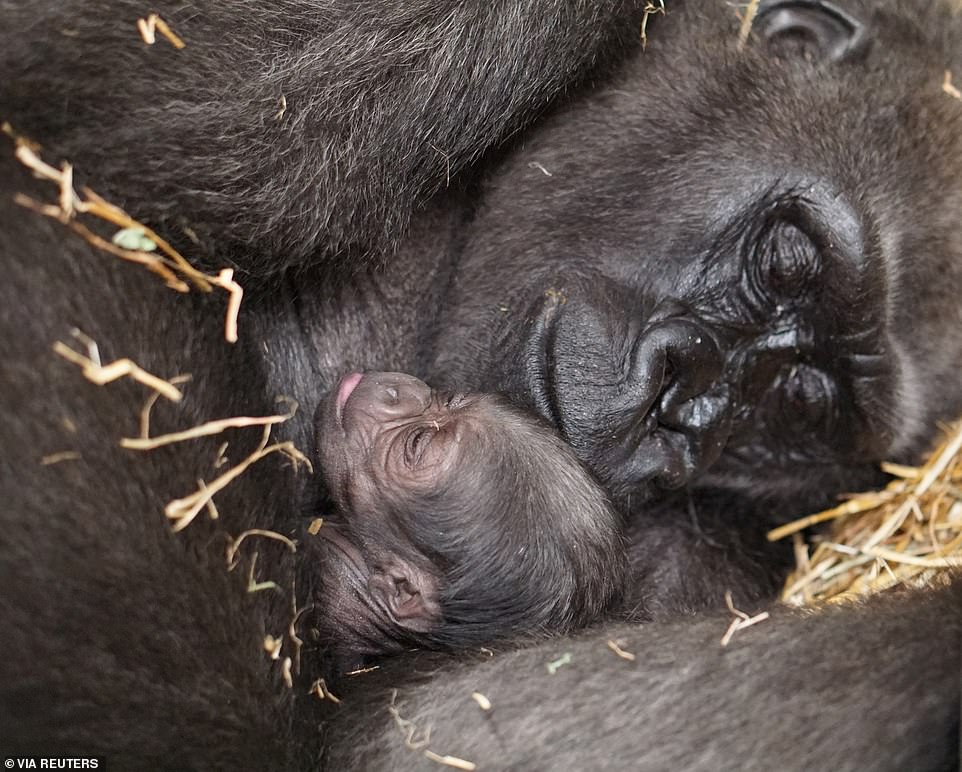 Kiki and her new-born son are bonding well, the zoo said, and will stay off the exhibit while they recover 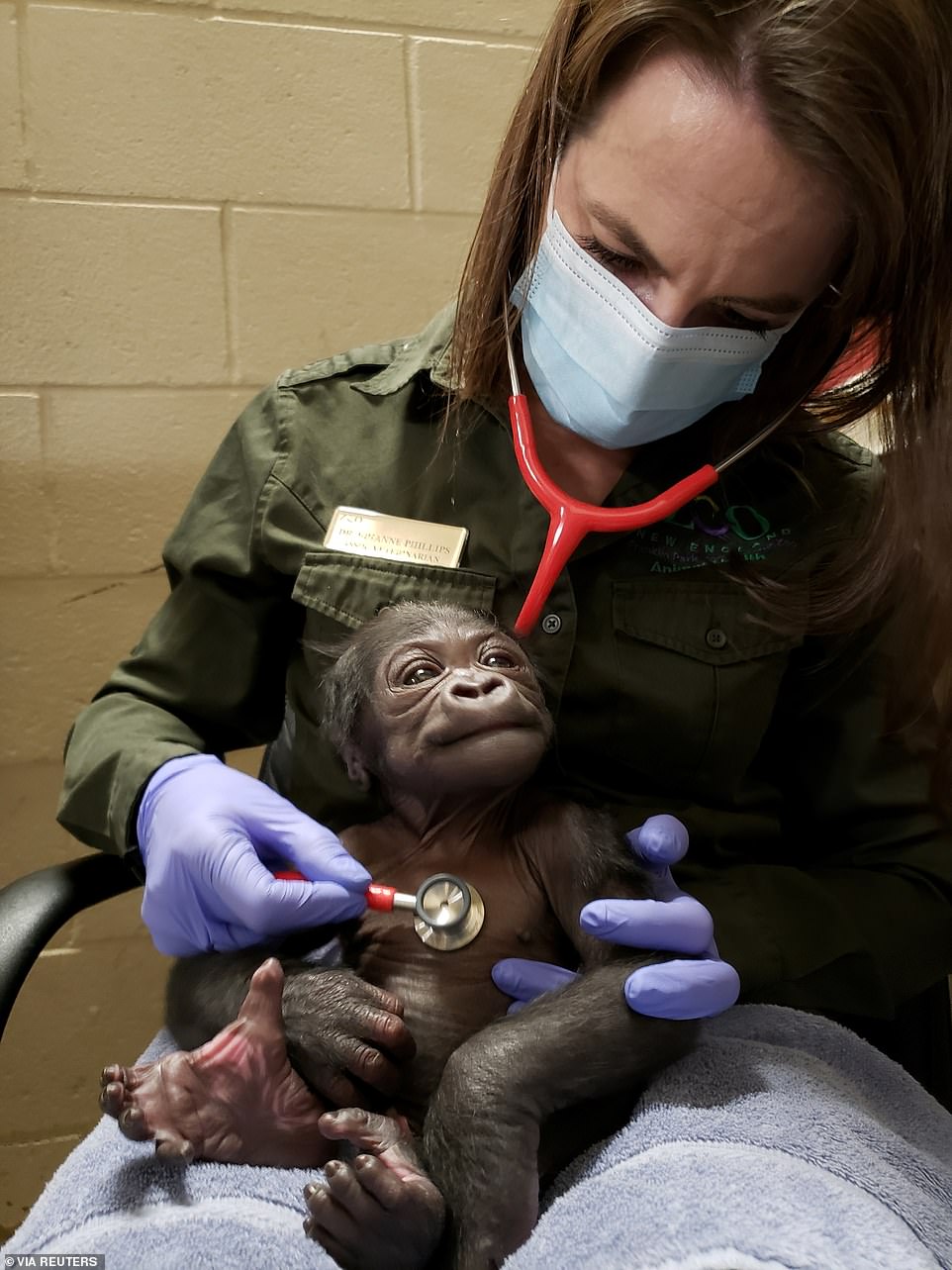 Despite complications before birth, the unnamed baby was 6 pounds, 3 ounces, which is above average 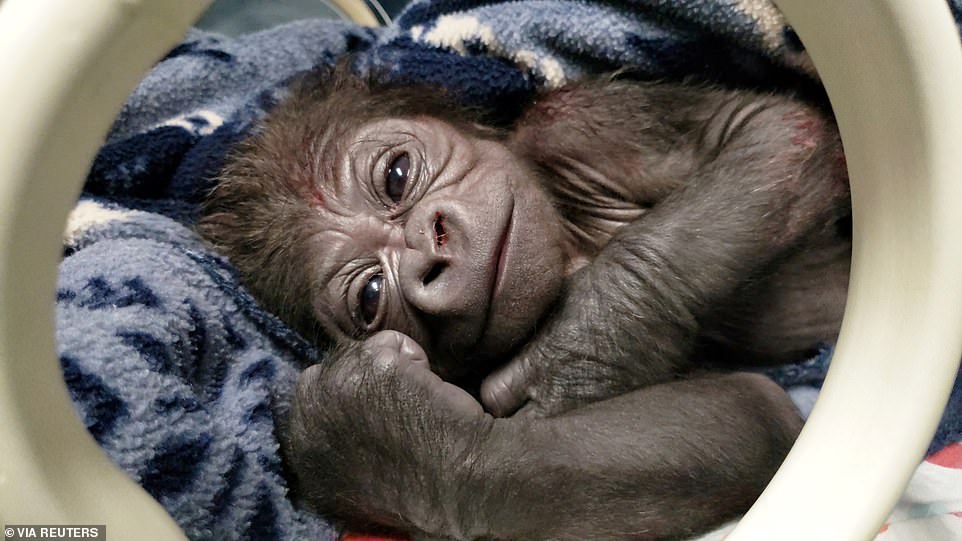 A male western lowland gorilla baby rests after being delivered by Cesarean section from his mother Kiki at the Franklin Park Zoo on October 14. Kiki was diagnosed with placenta previa, meaning placenta blocked the path for delivery of the baby

This is her fifth baby having previously given birth to four girls, two of whom remain at the zoo. The pregnancy has been a result of her recommended breeding with her mate, Kitombe, reports Boston.com.

Kiki, a 39-year-old western lowland gorilla, is seen being reunited with her newest arrival in the video after he had been checked over by veterinarians.

In the days leading up to the delivery, vets with New England Zoo, who run Franklin Park, discovered that Kiki had placenta previa, according to Fox DC. 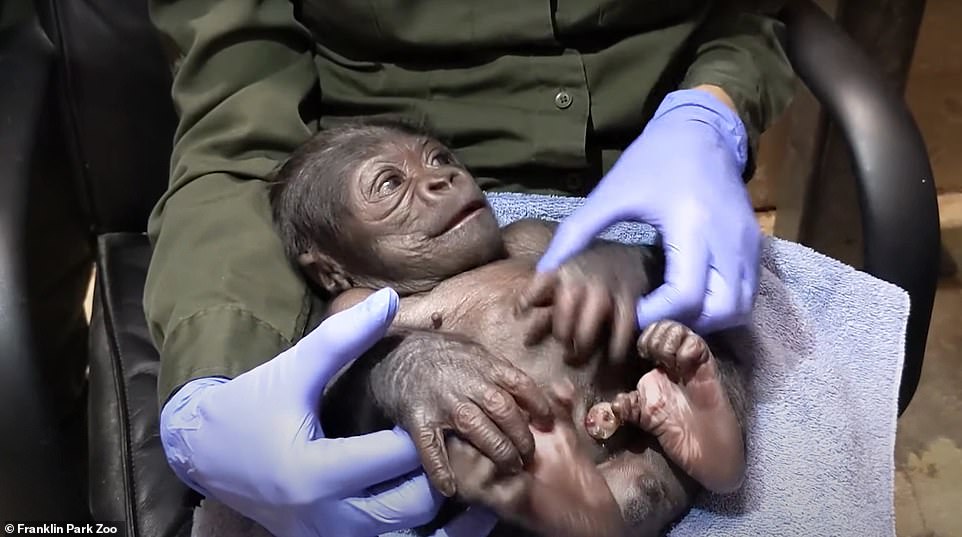 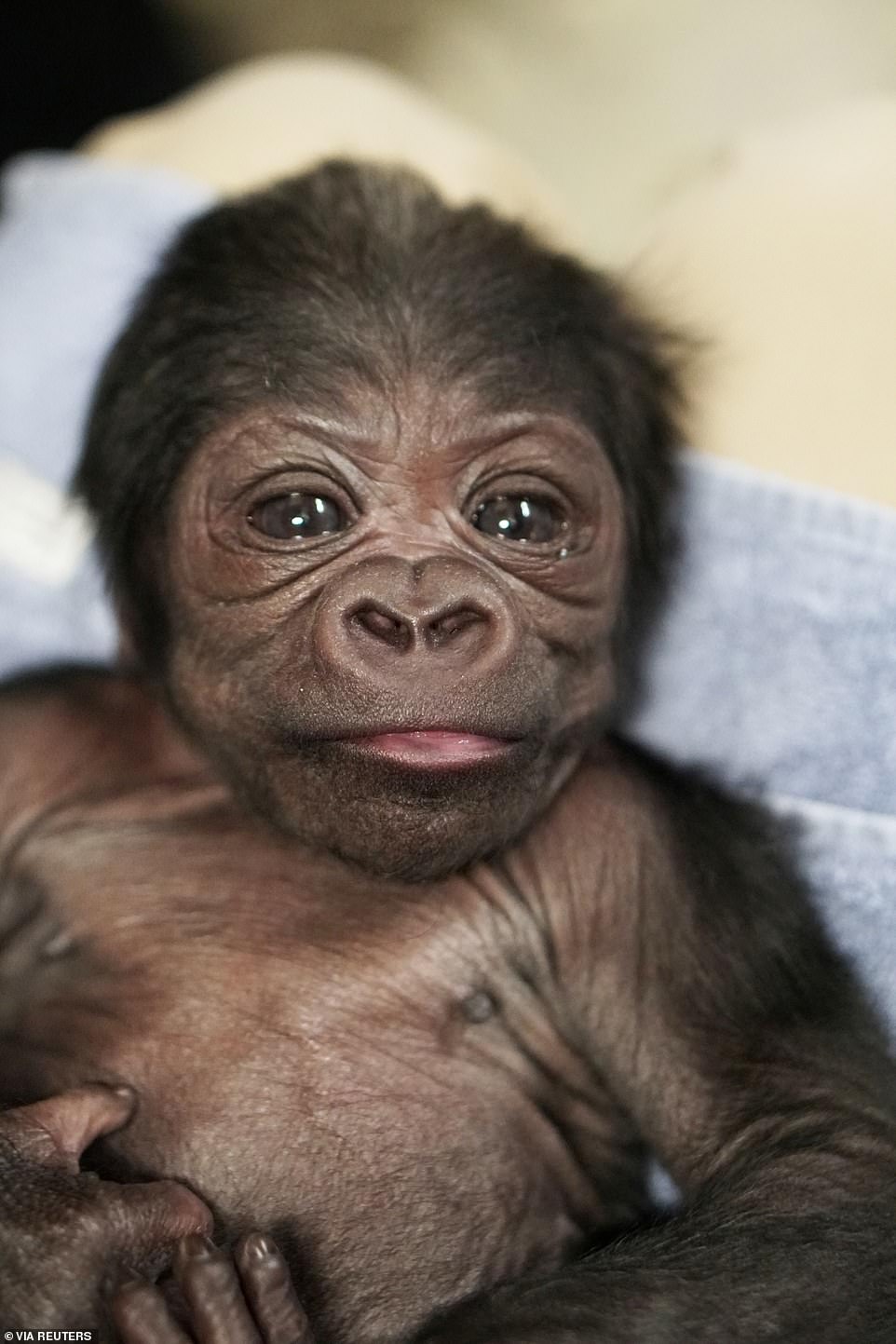 The newborn gorilla is still unnamed. The western lowland gorilla is considered critically endangered in the wild 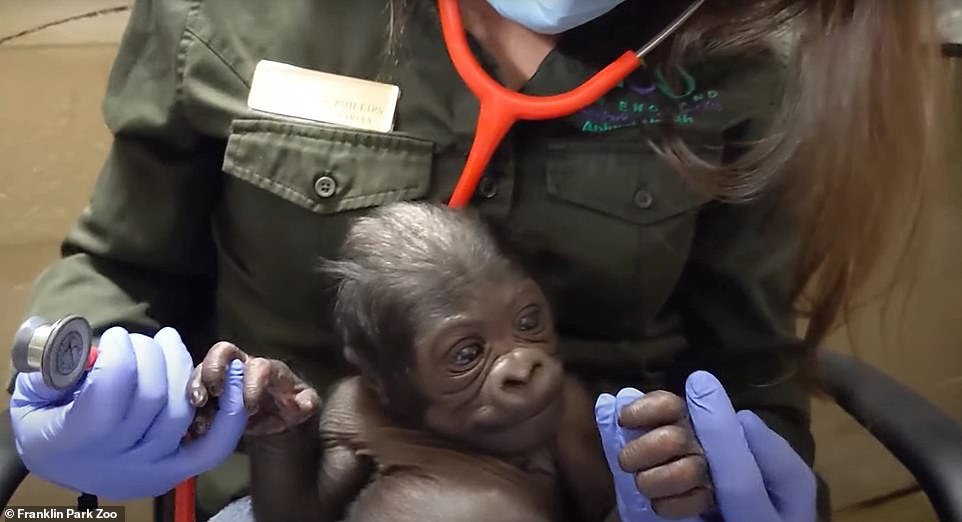 ‘For the health of mom and baby, it was imperative to quickly diagnose Kiki’s condition and perform a C-section before she went into labor on her own,’ said Dr. Eric Baitchman, Zoo New England Vice President of Animal Health and Conservation

The condition means placenta lies over the entrance to the cervix, blocking the path for delivery of the baby.

‘For the health of mom and baby, it was imperative to quickly diagnose Kiki’s condition and perform a C-section before she went into labor on her own,’ explained Dr. Eric Baitchman, Zoo New England Vice President of Animal Health and Conservation..

‘We were fortunate to quickly mobilize an amazing team with our colleagues at Brigham and Women’s Hospital and Cummings School of Veterinary Medicine.

‘This was truly a team effort, and we are relieved and happy that the surgery went smoothly and that mom and baby are both safe and healthy,’ he added.

The newborn baby was cared for by the staff as Kiki recovered from the anesthesia but they were reunited the next day. Mother and son are said to have formed a close bond and Kiki is ‘very attentive’, but both will be monitored further. 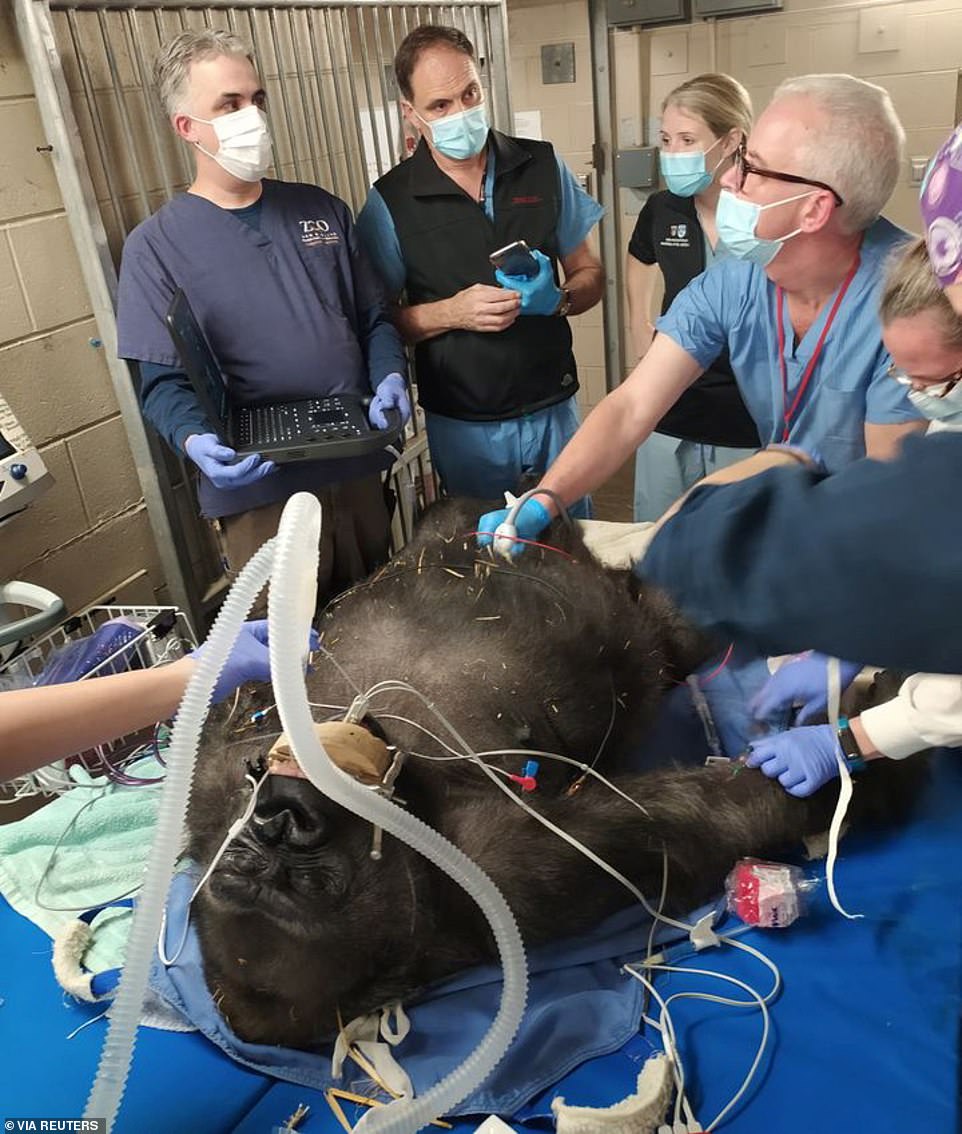 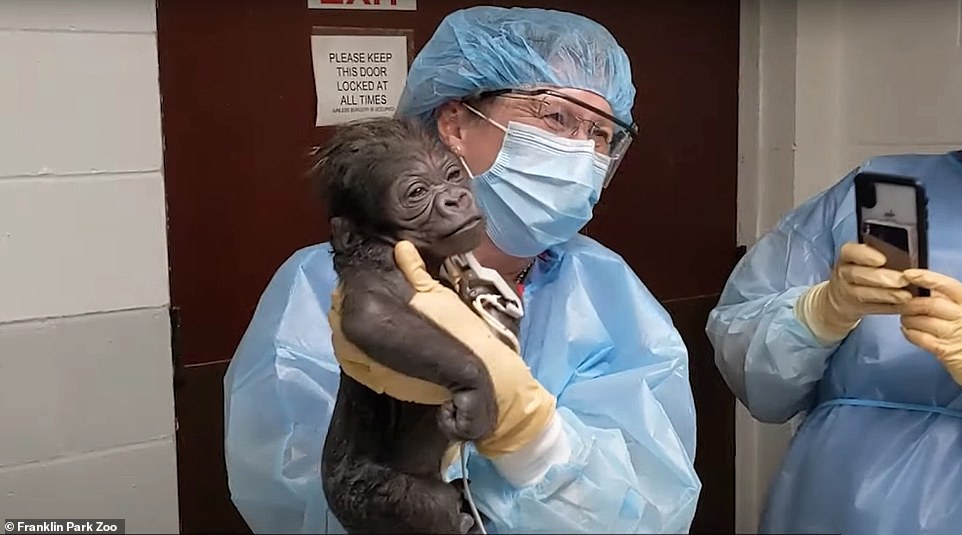 This was the 39-year-old western lowland gorilla’s fifth baby at the zoo. Pictured, the newborn gorilla 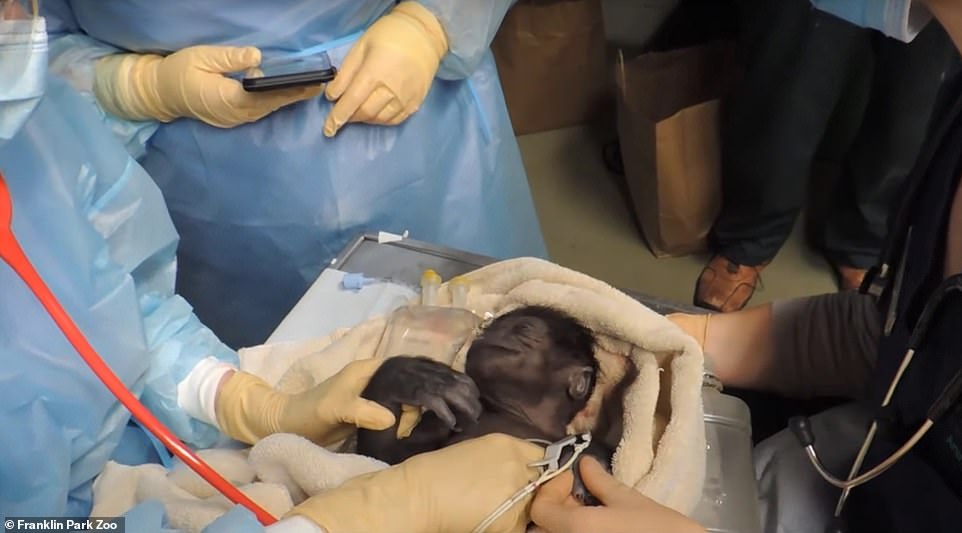 This pregnancy was a result of Kiki’s recommended breeding with her mate, Kitombe 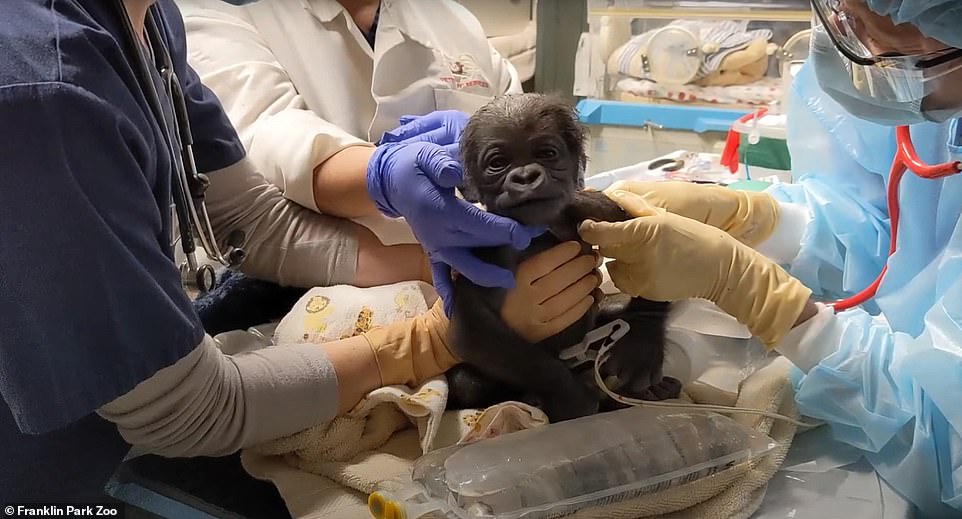 The mother and son, pictured above, will also spend some more time bonding behind the scenes before they are placed out on to the exhibit with the other gorillas as is standard protocol, Franklin Park Zoo confirmed

They will also spend some more time bonding behind the scenes before they are placed out on to the exhibit as is standard protocol, the zoo said.

The western lowland gorilla is considered critically endangered in the wild and Zoo New England says it remains a ‘longtime supporter of gorilla conservation, devoting passion, expertise and resources to the preservation of this iconic species’.

In the past couple of decades, their numbers in the wild have dropped by more than 60 percent.

According to Boston.com, this is the third major birth announced by the zoo in the past month. They also welcomed a baby pygmy hippo was born October 5, and Baird’s tapir twins were delivered on September 29.