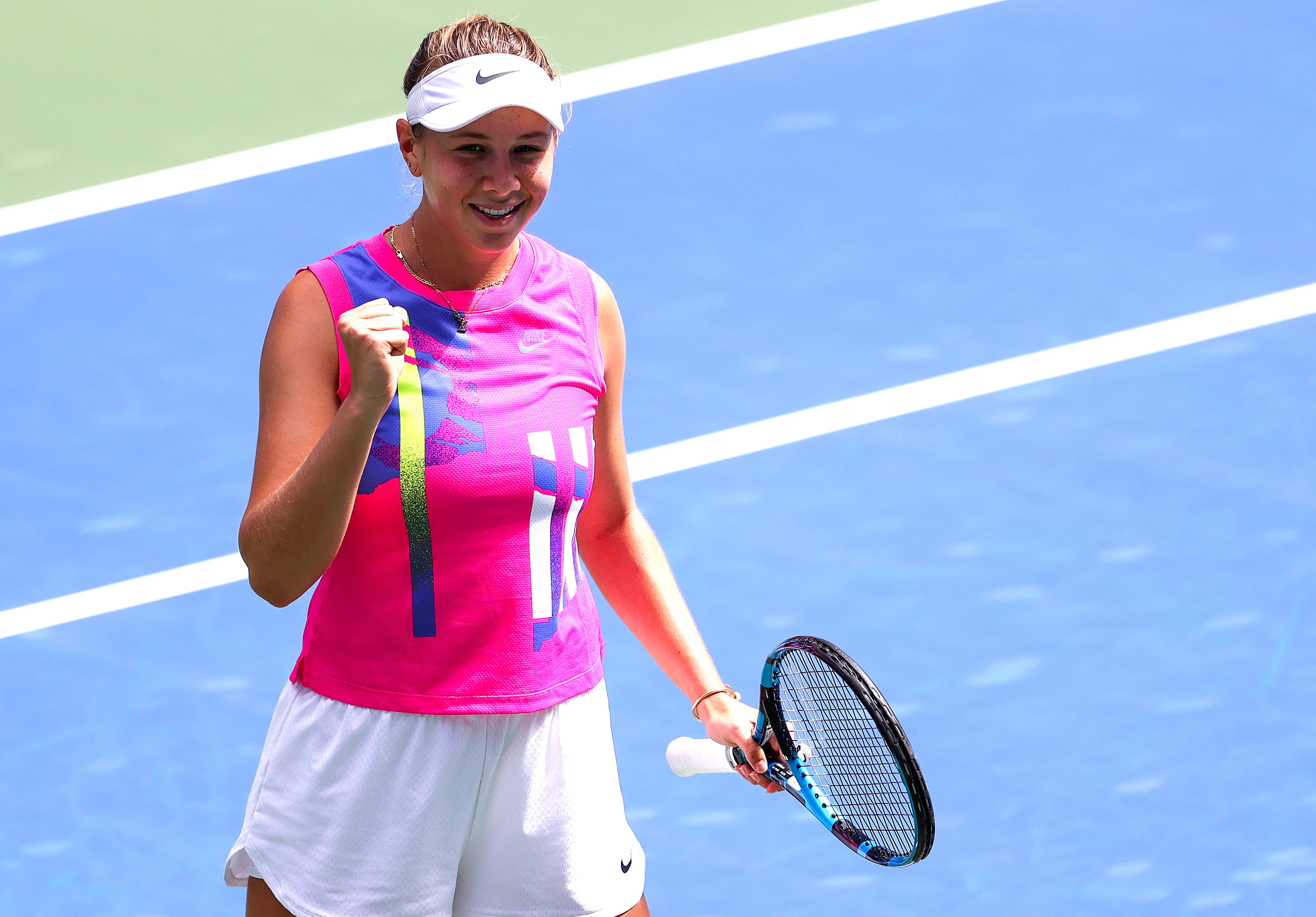 Last year, Amanda Anisimova withdrew from the U.S. Open just days before the tournament began, having suddenly lost her father, Konstantin, to a heart attack.

Now, the New Jersey-born teenager is being guided to victory by her late, former coach.

After dropping the first set of her second-round match, the 19-year-old Anisimova believes she felt her father’s presence in an empty Louis Armstrong Stadium, sparking a 4-6, 6-4, 6-1 comeback over 16-year-old American Katrina Scott.

When the 22nd-seeded, former French Open semifinalist walked off the court, she blew a kiss to the sky.

“Today I definitely could feel a lot of the energy from him, and thinking of him just made me want to play and keep going and I definitely got more energy from that,” Anisimova, 19, said on ESPN. “Having him in spirit just really lifted me up and helped me turn the match around.”

Before playing in the third round of the U.S. Open for the first time, Anisimova has homework to do.

Anisimova, who began taking college courses online during the pandemic, is studying to earn a business degree.

“I was gonna start in the fall, but then in the summer I had so many months, so I said I’ll take two classes just to get ahead, and oh my gosh, I have so many assignments due this week,” said Anisimova, who’ll next face 15th-seeded Maria Sakkari. “It’s getting kind of difficult, but I really want to get a degree so I’m gonna continue with it.

“My match is only like 2½ hours and I have time the rest of the day to go into my hotel and do it. We’re in a bubble. There’s nothing much I’m missing.”

Shortly before 8 p.m., the rest of the night’s outdoor matches were postponed by rain and rescheduled for Friday.

The roofs were closed at Arthur Ashe Stadium and Louis Armstrong Stadium, allowing the four night matches on those courts to be played as scheduled.

In the night session, underneath a closed roof at Louis Armstrong Stadium, the unseeded Victoria Azarenka beat No. 5 Aryna Sabalenka 6-1, 6-3.

Andy Murray didn’t have a second comeback in him in his return from another major hip surgery.

After winning a marathon five-set thriller in the first round Tuesday, Murray dropped the first two sets again on Thursday but wasn’t able to recover, falling to No. 15 Felix Auger-Aliassime 6-2, 6-3, 6-4. The 20-year-old Auger-Aliassime racked up 24 aces and never faced a break point.

American Madison Keys cruised again to a second-round win over Spain’s Aliona Bolsova, 6-2, 6-1. The No. 7 seed also dominated her first-round match (6-1, 6-1) and will face France’s Alize Cornet in the next round.

One week ago, J.J. Wolf had never played a Grand Slam match. Now, the 21-year-old American — the 138th-ranked player in the world — will be among the final 32 players left in the U.S. Open. Following an upset of No. 29 seed Guido Pella in the first round, Wolf advanced to the third round by defeating Roberto Carballes, 6-2, 6-4, 6-3 on Thursday.

With the absence of Roger Federer and Rafael Nadal — as well as an unusually full sports calendar — U.S. Open ratings on ESPN are down 46 percent from last year through the first three days of the tournament. The unprecedented competition with the NBA playoffs is likely responsible for some of the downturn, with Wednesday’s Game 7 between the Thunder and Rockets drawing over 4 million viewers.

Golden Tate’s potential return may give boost to Giants’ offense