A schoolboy who ditched his homework to take a walk along the edge of a lake got a surprise when he stumbled upon the wreck of an ancient longboat.

Cathal McDonagh, from Lisacul in County Roscommon, Ireland, spotted the boat as he was wading in the shallows of Cloonacolly Lough at the back of his family home.

Due to recent dry weather, the water level in Ireland’s rivers and lakes has dropped very low, so the 12-year-old was only ankle-deep when he made the find. 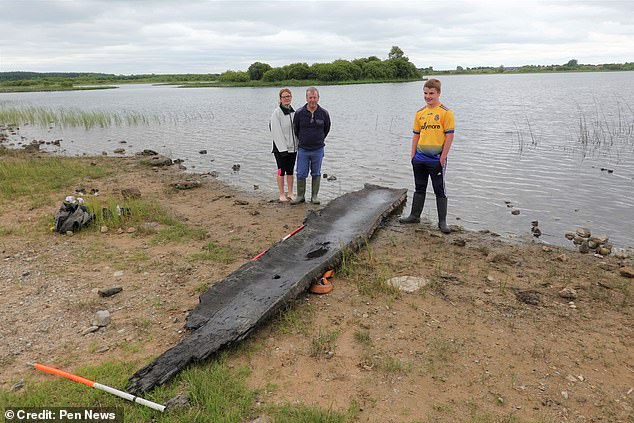 Cathal McDonagh (right) found the boat in Lisacul, County Roscommon, when he was supposed to be studying. He is shown with mother Eileen Greene and Peter McDonagh 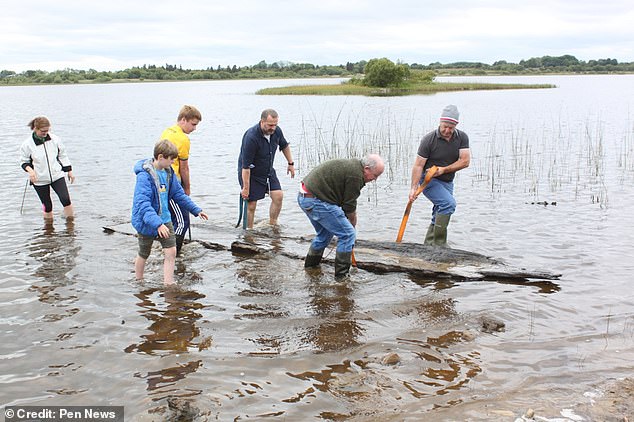 Dry weather had caused the lake’s level to drop, revealing the ancient logboat

‘He was bored and went for a walk down to the lake which is behind our house,’ said his mother, Eileen.

‘He had his wellies on so he was only in above his ankles when he hit upon this. It was that easily found.

‘He was all excited and ran back up to the house to tell us, but I just presumed it was a fencing post, which could easily end up in the water as it’s surrounded by farmland.’

With the help of his parents, the lad dragged the wreck out of Cloonacolly Lough and began to realise the scale of his find.

The family then alerted the National Monuments Service, who advised them to submerge the boat once more in order to preserve it.

The results are awaited, but the family have been told the vessel could date back to 2000BC. 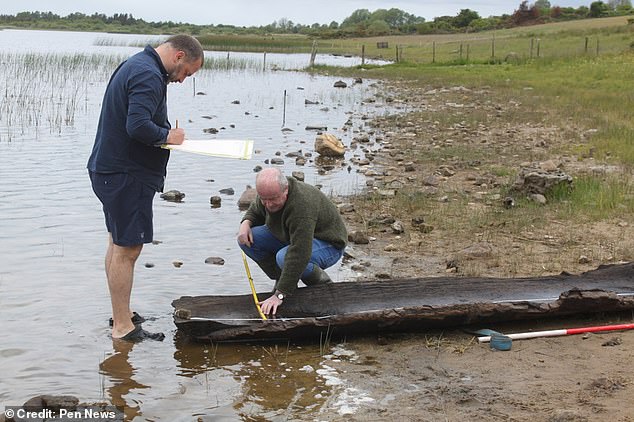 The family called the National Monuments Service which quickly arrived to survey the boat. Two archaeologists are shown above measuring the ancient vessel 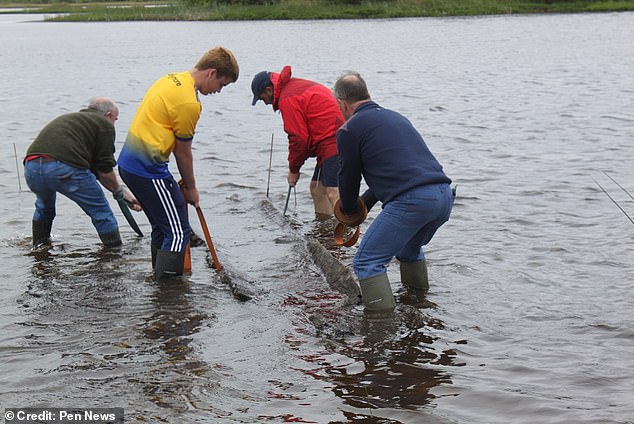 The boat, pictured being pulled from the lake, is due to be dated. It is thought to date back to 2000BC as an ancient settlement from the time is based 300 feet away, but archaeologists have warned that it could be even older

In a statement, the monuments service suggested a huge age range for the vessel.

‘It is not possible to determine the date of the boat without scientific dating,’ the statement said.

‘There is an early medieval crannog – an artificial island settlement – just 328 feet away in the lake.

‘So it is tempting to say that the logboat dates from that period and was used by the inhabitants of the island to ferry back and forth.

‘It could be even more recent, from the later medieval period, or indeed much, much older, dating to prehistory – logboats have been used on our lakes and rivers since 8,000 BC.

‘And they were still in use as late as the 18th century AD. In all that time, they didn’t change much in how they were built.’ 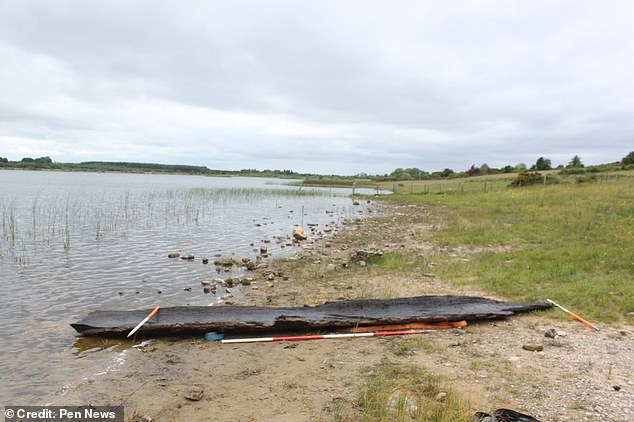 The boat is the third to be pulled from the lake. However, the other two have been lost. One was used to fill a gap in a ditch and a second to repair the roof of a house 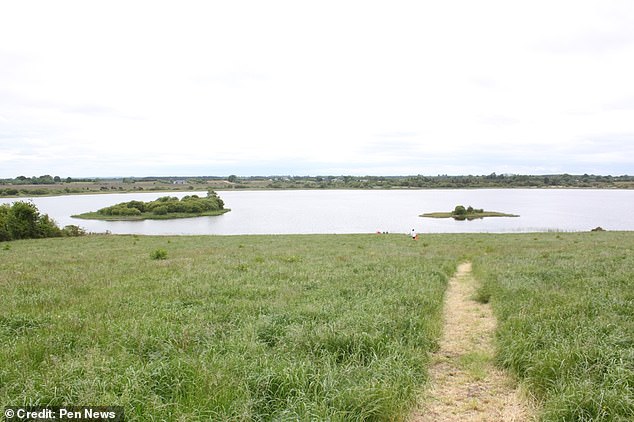 Pictured above is the lake in Lisacul, County Roscommon, where the boat was found

The boat is roughly 18 feet long and just over three feet wide. While its front and back have not survived, the sidewalls survive to a height of 9.4 inches.

Two similar vessels were found in the lake almost 100 years ago in 1922.

But neither was preserved, with one being used to fill a gap in a ditch and the other to help roof a house.

‘That’s what makes Cathal’s discovery so important to us,’ said the monuments service.

‘This boat will be protected and dated to let us be able to tell the full story of the lake and those who lived on and around it.

‘The boat is being kept underwater and was returned to its original environment in the lough which is the safest place for it.

‘The water levels in the lake will be monitored in the future and, if the logboat is under threat of uncovering or drying out, we will take the appropriate actions to ensure its preservation.’