New York Governor Andrew Cuomo and the governors of other northeastern states have gone against Mayor Bill de Blasio to issue a statement saying it is safe for kids to attend school, days after the NYC Mayor closed them.

De Blasio has been slammed for deciding on Wednesday that he was going to close all public schools despite the infection rate in New York City being just 3 percent and only 0.19 percent in schools.

Parents are furious that their kids can’t go to class while bars, restaurants, nail salons and other non-essential businesses are still open. Many private schools are also still open.

De Blasio, in trying to justify his decision, on Thursday said it was because New York City had once been ‘the epicenter’.

He also promised that Cuomo – who is the only official with the power to shut down businesses – would do so soon. But that has not happened. The infection rate in New York City is 2.5 percent but in schools it is only 0.19 percent.

Contextually, Chicago has an infection rate of 15 percent, California’s is 8 percent, Alabama is 24.7 percent, Iowa is 50 percent and South Dakota is 55.9 percent and none have taken measures as de Blasio has.

The governors of New Jersey, New York, Delaware, Pennsylvania, Connecticut, Rhode Island and Massachusetts all signed on to the statement saying schools were safe 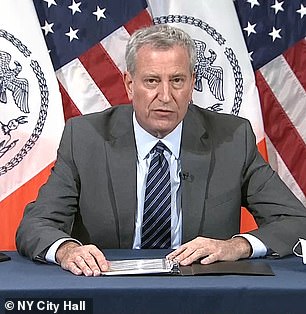 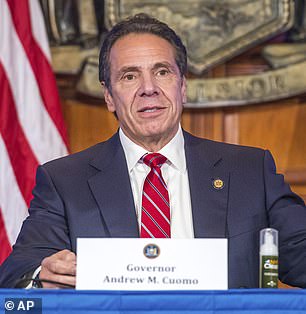 At odds: Mayor Bill de Blasio justified closing public schools because he said Gov. Cuomo was going to start shutting down businesses ‘soon’. On Thursday, Cuomo said it was still too soon for that

It’s been reported that de Blasio was even advised by health experts not to close the schools when bars and restaurants remain open.

Cuomo says he will close them if the infection rate goes up by 0.5 percent.

They didn’t name de Blasio but it was a clear jab at him.

It’s unclear if Cuomo now has the power to overrule de Blasio to reopen the schools and if he will do that if he can, given the growing outrage.

His press office did not immediately respond on Friday when asked if he could or would reverse de Blasio’s decision.

‘Medical research as well as data from Northeastern states, from across the country and from around the world make clear that in-person learning is safe when the appropriate protections are in place, even in communities with high transmission rates.

‘In-person learning is the best possible scenario for children, especially to those with special needs and from low-income families.

‘There is also growing evidence that the more time children spend outside of school increases  the risk of mental health harm and affects their ability to truly learn,’ the statement read.

De Blasio is insisting that another lockdown is coming, even though he does not have the authority to impose one. 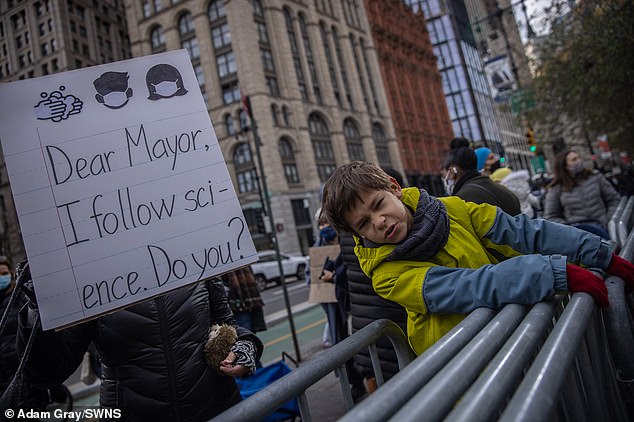 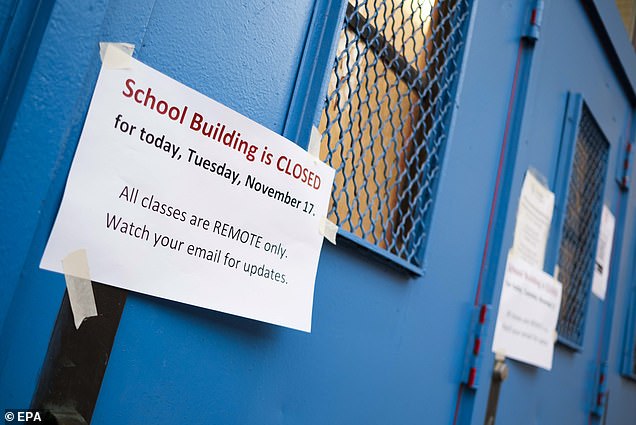 A sign on the door of a closed public school in Brooklyn. New York City Mayor Bill de Blasio announced that the city’s entire public school system, the largest in the country, will indefinitely suspend all in-school classes

He said during an interview on Friday on the Brian Lehrer Show on WNYC: ‘The overall situation on restrictions that are coming, I’ve been very overt about the fact that the Governor has said an orange zone is coming to New York City.

‘By our projections based on the State data , that will happen soon after Thanksgiving, probably the first week of December.

‘And that means a variety of restrictions, including closing indoor dining and closing gyms among other things.

‘And again, I don’t say that with anything about sorrow, for the people who work in those places who need them for their livelihood, the people who own those small businesses and try to make them work through this.

‘But that is what’s going to happen. And then on schools, we’re going to have an update certainly before Thanksgiving.

‘I think in the next few days, we’re going to have an update on the reopening plan and what it’s going to take.’

Entering an ‘orange’ zone means reaching a positivity rate of 3 percent. By the state’s numbers, New York City is not there yet. By de Blasio’s, it is.

Facebook
Twitter
Pinterest
WhatsApp
Previous articleMICAH RICHARDS: Aguero is the man I'd choose to score to save my life
Next articleDonald Trump claims election win and attacks Big Pharma at briefing