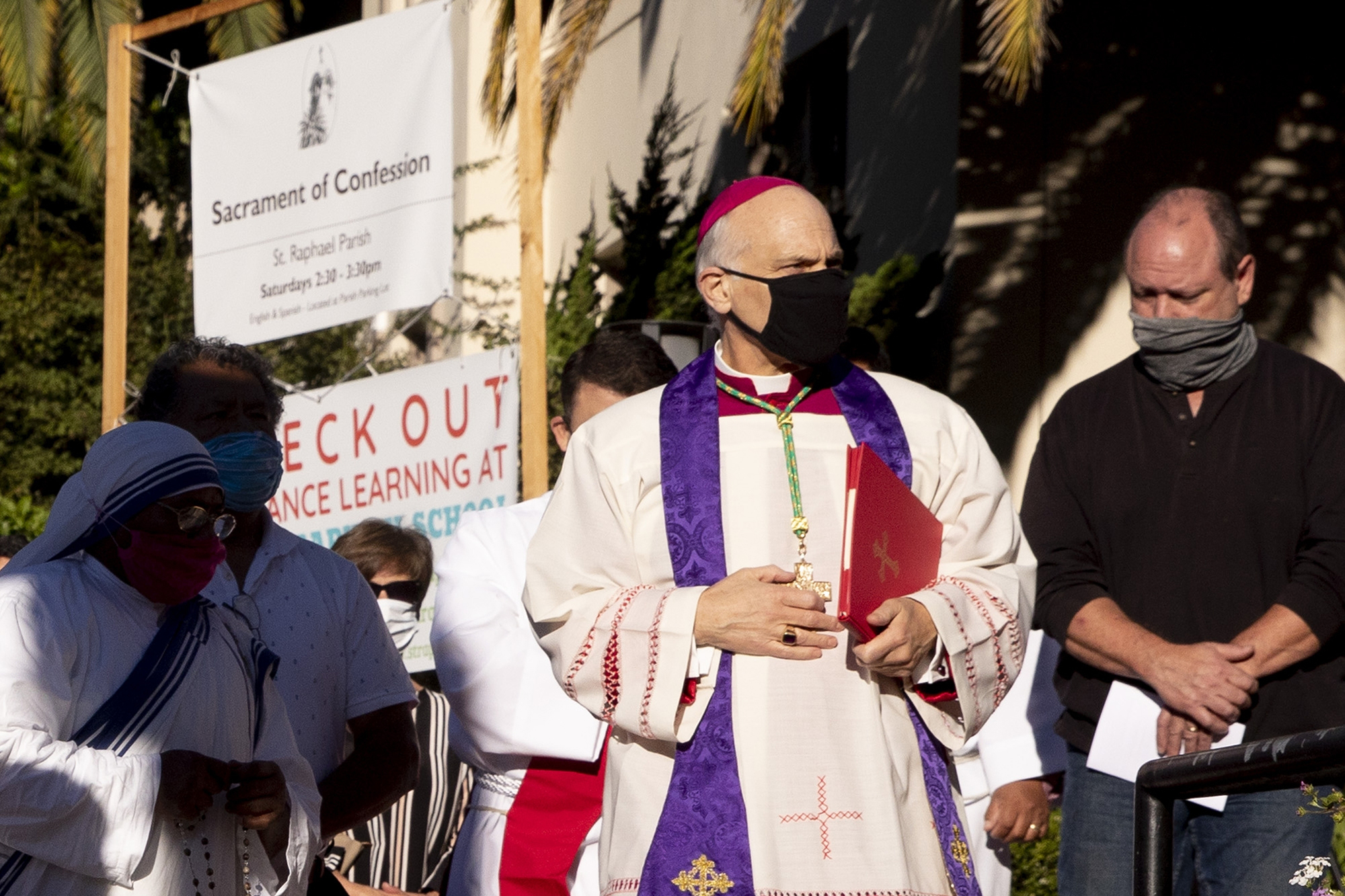 The archbishop of San Francisco performed an exorcism where dozens of protesters had toppled the statue of a controversial saint.

Archbishop Salvatore Cordileone sprinkled holy water and said prayers in Latin Saturday at the site of the fallen statue of Father Junipero Serra, the 18th-century father of the California mission system accused of brutality against Native Americans, according to the San Francisco Chronicle.

“This sacred site has been desecrated, so we know there is evil here,” Cordileone said before the ritual outside St. Raphael Catholic Church in downtown San Rafael, according to the report.

“Be gone, Satan, inventor and master of all fallacy, enemy of the salvation of men. Place yourself before Jesus Christ,” the archbishop reportedly commanded during the 10-minute ritual.

He was watched by about 150 people — mostly anti-abortionists who later marched to a Planned Parenthood clinic, the paper said.

A program provided a translation of the Latin, with the prayers referring to Satan and his followers as a “cursed dragon and all diabolical legions” and calling for his “proud head” to be “crushed,” the paper said.

He used Latin because it “tends to be more effective against the devil because he doesn’t like the language of the church,” he claimed.

San Rafael police said that more than 40 protesters helped vandalize the statue with red paint before it was pulled down as part of nationwide protests on Columbus Day, now often also called Indigenous Peoples’ Day.

Five people were arrested and charged with felony vandalism over the statue, which is being repaired.

Serra, an 18th-century Spanish missionary priest, is praised for bringing Roman Catholicism to the western US — but also accused of brutality against Native Americans who refused to convert.

Those conflicting views were exacerbated when Pope Francis elevated Serra to sainthood in 2015.

As well as driving out Satan at the protest site, Cordileone said Saturday’s ritual was to defend the image of Serra.

The saint established the missions “not to dominate and annihilate” but to expose native Californians to the teachings of Catholicism “and save them from domination and annihilation,” the archbishop claimed.

Gov. Andrew Cuomo on Tuesday urged residents of New York and neighboring New Jersey and Connecticut to avoid all but essential travel among...
Read more
News

New court documents allege that the Jonesboro, Arkansas farmer accused of murdering jogger Sydney Sutherland ran her down with his truck before...
Read more
News

As many as 200 ballots were destroyed in Los Angeles when an election drop-off box was set ablaze. Police are investigating the Sunday night...
Read more

Meghan Markle says the 'bad voices' on social media are 'so loud and damaging' - after admitting she quit her accounts for her...
Read more

Gov. Andrew Cuomo on Tuesday urged residents of New York and neighboring New Jersey and Connecticut to avoid all but essential travel among...
Read more

Tony Lewis has died aged 62. The singer's publicist Bari Lieberman has confirmed the news of his death in a statement. He said: “It...
Read more
Load more

Meghan Markle and Prince Harry say they're 'embracing every moment' of...