Home U.S Are these 'The Boys' that George Clooney each gave $1million to?
U.S

Are these 'The Boys' that George Clooney each gave $1million to?

George Clooney set tongues wagging as he confirmed a longstanding rumor that he once gave $1million in cash to his 14 closest friends this week – leaving everyone wondering who was on the list.

Rande Gerber, Clooney’s closest friend, has already confirmed he received the gift, which he said was given during a dinner at Clooney’s house with a group known only as ‘The Boys’.

Neither Rande nor Clooney has ever given the names of the men on that list, saying only that they are the men who helped the star get his start in Hollywood and supported him throughout his career.

But a photo from Clooney’s wedding may offer a convincing clue. In it, Clooney and his new bride Amal can be seen posing alongside 13 other men in matching tuxedos with Rande just over George’s right shoulder.

Also included in the shot are Curb Your Enthusiasm actor Richard Kind, retired actor Tommy Hinkley and actor-director Grant Heslov, all of whom are known to be close friends of Clooney.

George Clooney has not revealed the identity of ‘The Boys’ – 14 close friends who he has confirmed gifting $1million to. But this photo from his wedding may give some clues. It shows Clooney alongside some of his best pals. They are: 1) David Sagal, 2) John Lambros, 3) Richard Kind, 4) Michael Heslov, 5) Tommy Hinkley, 6) Ben Weiss, 7) Grant Heslov, 8) Thom Mathews, 9) Waldo Sanchez, 10) Rande Gerber, 11) Matt Adler, 12) Steve Lukather, 13) Miguel Ferrer 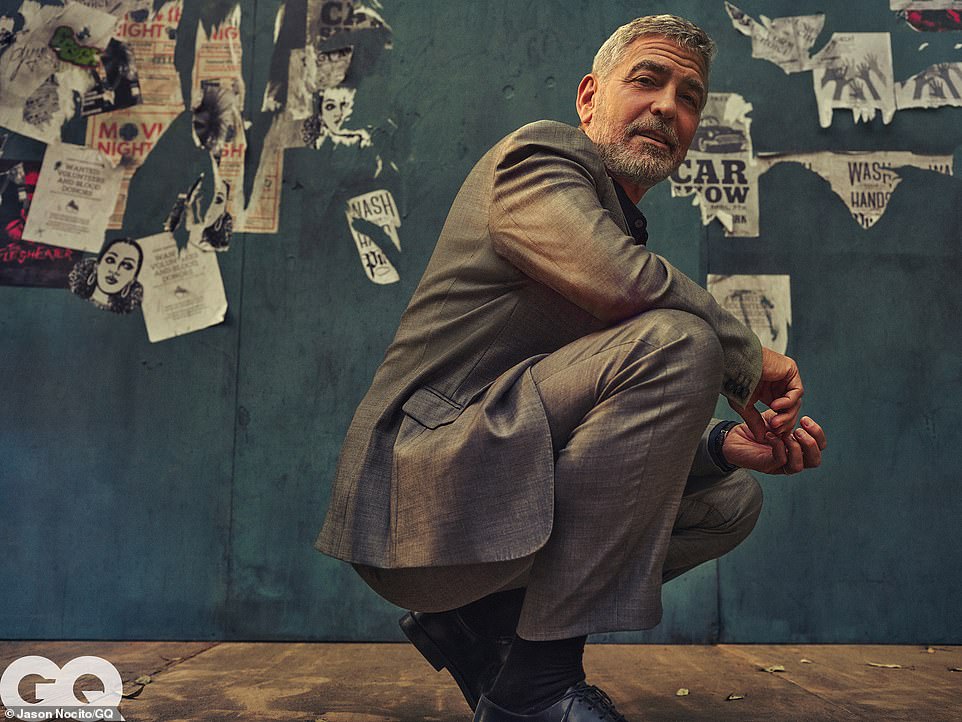 ‘They helped me when I needed help over the years’: GQ’s Man Of The Year George Clooney, 59, confirmed a longstanding rumor in an interview with the publication

Clooney told GQ that he decided to give away the money shortly after getting a bigger-than-expected payday from the film Gravity in 2013, wanting to thank the men who helped him the most in life.

At the time he was single and wasn’t planning on having a family – though had just met Amal, who he would marry a year later on the exact date of the cash giveaway, September 27.

The actor recalled thinking: ‘What I do have are these guys who’ve all, over a period of 35 years, helped me in one way or another.

‘I thought, you know, without them I don’t have any of this. And we’re all really close, and I just thought basically if I get hit by a bus, they’re all in the will.

Explaining how he pulled off the stunt, Clooney said he went to a place in Los Angeles where it is possible to procure ‘giant pallets of cash’ – without explaining where it is, or how he came to know about such a place. 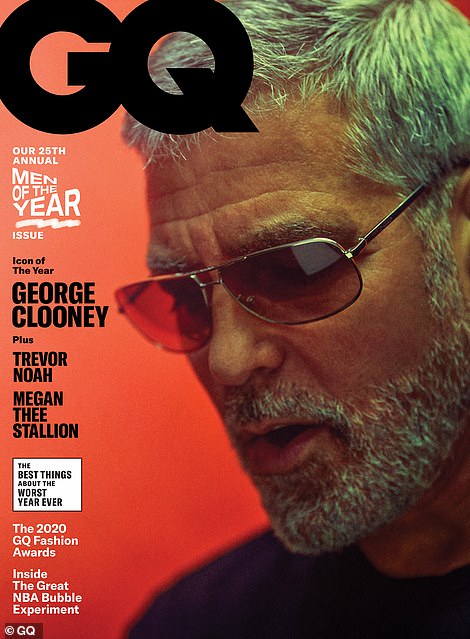 The cover star added: ‘I’d never been in the position where someone else’s life was infinitely more important to me than my own’

Driving a rented van with ‘Florist’ written on the side, the actor picked up $14million in cash and drove it back to his house along with his assistant and two security guards ‘who were s****ing themselves’.

Back at the house, he packed $1million – which he said ‘isn’t as much as you think it is, weight-wise’ – in 14 Tumi suitcases, and invited his friends over.

When they arrived, Clooney sat them down in front of a map with all of the locations he has been to and all of the things he has seen because of them marked on it.

‘How do you repay people like that?’, he recalled telling them, before adding: ‘How about a million bucks?’

Gerber, who first spoke about the scheme in 2017, said he initially refused to take Clooney’s money – so the actor came up with a clever scheme to force his hand.

‘If Rande doesn’t take the million, nobody gets it,’ the actor told them.

Not all members of ‘The Boys’ were doing so well at the time, however.

‘One was working at a bar in Texas at the airport, trying just to support his family, rides a bicycle to work every day,’ Gerber explained.

‘I mean these are guys that took care of George and now he’s giving it all back.’

Gerber – who is worth an estimated $400million after selling a tequila company that he founded with Clooney and Meldman in a $1billion deal – revealed that he donated his own gift to charity.

Looking back on the deal now, Clooney reflected: ‘I was like, “I’m never getting married. I’m not gonna have kids,” I’m gonna work, I’ve got great friends, my life is full, I’m doing well.

‘And I didn’t know how un-full it was until I met Amal. And then everything changed. And I was like, “Oh, actually, this has been a huge empty space”…’ added the friend of Brad Pitt and Cindy Crawford.

‘I’d never been in the position where someone else’s life was infinitely more important to me than my own. And then tack on two more individuals, who are small and have to be fed…’

George also reflected upon his acting career and said: ‘The only way you can honestly talk about things is to include yourself and your shortcomings in those things. 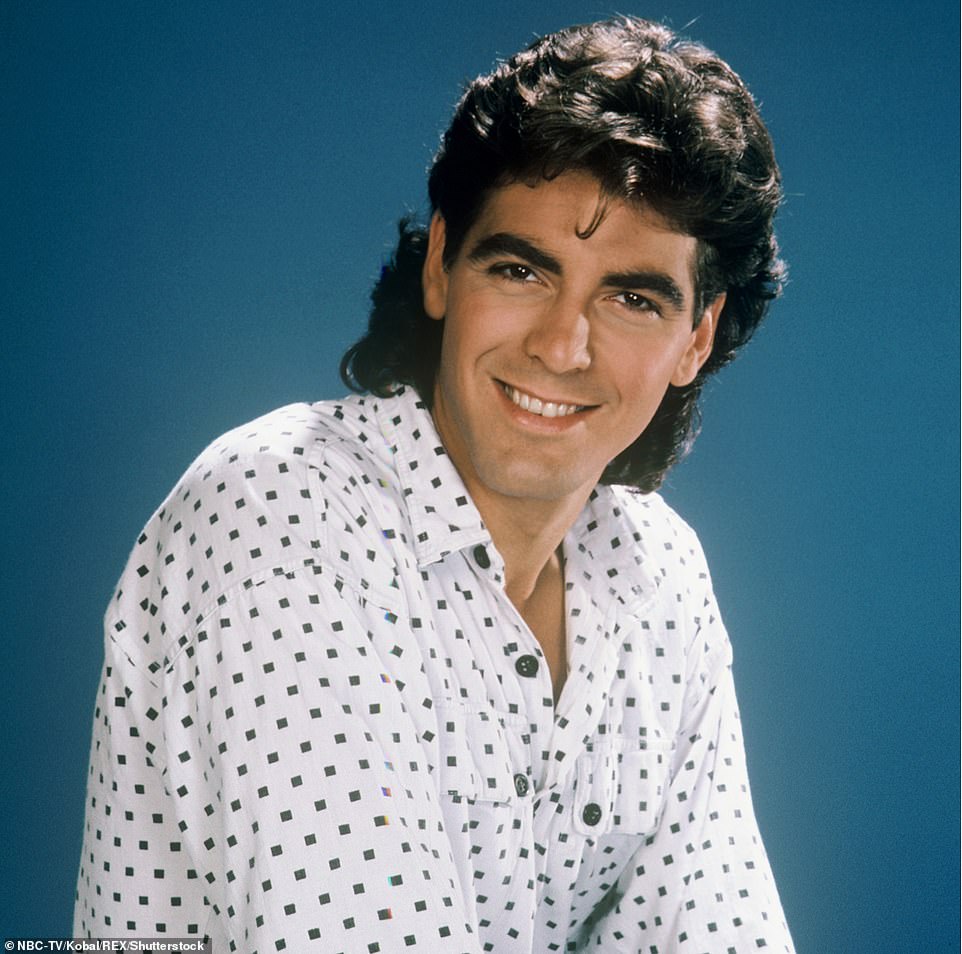 Helping out: When the Ocean’s Eleven actor asked himself how he could repay his friends, he said: ‘How about a million bucks?’; seen here in a headshot for 80s sitcom The Facts of Life 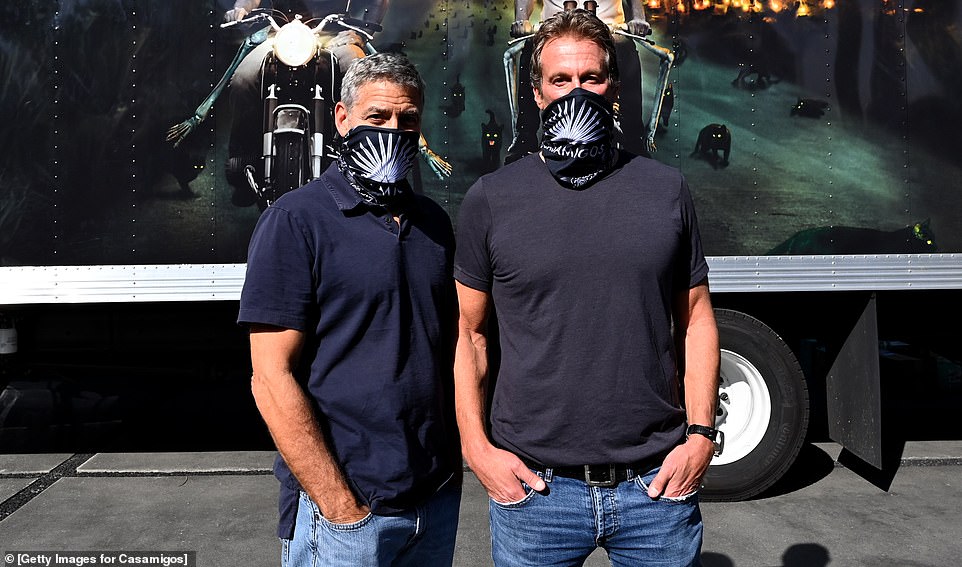 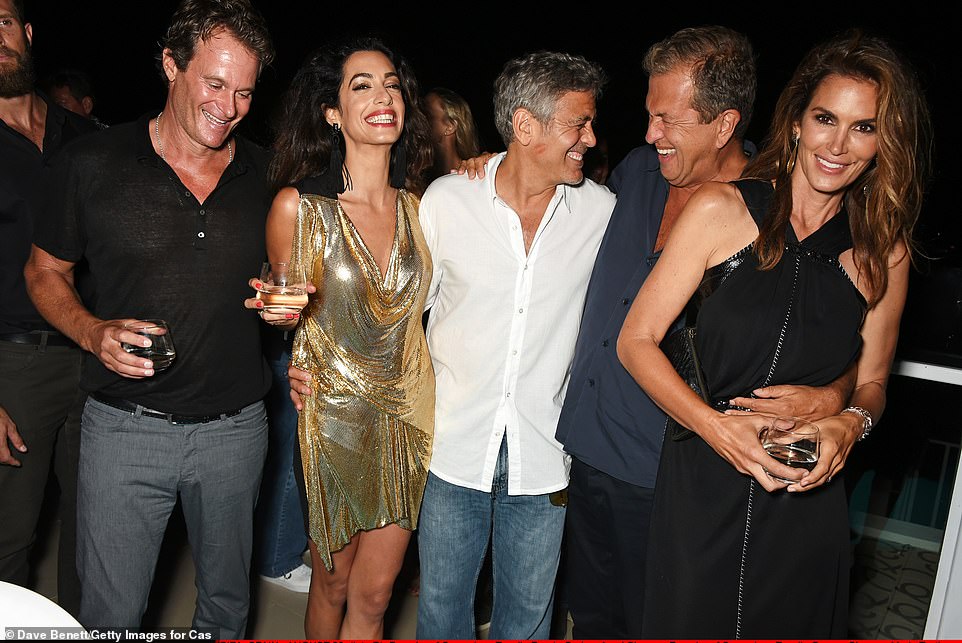 Looking back: The actor reflected that ‘without them I don’t have any of this’; he is seen with Rande, Cindy Crawford, Mike Meldman, and wife Amal in 2015

‘Like, when I say Batman & Robin’s a terrible film, I always go, “I was terrible in it.” Because I was.

‘But also because then it allows you the ability to say, “Having said I sucked in it, I can also say that none of these other elements worked, either. You know?”‘

George said he moved behind the camera because he doesn’t want his age to force him out of the movie industry which he adores so much.

He said: ‘I love this business. And I also don’t want to be 60 and worry about what some casting director or some young producer or studio executive thinks about me anymore. I wanted to be involved.

‘Directing is the painter. Acting, writing, you know, those are the paints.’

George also addressed the Breonna Taylor verdict in his home state of Kentucky.

He said: ‘I can’t believe it. There’s not even a manslaughter charge for a woman who was lying in bed and got shot to death.

Rubbing his eyes, he continued: ‘Imagine if those were three Black officers and they kicked in the door of a white person’s home and shot and killed the woman, the wife, in bed. Imagine that.

He said he hopes that the protests in his home state remain peaceful then, and adds: ‘You know, they talk about looting and stuff. Well, there have been an awful lot of Black bodies that have been looted for 400 f***ing years.’

George also spoke about letting other people, such as Chrissy Teigen handle trolls now. He said: ‘I have much more fun watching Chrissy Teigen. Somebody steps into her world and you go, “Oh, I wouldn’t do that, dude.”

‘It’s so much fun. Like somebody who thinks they’re really smart, and you just go, “Ugh, dude. You brought a knife to a gunfight.”‘

The December issue of GQ is available now.

Facebook
Twitter
Pinterest
WhatsApp
Previous articleMom accidentally sends her two-year-old daughter to school in a 'SASSHOLE' shirt for picture day
Next articleTyson Foods manager had betting pool for how many workers would get COVID-19: suit

Pfizer's coronavirus jab may not prevent vaccinated people from spreading coronavirus, the firm's chairman admitted this week. 'I think that's something that needs to...
Read more
U.S

The ill-will between billionaire investor Bill Gross and neighbor Mark Towfiq over a $1 million garden sculpture all began when Towfiq rented out...
Read more
U.S

Pfizer's coronavirus jab may not prevent vaccinated people from spreading coronavirus, the firm's chairman admitted this week. 'I think that's something that needs to...
Read more

The ill-will between billionaire investor Bill Gross and neighbor Mark Towfiq over a $1 million garden sculpture all began when Towfiq rented out...
Read more