This was an opportunity for Arsenal. This was a chance to make a statement, to win a game of football and push themselves in to the top four of the Premier League and up on to the shoulders of defending champions Liverpool.

It is a position Arsenal have not occupied for too long so you would think there would have been a hunger about Mikel Arteta’s players, a desire to take a significant stride forwards.

But no, there wasn’t enough of that here at the Emirates. There was not nearly enough. 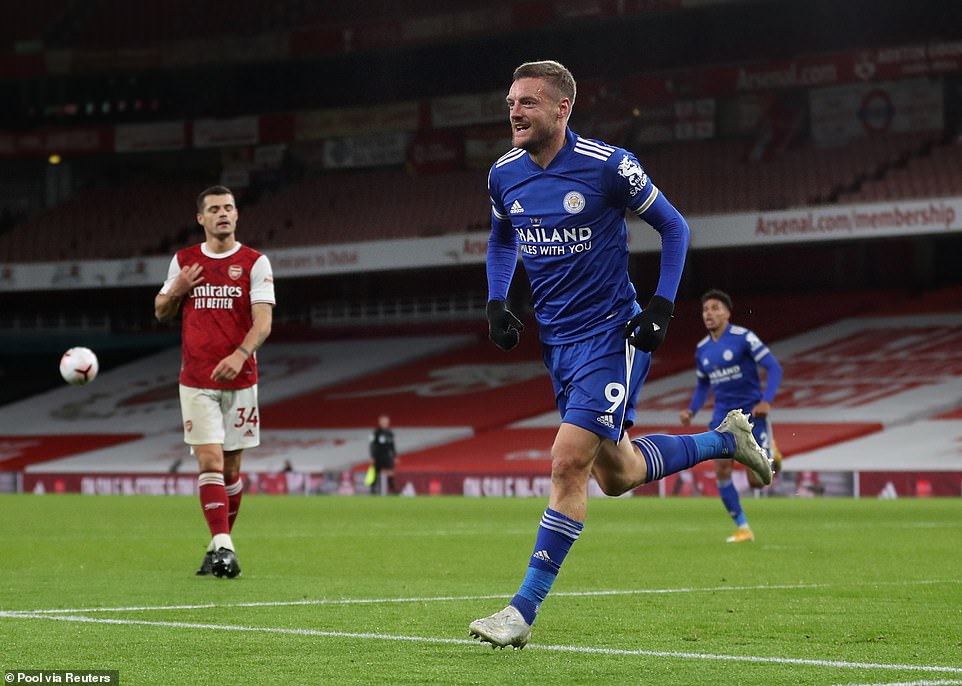 Jamie Vardy bagged the winner to continue his habit of haunting Arsenal on Sunday, as Leicester beat the Gunners 1-0 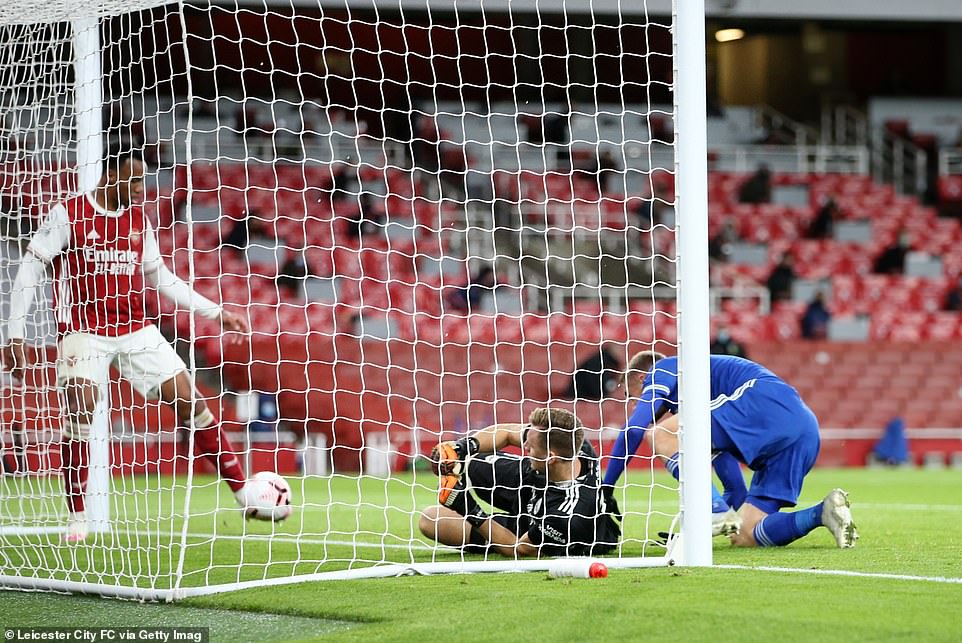 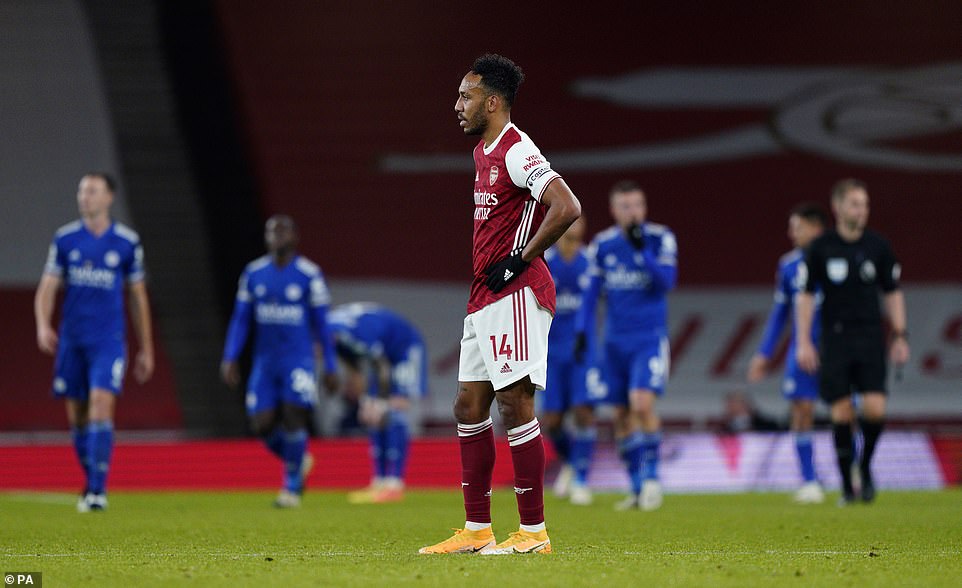 This was an Arsenal performance that spoke not of potential – of which there is a vast amount in this squad – but instead pointed to remaining, deep-seated limitations.

Arteta has improved his team and changed the culture of the club but on occasions you sense that he knows they will still let him down.

Here they were the better team for the first half but their star forwards didn’t show when Arsenal needed them to. Alexandre Lacazette didn’t want to put his head among flying boots when set up two yards from goal.

Pierre-Emerick Aubameyang, meanwhile, has not scored a league goal or indeed contributed a performance of note since signing his new contract.

It is not good enough and ultimately they were upstaged and undone by a forward who will never leave very much on the field.

MAN OF THE MATCH: Jonny Evans 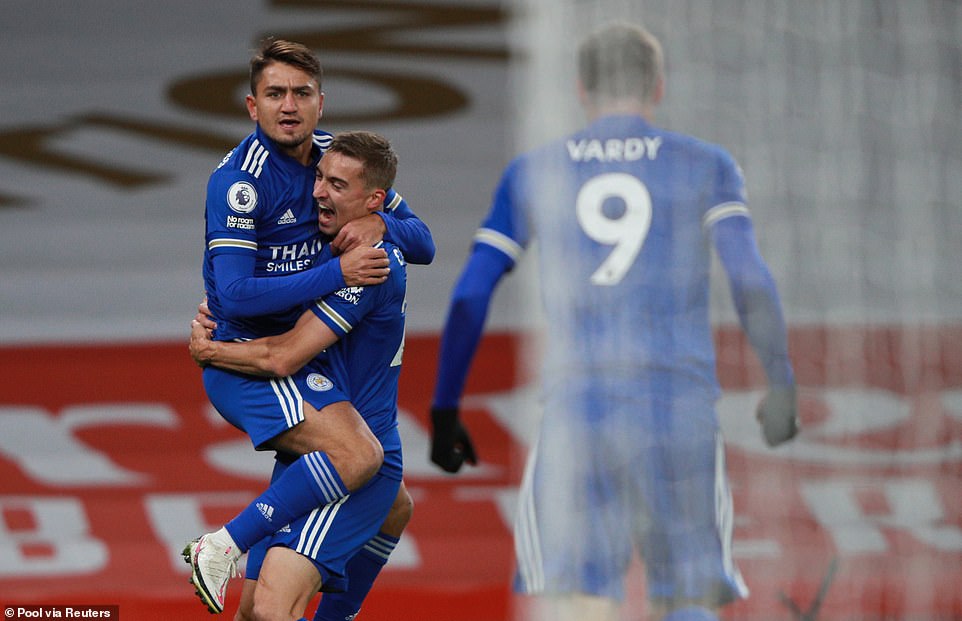 Cengiz Under assisted his fellow substitutes goal only minutes after coming on, stunning the hosts at the Emirates Stadium 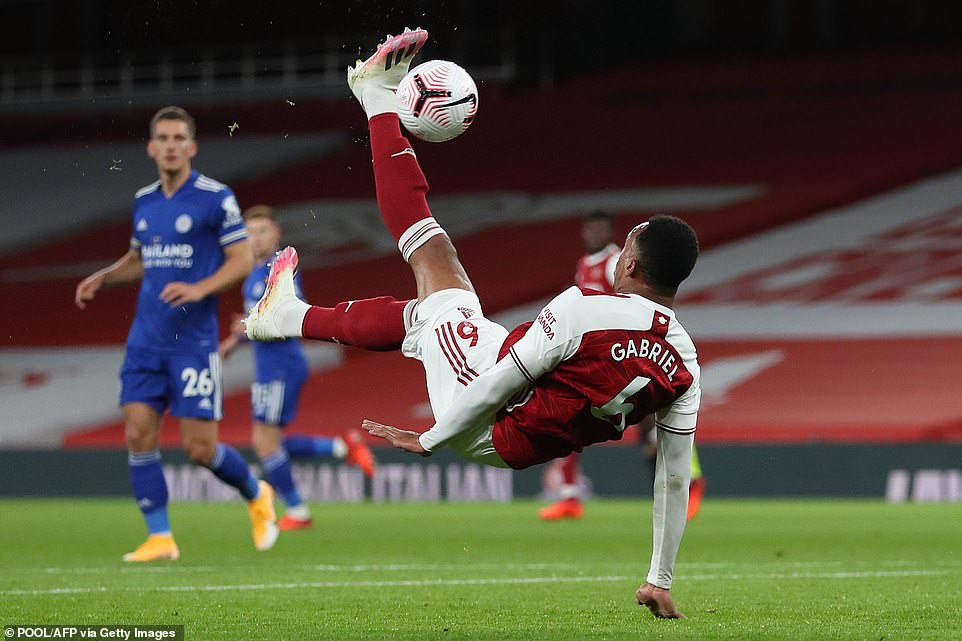 Arsenal were in complete control for most of the first-half but missed their chances, with Gabriel trying an overhead kick

Jamie Vardy did not start this game as Brendan Rodgers tried to protect him ahead of a rigorous schedule.

But the Leicester manager said Vardy would contribute against a club he once almost signed for and nearly always scores against, and that turned out to be the case. Vardy came on with half an hour left and scored the winning goal twenty minutes later.

Arsenal did have the ball in the net in only the fourth minute of the game and it was a strange affair. A corner from the left side was swung to the near post and headed in to the goal by Lacazette only for offside to be called.

Two Arsenal players – Granit Xhaka and Aubameyang – were standing in offside positions close to goal but neither touched the ball, meaning it must have been their proximity to goalkeeper Kasper Schmeichel that counted against them.

Certainly the goal could have been given. Equally James Maddison had lifted an effort just wide from 35 yards a couple of minutes earlier after a poor clearance from Bernd Leno. So maybe both teams were relieved not to be behind as they settled in to the early rhythm of the game. 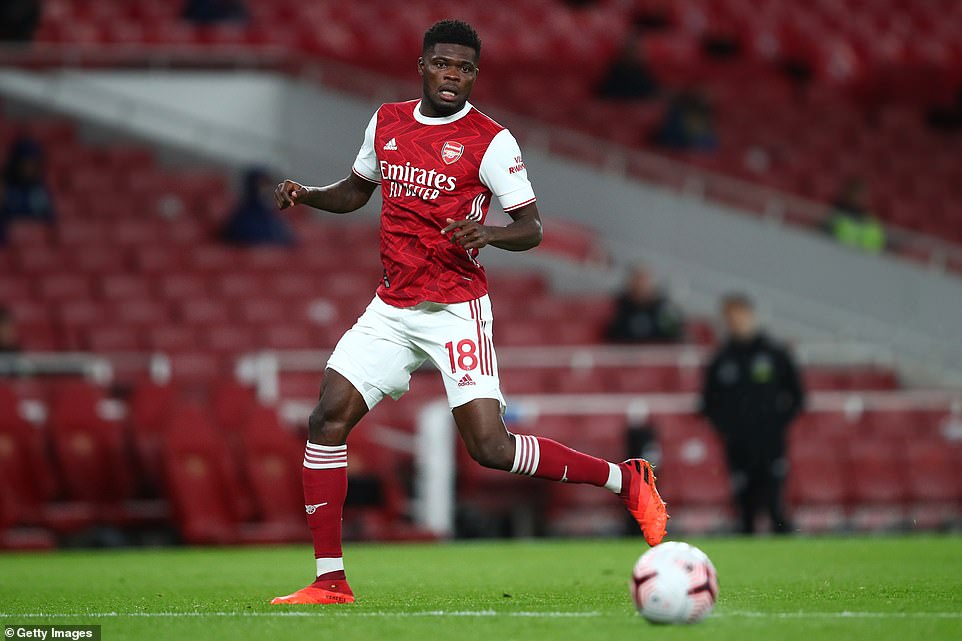 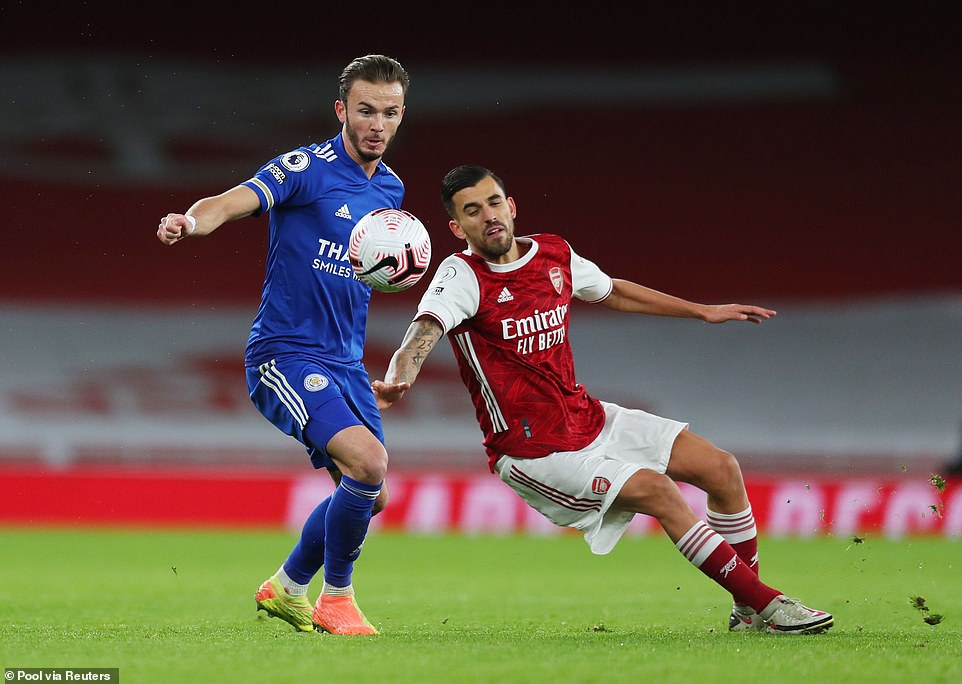 James Maddison started for the first time this season, putting in a good shift for the Foxes before being hauled-off

Ultimately it was Arsenal who grew in to the game the quicker. Leicester were relatively happy to sit deep but lacked the pace through the middle to be effective on the counter.

So with Arsenal pressing, Leicester had to defend well and by and large they did. Jonny Evans made up ground superbly on Hector Bellerin to block after a superb deep pass from David Luiz while Christian Fuchs was just as diligent.

Still Arsenal could and should have scored, though. Left-back Kieran Tierney was a menace with his delivery from that side and one such cross would have been headed in by Lazacette from just two yards had the Frenchman been brave enough to attack the ball properly. Instead, his rather lame effort only skimmed off his forehead.

That was the big chance of the first half and Arsenal’s control of play was due in no small part to the technical proficiency and game understanding of new signing Thomas Partey.

The Ghanaian used the ball beautifully at times, passing both long and short to good effect. 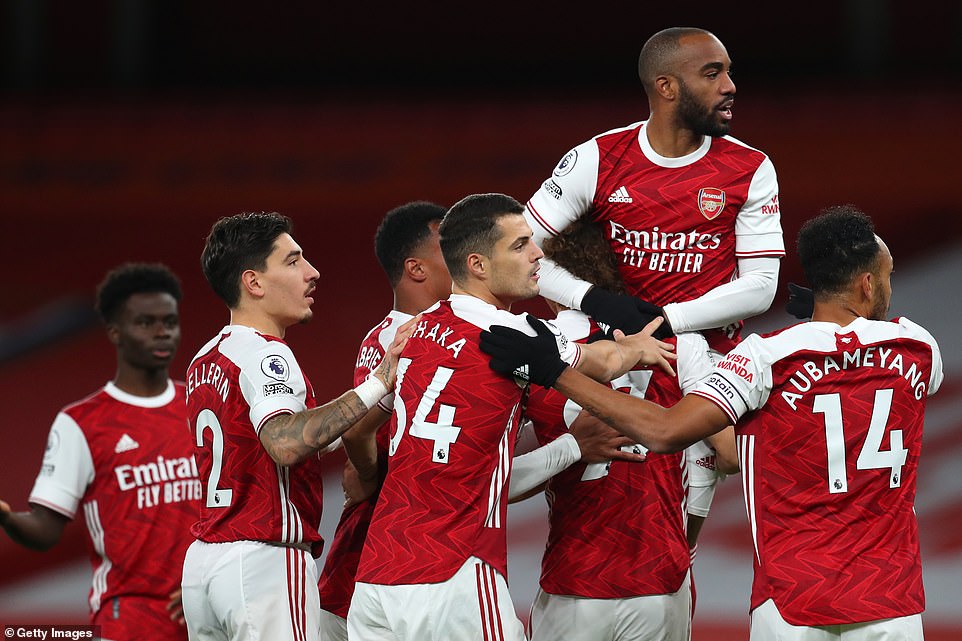 Alexandre Lacazette thought he had scored in the third minute from a Dani Ceballos corner, before it was quickly ruled-out 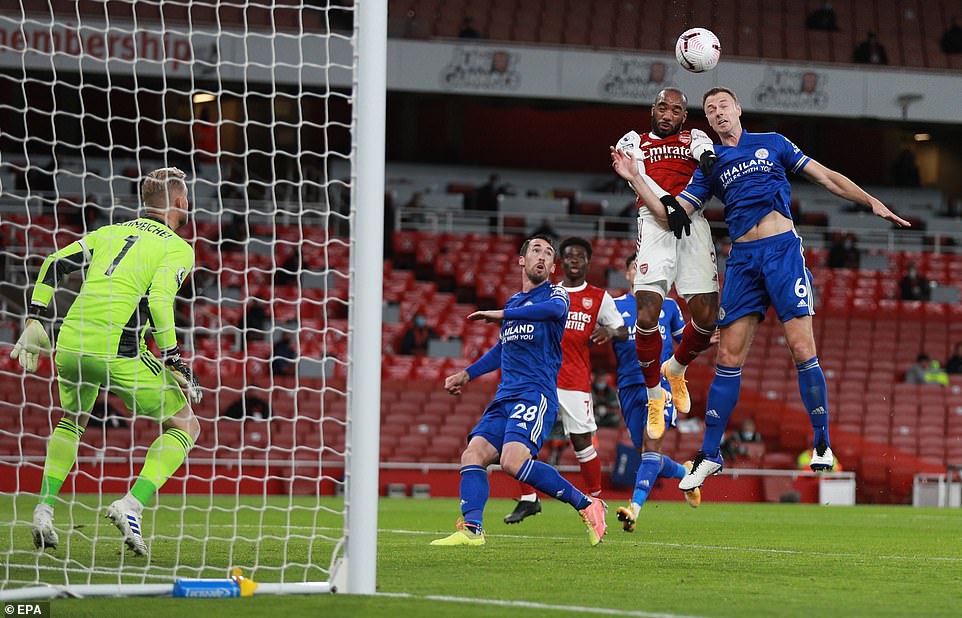 Lacazette had a handful of chances to score but couldn’t take them, getting booked in the second-half as frustration built 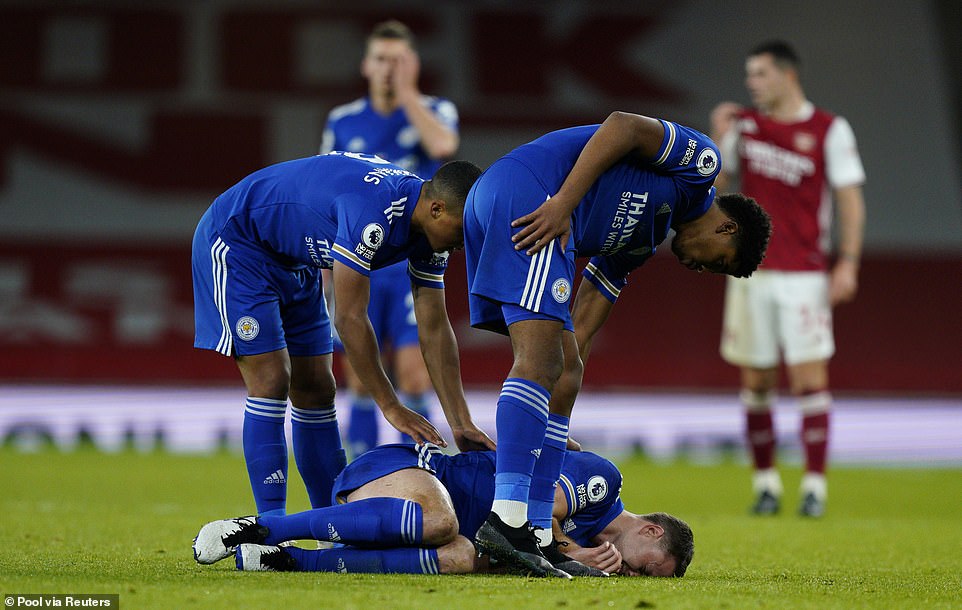 For Leicester the question was how long it would be before Vardy was given a run. As it turned out, he came on after an hour.

Arsenal had also made a change by then, an enforced one, after Luiz tweaked a muscle. Vardy may have been a little disappointed not to have a chance to run at the Brazilian who had enjoyed a good night with the ball but is not always comfortable on the turn.

Leicester, without a win in this part of north London since 1973, had certainly grown in to the game in the second half.

Arsenal all of a sudden seemed to lack a little focus and Arteta was certainly not getting enough out of his forward players. Perhaps with this in mind, Nicolas Pepe was sent on in the 65th minute to doubtless try and lift things a little.

It was Aubameyang who finally delivered some overdue threat. A run down the left produced a deep cross and Bellerin’s nicely controlled side footed volley was saved well by Schmeichel. 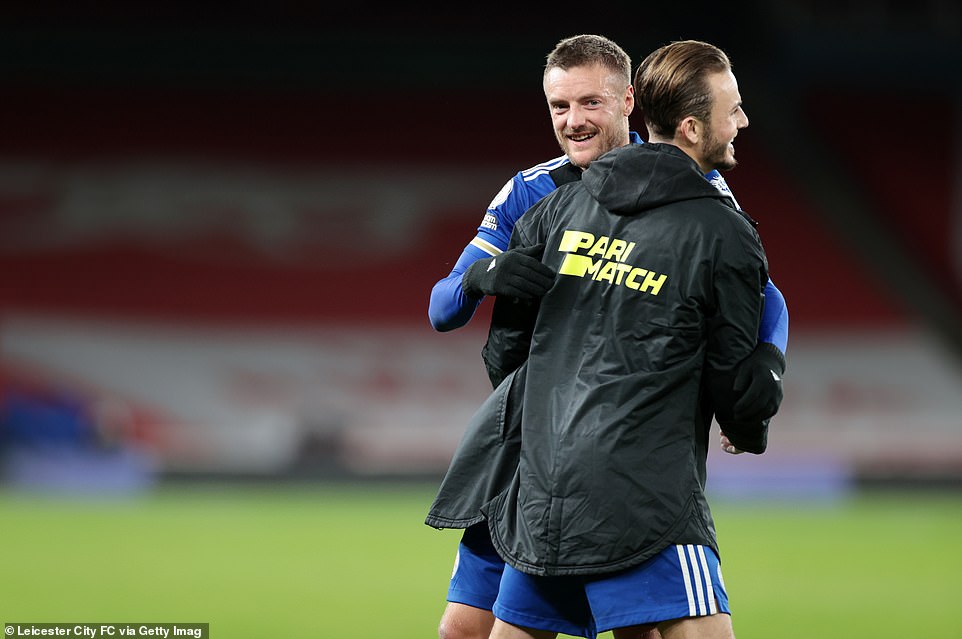 At last there was some life in the game. Hitherto in the second half there had been too little energy and ambition, especially from a home team that will have to play better than this if they are to seriously threaten the top four places.

Then, with ten minutes to go, Leicester finally got them. A lovely long pass from Youri Tielemans found one substitute, Cengiz Under, streaking through down the left and another, Vardy, inside him.

A simple square pass was all that was required and when it arrived Vardy stopped to head the ball in to the empty net.

He could have scored another in added time but was denied by Leno. It didn’t matter. When the lights went out, it was Leicester – and not Arsenal – sitting in the Champions League places.