Scientists have discovered evidence of the oldest use of bows and arrows by prehistoric humans outside of Africa, in a cave in Sri Lanka.

Fragments of arrowheads, made from the bone of boar, deer, primates and other creatures, were used to hunt tree-dwelling animals at least 45,000 years ago.

The preserved shards, found in the cave of Fa-Hien Lena to the southwest of the Asian island, helped hunters catch speedy rainforest monkeys and squirrels.

An international team of archaeologists say the arrow fragments are older than any evidence of similar technology found in Europe.

Also found among the bone tools were artefacts shaped as awls or scrapers, usually associated with the working of clothes or fibres for fishing nets.

Other artefacts found at the site include coloured beads produced from mineral ochre and the decorative shell beads, likely traded from the coast.

The island of Sri Lanka in the Indian Ocean, just south of the Indian subcontinent, is home to the earliest fossils of our species, Homo sapiens, in South Asia. 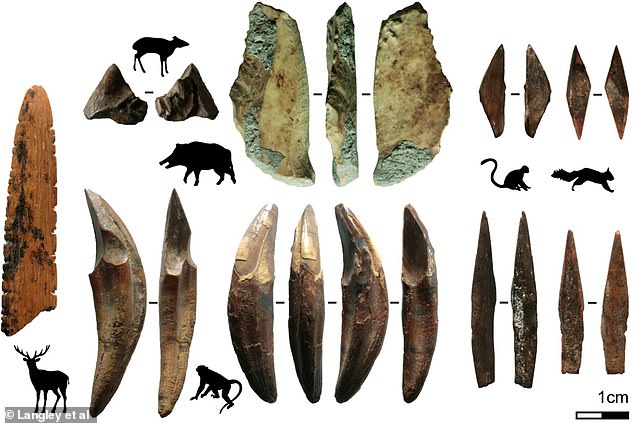 Fa-Hien Lena has emerged as one of South Asia’s most important archaeological sites since the 1980s, preserving remains of our species, their tools, and their prey in a tropical context. There are also other bone tools, in addition to the projectile points, that are shaped as awls or scrapers which are usually associated with the working of hides (clothes) or fibres (nets) 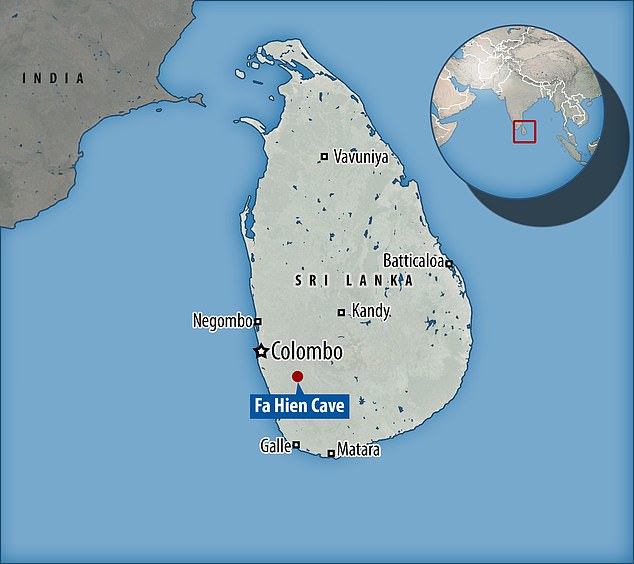 The new study saw scientists turn to the beautifully preserved material culture from the cave of Fa-Hien Lena, deep in the heart of Sri Lanka’s Wet Zone forests

The study provides the earliest evidence for bow-and-arrow use, and perhaps the making of clothes, outside of Africa, dating back around 45,000 to 48,000 years ago.

This evidence of ‘projectile technology’, personal ornamentation and long-distance social networks in a tropical rainforest offer new insight into how early Homo sapiens adapted to diverse, extreme environments as they spread across the globe.

The question as to exactly how humans obtained rainforest resources – including fast-moving food sources like monkeys and squirrels – remains unresolved, however.

‘The Sri Lankan evidence shows that the invention of bows-and-arrows, clothing, and symbolic signalling occurred multiple times and in multiple different places, including within the tropical rainforests of Asia,’ said co-author Michael Petraglia of the Max Planck Institute for the Science of Human History (MPI-SHH) in Germany.

‘In addition to insulation in cold environments, clothes may have also helped against tropical mosquitoes.’

Asia, Australasia, and the Americas have often been side-lined in discussions of the origins of material culture, such as novel projectile hunting methods, which have focused on the grasslands and coasts of Africa or the temperate environments of Europe.

More extreme environments, such as the tropical rainforests of Asia, have been largely overlooked, despite their deep history of human occupation. 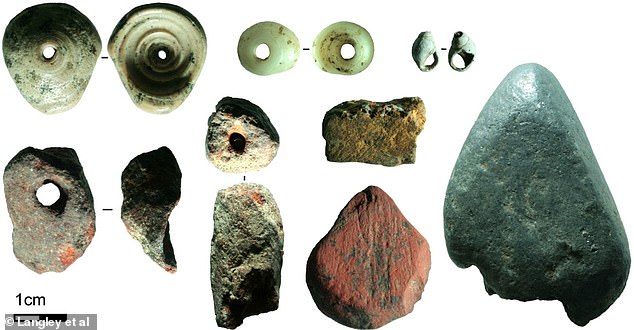 Humans occupied and adapted to extreme environments as they migrated beyond Africa, including into deserts, high-altitude settings and tropical rainforests, such as those of Sri Lanka in the Indian Ocean, just south of the Indian subcontinent.

The international team of scientists, from Germany, Australia and Sri Lanka, studied materials taken from the cave of Fa-Hien Lena, deep in the heart of the island’s Wet Zone forests.

The cave is legendary for being the home of Late Pleistocene human fossilised skeletal remains, which were discovered in the cave’s sediments during excavations in the 1960s and the 1980s.

‘Fa-Hien Lena has emerged as one of South Asia’s most important archaeological sites since the 1980s, preserving remains of our species, their tools, and their prey in a tropical context,’ said co-author Oshan Wedage at MPI-SHH.

The bone tools and artefacts analysed for this study were recovered during the 2009 to 2012 excavations of Fa-Hien Lena. 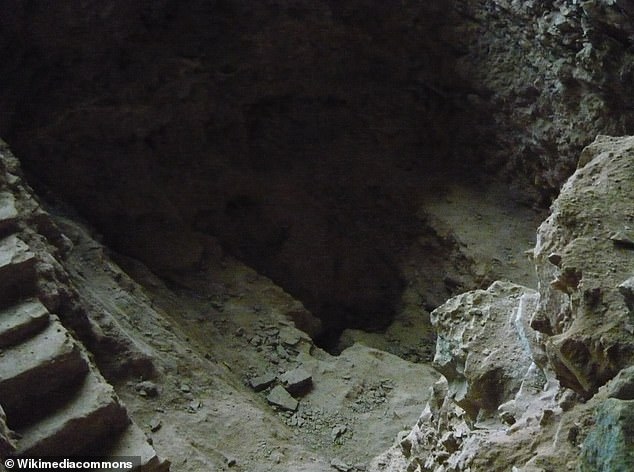 Shot of the Fa Hien Cave, also known as the Pahiyangala Cave. The bone tools and artefacts analysed for this study were recovered during the 2009 to 2012 excavations of Fa-Hien Lena

Some of the main finds from the site include single and doubled-pointed bone tools that scientists had suspected were used to kill prey and make use of other natural resources.

All artefacts were then examined using a stereo microscope fitted with an AxioCam 105 camera, which showed direct traces of their original use.

‘Fractures on the points indicate damage through high-powered impact – something usually seen in the use of bow-and-arrow hunting of animals,’ said lead author Michelle Langley of Griffith University in Queensland, Australia.

‘This evidence is earlier than similar findings in Southeast Asia 32,000 years ago and is currently the earliest clear evidence for bow-and-arrow use beyond the African continent.’ 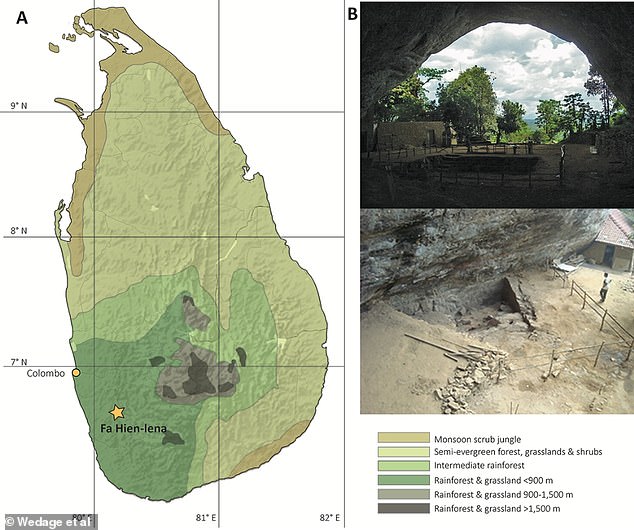 Applying the same microscopy to other bone tools, the team identified implements which seem to have been associated with freshwater fishing in nearby tropical streams, as well as the working of fibre to make nets or clothing.

Rather than protecting the body from the cold, evidence suggests that clothing was deliberately made to suit the circumstances – as a layer of protection from insect-borne disease.

The new study is part of a growing awareness that many regions of the world saw extraordinary and complex new technologies emerge at the end of the Palaeolithic period.

‘Humans at this time show extraordinary resourcefulness and the ability to exploit a range of new environments, said co-author Nicole Boivin, director at the MPI-SHH.

‘These skills enabled them to colonise nearly all of the planet’s continents by about 10,000 years ago, setting us clearly on the path to being the global species we are today.’

The study has been published in Science Advances.

TOOLS OF THE PALEOLITHIC PERIOD

The onset of the Paleolithic Period has traditionally coincided with the first evidence of tool construction and use by Homo some 2.58 million years ago, near the beginning of the Pleistocene Epoch (2.58 million to 11,700 years ago).

At sites dating from the Lower Paleolithic Period (2,580,000 to 200,000 years ago), simple pebble tools have been found in association with the remains of what may have been some of the earliest human ancestors.

A more-sophisticated Lower Paleolithic tradition known as the Chopper chopping-tool industry is widely distributed in the Eastern Hemisphere and tradition is thought to have been the work of the hominin species named Homo erectus.

About 700,000 years ago a new Lower Paleolithic tool, the hand ax, appeared.

The earliest European hand axes are assigned to the Abbevillian industry, which developed in northern France in the valley of the Somme River.

A later, more-refined hand-axe tradition is seen in the Acheulean industry, evidence of which has been found in Europe, Africa, the Middle East, and Asia.

The Upper Paleolithic Period (beginning about 40,000 years ago) was characterised by the emergence of regional stone tool industries, such as the Perigordian, Aurignacian, Solutrean, and Magdalenian of Europe.

European hamster now 'critically endangered' and one step away from extinction, experts warn

SARS-CoV-2 is 1,000 TIMES better at infecting human cells than its closest relative found in bats