A fifth state of matter, known as a Bose-Einstein condensate (BEC), has been created in the microgravity of the International Space Station for the first time.

This exotic and rare form of matter is only produced when a gas of boson like particles are cooled to temperatures just above absolute zero (about -459.67F).

Creating the exotic matter on the ISS makes it easier to study its properties in a way that wouldn’t be possible on Earth, due to the effects of gravity on atoms.

NASA researchers say exploiting the microgravity environments of space gives them a chance to ‘explore fundamental physics in this exotic form of matter’. 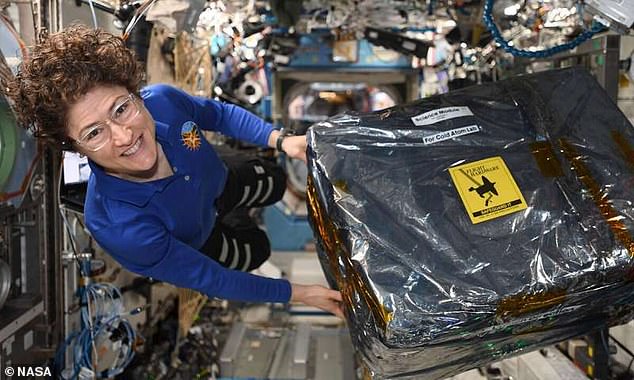 Creating the exotic matter on the ISS makes it easier to study its properties in a way that wouldn’t be possible on Earth, due to the effects of gravity on atoms. Astronaut Christina Koch unloaded the new lab in 2018 when it arrived on board the station

At the incredibly low temperature required to produce Bose-Einsten condensates, the atoms become a single entity with quantum properties.

As such, they may offer fundamental insights into quantum mechanics, but measuring them precisely is hampered by gravity when made on Earth.

They are classed as a fifth form of matter after plasma, gas, liquid and solid but only certain types of boson like particles can turn into a BEC state.

This exotic type of matter has been made on Earth for 25 years – the first was produced in June 1995 – but gravity has made it harder to study.

Lasers operating in a vacuum chill clouds of a few million atoms and it does so at temperatures colder than those found in space.

Atoms are usually arranged in a certain order to create a liquid, solid, gas or plasma – but in 1925 Albert Einstein and Satyendra Nath Bose said cold enough atoms would lose their individuality.

At these temperatures atoms stop acting as individuals, they blob together and this blob presents an easier way for researchers to study the quantum world – that is the realm smaller than an individual atom.

Atoms inside a BEC follow quantum laws but as they’ve blobbed together they are large enough to be viewed – unlike atoms in other forms of matter.

To overcome observation limitations on Earth, Robert Thompson and colleagues from NASA led a mission to launch a Cold Atom Lab to the ISS in 2018.

A Cold Atom Lab is required to produce a Bose-Einstein Condensate as it can drop to near absolute zero temperatures and force the boson gas to change state.

They found that, unlike on Earth, BECs produced in microgravity allow atoms to be measured and observed in free form for longer – due to gravity not pulling them. 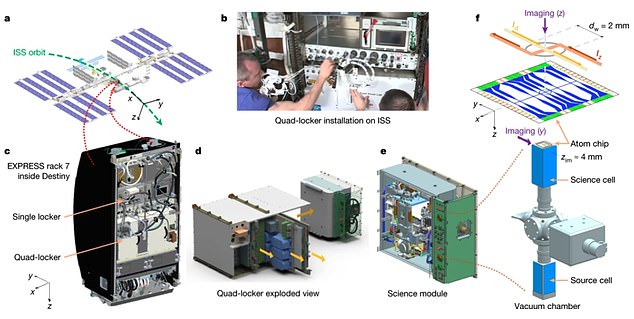 To overcome observation limitations on Earth, Robert Thompson and colleagues from NASA led a mission to launch a Cold Atom Lab to the ISS in 2018. This complicated equipment is mainly operated remotely and can produce Bose-Einsten condensation consistently

‘Microgravity allows us to confine atoms with much weaker forces, since we don’t have to support them against gravity,’ lead author Robert Thompson of from the California Institute for Technology and NASA, told AFP.

‘Most importantly we can observe the atoms as they float entirely unconfined (and hence unperturbed) by external forces,’ Thompson said.

By creating the matter in space they were able to extend free form observation time to longer than one second, compared to tens of milliseconds achievable on Earth.

In addition, under microgravity conditions atoms can be trapped by weaker forces, making it possible to reach lower temperatures, at which exotic quantum effects become increasingly more prominent.

Not only has the Cold Atom Lab on the ISS created BECs in microgravity but it has been able to do so consistently.

Atoms are usually arranged in a certain order to create a liquid, solid, gas or plasma – but in 1925 Albert Einstein and Satyendra Nath Bose said cold enough atoms would lose their individuality and clump together. They called the resulting matter Bose-Einsten condensate – here it can be seen under the microscope after being created on the ISS

‘It was recognized early on that microgravity would come in handy, and going to space would give us a lot of advantages in terms of measurement time,’ David Aveline, the lead author, told Business Insider.

‘We’re getting to make BECs on a daily basis, for many hours a day,’ Aveline said.

‘CAL is completely remote-controlled. We’re running it from computers on the ground, literally inside our living rooms.’

These initial experiments show that the space-borne laboratory can facilitate future studies of ultra-cold atomic gases.

He said it would also be important for the study of ‘atom interferometry’ and paves the way for even more ambitious missions’ in the future.

The findings have been published in the journal Nature.

A Bose-Einstein condensate (BEC) is known as the fifth state of matter, after solid, liquid, gas and plasma.

It is formed at a fraction above absolute zero and only in atoms that act like bosons, one of two types of fundamental particles.

When bosonic atoms are cooled to form a condensate, they can lose their individuality.

They behave like one big collective superatom, a bit like how photons become indistinguishable in a laser beam.

The first BEC was shown experimentally almost 25 years ago by researchers at the University of Colorado Boulder in the US.

'Nothing to do with them' Donald Trump sparks fury as President...

'Nothing to do with them' Donald Trump sparks fury as President...