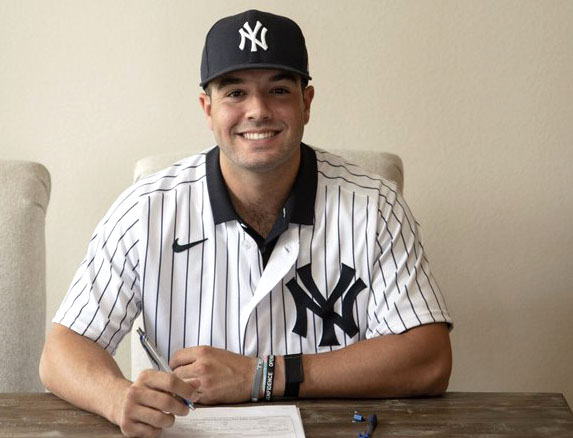 “Officially a Yankee!’’ Wells, the 28th-overall pick in the first round of the 2020 MLB Draft, posted to his Twitter account with a photo of him wearing a Yankees cap and pinstripe jersey.

The 20-year-old catcher — who originally was drafted by the Yankees in the 35th round in 2018 before deciding to play at Arizona — agreed to a $2.5 million bonus, according to YES Network. That just about matches the $2,493,900 recommended slot value of his selection.

Wells said after the draft the potential negative impact the coronavirus would have on the minor league season this season was not a factor in his decision to turn pro and forego a third year with Arizona.

“Honestly, the decision was up to where I got drafted and what the program was,’’ said Wells, a left-handed hitter. “I don’t think whether or not there was minor league games was the decision-maker if I was going back to college or not.

“I think it was the best fit for me to move on, go forward and be a Yankee.’’

Wells had an impressive career at Arizona. He had a dominant first season with the Wildcats, slashing .353/.462/.552, becoming the first Arizona player to be named Pac-12 Freshman of the Year.

Before the coronavirus pandemic cut his sophomore campaign short, Wells was batting .375 with a .527 on-base percentage.  He finished his 1½-season college career with 99 hits, seven home runs and 74 RBIs.

Yoenis Cespedes’ ‘good day’ in field, at plate for Mets had one omission

Donald Trump threatens China for ‘great damage’ caused to US and...

Tourism industry will be unpredictable for a very long time, Conde...

China lashes out at Britain: 'Hong Kong is no longer under...

Uber to buy food-delivery service Postmates for $2.65 billion in stock

Donald Trump threatens China for ‘great damage’ caused to US and...

Tourism industry will be unpredictable for a very long time, Conde...