How to make banana bread with THREE ingredients: Home cook’s simple recipe wows hundreds – and it tastes just like one you’d try in a cafe

Australian bakers are raving about a simple recipe for banana bread made from three supermarket ingredients in a slow cooker.

All that’s needed are five ripe bananas, two and a half cups of self-raising flour – roughly 300 grams – and a tin of condensed milk, beaten together into a smooth batter.

The mixture should be poured into a cake tin lined with grease-proof paper and left to bake in a slow cooker – which cost $19 at Kmart – on a ‘high’ heat for two hours.

About three centimetres of water should be poured into the base of the cooker to lock in moisture and ensure the bread bakes evenly throughout, with a tea towel slipped under the lid to absorb condensation. 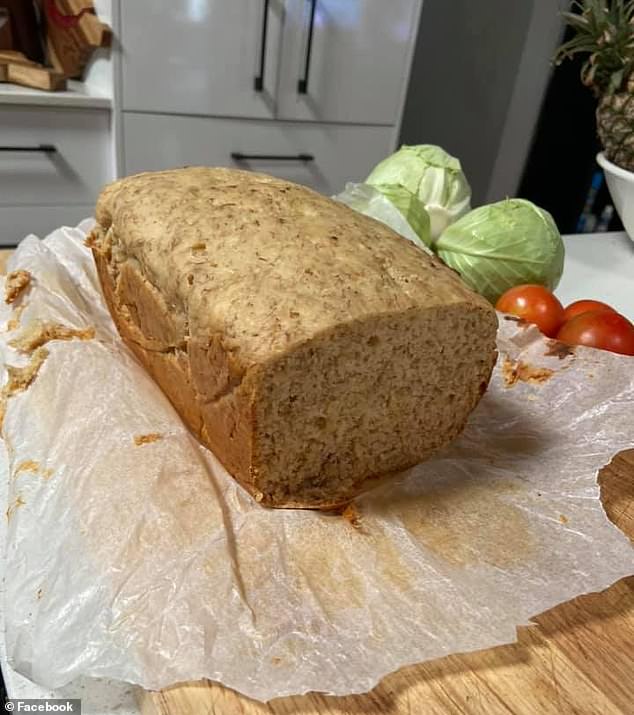 This banana bread is made from five bananas, a tin of condensed milk and about 300 grams of self-raising flour

Chefs call this a ‘bain marie‘, the French term for ‘water bath’.

Added moisture from the water prevents the surface of cakes from cracking in much the same way as moisturisers hydrate and strengthen skin.

Photos of the three-ingredient banana bread have drawn delighted responses since they were posted in a Facebook cookery group on Tuesday, with comments including ‘so yummy’, ‘delicious’ and ‘looks great’.

‘I’ve made this a few times, works out well,’ one woman confirmed.

How to make it

1. Beat all ingredients into a smooth batter

2. Pour into a lined cake tin

3. Fill the base of a slow cooker with 3cm of water and place the tin inside.

4. Slip a tea towel under the lid and cook on ‘high’ for two hours.

A second said she planned to make it for her children over the weekend, while a third added: ‘This recipe is awesome!’

Many recommended serving it with melted butter and golden syrup for added flavour.

Others said they added a tablespoon of cinnamon to the mixture to give the bread a sweet yet spicy kick.

The bread could also be filled with chocolate chips or crushed walnuts to enhance the texture.

A father has been branded 'disgusting' over footage of him teaching his six-year-old son to trophy hunt by dressing up as a deer so...
Read more
U.S

A COVID-denier mom who claim masks are 'child abuse' threw a 250-person homecoming party for her teenage daughter and her classmates because she...
Read more

Progressive lightning rod Rep. Alexandria Ocasio-Cortez and GOP Sen. Ted Cruz clashed on social media over which party is to blame for a...
Read more

Stress-free Black Friday: How to get the best deals straight to your inbox

We’re sifting through the sales to uncover what really is a bargain to give you a stress-free Black Friday 2020. Plus we’ll be...
Read more
Load more