Home U.S Bear peers into the living room of a house in Sierra Madre,...
U.S

Bear peers into the living room of a house in Sierra Madre, California

‘Can I help you?’ Homeowner keeps her cool as curious bear paws door and peeks inside her California house

A curious bear surprised a Californian woman by pawing on her sliding door to peek into the room on October 16.

‘Can I help you?’ Dukes can be heard saying as she films the moment the bear stands on its hind legs to put its paws on the door peek inside. 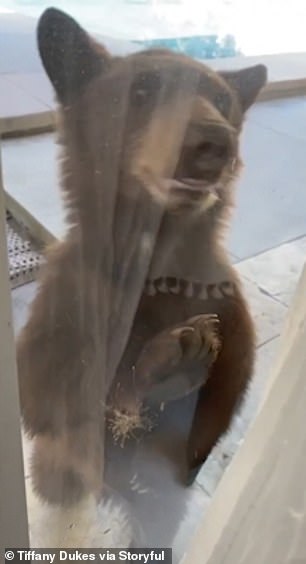 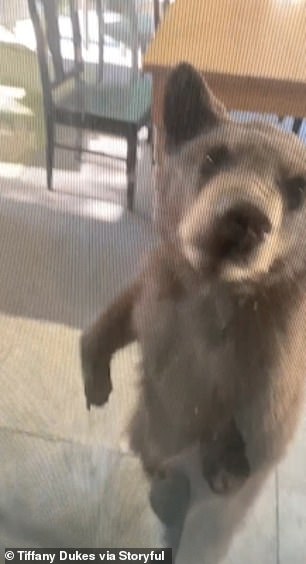 This bear walked up to Tiffany Dukes’ back door in Seirra Madra, California. She said she noticed more bears in the area since the start of the Covid-19 pandemic 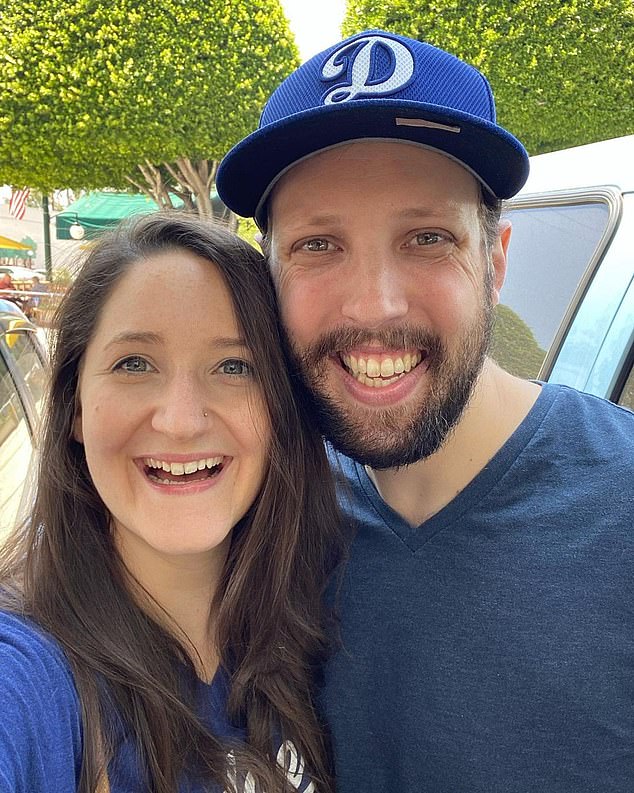 Tiffany Dukes, left, pictured with her partner Kevin Kress, right, believes the bears may have been disturbed by the recent Bobcat fire which hit the Angeles National Forest 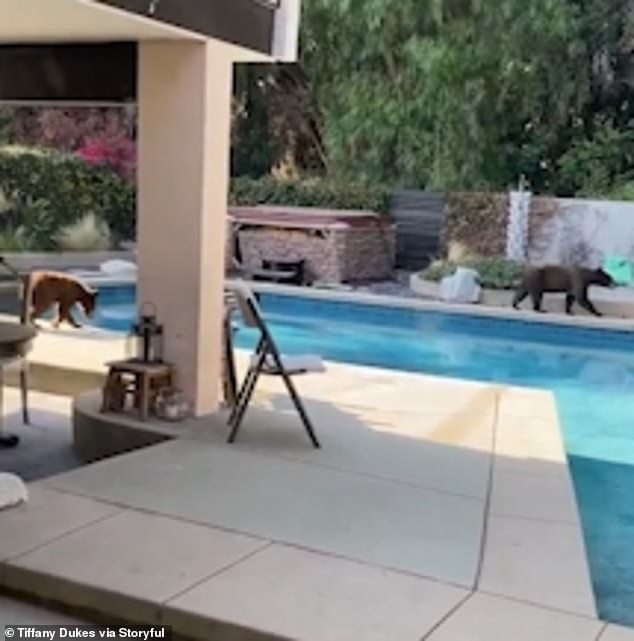 At one stage, one of the bears tested out the water in the swimming pool.

Dukes claimed she saw bears slowly walking near her house frequently since the COVID-19 shutdown.

She said she’s living near Angeles National Forest, which is known for bear activities. Dukes observed that the recent Bobcat Fire had forced an influx of wildlife into her town.

In an interview with ABC-7 she said: ‘I was sitting on the couch when it happened, working, and I look up and I saw the teenage bear walking past the door. It comes over to the other door, which was cracked open, so I just ran over — and my adrenaline’s pumping — I shut it, lock it really quick and scared that one away.

Moments later she spotted a second bear. She said: ‘That’s when the baby jumped up on the window. Really obviously wanted to come inside. She’s really cute. Kind of scared it off a little bit, but then it went and took a drink in the pool and climbed the wall.’

She said she first saw the bears last week but has not seen their mother.

Numerous studies have linked bigger wildfires in America to climate change from the burning of coal, oil and gas. Scientists have said climate change has made California much drier, meaning trees and other plants are more flammable.

It has been a disastrous wildfire season in California, with more than 8,500 blazes burning more than 6,400 square miles since the start of the year. Thirty-one people have died and some 9,200 buildings have been destroyed.

Most of this year’s fires have occurred since mid-August, when an unusual siege of thousands of lightning strikes ignited huge blazes.

The causes of two fires that broke out in September remain under investigation.

Electricity supply equipment is being investigated as causing the Bobcat Fire.

Covid vaccines are like buses. You wait all year for one, and then three come along at once. OK, so Christmas cracker jokes aside...
Read more
U.S

A leading travel industry association is developing a digital passport for international plane passengers who have been vaccinated for COVID-19. The International Air Transport...
Read more
U.S

The Duchess of Cambridge has joked she would 'like to ask the experts' for advice on handling her children's tantrums while answering early...
Read more

Longing for a hotel break with a restaurant, spa or tennis courts but still want a bit of distance between you and other...
Read more