Democrat Joe Biden’s campaign bought the website TrumpCovidPlan.com to make the point that President Donald Trump doesn’t have a plan to defeat the coronavirus.

The URL leads to what looks to be a broken page that reads, ‘Not Found. The Trump plan to defeat the coronavirus and reopen safely does not exist.’ It then includes a timeline of Trump’s alleged ineptitude.

The website and a speech the Democratic nominee gave from Delaware Friday has Biden doubling down on making the coronavirus the center of his campaign after clashing with Trump on the president’s handling of the pandemic at Thursday night’s debate. 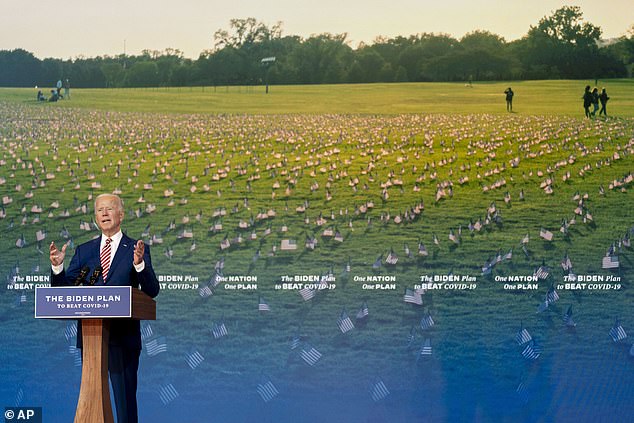 Joe Biden’s campaign bought the URL TrumpCovidPlan.com, which brings web users to a page that says ‘Not Found’ and ‘The Trump campaign to defeat the Coronavirus and reopen safely does not exist’ 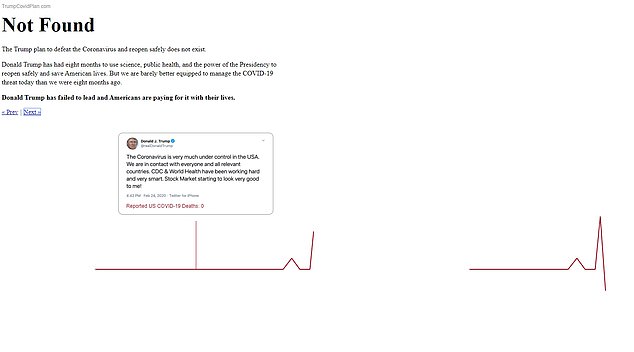 There, Trump claimed that Biden wanted to shut down the economy.

On Friday, speaking from the Queen theater in his adopted hometown of Wilmington, Biden repeated his response from Thursday night’s debate.

Biden started his remarks by calling Trump’s sunny picture of where things stand with COVID-19 a lie.

‘Last night we saw the president of the United States lie to the American people, and repeatedly lie, about the state of this pandemic,’ Biden said.

He also said the Trump ‘diminish[ed] the pain felt by so many Americans.’

The ex-vice president made sure to repeat several of his favorite debate lines.

‘But as I told him last night, we’re not learning to live with it, we’re learning to die with it,’ Biden said, adding, again, ‘This is a dark winter ahead.’

Biden recalled how he had said in June that Trump was seemingly waving the ‘white flag of surrender’ with the virus. 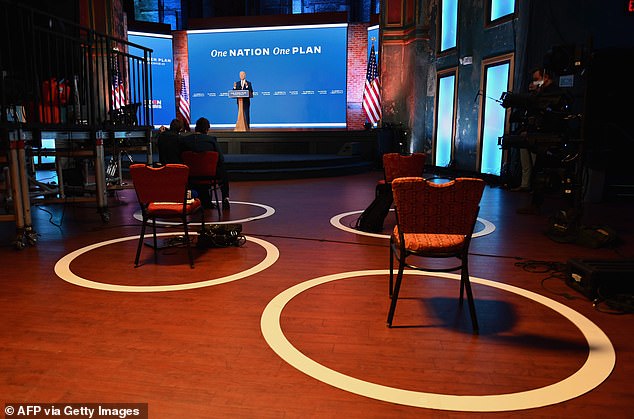 Joe Biden repeated some of his best lines about the coronavirus from Thursday’s debate during his speech Friday at the Queen theater in Wilmington, Delaware

After semi-backing a widespread closure for 45 days in the spring, Trump harassed the states into opening back up quickly, with some rushing through the gating requirements spelled out by the country’s health experts.

‘It’s as if he decided to go on offense for the virus,’ the former vice president pointed out.

‘Holding rallies with no masks, no social distancing, where people contracted the virus, inviting the virus into the White House, hosting what Dr. Fauci [a] called superspreader event, endangering more people’s lives by telling the public, don’t worry, don’t worry about the disease, don’t let it dominate you,’ Biden said.

‘The longer Donald Trump is president the more reckless he gets,’ Bidens scoffed. ‘We don’t have to be held prisoner by this administration’s failures.’

The ex-veep then pointed to some of his plans.

He continued to push widespread mask-wearing, including punishing people for not wearing them on federal property, something he had floated in the past.

Biden called it a point of ‘patriotic pride.’

‘So we can pull our country out of this God-awful spiral we’re in,’ he said.

Biden repeated his plan to provide schools with the funding they’d need to reopen safely. And he floated giving American businesses a ‘restart package’ to they could safely reopen too.

He also pointed to the Trump-backed lawsuit going to the Supreme Court that could overturn Obamacare, claiming that this could hinder Americans’ ability to get free vaccines.

The Trump campaign disputed this.

Biden said if elected he would start crafting a COVID-19 bill during the transition so it was ready to go just days into his tenure.

‘I’ll ask the new Congress to put a bill on my desk by the end of January with all the resources to see how both our public health and economic response can be seen through the end, what is needed,’ Biden pledged.

Dr. Anthony Fauci has confirmed that ordinary healthy Americans will not get their coronavirus vaccine until April, as he warned that the worst...
Read more

If the dizziness is accompanied by feeling or being sick and off-balance, you may have labyrinthitis.If you have hearing loss, double vision, blurred...
Read more
Load more

'Havana Syndrome' – could be the result of a microwave energy...