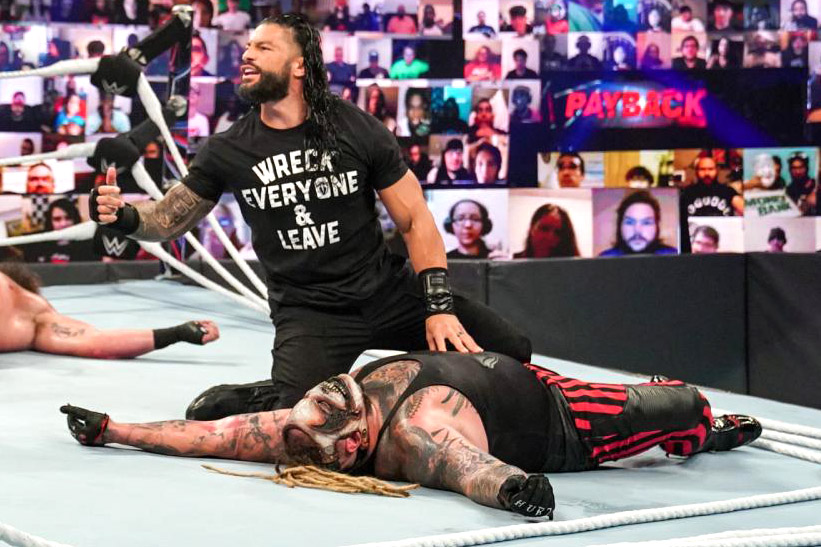 Roman Reigns is becoming everything he used to hate and it needs to continue — all the way to WrestleMania 37 against Big E.

Reigns returned to the ring for the first time since March to reclaim the Universal championship at the Payback pay-per-view on Sunday night at WWE’s ThunderDome in Orlando. He did so in a way that shows WWE is taking no chances with his long-awaited heel turn. It was Brock Lesnar-esque with Paul Heyman by his side.

Reigns, who hid in his locker room for most of the show and let Heyman do the talking, didn’t sign the contract for or enter the triple-threat match until after “The Fiend” Bray Wyatt and Braun Strowman collapsed the ring with a superplex. (Between that and Fiend’s mallet, this match was full sports entertainment, physical and fun).

Out came Reigns and Heyman, as if someone inserted the Big Dog into Lesnar’s entrance in WWE 2K20 (except it didn’t freeze.) After the Fiend kicked out of two covers as a way to protect him, Reigns finally speared and pinned Strowman to become champion again. He did so using a shortcut the old version of Reigns would never take. The show ends with Reigns and Heyman looking back at the ring from the ramp with satisfaction in a scene that seemed more familiar than new.

Lesnar’s character is despised by the WWE universe and Reigns railed against his part-time status and laziness during the build to their WrestleMania matches. Then he vowed to everything Lesnar wasn’t. Now let him become everything he once hated.

Have him refuse to wrestle some nights. When he does step in the ring, he should be asking for some sort of special treatment or provision. Reigns could cheat to win or just run people over with an intensity and dominance we’ve only seen from Lesnar. It gives Reigns a chance to turn even his biggest supporters against him.

There should be one huge difference from Lesnar. Don’t let Heyman become Reigns’ complete mouthpiece. Reigns is a good promo. The advocate should just complement him and be his guide to beating the system in order to stay champ.

The Fiend, who still has a Beauty-and-the-Beast type storyline to play out with Alexa Bliss, will have to suffer a bit, but Reigns needs to keep the belt for a long as possible. Passing it back and forth helps no one, especially when you are trying to build heat around Reigns. Also, who wouldn’t want to potentially see Reigns versus Drew McIntyre at Survivor Series?

The right foils are key. One of the issues with Reigns’ babyface title runs were his opponents. They were either not disliked enough by the audience or average at best in the ring. It led to some flat feuds and less-than-main-event-quality matches. WWE can’t make that mistake again.

All of this should lead to a WrestleMania 37 match with Big E, maybe via a Royal Rumble or Elimination Chamber win. What better position to put Reigns in than against one of WWE’s uber babyfaces, the guy everyone has been waiting for to get a singles title run. Heel Reigns is the perfect roadblock and those two will likely have one heck of a match as the crowd (maybe virtually) chants “New Day rocks!” and “Roman sucks!” Just imagine the pop for a Big E win if fans return.

There are plenty of ways to enhance this feud, but all of them include the return of Kofi Kingston and Xavier Woods to help Big E.

One, Jimmy and Jey Uso also return to aide their cousin Reigns to leave Big E (who beat Sheamus at Payback) laying, forming a heel faction and sparking the rest of New Day to come back. Or, Reigns is behind Retribution. They beat down Big E and a show ends with Reigns holding the belt high with Heyman and Retribution by his side forming what looks like an unstoppable force. Big E and the New Day would eventually rally the locker room to take on the formidable group.

— While the United States championship continues to be the ultimate hot-potato title, continuing to put over the Full Lashley finisher is not a bad thing.

— Time will tell, but I’m not sure which angle is worse — drunk-driving accused Jeff Hardy being called a “junkie” or admitted-to-an-affair-in-real-life Matt Riddle being called “a failure at home” as part of his storyline with Baron Corbin.

— Shayna Baszler using Sasha Banks’ arm to finally submit Bayley to win the WWE women’s tag team championships was an amazingly creative finish. Baszler is an artist when it comes to bending the human body. The double submission put Baszler, who feels destined to face Raw women’s champion Asuka after she and Nia Jax are done, over in a big way. It also gave Banks a way to now blame Bayley for her losing both her titles.

— Keith Lee getting a clean win over Randy Orton on pay-per-view was a huge and needed moment for the former NXT champion. Orton may get his win back before a return match with McIntyre, but Lee was made in a big way Sunday night.

— We saw our first cracks in the Seth Rollins-Murphy partnership. Murphy’s unintentional kick cost them their tag match against Dominik and Rey Mysterio. Still, the Mysterios as a father-son tag team might be more intriguing than a Rollins-Murphy feud if it goes that route.