Biomass power plants are facing calls for their £13 billion taxpayer-funded subsidy to be reviewed, as they release more carbon dioxide per unit of electricity than coal.

Supporters claim wood pellets incinerated by the UK’s three main plants to generate electricity are carbon-neutral because the trees are re-planted.

But a report has challenged this assumption arguing that, even if some emissions are reabsorbed, it can take centuries for all the carbon released to be removed from the atmosphere.

They also said biomass power is more expensive than offshore wind and solar, which are profitable without subsidy, forcing up energy bills and taxes ‘without a clear benefit to climate’. 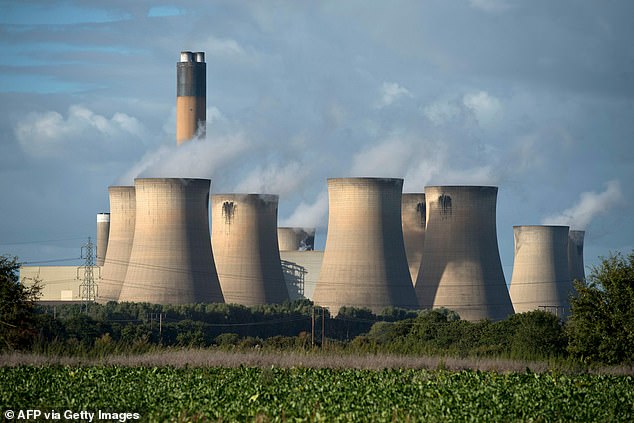 The UK has three major biomass power stations. The largest is Drax in North Yorkshire, which is a re-designed coal power station 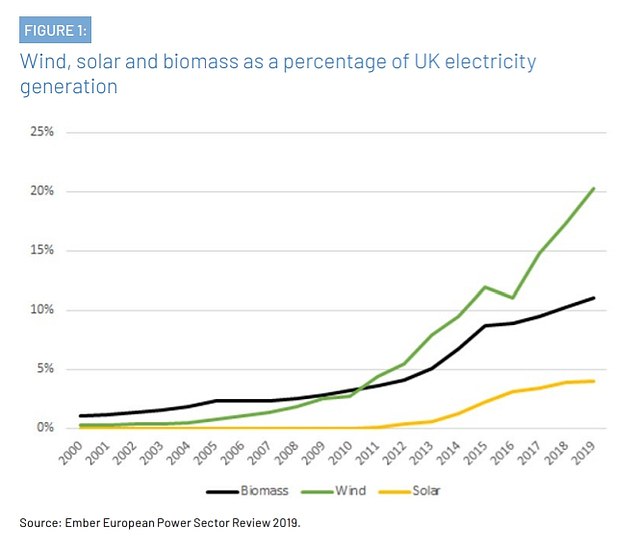 Biomass accounted for 11 per cent of the UK’s electricity production last year, while coal accounted for 2.1 per cent. Wind was the major contributor

Their report cites a study that found the periods during which atmospheric CO2 levels are raised before forest regrowth can reabsorb the excess emissions ‘are incompatible with the urgency of reducing emissions to comply with objectives enshrined in the Paris Agreement’.

They added that in some scenarios, such as when different tree species are planted, ‘the carbon present in the original forest stock may never be recovered’.

Ember also found biomass power in the UK, which is reliant on burning wood that is often imported from the US, will receive an estimated £1 billion subsidy this year alone – with the deal set to continue until 2027.

It will also get tax breaks, as it is considered to be green power, which could cost the government up to £754 million next year alone.

Any brought in when contracts end may include support for biomass power plants to develop carbon capture and storage systems, reducing their emissions. 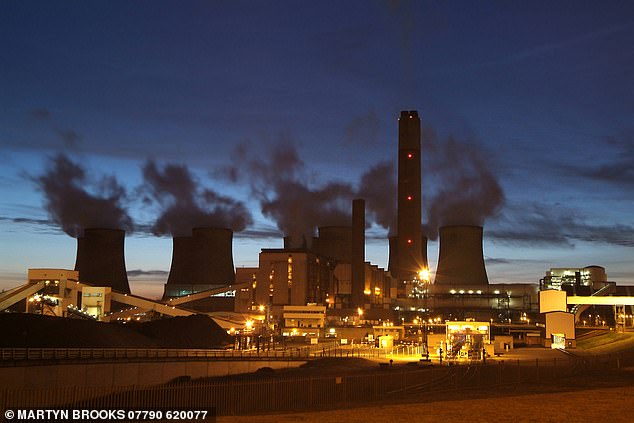 There are four coal power plants in the UK, including Ratcliffe station in Nottinghamshire, which are set to close by 2025

When does biomass release emissions?

Plants first generate emissions by transporting fuel to their site, which can be high if it is moved over long distances.

Further emissions are then generated when it is burnt.

Supporters argue that all this can be offset through planting new forests, which reabsorb the carbon and are then later burnt themselves in order to produce more power.

But critics have argued this process can take decades or even centuries to complete, meaning biomass may be ineffective in reducing carbon emissions.

Based on its findings, Ember argues the UK should ‘transition away from the use of biomass for power generation without carbon capture and storage’.

‘When biomass contracts were initially agreed, biomass looked like a much better deal than it does now,’ it said.

‘The economics have shifted decisively. The 2019 auction results procured offshore wind at megawatt of power for £44, while (biomass) currently provides a megawatt for £116.50.’

Britain’s largest biomass power plant Drax is based in North Yorkshire, and was built from a converted coal power station. The second-largest, Lynemouth, is in Northumberland.

The UK has four coal power plants, which are scheduled to close by the year 2025.

Coal is required to pay for the carbon it emits, unlike biomass plants, under the EU Emissions Trading System and the UK’s Carbon Price Support.

A Drax spokesman told The Times: ‘The emissions from biomass power generation should not be taxed because under UN global carbon accounting rules, woody biomass emissions are already accounted for in the agriculture, forestry and other land use sector. Any change would mean that emissions were being counted twice.’

Statins slash the risk of early death by 25 per cent, research claims

Most IVF patients overestimate their chances of success, study says