California prosecutors are seeking to retry a cop killer who got his conviction vacated in June after spending over 30 years on death row and suffering permanent brain damage from a stroke.

Dennis Mayfield, now 61, had admitted to killing Sgt. Gary Wolfley of the Rialto Police in 1986 but claimed he feared for his life and that Wolfley had falsely imprisoned him.

Now San Bernardino County prosecutors want Mayfield to stand trial again, even though he suffered a debilitating stroke while on death row in San Quentin State Prison in 2011 that left him with permanent brain damage. 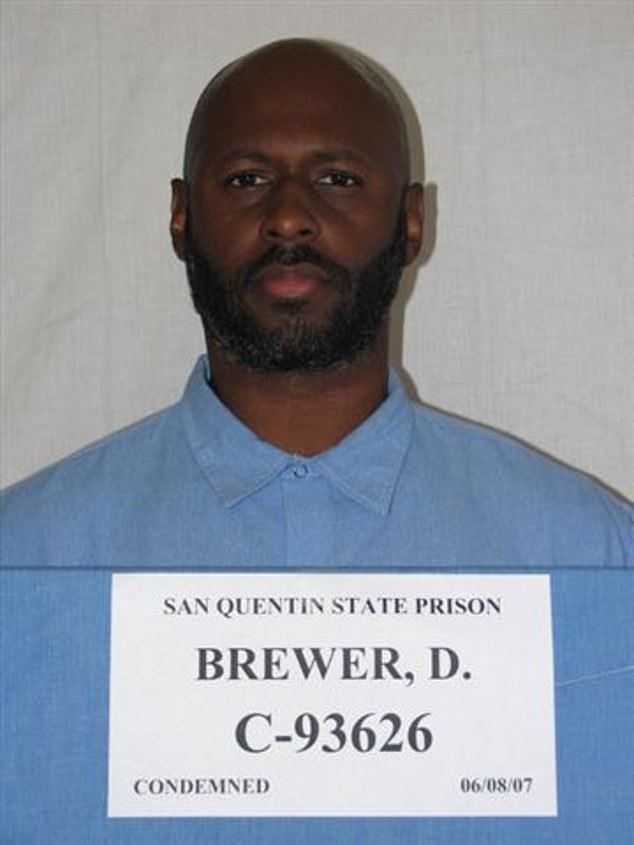 Dennis Mayfield, also known as Dennis Brewer, spent over 30 years on death row for killing a Rialto police sergeant in 1986. In June a federal judge vacated his conviction, finding that the process that selected his trial jury was racially biased 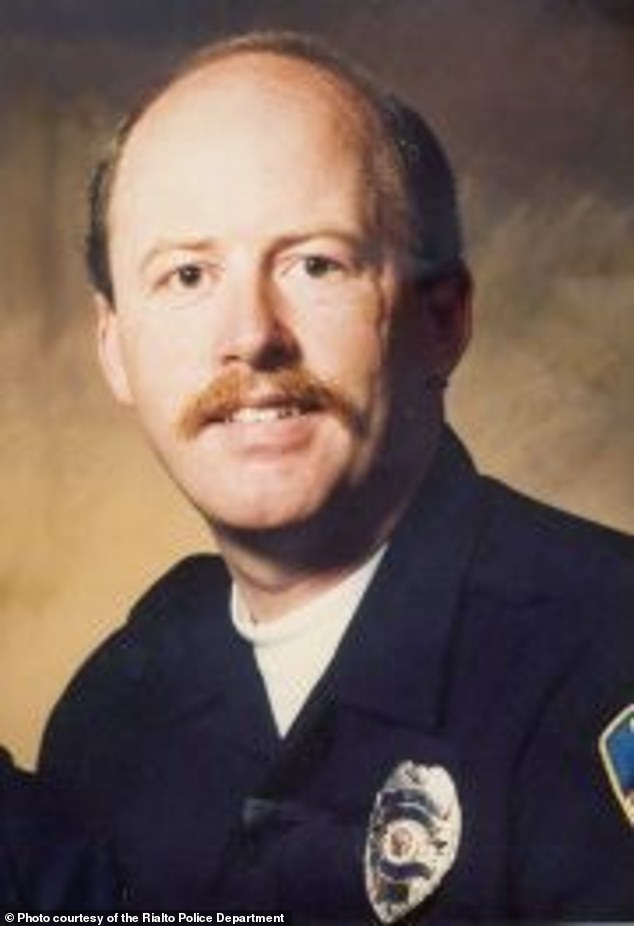 Sgt. Gary Wolfley responded to a call on May 3, 1986, and chased Mayfield, who shot the cop twice in the face with his own service revolver. Forensic analysis found no evidence of gunpowder residue on Wolfley’s body, which would be expected in a close-range shooting of the kind Mayfield’s defense team described at trial

Mayfield’s defense attorney, a court-appointed psychologist, and a clinician at his current jail all say he is too incapacitated to stand trial again.

‘Any characterization at this point [Mayfield] is totally disabled is simply not accurate,’ District Attorney Jason Anderson told the Sun.

In the early hours of March 3, 1986, Wolfley, then patrolling in a car with his wife, who had recently become a police officer, responded to a call about suspicious people at a gas station, according to reporting from the Los Angeles Times the next day.

He pursued a man who fled behind the station. His wife, hearing a gunshot, put out a radio call for help.

Wolfley, 31, had been shot twice in the face, fatally.

The suspect, Mayfield, then shot through the window of a second responding police car, injuring the officer inside.

Mayfield ran and barged through the door of a house a quarter-mile away, where he shot a resident in the leg and took him hostage. Mayfield surrendered about five hours later.

At his trial, Mayfield’s attorneys argued that during the encounter behind the gas station, Wolfley had shouted racial slurs and verbal threats while pointing his gun at his head, according to a court document.

Mayfield, they said, feared for his life and grabbed the officer’s hands, and the gun fired twice – accidentally.

But a lack of gunpowder residue on Wolfley’s body suggested that the shooting could not have happened from that close-up, according to another court document. 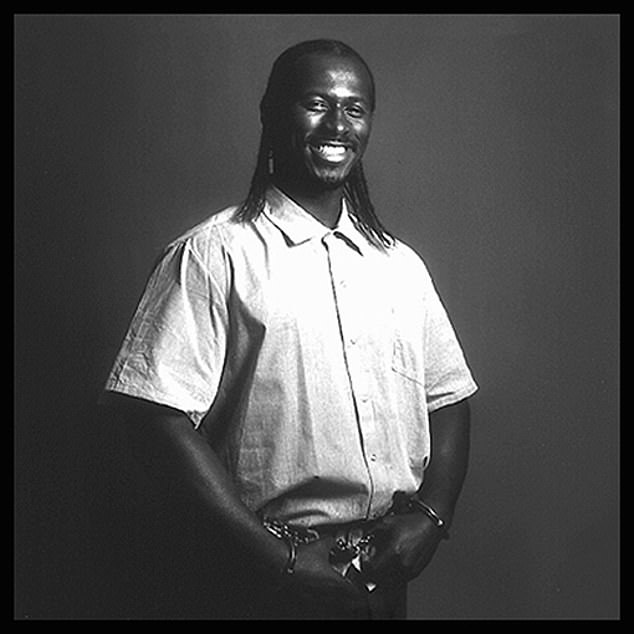 In 2011 while on death row in San Quentin Prison, Mayfield, now 61, suffered a stroke that caused permanent brain damage. After a judge vacated his sentence in June, prosecutors are trying to get Mayfield reevaluated by a neuropsychologist to determine if he’s competent to stand trial a second time

Two years after killing Wolfley with his own .357 Magnum service revolver, Mayfield was sentenced to death after being convicted of first-degree murder.

Dennis Mayfield, also known as Dennis Brewer, spent over 30 years in prison facing his execution and petitioning the federal Central District of California to vacate his conviction.

In June, Judge Olguin did just that, deciding that prosecutors conducted a racially biased process to select his jury. 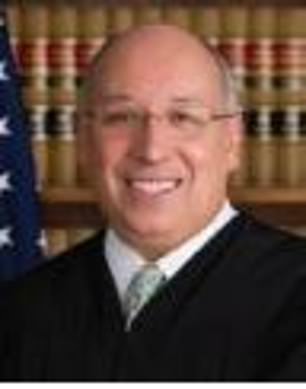 U.S. District Judge Fernando M. Olguin found in June that in the lead-up to Mayfield’s 1988 trial, prosecutors grilled black potential jurors on racial matters in a way that they did not apply to white potential jurors

They grilled black potential jurors on racial matters, operating under ‘an assumption or belief that a Black juror would favor a Black defendant,’ he wrote.

By the time his conviction was vacated this year, Mayfield was significantly disabled. His 2011 stroke limits his physical and mental faculties. He has been in a wheelchair since then.

Marjorie Graham-Howard, the court-appointed psychologist, wrote in a September 23 report that Mayfield did not understand the charges against him and did not know why he was in prison.

In August, a jail clinician at West Valley Detention Center in Rancho Cucamonga evaluated Mayfield and found he was ‘unable to identify location, time or situation,’ the Sun reported.

‘This is as clear-cut a case of incompetency as you can get,’ San Bernardino Deputy Public Defender Daniel Messner, one of Mayfield’s lawyers, told the Sun.

Prosecutors disagree, pointing to sections of Graham-Howard’s report that suggest Mayfield can mostly care for himself and can communicate, albeit slowly.

Graham-Howard suggested that a neuropsychologist examine Mayfield before any determination of permanent incompetence is made.

Prosecutors and defense attorneys are set to argue Thursday how and where Mayfield should be evaluated for competency once again.

Meanwhile, police in Rialto, the city where Gary Wolfley served from age 19 until his line-of-duty killing at 30, want Mayfield behind bars for good.

‘It is our position that Dennis Mayfield should continue to stay in prison, and should not be afforded any leniency or change in sentencing. Sgt. Wolfley was not afforded any courtesies by Mayfield when he killed Sgt. Wolfley,’ Rialto Police Chief Mark Kling wrote the Sun in a statement.

‘Therefore, Mayfield should remain in prison for the rest of his life as the trial judge and California Supreme Court ordered.’

Swedish police have dropped charges against a mother suspected of holding her son captive for 28 years after he admitted being able to...
Read more
U.S

A large meteor was seen in parts of the northeastern United States and southern Ontario as dramatic images captured on social media show...
Read more
U.S

Widow pays tribute to doctor husband, 51, who died from COVID-19

'He sacrificed himself in order to save others': Widow pays emotional...
Read more

Swedish police have dropped charges against a mother suspected of holding her son captive for 28 years after he admitted being able to...
Read more

'There’s nobody better to play for England than Jordan Pickford': Everton...
Read more

Ben went on to say the support his co-star had received from the public had been “incredible”.Praising Kate, he went on to say:...
Read more
Load more