Woman who thought she was engaged is left shocked after her ‘groom’ denies ever proposing despite her seven months of wedding planning – and he claims they’re not even DATING!

A bride-to-be has been left shocked to find her boyfriend did not remember proposing, after she spent seven months planning their wedding.

The distraught woman believed her ‘groom-to-be’ had popped the question nine months ago, leading her to extensively plan their nuptials.

However, when she told her beau she was going wedding dress shopping, he was quick to say he had never asked her to marry him.

The unusual story left many wondering whether the ‘bride’ had misunderstood her boyfriend, or whether he had changed his mind and was lying. 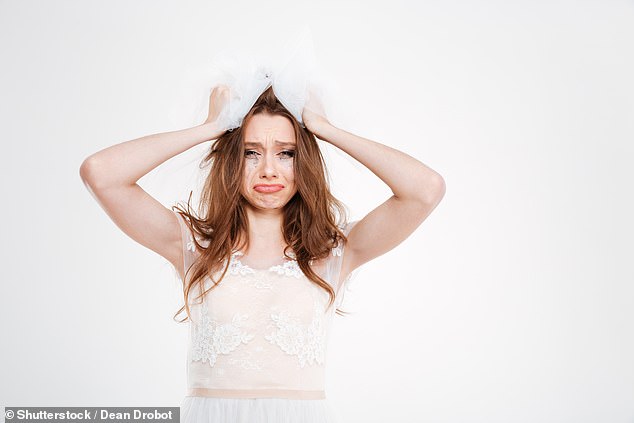 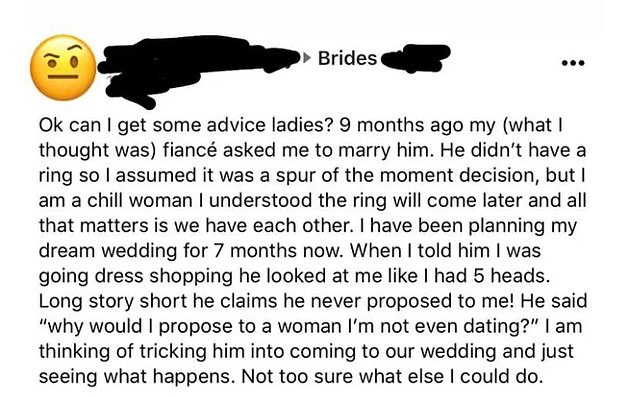 The bride initially shared her story in a Facebook post, which later resurfaced on Reddit. She explained her ‘groom-to-be’ said ‘why would I propose to a woman I’m not even dating?’

‘Nine months ago my (who I thought was) fiancé asked me to marry him,’ the disgruntled woman wrote on Facebook.

‘He didn’t have a ring so I assumed it was a spur of the moment decision, but I am a chill woman … I understood the ring will come later and all that matters is we have each other.

‘I have been planning my dream wedding for seven months now.

‘When I told him I was going dress shopping, he looked at my like I have five heads.

People were baffled by the unusual story, as some could not work out who from the bride or the groom was lying

‘Long story short, he claims he never proposed to me!

‘He said “Why would I propose to a woman I’m not even dating?”.’

Instead of breaking up, the woman said she planned on resuming her wedding planning and inviting him to the celebrations.

‘I’m thinking of tricking him into coming to our wedding and just seeing what happens,’ she said.

The outlandish story left many on Reddit scratching their heads as they tried to work out whether the bride was unhinged or the groom had been lying.

‘Not sure which is worse, her deciding on whether to trick him into attending a wedding he doesn’t want after he said they aren’t even dating, or him possibly being the ultimate gaslighter,’ one said.

‘I mean, I didn’t know I was dating my husband for the first two weeks, but that is waaaay different than being engaged for months,’ said another.

‘She prob said something clever/cute and the guy said “will you marry me” tongue in cheek,’ they added.

‘Why yes! Plan the whole thing, spend thousands, invite everyone and just tell him it’s a football party. It will end well, promise,’ one sarcastically wrote.

Some came to the defense of the bride. saying other men would be capable of such defection.

‘We’re all assuming she’s crazy or trying to trap him, but I have 1,000 percent met/dated guys who would actually do this,’ one wrote.

But overall, no one was sure what to make of the bizarre story.

‘I genuinely can’t tell which one of them is the lunatic,’ one said.

Google is being strongly criticized for the departure of its well-respected co-founder of the ethical Artificial Intelligence (AI) division, amid a row over...
Read more

Mother is charged with murdering her newborn twins, whose bodies were...
Read more

The family of Roald Dahl, who penned the children’s classics “Matilda” and “James and the Giant Peach,” has quietly apologized for the late...
Read more