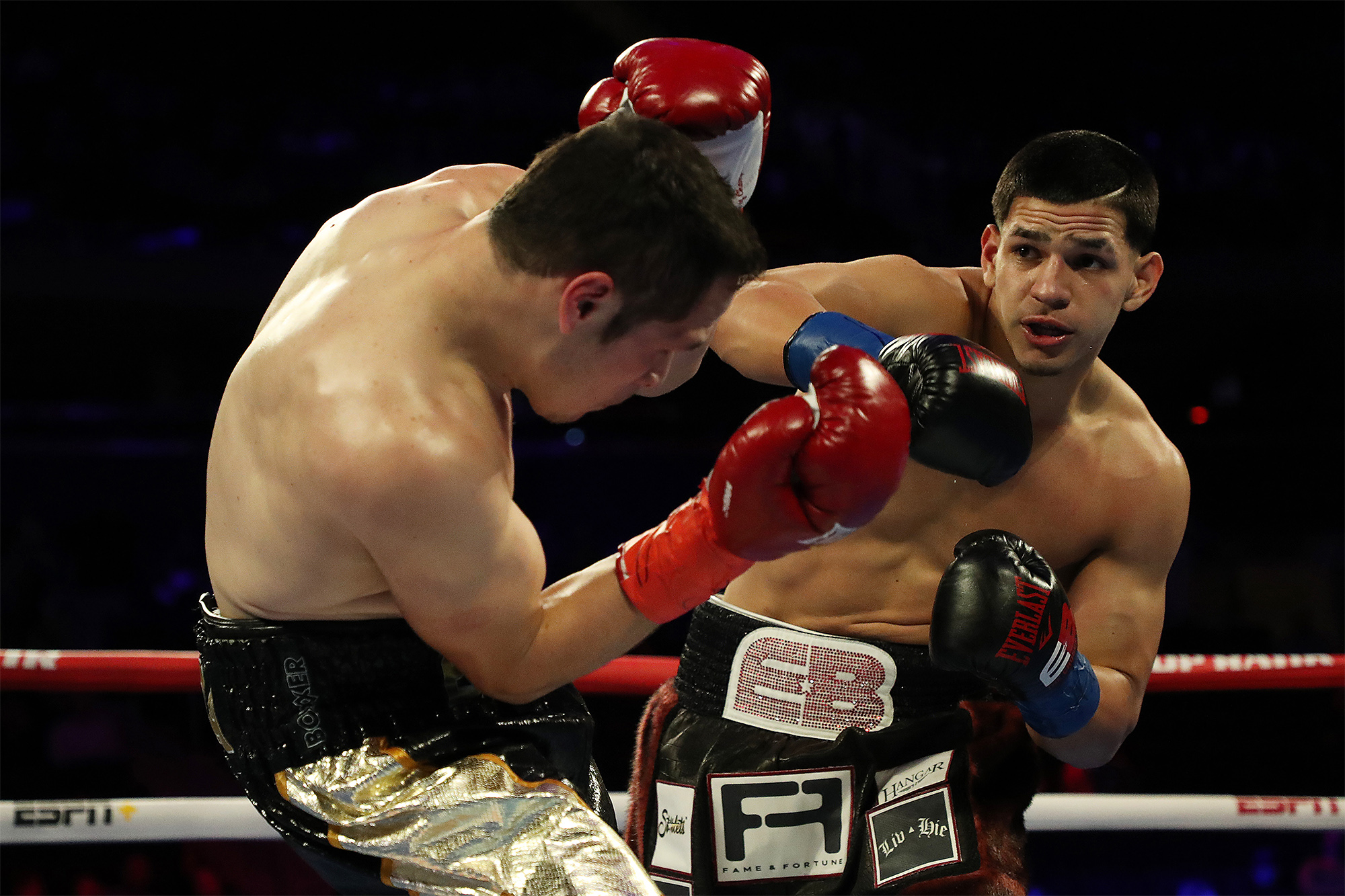 The next time Edgar Berlanga hears the second-round bell, it’ll be his first time.

The Brooklyn-born super middleweight has slugged his way to a perfect 14-0 start to his professional career. All of his opponents have something in common — they’ve all been knocked out in the first round.

Berlanga’s trainer, Andre Rozier, admitted that his first 13 fights didn’t exactly come against top-quality fighters. But bout No. 14 was supposed to be different. Eric Moon squared off with Berlanga at MGM Grand Convention Center on July 21 in what was supposed to be a “step-up” fight. Berlanga and his team expected it to at least last until the later rounds.

“His last opponent wasn’t supposed to be what we call ‘easy work.’ But he was easier work than some of the easy work,” Rozier told The Post. “I was very happy about that. … That’s what we do. We get in, take care of business and get out.”

Fans have already witnessed the 23-year-old’s power, but that’s just scratching the surface. Berlanga can’t wait to show everyone the full package.

“I have a beautiful boxing ability,” Berlanga told The Post. “I’ve got beautiful leg movement, head movement. I’m a boxer-puncher. My boxing skills are top of the top. Only the team sees me in the gym, and they see the boxing skills, they see everything. But the world hasn’t seen anything yet. This is just the beginning; they’ve only seen the first round. I can’t wait to show my skill, and when I go those extra rounds, show the world that I’m capable of doing everything.”

Despite the early dominance, Berlanga’s overpowering style could raise a few questions. Can he go the distance? Does he have a Plan B if he can’t knock his opponent out? What happens when he starts taking some sustained hits?

Those questions don’t concern Berlanga and his team.

“First and foremost, a lot of people will tell you ‘he has to get rounds,’ ” Rozier said. “I tell him all the time, when we train, we train for rounds. Just because he doesn’t get them doesn’t mean he’s not ready for them. He’s ready to do 10 rounds, he’s ready to do 12 rounds. It just so happens he’s making sure he doesn’t have to. But, if the time does come, and eventually it will, he will be able to go those rounds, and then some, and perform at maximum level. Quite frankly, his job will be always to make sure he hits his opponents out of there, and does it in solid fashion.”

Born in Brooklyn, Berlanga is of Puerto Rican descent and grew up admiring Puerto Rican stars Miguel Cotto and Felix “Tito” Trinidad. Representing his culture is paramount to Berlanga, who wants to be next in line.

Both Berlanga and Rozier envision him soon making the jump to light-heavyweight. Wherever he fights, however, Berlanga is determined to provide a show.

“This is boxing at the end of the day and this is entertainment,” Berlanga said. “We’re entertainers. We go in there and fight and entertain people. They pay to watch you. The more butts you can fill up in those seats, the more money you’re going to make, the [bigger] superstar you’re going to become. My style is perfect because I’m a boxer-puncher. I don’t like to get hit. As you can see, I like to do the damage. But, it’s boxing. For years people loved to see a fight, people loved to see people go to war and entertain. They don’t want to see a fighter running around the ring.”

Already with 14, Berlanga is chasing the late Ali Raymi’s record of 21 consecutive first-round KOs to start a professional career.

That’s not on his mind though. Berlanga is obsessed with becoming one of the greats.

“I see it happening in two years or less,” Berlanga said. “I’m a special fighter, man. I have the charisma. I’m special. I’m just a different breed.

“Right now, I set the tone. … [Against Moon] I really did. I’m 14-0 with 14 KO’s all in the first round. Nobody in the world is doing that right now. I feel like I’m going to be the most entertaining fighter out there.”