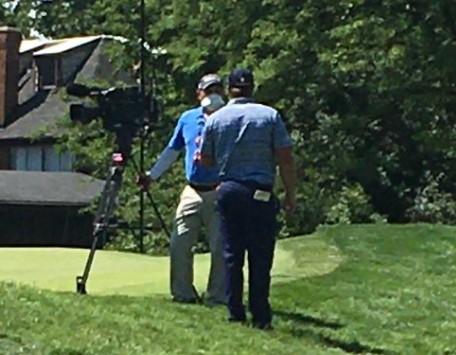 Bryson DeChambeau has been one of the hottest stories in golf since its return, but he wasn’t too happy with a cameraman on Saturday during the third round of the Rocket Mortgage Classic in Detroit.

A bulked-up DeChambeau, who has been racking up Top 10s without a win recently, struggled at the beginning of his round and his temper got the better of him after he hit a lackluster sand shot from a greenside bunker on No. 7.

The much-talked-about golfer fired his club angrily into the sand en route to a bogey on the hole. Though DeChambeau called his reaction to the shot as “dumb,” he was upset the cameraman subsequently followed him closely after the outburst as he approached the green and marked his ball.

“He was literally watching me the whole entire way up after getting out of the bunker, walking up next to the green. And I just was like, ‘Sir, what is the need to watch me that long?’” DeChambeau told Golf Channel. “I mean, I understand it’s his job to video me, but at the same point, I think we need to start protecting our players out here compared to showing a potential vulnerability and hurting someone’s image. I just don’t think that’s necessarily the right thing to do.”

Bryson running a little hot. Caught up with him on 7 where he took a Sergio slash at the sand after splashing out of a greenside bunker, muttered an expletive after missing the par save and spent 60 seconds in a…testy discussion with a cameraman on his way to 8 tee. pic.twitter.com/ENjQt1U689

Despite the antics, DeChambeau shot a 5-under 67 in the third round and is at 16-under. He’s tied for second place with Ryan Armour and is three shots behind Matthew Wolff, who shot a third-round 64.

After completing the hole, DeChambeau was shown talking to the cameraman after the outburst. DeChambeau, who is the 10th-ranked player in the world, said the PGA Tour has to do a better job protecting its players.

“As much as we’re out here performing, I think it’s necessary that we have our times of privacy as well when things aren’t going our way,” DeChambeau said. “I mean, we’re in the spotlight, but if somebody else is in the spotlight they wouldn’t want that either.

“I feel like when you’re videoing someone and you catch Tiger [Woods] at a bad time, you show him accidentally doing something, or someone else, they’re just frustrated because they really care about the game. It could really hurt them if they catch you at a potentially vulnerable time.

“We don’t mean anything by it, we just care a lot about the game. For that to damage our brand like that, that’s not cool in the way we act because if you actually meet me in person, I’m not too bad of a dude, I don’t think.”

Apple Music and Apple TV+ reportedly to be bundled at a...

American Airlines prepares to drop some service to smaller cities as...

Apple Music and Apple TV+ reportedly to be bundled at a...

American Airlines prepares to drop some service to smaller cities as...