By Stephen Mcgowan for MailOnline

Neil Lennon blamed Celtic’s fragile defence for the damaging loss of another two points in a six-goal thriller in Aberdeen.

Under pressure to recover from back to back defeats to Rangers and AC Milan two goals in two minutes from Leigh Griffiths and Ryan Christie put the Parkhead side on course for a Pittodrie great escape.

Heading for victory as the board went up for three minutes of added time, however, Dons midfielder Lewis Ferguson converted the third penalty of the match awarded by referee Willie Collum to earn a deserved point for the home side. 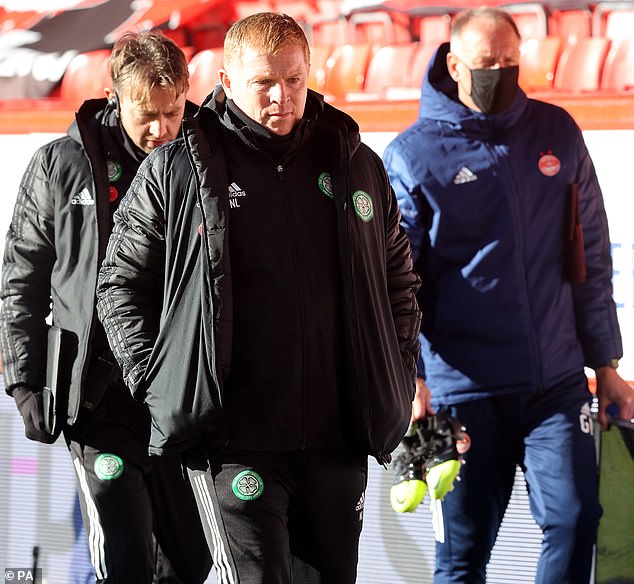 “I’m disappointed not to come away with all three points. When you are a manager and you score three goals away from home you think you are going to win the game.

‘There is a little bit of fragility with a few of them. They aren’t playing with a major amount of confidence.’ 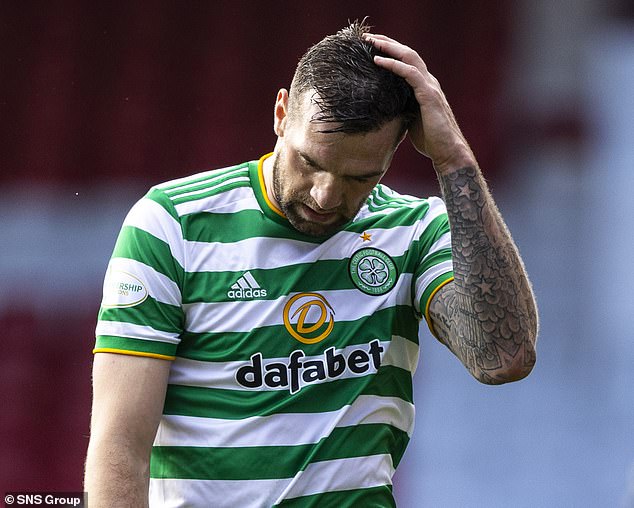 Olivier Ntcham conceded a needless penalty scored by the impressive Ferguson before half-time against the run of play.

Tom Rogic justified his selection ahead of Scott Brown with an assist for Callum McGregor’s equaliser before Ryan Hedges handed Aberdeen a shock lead for the second time.

Finally getting their noses ahead through quickfire goals for substitite Griffiths and a Christie penalty Celtic hopes of a dramatic comeback were snuffed out at the death.

‘I thought we were a little bit passive in the first-half in the final third because we had control of the game. The goal we gave away was very sloppy.

Then the response in the second-half was tremendous. But we need to tidy up defensively. That is eight goals in three games. It is not good enough.”

With Rangers securing a comfortable win over Livingston, Celtic need to win their game in hand to stay three points adrift of their bitter rivals 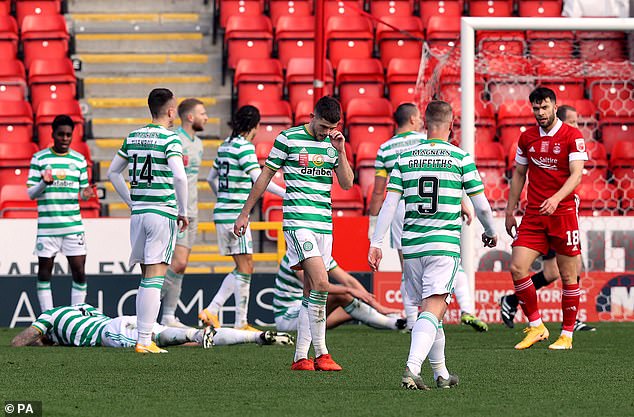 A trip to Lille in the Europa League is followed by a rematch with Aberdeen in the Scottish Cup semi-final at Hampden next weekend before a return to league duty.

‘There is still a long way to go,’ adds Lennon.

‘I think the players have had a tough week. They could have played better. We will improve, there is no question of that.

‘I am confident of that. And we will get players back from Covid and from injury. There is a long, long way to go. But we have to tidy up defensively.’

Missing £5million Greek keeper Vasilis Barkas to a back injury Lennon handed Scott Bain a rare start and absolved the keeper of blame for the goals lost, the second of which stemmed from another Shane Duffy lapse.

Admitting he could see why Willie Collum gave all three penalties the Parkhead boss was less happy with the referee’s all-round performance.

Loujain al-Hathloul, the jailed activist who led the charge to allow women to drive in Saudi Arabia, has gone from jailed rights activist...
Read more

He commented: "We had a day of sorting ourselves out and we all met on the beach, and Hammond suggested snorkelling."The father-of-two took...
Read more
Load more