Children who live in cities plagued by air pollution and ‘unwalkable’ infrastructure are more likely to suffer from obesity, study shows

Children who live in cities plagued by air pollution, a high population density, ‘unwalkable’ infrastructure and have parents who smoke are more likely to be obese, a study has revealed.

High levels of nitrogen dioxide inside and outside the home alongside particulate matter between PM2.5 and PM10, which is produced by cars and burning fossil fuels, were linked to growing waistlines.

Those going to school in densely populated areas with few services and facilities, were also more at risk, regardless of their socio-economic status.

Childhood obesity has spiralled at an alarming rate worldwide, and now affects almost a third of children in Europe. 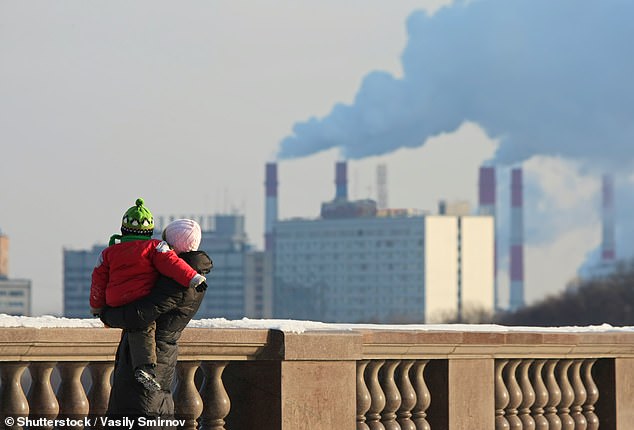 Children exposed to pollutants such as nitrogen dioxide and particulate matter between PM2.5 and PM10 were more likely to be obese, a study has shown. (Stock image)

To get the results, scientists followed more than 1,300 children living in six countries, including 200 children in Bradford, UK, from birth to the ages of six to 11.

They measured 77 pregnancy and 96 environmental exposure factors, which also included green spaces and chemical pollutants such as pesticides, phenols and phthalates.

These were then analysed using the exposome concept – which considers factors relating to diet, lifestyle and environment altogether to establish what was having the greatest impact on children’s health.

Urine and blood samples were used to detect the children’s exposure to pollutants and other compounds.

Of the countries studied, Spain and Greece had the highest rates of obesity at 43 per cent and 37 per cent. 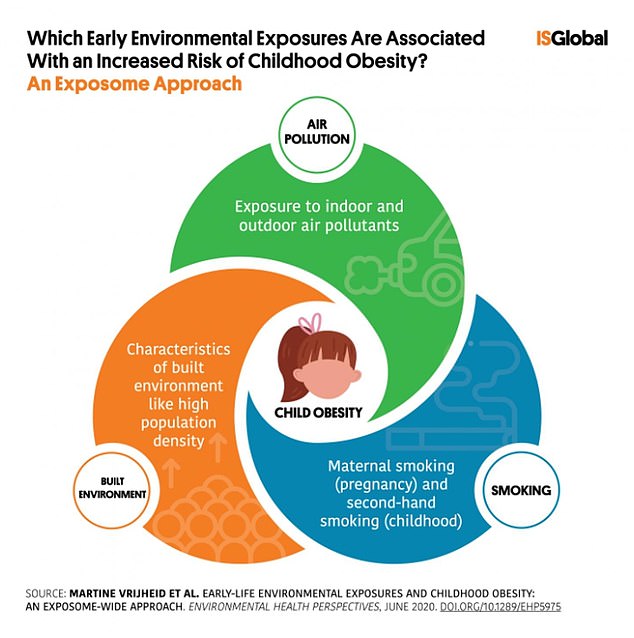 The study found that the built environment, smoking and air pollution were all linked to obesity

Bradford had 15 locations breaching air pollution limits in 2018, a report published by Friends of the Earth shows, with levels of nitrogen dioxide above permitted levels.

Air quality across central London in areas including Covent Garden, Lambeth, Southwark and Farringdon breaches limits annually, according to maps produced by the Greater London Authority.

‘The prevalence of childhood obesity is increasing at alarming rates across the globe and may have increased even more than usual during the Covid-19 lockdown period,’ said first author and ISGlobal researcher Martine Vrijheid.

Leda Chatzi, professor of Preventive medicine at the University of Southern California and lead study author, said: ‘These findings provide further evidence that modifying environmental exposures early in life can limit the risk of obesity and associated complications.

‘The implications for public health are important since these results may help to identify obesity-related exposures that could be targeted for prevention and intervention early in life.’

She added the relationship between obesity and the built environment ‘is in line with the findings of previous research and could be explained by a lack of opportunities for children to walk or engage in other outdoor physical activities.’ 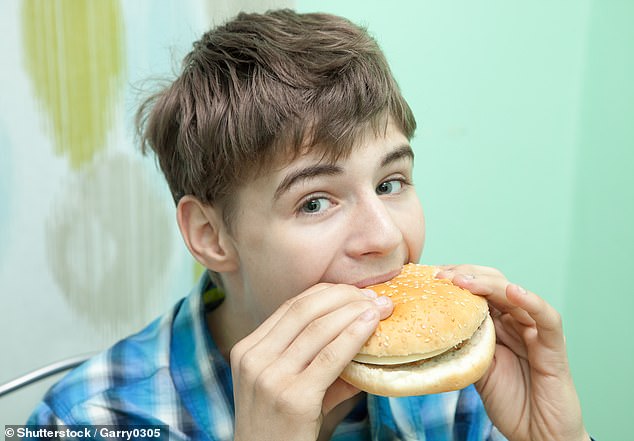 Of the countries included in the study, Spain and Greece had the highest obesity rates at 43 per cent and 37 per cent. (Stock image of child eating a burger)

The study was funded by the Barcelona Institute for Global Health which is supported by the ‘La Caixa’ foundation.

Other countries included in the study were France, Lithuania and Norway.

It forms part of the HELIX project and was published in the journal Environmental Health Perspectives.