Children whose parents have degrees feel more stressed when they start university because they are worried about failing or ‘letting down their family’, study finds

University students whose parents also have a degree suffer from more stress when they start their course than others due to a fear of ‘letting down their family’.

A new study by the University of Bochum, Germany, looked at levels of the stress hormone cortisol in the hair of women starting their first year at university.

About 80 per cent of people in higher education report feeling anxious or stressed, and the number dropping out due to mental health issues is also increasing. 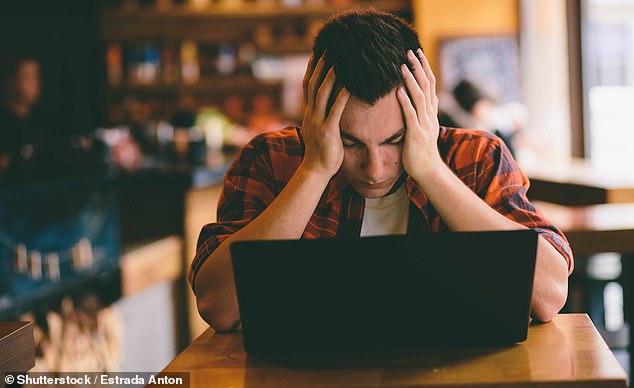 University students whose parents also have a degree suffer from more stress when they start their course than others due to fear of ‘letting down their family’. Stock image

Dr Nina Minkley, study lead author, said starting a degree course is an exciting time phase for everyone involved – but some find it harder than others.

A stressed person’s body releases a hormone called cortisol, which is stored in ‘growing hair’, where it can build up over time if stress levels remain high.

The research team recruited over 70 students from different family backgrounds and asked them for three strands of hair, cut off near the scalp.

As human hair grows at about 0.4 inches every month, the researchers focused only on the last 0.6 inches, which had grown in the past six weeks, when the term began.

Students were then asked to fill out a questionnaire about their parents’ level of education and how stressed they were feeling.

‘The only inclusion criteria were that they started their first semester and that they had sufficiently long hair,’ said Dr Minkley.

‘In the end, this meant that we recruited almost only women, and we decided not to include the few eligible men to avoid falsifying the results.’

The researchers found first-year students from ‘academic backgrounds’, where at least one parent had a university degree, had higher stress levels.

The team believes this is because failing their studies would lead to a loss of status for them and their families.

These findings are in line with other studies which have shown students with academic parents often attend university even if they haven’t done well in school. 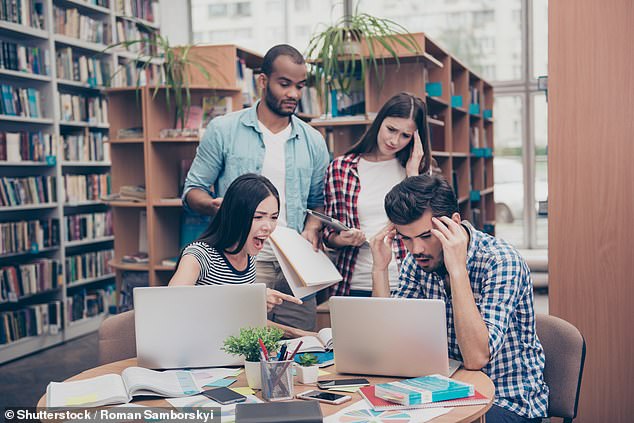 About 80 per cent of people in higher education report feeling anxious or stressed, and the number dropping out due to mental health issues is also increasing. Stock image

‘Children of non-academics, on the other hand, can only win and are therefore probably less stressed,’ said Dr Minkley.

Over 500,000 people are accepted to university in the UK every year and nearly half of them are 18-years-old.

The findings could help universities alleviate stress among first-year students and parents who wish to reassure their children.

The findings were published in the journal Frontiers of Psychiatry.

ANXIETY: A NORMAL PART OF LIFE THAT AFFECTS DIFFERENT PEOPLE AT DIFFERENT TIMES IN THEIR LIFE

Anxiety is a normal part of life that affects different people in different ways at different times.

Whereas stress can come and go, anxiety often persists and does not always have an obvious cause.

Along with depression, anxiety is among the most common mental-health condition in the UK, affecting 8.2million people in 2013 alone.

Around 40million adults suffer from the condition in the US every year.

Anxiety can make a person imagine things in their life are worse than they are or that they are going mad.

Although it evolved as part of the ‘fight or flight’ mechanism in our caveman days to avoid danger, anxiety can be inappropriately activated in everyday life when stress builds up.

It can have a clear cause, such as moving house or having surgery. However, sometimes little life events build up until a person is unable to cope, with anxiety then taking them by surprise.

Physical symptoms can include:

Some psychological symptoms are:

Activates like yoga, exercise, reading and socialising can help to manage anxiety.