Children who have a harmonious relationship with their parents are better at maths than those with a dysfunctional family life, a new study claims.

UK psychologists found that parent-child cooperation – assessed through a drawing session on the retro ‘Etch-A-Sketch’ toy – was associated with maths exam results at age 11.

Highly educated parents who had good levels of involvement with the school also were found to have children with good maths skills at that age. 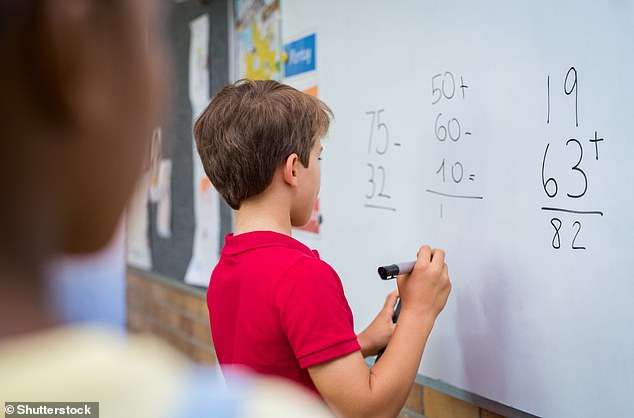 The University of Sussex study found parental education qualifications, a harmonious parent-child relationship, and parental involvement with the school when the child was at the age of  age 11 were good predictors of attaining maths skills (stock)

The advantage of having the best-rated ‘harmonious’ relationship compared to the worst-rated was equal to a difference of 0.152 national curriculum levels at age 11.

‘It is apparent that by showing encouragement, listening to each other’s ideas and sharing your own, being constructive and not negative or argumentative, and being engaged with the task is associated with positive outcomes,’ said Dr Danielle Evans, co-author of the study, told MailOnline.

Other factors also influenced the mathematical ability of children, including greater parental education, greater school involvement and ‘feminine gendered play at age 3.5 years’ were also found to be associated with higher maths attainment at age 11.

Parental education still had the strongest association with maths attainment in this study – even greater than parent-child harmony.

There are unique ways that parental education contributes to attainment of maths skills – one of which could be genetic, the scientists add.

For example, parents that are more highly educated may pass on traits that are important for educational attainment, such as motivation and good temperament, or could also be more likely to provide an environment that is intellectually stimulating.

Researchers say their findings could help address the ‘maths crisis’ in the UK that has lasting effects into adulthood.

Around half of adults of working age in the UK have maths skills no better than a six-year-old and only 22 per cent have the skills of an average 16-year-old, they said.

‘Adults’ low maths skills are associated with high unemployment rates and lower socioeconomic status, which, as found in this study, is linked to their child’s maths attainment also,’ the researchers write in their study, published in the journal Royal Society Open Science.

‘Therefore, further work is needed to eradicate the ‘maths crisis’ in the UK, thus improving several long-term outcomes for individuals and wider society.’

The paper describes an analysis of data from the Avon Longitudinal Study of Parents and Children (ALSPAC) – a large birth cohort consisting on children born to women in the southwest of England with a due date between April 1, 1991 and December 21, 1992.

The children and their parents have been followed extensively from pregnancy through to the present day for research purposes.

Maths attainment was taken as the children’s performance in formal education assessed at the four ‘key stages’ up until the age of 16. 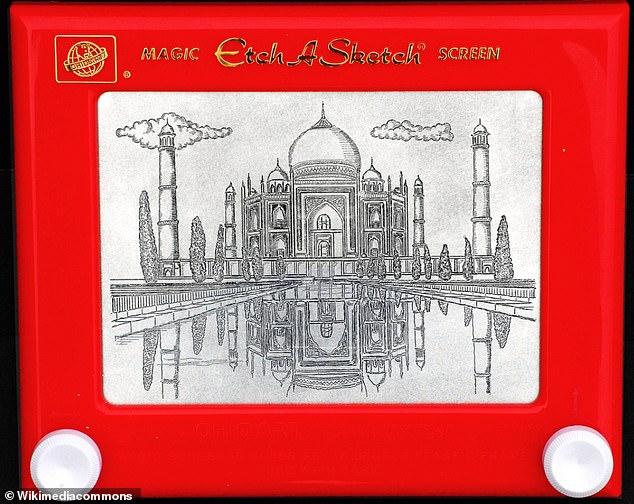 In the study, parent-child harmony was measured using a play-task where children and one of their parents would play with a computerised Etch-a-Sketch toy together

This was then compared against potential potential predictors of ‘maths attainment’ throughout childhood and adolescence relating to the home-environment and parenting.

These predictors were: parent-child relationships, parental mental health, parents’ involvement with the school and activities, home-teaching, parental education, and ‘gendered play’ – the types of toys parents provided and the play they participated in at home.

Firstly, parent-child harmony was measured using a play-task where children and one of their parents would play with a computerised Etch-a-Sketch toy together.

WHAT WAS THE FIVE-POINT SCALE?

‘Harmony’ between them was assessed by observing the interaction and rating the level of conflict on the following five-point scale:

– ‘Many conflicts‘ – much discord and conflict. No reciprocity observed, no positive feeling expressed.

– ‘Neutral‘ – atmosphere seems neither positive nor negative. Interaction is rather flat.

The mechanical drawing toy, popular since its release in the 1960s, features two knobs on the bottom corners for drawing.

The two family members had to work together to successfully draw the house – especially when drawing the diagonal roof and circle windows for example.

‘Harmony’ between the parent and child was assessed by observing the interaction and rating the level of conflict on a five-point scale, ranging from ‘many conflicts’ to ‘very agreeable’.

‘It is essentially a measure of how well children and their parent cooperated together, how engaged they were with the task and helping each other, how positive their interactions were, and whether any conflicts were present,’ Dr Evans said.

They found that the most harmonious relationships during the task significantly correlated with maths skills.

Meanwhile, parental mental health in early childhood was not found to have a long-term impact.

Despite this, ‘additional research would be beneficial in assessing any association between the trajectory of parental mental health and child maths attainment,’ the study authors say.

However, the impact was extremely small and there was very little effect of gender-stereotyped play on maths attainment, suggesting that sex differences in maths attainment stem from other factors requiring further study.

Despite the observations occurring in a lab-type setting rather than in more natural environments, greater school involvement and a harmonious relationship with a son or daughter are factors in the parents’ control can help their children’s maths skills.

Hot weather forecast: When will the heatwave end in the UK?

Hot weather forecast: When will the heatwave end in the UK?