The Carolinas are facing an increasingly deadly threat in their waters: flesh-eating bacteria.

Vibrio is a bacteria that is emerging more and more often off the waters of the North Carolina and South Carolina coast.

According to The State, the instances of vibrio being found in the rivers, sounds, and creeks of the region has soared as a result of climate change.

The warming of the Earth is causing sea levels to rise and storms such as hurricanes to intensify, both resulting in the natural spreading of the coastal water and the bacteria living within it. Additionally, vibrio is believed to be more dangerous in warmer temperatures.

Some of the common ways people can acquire vibrio infections are through swimming or handling seafood, such as crabs and shrimp.

The State reports that illness stemming from toxic vibrio have tripled since 2007 in South Carolina and doubled in North Carolina over the same timeframe; there have been over 500 cases of illness since then.

Meanwhile, cases of toxic vibrio around the country have doubled since 2007. There are 1,200 to 2,000 cases a year, per the CDC, but the government organization estimates the annual amount of those infected is around 80,000 people. 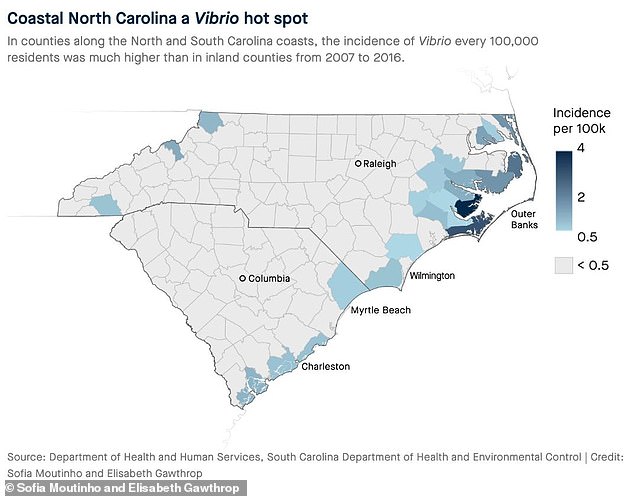 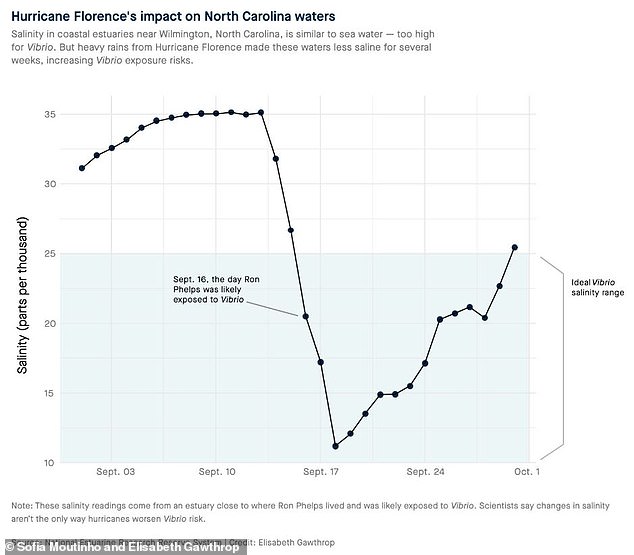 Hurricane rains can decrease the salinity of water, increasing the potential for exposure

‘It has already become a bigger problem in the last 10 or 12 years,’ University of South Carolina scientist Geoff Scott told The State.

‘This is going to have a substantial increase in health care concerns and health care costs, and compromise the safety of our waters.’

Vibrio infections can be hard to diagnose and often need to be treated quickly, before the size of sores and wounds increases.

Getting that treatment quickly in a hospital is even more challenging now due to the coronavirus pandemic.

Vibrio is still not believed to be a commonly occurring cause of infections in the state – North Carolina doesn’t even test for it in the water of their beaches. 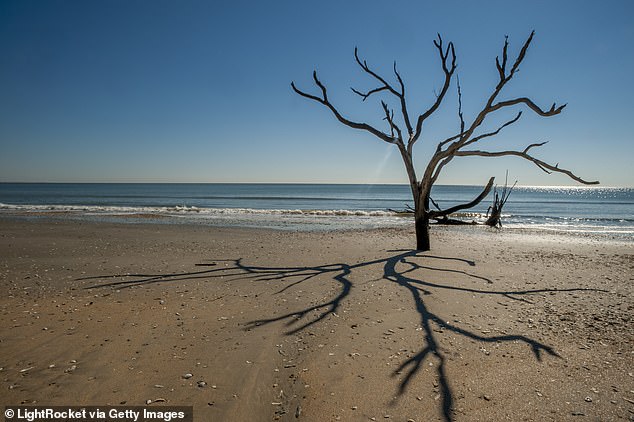 Vibrio exposure is most likely to take place through water in rivers, creeks, and sounds 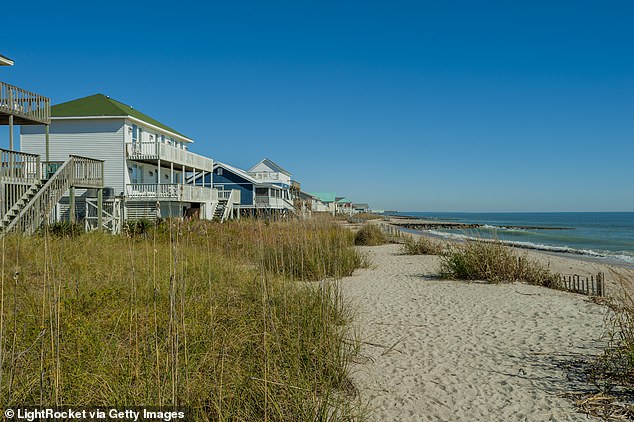 The Carolinas are a major hub for vibrio, but cases of infection are on the rise nationwide

But those in poor health and with liver problems can succumb to the microbe and many others are scarred forever.

For instance, vibrio vulnificus, the most toxic form of the bacteria, can sometimes lead to patients getting their legs or arms amputated to stave off further infection.

Those that contract sepsis while infected by vibrio vulnificus only survive half the time, according to the American Academy of Family Physicians.

‘You can get sick within just hours of exposure,’ Medical University of South Carolina’s John Gnann told The State.

‘If you’re badly infected and particularly if you don’t seek medical care quickly enough, you can certainly be dead in a day or two.’ 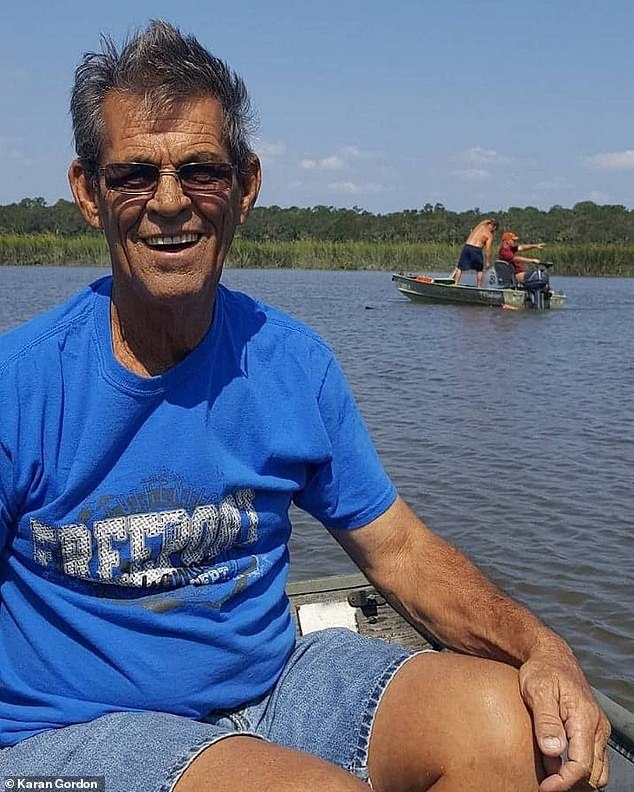 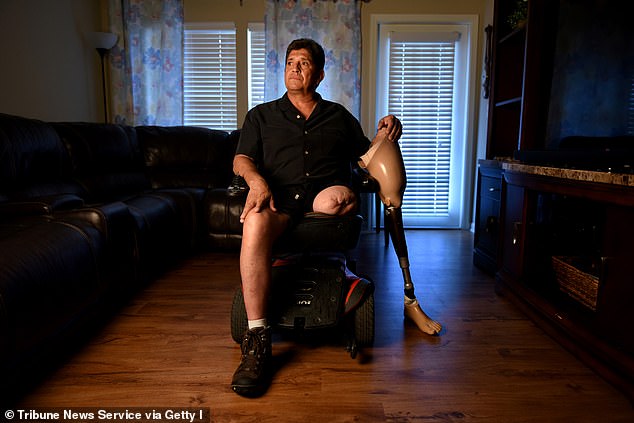 Jose Luis Ruiz survived his infection, but lost his leg and lives in pain years after infection

Billy Bailey died within days of being bitten by a crab on Big Bay Creek in October 2017. He experienced shivering, coldness, an upset stomach, and difficulty walking before dying in a hospital.

Ron Phelps, 85, scraped his leg while cleaning up after Hurricane Florence in 2018. Days later, he collapsed; doctors amputated his leg, but ultimately couldn’t save his life.

Phelps was one of at least 14 people who contracted a vibrio infection in North Carolina after Hurricane Florence.

Eddie Clinton, 68, survived his vibrio infection, but fell into a coma for a week and a half, had one of his legs amputated, and remained in the hospital for 93 days.

There’s still a lot to learn about vibrio infections and a greater need for local states to study and track them.

Infections are likely to increase as the effects of climate change increase, however.

‘Vibrio simply falls to a much lower priority and it can soon turn into a significant public health threat,’ said Glenn Morris, the University of Florida’s director of the emerging pathogens institute.

Vibrio is a bacteria that is often found in warm water, particularly off the coast of North Carolina and South Carolina.

The presence of vibrio in the local communities is increasing due to rising sea levels and stronger storms, brought on by climate change. 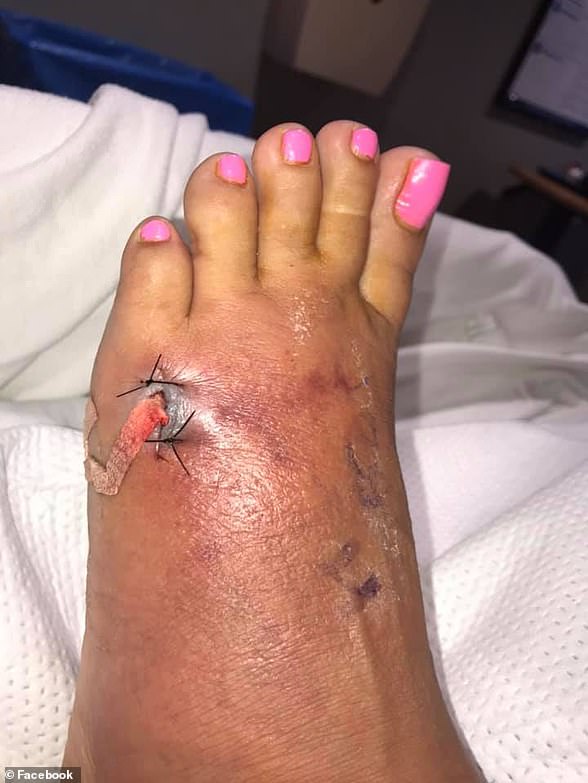 A case of flesh-eating bacteria landed a Florida woman in the hospital recently after she entered the water with a small cut on her foot on July 5, 2019

The CDC reports anywhere from 1,200 to 2,000 cases of toxic vibrio infections annually around the United States.

Cases are historically underreported, however, and the CDC estimates there could be around 80,000 toxic vibrio infections each year.

Infections can result in giant wounds, emergency amputations, sepsis, and even death.

A Florida man said it was adrenaline that sent him desperately diving into a pond to save his beloved dog from the mighty...
Read more
U.S

Coronavirus infects only FOUR per cent of children, study finds

Children are far less likely to suffer from Covid-19, a new study has confirmed, with just four per cent of children admitted to...
Read more

Staying healthy and prolonging your life span takes a lifelong commitment. A person has to be committed to a certain lifestyle which would...
Read more

A Florida man said it was adrenaline that sent him desperately diving into a pond to save his beloved dog from the mighty...
Read more