Conservationists have called for urgent action to save parasites before they go extinct, hailing the creatures as essential for the environment.

Parasites, which survive by living on another organism, have a ‘bad PR problem’ and are therefore thought of as something to eradicate, US researchers say.

Despite their bad reputation, only 4 per cent of known parasites can infect humans, and the majority actually serve critical ecological roles.

Some parasites regulate wildlife that might otherwise balloon in population size and become pests, for example.

About a dozen leading parasite ecologists have published a paper laying out an ambitious global conservation plan for the unpopular critters.

The team propose 12 steps for conserving parasites that do not threaten human health or the domesticated ‘host’ species on which they rely on. 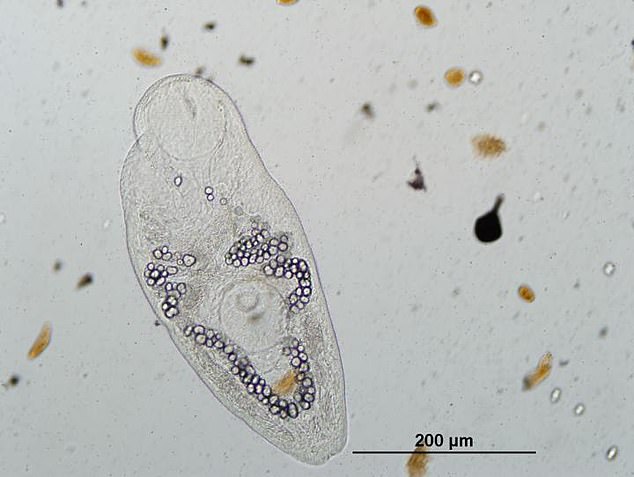 Pictured, Ribeiroia ondatrae, which is a parasite that causes amphibian limb malformations. None of the parasites that infect humans or domesticated animals are included in the researchers’ conservation plan

WHAT IS A PARASITE?

A parasite is an organism which lives inside another living organism, and depends on other creatures in order to stay alive. They often harm their host in the process.

Many different parasites affect humans and they can transmit deadly diseases such as malaria and trichomoniasis, which can be passed on during sex.

Around three quarters of parasites are so small they’re not visible to the human eye but some, such as worms, may grow much larger.

Examples of parasites which may live in humans include tapeworms and roundworm, which both live in the digestive tract.

‘Parasites are an incredibly diverse group of species, but as a society, we do not recognise this biological diversity as valuable,’ said Chelsea Wood, an assistant professor in the UW School of Aquatic and Fishery Sciences.

‘The point of this paper is to emphasise that we are losing parasites and the functions they serve without even recognising it.’

A parasite is an organism that lives on or in an organism, known as its host, and gets its food from or at the expense of its this animal.

Parasites are typically associated with deadly diseases – in humans, malaria, a well-known parasitic disease, causes hundreds of thousands of deaths per year.

But the reputation of dangerous parasites have likely eclipsed other less harmful parasitic lifeforms in the public eye.

Mistletoe, for example, is a parasite that doesn’t make all its own food, like other plants do.

It has no roots of its own, so it can’t get nutrients from the soil, and so it grows on other trees and sucks food and water directly from their trunk.

For example, some parasites first infect fish or amphibians, but ultimately must get transmitted to birds to reproduce and multiply.

They ensure that this happens through ‘ingenious ways’, the researchers say.

Often they manipulate the behaviour or even the anatomy of their first host to make them more susceptible to being eaten.

For example, toxoplasma gondii, a parasitic eukaryote, is known to remove rodents’ fear of cats and make them more careless in their presence.

This increases the chances of being passed from the rodent to the cat, its definite host and ultimate destination. 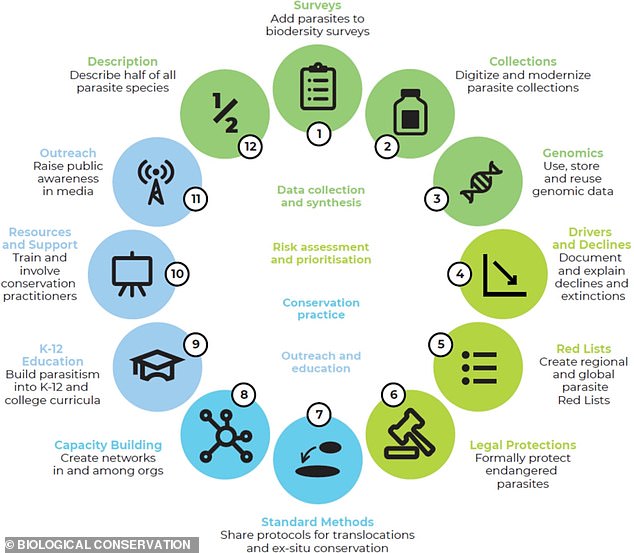 The authors propose 12 goals for the next decade that could advance parasite biodiversity conservation through a mix of research, advocacy and management

Only about 10 per cent of parasites have been identified and, as a result, they are generally left out of conservation efforts, the researchers say.

They propose 12 goals for the next decade that could advance parasite conservation, including describing half of the world’s parasites within the next 10 years.

Providing taxonomic descriptions allow species to be named, which is an important part of the conservation process, they claim.

”If species don’t have a name, we can’t save them,’ said study co-author Colin Carlson at Georgetown University.

‘We’ve accepted that for decades about most animals and plants, but scientists have only discovered a fraction of a percentage of all the parasites on the planet.

‘Those are the last frontiers – the deep sea, deep space, and the world that’s living inside every species on Earth.’

Among the other 12 steps are gaining legal protections for parasite species, digitalising parasite resources to make them more accessible worldwide and introducing parasite studies into primary and secondary education.

Another goal is expanding the parasite coverage of the global IUCN Red List, the world’s most comprehensive inventory of the global conservation status of biological species. 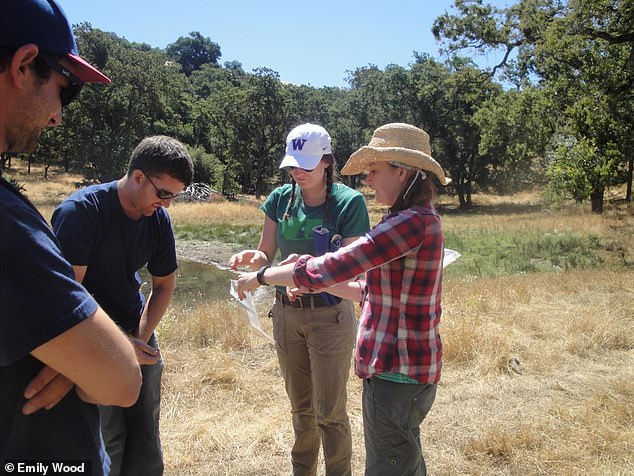 Chelsea Wood, right, and her team of researchers during field work. About a dozen leading parasite ecologists, including Wood, published a paper in the journal Biological Conservation, which lays out an ambitious global conservation plan for parasites

The researchers stress that none of the parasites that infect humans or domesticated animals are included in their conservation plan, which they say should be controlled to safeguard human and animal health.

The paper, published in the journal Biological Conservation, is part of an special edition devoted to parasite conservation.

Wood is the lead author on one study in the collection that finds the responses of parasites to environmental change are likely to be complex.

A changing world probably will see both outbreaks of some parasites and a total loss of other parasite species.

‘We need to recognise that there will be a diversity of responses among parasite taxa and not take for granted that every parasite is dwindling toward extinction or about to cause a major outbreak,’ Wood said.

‘The trick now is to figure out what traits will predict which parasites will decline and which will increase in response to biodiversity loss.’ 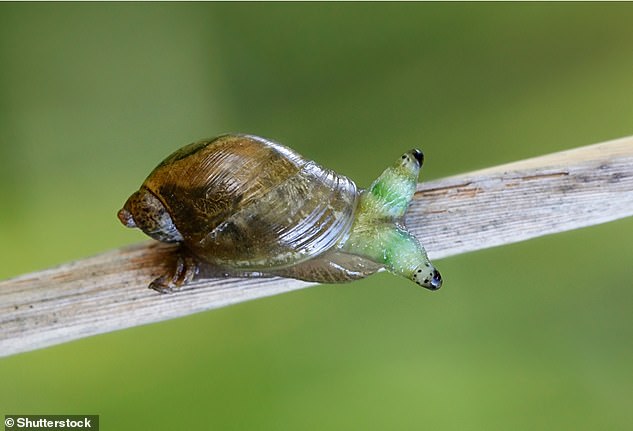 Wood’s lab is working reconstructing the history of parasites over time, documenting which parasites increased in abundance and which declined.

However, there’s almost no historical record of parasites and without this information and it’s difficult to know how to conserve them.

By dissecting museum specimens of fish, the researchers are identifying and counting various parasites found in the specimens at different places and times.

‘These pickled animals are like parasite time capsules – we can open them up and identify the parasites that infected a fish at its death.

‘In this way, we can reconstruct and resurrect information that previously we didn’t think was possible to get.’