Britons are being urged to celebrate the summer solstice outdoors this weekend as a National Trust poll reveals the coronavirus lockdown has revived our love of nature.

A third of British adults are more interested in nature as a result of lockdown and more than half plan to make a habit of spending time surrounded by nature when things are back to normal, the study reveals.

The conservation charity is therefore encouraging people to step outside on Saturday June 20 to enjoy the summer solstice – the longest day of the year.

Solstices occur when the planet’s geographical pole in the Northern or Southern Hemisphere is most greatly inclined towards the sun.

Despite the lockdown measures, the National Trust wants Brits to post photos online of wildlife and flowers at dawn or sunset in their garden, park or local green space using the hashtag #EveryoneNeedsNature, to mark the event. 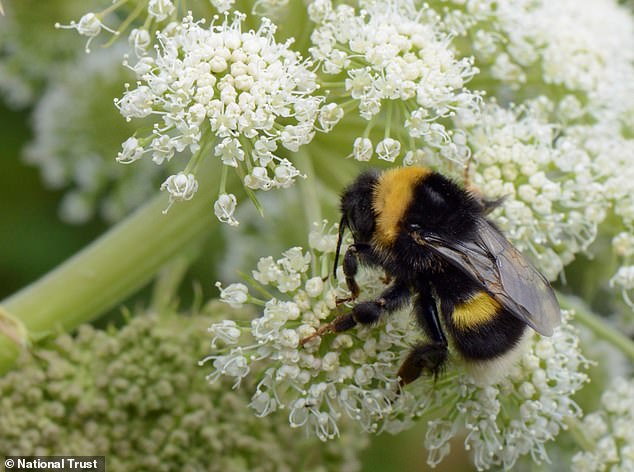 The poll, commissioned by the National Trust, has revealed how an increased relationship with nature appears to have helped people across the UK since the coronavirus pandemic outbreak in March.

‘Although we suspected that nature was providing the nation some level of comfort during these distressing and unprecedented times, we wanted to get a better understanding of how it was helping people through this period,’ said Andy Beer, director of the Midlands at the National Trust.

‘The results tell us that people have found spending time in nature or seeing nature has had a positive effect on their mood, and hopefully therefore, helped their mental wellbeing. 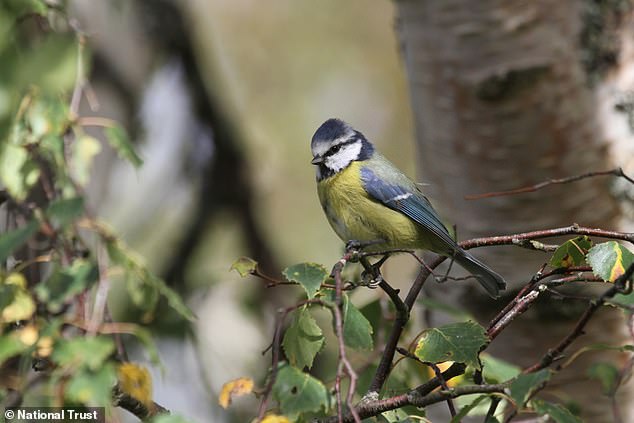 ‘Mounting evidence shows that everyday connections with nature has a positive impact on mental health and wellbeing.

‘The fact that people are recognising so fully how nature has helped them during the crisis can only be a good thing for people, nature and wildlife.’

According to the poll of 2,103 UK adults conducted online during lockdown, more than two thirds – or 68 per cent – either agreed or strongly agreed that spending time noticing nature around them has made them feel happy during lockdown.

In total, 55 per cent plan to make a habit of spending ‘as much time in nature’ once the lockdown completely lifts. 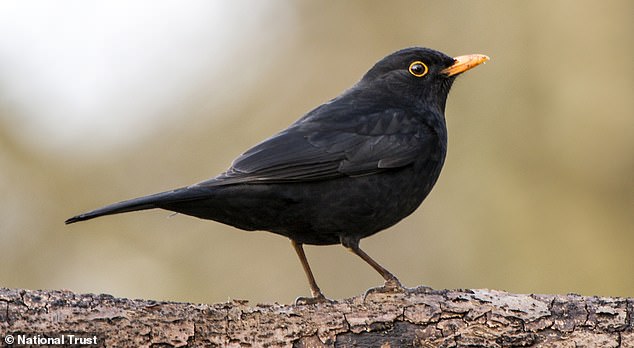 A blackbird during a dawn chorus. The National Trust is encouraging people to take notice of nature over the solstice weekend, by watching out at dawn or dusk, wherever they are

Since lockdown, levels of interest in nature have risen 33 per cent overall but grown most fervently in the younger age group – a rise of 40 per cent in the 25 to 34 age group category.

41 per cent of all respondents also said they are spending a little or a lot more time surrounded by nature in the past two weeks as lockdown starts to ease, compared with this time last year.

‘Both play an active part in managing our emotions and moods, and our results show they have done so during what has been a difficult time. 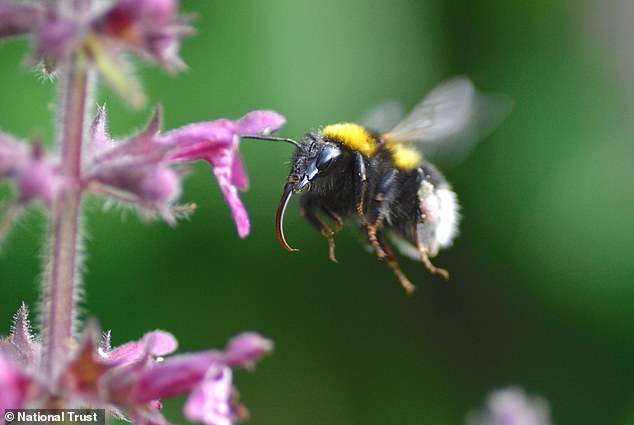 An incredible close-up of a bee on hedge woundwort (Stachys sylvatica) at Trelissick, Cornwall

‘It’s great to see that many people have found a friend in nature and long may that continue, because a close relationship with the natural world leads people to do good for nature in their everyday behaviour.

‘That’s why it’s important to tune in and celebrate nature – being in touch with the passing of the seasons and events such as the summer solstice can play a part in developing that close and meaningful relationship.’

The National Trust survey also revealed that those who get up early have a greater affinity for activities involving nature and the outdoors, such as going for a walk and listening to the dawn chorus.

Night owls, meanwhile, are more inclined to enjoy cultural activities or entertainment, including gaming, watching TV and listening to music. 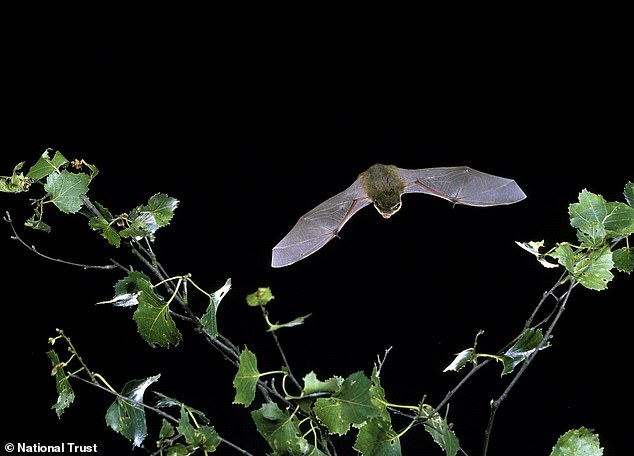 More than a third of respondents – 37 per cent – claimed to have also noticed the changing seasons more than they did last year and 22 per cent said they had experienced more sunrises or sunsets compared to last year.

As many as 90 per cent of all respondents said they don’t celebrate the longest day of the year, despite three quarters of them knowing when it falls.

This weekend’s event is therefore a good starting point to reconnect with nature as we emerge from lockdown – although some people may currently be restricted by a lack of access to green space. 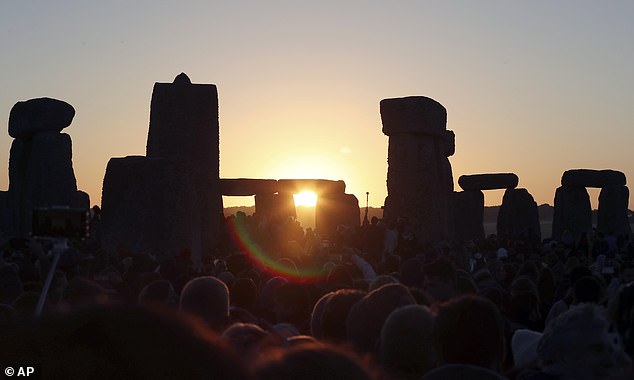 Pagans, druids and travellers in lockdown will have the chance to witness the sunrise during the summer solstice from Stonehenge live online for the first time

Stonehenge in Wiltshire usually hosts thousands of people to mark the summer solstice sunrise and sunset.

However, due to lockdown, the world-famous Neolithic monument is closed to visitors – although English Heritage plans to livestream the event on its Facebook page.

The National Trust, meanwhile, has a webpage dedicated to suggested activities for the weekend, after which the days start to draw in as we approach winter.

Brits can expect an abundance of robins and blackbirds in first light of the summer solstice morning as they poke at the ground for worms, as well as an variety of interesting moth species during sunset. 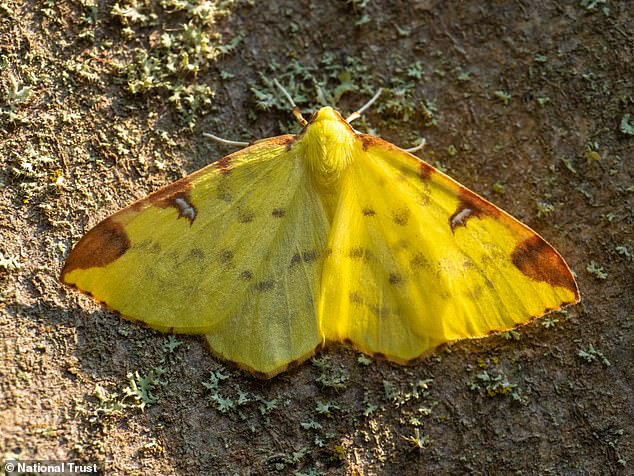 A Brimstone moth at Sheringham Park, Norfolk. One creature to look out for during the sunset is the weird and wonderful moth, according to the National Trust

The National Trust is asking Brits to use the hashtag #EveryoneNeedsNature over the solstice weekend when they share photos of the outdoors on social media channels.

‘If the only good thing that has come out of the pandemic is that more people have a better connection to the natural world, then that has to be a good thing and we want to do more to help signpost moments of nature’s calendar for people to engage with,’ said Beer.

‘It is heartening and reassuring that the drumbeat of the seasons is continuing and giving us all some small sense of normality.’

ALL YOU NEED TO KNOW ABOUT SUMMER SOLSTICE

What is the summer solstice?

The summer solstice occurs when the planet’s geographical pole in the Northern or Southern Hemisphere is most greatly inclined towards the sun.

In many countries around the world, this traditionally meant a time to relax, as it fell halfway between the start of the planting and harvesting seasons. In many cultures, traditions have centered on the day for centuries or even millennia. Notably, it marks the longest day of the year as well in terms of sunlight.

What is a solstice?

A solstice is one of two days a year – either a summer or winter solstice – in which the sun reaches either its lowest or highest point in the sky at noontime, marking both the shortest and longest days of the year.

When is summer solstice?

The summer solstice always takes place from June 20 to June 22 in the Northern Hemisphere. In 2018, it will take place on Thursday, June 21. Summer solstice 2018 will end on September 23, which signals the start of the autumn equinox.

What does summer solstice mean?

For many cultures around the world, a number of unique traditions – some of which date back millennia – are held on the summer solstice. This is particularly prevalent in many European countries since it marks the midway point between the traditional planting and harvesting seasons.

In many ancient cultures, the day was also believed to have special meaning to them, with several believing that the ‘veil’ between the physical and spirit worlds was the thinnest on the date.

In the UK, the summer solstice was famously marked on Stonehenge by pagans thousands of years ago, as the rising sun only reaches the center of the stone circle on one day of the year. The ancient monument was built between 3,000 and 1,600 B.C. and though its exact purpose is still shrouded in mystery, pagans are believed to have used it to mark the summer solstice as they believed the day possessed special power and meaning.

Elsewhere in the UK, the day is still often marked by Maypole dancing, picnics and bonfires. The Golowan Festival in Penzance, England is another popular summer solstice event in the UK. Sweden also marks the day with Maypole and folk dances, feasts featuring traditional foods and other customs. Norway and Finland often mark the day with bonfire celebrations while Iceland also celebrates with music, dancing and other traditions.

Revelers in Russia and Ukraine often know the day as Ivan’s Day or Kupala Night, celebrating with bonfires and parties. Celebrants in Austria mark the day by lighting bonfires across the country’s mountainous terrain, a tradition that dates back to medieval times, while revelers in China often celebrate with traditional meals and dragon boat races.

How to celebrate summer solstice

In addition to all of these traditional celebrations that still take place to this day, more modern summer solstice celebrations include daylong yoga events in Times Square in New York City, the Santa Barbara Summer Solstice Celebration in Santa Barbara, California and the Secret Solstice Midnight Sun Music Festival in Reykjavik, Iceland.

Uber launches grocery delivery in Latin America and Canada, with a US roll out expected end of July