Cute panda video: Twin cubs and their best friend nap side by side at a panda nursery in China

Three fluffy panda cubs have been introduced to the public by a heart-warming video that shows them napping side by side.

The baby bears, all female, were born in August at a breeding centre in north-western China.

Two of them are twins and the third is their best friend, which has been looked after alongside them in the same panda nursery. 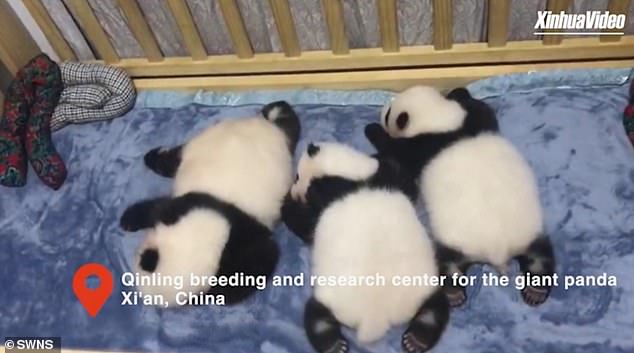 The cute video, released by Chinese state news agency Xinhua, shows the cuddly trio sporting black-and-white fur sleeping in a cot next to each other.

The clip shows them lying on a blue blanket made by their carers to keep them warm at the panda nursery of Qinling Giant Panda Research Centre in Shaanxi Province.

The eldest of them was born on August 17 to panda mother Yong Yong.

The cub, yet to be named, weighed 152 grams (5.36 ounces) at birth. She is the firstborn of six-year-old Yong Yong, which was also bred by the centre.

Their mother, Qin Qin, was the first panda to have been solely raised by keepers in Shaanxi. 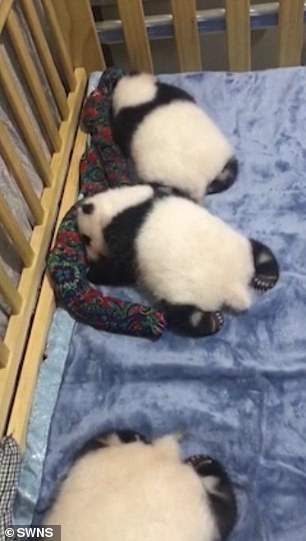 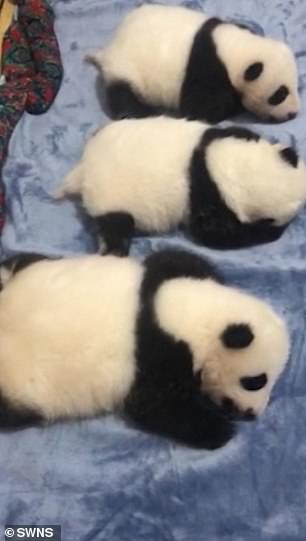 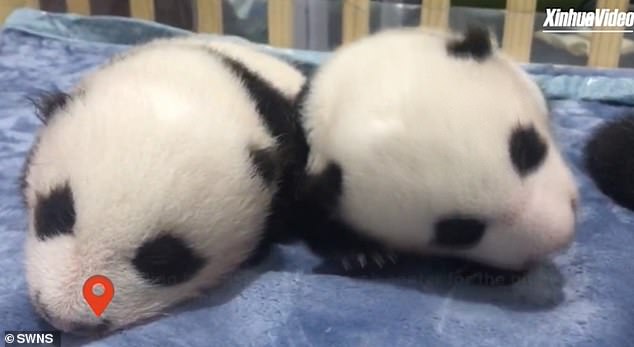 Keepers said the cubs were growing quickly and each of them weighed over 2,000 grams

Keepers said the three cubs were healthy and growing quickly. Each of them now weighs more than 2,000 grams (4.4 pounds).

One keeper told Xinhua that the three cubs had opened their eyes, an important step in a baby panda’s growth.

He noted that the centre was making sure to keep the cubs away from strong light to protect their eyes. 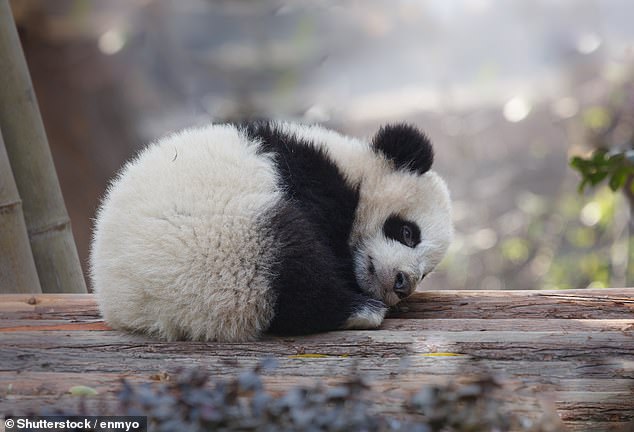 Pandas are born pink and hairless, and start to grow their coat from three weeks old (file photo)

The carer also said that this year’s temperatures were particularly low, so the nursery had taken extra steps to keep the cubs warm.

‘We made them this blanket, and if the weather is too cold, we would turn on the air conditioning and put a towel over them,’ he added while referring to the soft layer the cubs were snoozing on.

Pandas, a symbol of China, are renowned for its slow motion and lazy daily routine.

Adult pandas spend about half of their day sleeping and another half eating.

The giant panda was removed from the endangered species list in 2016 by The International Union for Conservation of Nature after years of intensive conservation efforts led by Chinese experts.

Why are panda cubs pink? 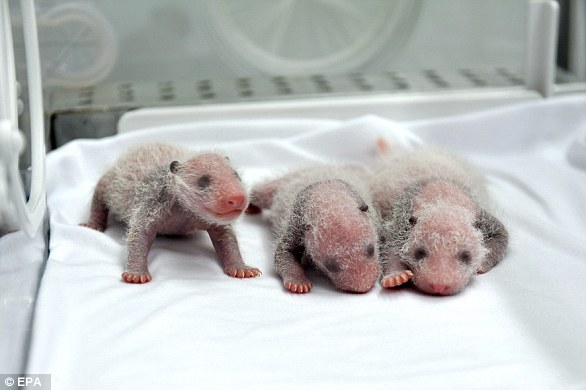 When pandas are born, they are hairless and pink. Their iconic black-and-white coat only starts to grow when they are about six months old

Most panda cubs are born in June, July and August.

When it is born, a baby panda is hairless and pink. It starts to have a black-and-white coat at around three weeks old.

A cub usually weighs 140 grams (4.9 ounces) at birth, or about one-thousandth of its mother’s weight.

At China’s Chengdu Research Base of Giant Panda Breeding, when a panda is born overweight, special care will be given by the keepers.

A baby panda is fed with breast milk from its mother. It starts to eat solid food, such as bamboo, when it reaches one year old.

Cubs do not open their eyes until they are six to eight weeks of age and are not mobile until three months old.

Panda cubs are born with soft fingernails, which will grow to be thick, hard claws.

At about five to seven months old, cubs are ready to climb trees.

Tesco: Supermarket to open for 24 hours in run-up to Christmas as shopping rules change

Tesco prides itself on helping its customers - and now it's doing so no matter what the time of day. The supermarket giant has...
Read more

Tesco: Supermarket to open for 24 hours in run-up to Christmas...