A cybersecurity firm has said it found a hacker selling data of 186 million US voters and the personal information of 245 million Americans.

Trustwave Spiderlabs said much of the information being sold on the dark web by a user named Greenmoon2019 is from publicly available records, however it is mixed with findings from various company hacks and together can help criminals easily target victims.

The firm also said that the database of names, emails, ages, and genders was paired with voter information which makes it for easier for foreign adversaries and bad actors to target Americans with political misinformation.

Approximately 400 data points for each person were provided, Trustwave said. A post on the dark web found at the end of September claimed that a third of the contacts had linked phone numbers too. 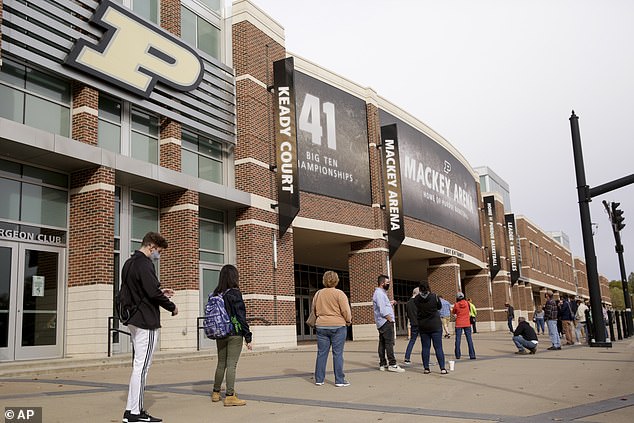 Voters line up outside Purdue University’s Mackey Arena for early voting ahead of the 2020 general election, in West Lafayette, Indiana on October 14. Data of registered voters has been sold online 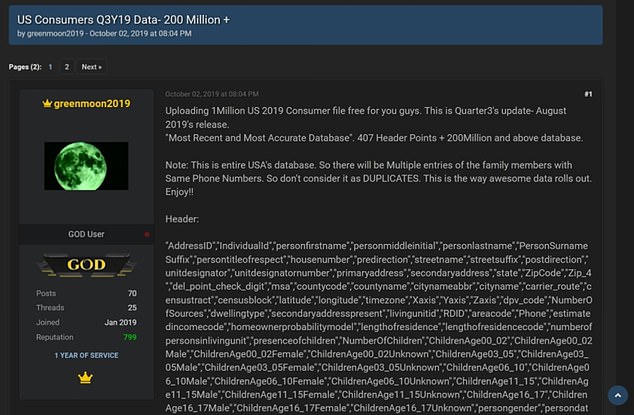 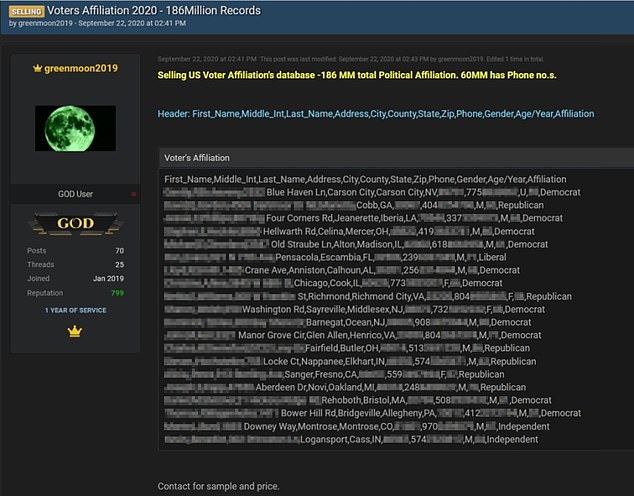 ‘GreenMoon2019 is not the only cybercriminal who offers US voter information however, he is the only one offering it for nearly the entire US population that we have seen,’ Trustwave wrote in a blog Wednesday.

‘Other cybercriminals offer detailed information about US voters in certain states. Sometimes that data is harvested directly from government web sites.’

One is example is the North Carolina Board of Elections database online.

Dark web users were seen commenting on how easy it was to gather voter information legally.

‘In the right hands, this voter and consumer data can easily be used for geotargeted disinformation campaigns over social media, email phishing and text and phone scams,’ Trustwaves’s vice president Ziv Mador said.

‘The fact that public records were used to help create the voter database does not make it any less dangerous than illegally obtained records from data breaches.

‘In fact, to a cybercriminal (who generally likes to take the least path of resistance) it is probably more enticing since the records will be more accurate and up to date.’

Trustwave wrote in a blog published Wednesday that it posed under various fake identities to obtain information about the seller.

The research firm learned that the hacker used a Bitcoin wallet to collect payments.

Although the identities of people making transactions aren’t easily traceable, Trustwave found a connection to a larger wallet that it believes has collected $100 million in illicit money since the account was opened in May.

The firm said not all of the funds are believed to be from the sales of bulk information.

Trustware obtained a sample of one million people and found the data to be accurate. The database included ethnicity, marital status, number of children and their ages, home value and purchase date, plus mortgage amount and lender 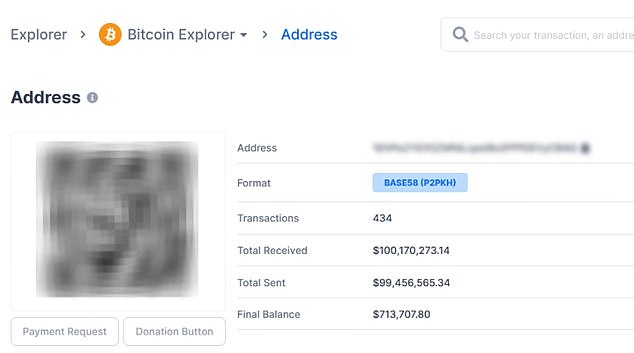 The research firm learned that the hacker used a Bitcoin wallet to collect payments. Trustwave  believes the hacker has collected $100 million in illicit money since the account opened in May

They also discovered databases with information about citizens Canada, UK, Ireland, South Africa and other countries

They also discovered databases with information about citizens Canada, UK, Ireland, South Africa and other countries.

Trustwave wrote online that a spreadsheet column about political affiliation was recently removed from the post discovered in September. However after contacting the seller they learned the information is still available.

The firm thinks the seller may have removed it from view to avoid unwanted attention that has ramped up recently in light of election meddling concerns.

US consumer data from 245 million people was shared by the user this summer. The entire population for the US in 2019 was 328.2 million people.

Trustware obtained a sample of one million people and found the data – including ethnicity, marital status, number of children and their ages, home value and purchase date, plus mortgage amount and lender – to be accurate.

The firm also said a long list of potential interests was included.

Trustwave turned its findings over to the FBI.

‘We are committed to finding and investigating fraud during this election,’ the FBI told NBC in a statement.

‘While we cannot comment on information we may or may not have received from the public, we want to assure the American people the FBI is closely coordinated with our federal, state, and local partners to safeguard our voting processes.’ 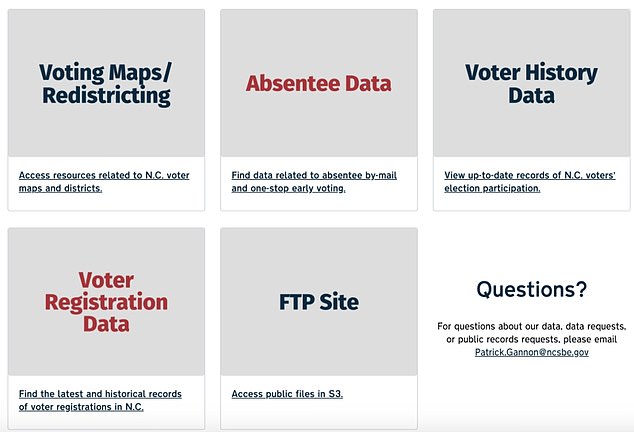 Most voter data is publicly available but alongside the hacked information could be dangerous in the wrong hands. Pictured is the website for North Carolina Board of Elections 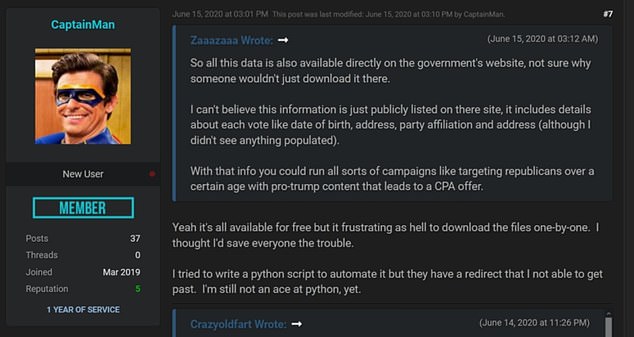 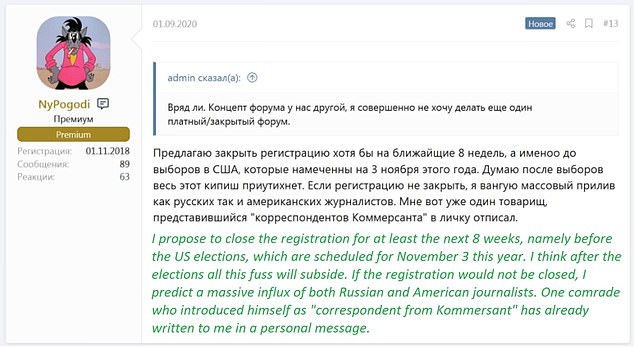 US officials accused Iran on Wednesday of being behind a flurry of emails sent to Democratic voters in multiple battleground states that appeared to be aimed at intimidating them into voting for President Donald Trump.

The officials did not lay out specific evidence for how they came to pinpoint Iran, but the activities attributed to Tehran would mark a significant escalation for a country some cybersecurity experts regard as a second-rate player in online espionage.

The announcement was made at a hastily called news conference 13 days before the election.

The allegations underscored the US government’s concern about efforts by foreign countries to influence the election by spreading false information meant to suppress voter turnout and undermine American confidence in the vote.

Such direct attempts to sway public opinion are more commonly associated with Moscow, which conducted a covert social media campaign in 2016 aimed at sowing discord and is again interfering this year, but the idea that Iran could be responsible suggested that those tactics have been adopted by other nations, too.

‘These actions are desperate attempts by desperate adversaries,’ said John Ratcliffe, the government’s national intelligence director, who, along with FBI Director Chris Wray, insisted the US would impose costs on foreign countries that interfere in the election and that the integrity of the vote remains sound.

‘You should be confident that your vote counts,’ Wray said. ‘Early, unverified claims to the contrary should be viewed with a healthy dose of skepticism.’ 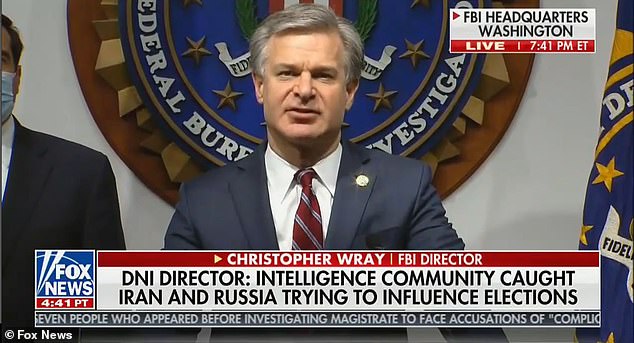 A fight is breaking out among Democrats over who Joe Biden should pick to be his Secretary of Agriculture. The president-elect has yet to...
Read more
U.S

There was a time when Peter Cross kept a photograph of Princess Anne in the spare bedroom of his Kent home.Signed by the...
Read more

America's Got Talent magicians The Rocketts, ages 13 and 15, are...
Read more

'I would be happy if he would stay here': Jurgen Klopp...
Read more

Speaking to the House of Commons on Thursday, Health Secretary Matt Hancock said: “The less any one person passes on the disease the...
Read more
Load more