Police in Birmingham, Alabama are hunting for the driver behind a deadly hit-and-run on Interstate 59.

The police released dashcam footage of the accident on Monday, showing the fatal incident that resulted in the death of a 59-year-old truck driver.

Footage captured the moment the suspect’s white car swerved in front of the tractor trailer, forcing it to slam on its breaks and swerve into the side of the highway.

The accident occurred around 5 p.m. local time on October 6.

Charles Eugene Pearce Jr. was killed when his tractor-trailer was hit by another vehicle, sending it into the median barrier and eventually dropping it on to the perpendicular highway below, according to AL.com. 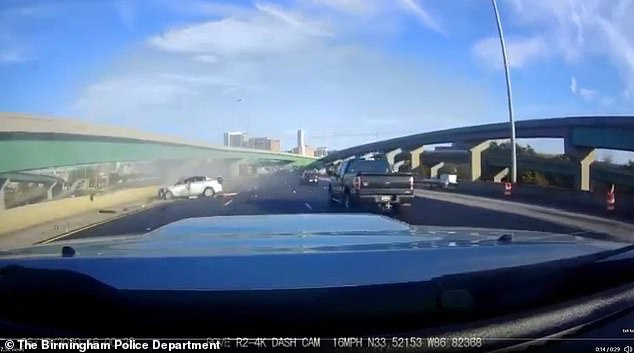 The white vehicle then sped away from the accident, as police continue to search for it

Pearce was pronounced dead at the scene, while another driver was taken to the UAB Hospital’s Trauma Center with non-life-threatening injuries. 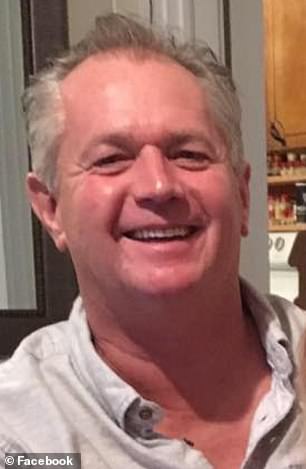 The tractor-trailer’s collision with the barrier was the end result of a chain of events caused by a white vehicle, as seen in the dashcam footage.

The unidentified white vehicle appears to swerve into a small silver sedan while entering the interstate off an interchange.

The sedan then went flying into the tractor-trailer, causing that vehicle to crash into a black SUV before hitting the median barrier.

Meanwhile, the white vehicle speeds away as other trailing vehicles come to a stop in front of the crash.

The Birmingham Police Department is hoping that by releasing the footage, someone will recognize the white vehicle and come forward with more information about the hit-and-run.

WKRG reports that 18-wheeler accidents appear to be on the rise in Birmingham, with at least five occurring in the last two months.

There is currently no other information about the incident, but the BPD are encouraging tipsters to call into the police department.

Houston father, 34, is jailed for 30 years for torturing his...
Read more
U.S

A person's secret impulse to take a risk can be spotted simply by the way they move a cursor across a computer screen,...
Read more

Houston father, 34, is jailed for 30 years for torturing his...
Read more

Faithful 8,400-year-old dog found buried with his master in Sweden

The remains of a Stone Age-era dog and his master were found buried together at an excavation site in Sweden, with clear photos...
Read more

Rory Underwood backs speedster Jonny May to chase down his England...

Faithful 8,400-year-old dog found buried with his master in Sweden