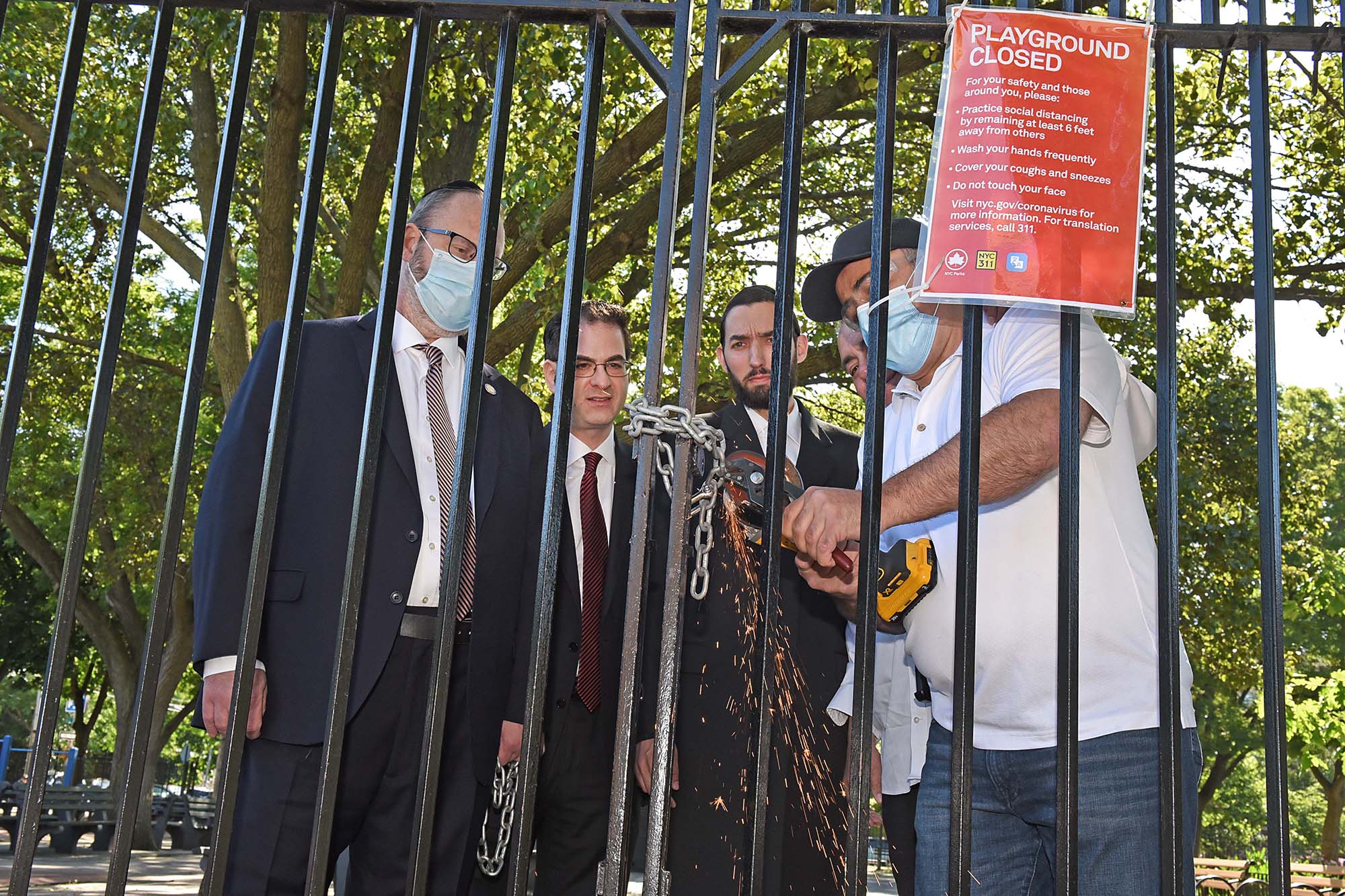 Videos circulating on social media recently show New York City Parks employees welding shut a playground in the heart of Hasidic Williamsburg, Brooklyn. We have seen footage of the New York Police Department and NYC Parks Police in Boro Park shepherding Hasidic children out of a park and locking it shut behind them.

Meanwhile, tens of thousands are allowed to protest in Brooklyn, while a maskless Mayor Bill de Blasio poses for photo-ops, ignoring the social-distancing guidelines his administration ruthlessly enforces against Jewish children and families.

The hypocrisy is stunning — and appalling.

And why are our children becoming the victims of this whiplash-inducing virtue-signaling?

If it were only the mayor taking dumb stances, perhaps we could chalk it up to de Blasio being de Blasio. But Gov. Andrew Cuomo isn’t exactly the beacon of leadership that he projected at the outset of this crisis. On Friday, he took the confounding step of banning sleepaway camps in New York state this summer.

Sleepaway camps: an enclosed campus where kids could be easily monitored and contained. Where city kids could go to get fresh air, run around and see their friends. (After all, they can’t go to the playground!)

So when New York City begins Phase Two at the end of June, a parent will be able to go to his office job, get a haircut at his local barbershop, then visit a clothing store to pick up a new pair of pants. But a child, who has been cooped up alone at home since March — can he go to camp or even the playground down the block? Heaven forfend!

And before you tell me that day camps are permitted to be open, yes, that’s true. But many have shut their doors owing to financial insecurity. And because of limiting guidelines, the ones that are remaining open can’t possibly sustain the thousands of children who are suddenly left with no plans for the summer.

When we enter Phase Three in July, as kids are still sitting at home twiddling their thumbs, adults will be permitted to dine inside restaurants, visit a spa and work out at the gym. And at the end of July, as kids become permanently fused to the sofa, their parents can take in Broadway shows or perhaps even attend concerts.

By the way, how are parents supposed to be able to rejoin the workforce and get our city back up and running if they’ve got children at home all day with nowhere to go?

And can someone point out to me the date when we anointed Cuomo emperor of New York State, and de Blasio king of New York City? Last time I checked, we lived in a democracy. The state of emergency has passed — the curve is flattened. Why are we still permitting elected leaders to unilaterally make decisions, with no input from legislators and stakeholders?

They serve us, the people. We aren’t subject to their whims, and our children don’t deserve to be pawns in this strange tug of war.

Our kids have suffered tremendously from this COVID-19 shutdown. They’ve missed out on so much, and they’ve lost out on experiences that can never be regained.

And you know what, as parents, we were willing to keep our kids at home to protect them, and to protect the people whom they would otherwise come in contact with. It was hard, but we did because it was the right thing to do. That was three months ago.

New York City’s kids have been through enough. Let us not be so heartless as to take away their summer, too.

Chaim Deutsch is a New York City councilman and a candidate for the US Congress in the Ninth District.

World on brink: The terrifying picture that shows how close US...