Debates 2020: Memes joke that mute button was a 'myth' after it was barely used

The mute button hung over the second and final presidential debate like a sword of Damocles on Thursday night – with many tuning in with the hope of seeing their least-favorite candidate getting cut off mid-sentence.

In the event the button hardly featured, the mere threat of it seemingly enough to get both candidates to (mostly) play by the rules – unlike the first event, which was marred by interruption.

That led many Twitter users to joke that the mute button was in fact a myth, like ‘Bigfoot, Nessie and Chupracabra’, in a series of tongue-in-cheek memes. 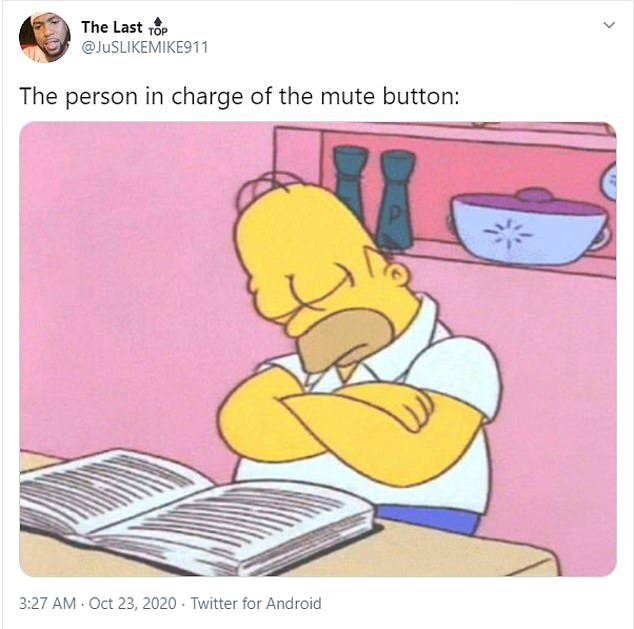 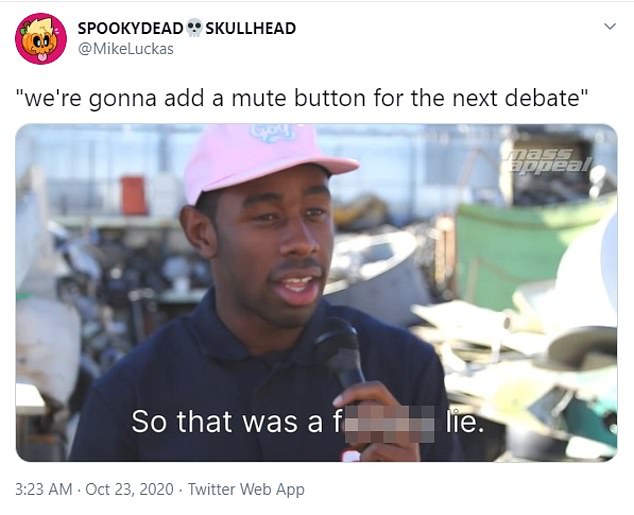 Viewers of the debate had clearly been hoping to see their least-favorite candidate getting cut off mid-sentence, but were largely disappointed 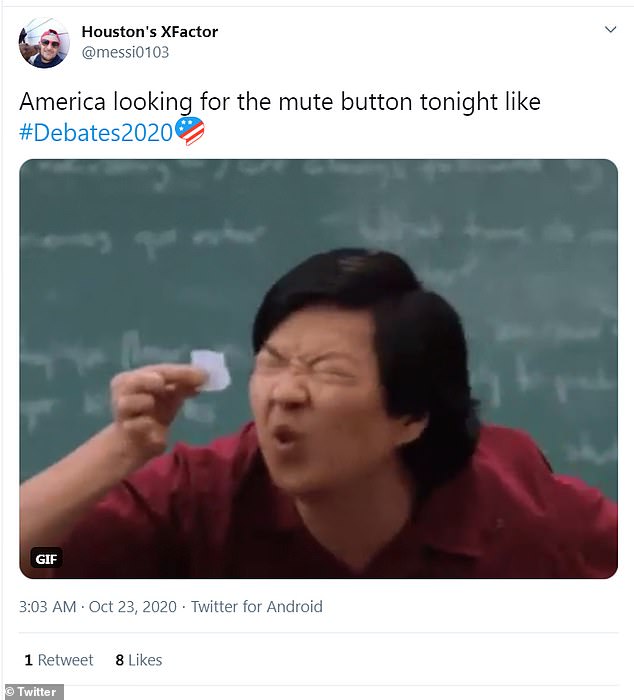 Viewers had been hoping to see liberal use of the mute button, but were left disappointed

Others felt cheated at seeing both candidates given large, uninterrupted stretches of airtime to push their policies, longing for a moment of schadenfreude in what was otherwise a substantive debate that stuck largely to the issues.

‘So the mute button isn’t being used tonight?’ one person quipped, over a gif of Obama shrugging his shoulders.

‘The person in charge of the mute button,’ another said, accompanied by an image of Homer Simpson asleep in a chair.

‘This debate has a fever and the only prescription is more mute button,’ said a third, posting an gif of the famous Will Ferrell ‘cowbell’ skit from SNL.

In fact, the mute button was used at least once, when Trump ran over his two-minute allotted time speaking about heathcare, around an hour in.

‘We are going to do an incredible job on health care, and…’ the President said, before being plunged into silence.

The button had been introduced after a raucous first debate that was marred by interruption, and largely turned into a verbal sparring match between the candidates, that focused little on ideas and more on point-scoring.

Whether because of that button this time or the terrible reviews in the first debate — especially for Trump — the candidates interrupted each other far less frequently Thursday night, even as they clashed on issues including the coronavirus, crime and global warming.

While Trump and Biden responded to the other’s answers — shaking their heads disapprovingly or smiling, in the case of Biden — the two largely avoided speaking over each other.

Trump, in particular, was on his best behavior, especially early on, and especially when it came to the moderator, whom he’d repeatedly denigrated before the debate.

‘So far, I respect very much the way you’re handling this,’ Trump said to NBC’s Kristen Welker when she gave him time to respond to Biden at one point. 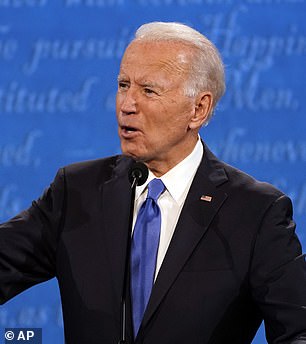 The mute button was introduced after the first debate turned into a verbal slugfest, but both candidates largely stuck to the rules on Thursday night 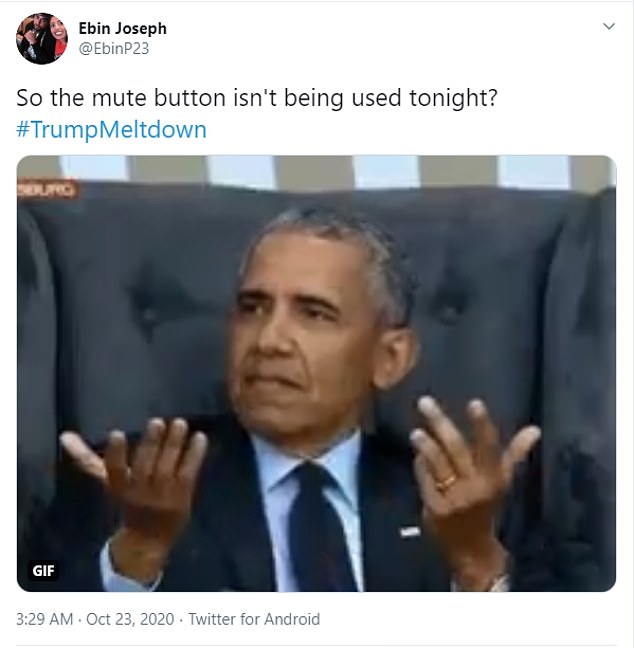 The mute button was available to use during the first two minutes of each new topic, to stop the candidates interrupting or running over, but was out of bounds after that – leaving some wondering whether it was worth having

Some theorized that the person operating the mute button had been kidnapped, or else had wandered away from their station 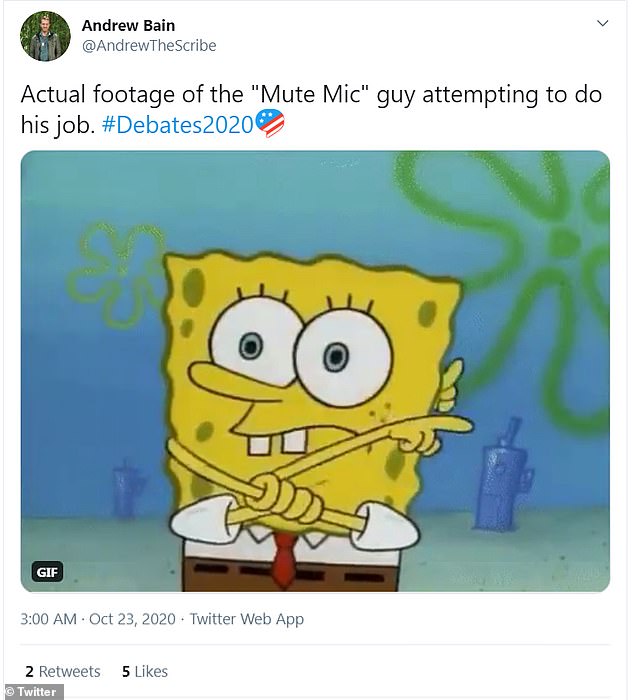 The scene inside the sparsely populated college arena was representative of the performance on stage.

The audience followed the rules exactly as laid out — they were remarkably silent throughout the 90-minute debate, and everyone appeared to be wearing masks.

Because of the pandemic, only around 200 people were seated inside the debate hall at Belmont University in Nashville.

That included a representative of the Commission on Presidential Debates, who was tasked with ensuring each candidate had a two full minutes of uninterrupted time to deliver opening answers on six major topics, according to debate commission chair Frank Fahrenkopf.

A member of each of the Trump and Biden campaigns monitored the person who controlled the mute button backstage, Fahrenkopf told The Associated Press, noting that the button would not be used beyond the first four minutes of each topic.

The button was among a handful of changes implemented by the nonpartisan debate commission to help ensure a more orderly debate following the raucous and widely criticized opening debate 23 days ago.

Coronavirus restrictions also remained in place, with attendees required to wear masks at all times and audience members distanced.

Organizers had initially planned to separate the candidates with plexiglass barriers, but the barrier were removed hours before the debate began.

A Trump campaign official said the decision was made after White House chief of staff Mark Meadows called Dr. Anthony Fauci, the nation’s highly respected top infectious-diseases expert, during a walkthrough of the venue site.

Meadows put Fauci on speakerphone, and Fauci told those in the room that all a barrier would do was provide a false sense of security, the official said. 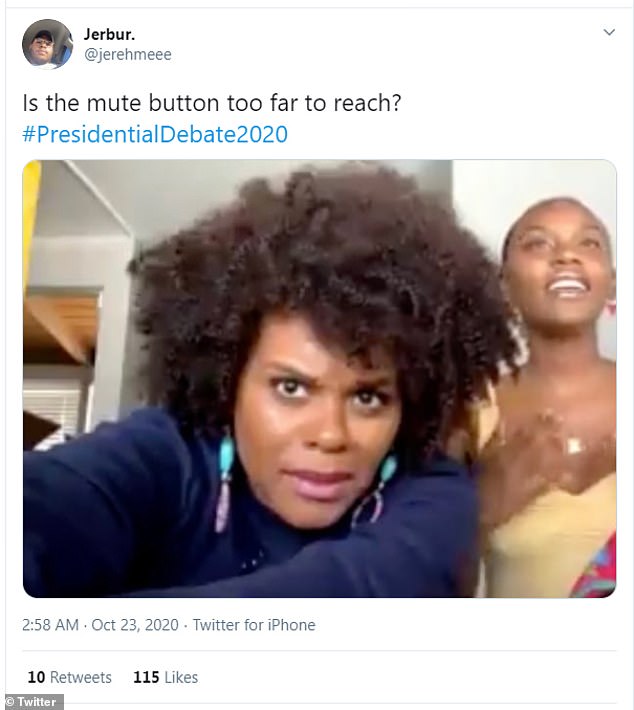 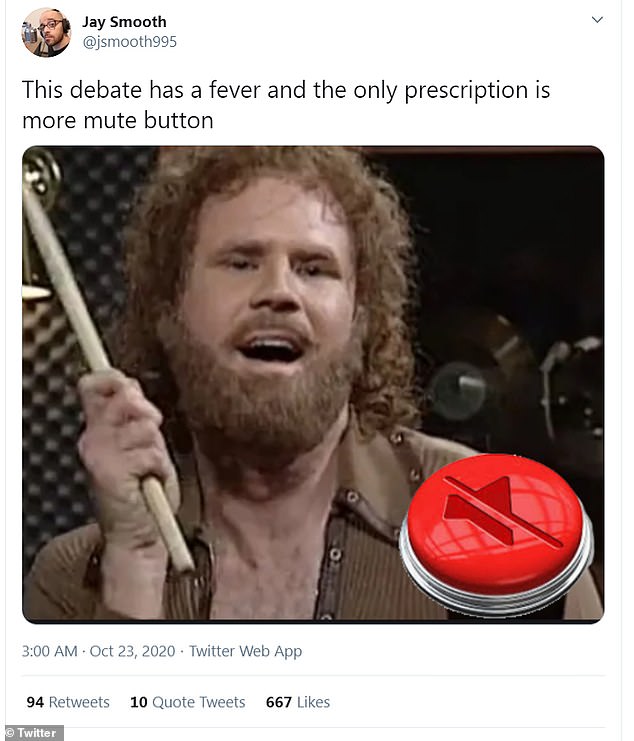 Others were clearly hoping to see more of the mute button, which in the end hardly made an appearance 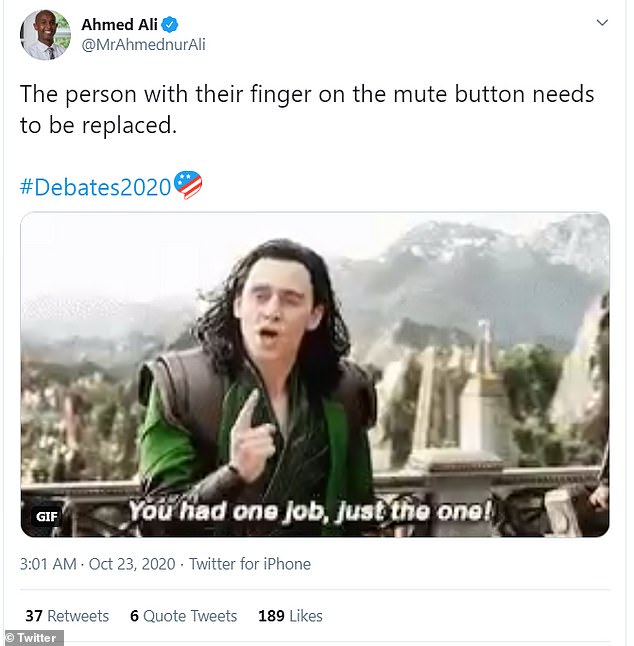 Others accused the moderators of failing their ‘only job’ 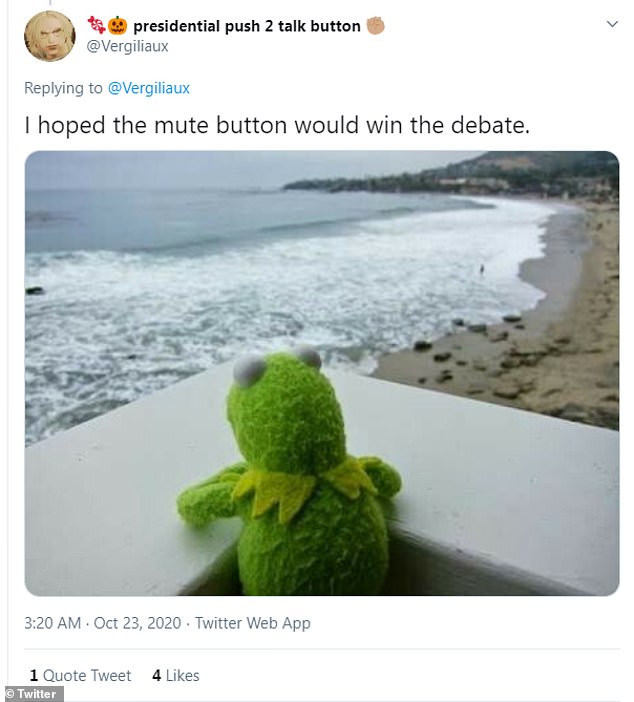 Trump was diagnosed with COVID-19 two days after the last debate, and he and the White House have refused to say whether he abided by commission rules and tested negative for the virus before that debate.

This time, Trump was given a test aboard Air Force One en route to Nashville on Thursday and tested negative, according to Meadows. Biden’s campaign reported he also tested negative.

The debate commission also tightened its rules on masks, with organizers saying that any audience member who refused to wear one would be removed.

Last month, several members of the Trump family removed their masks once seated in the debate hall, but were allowed to stay.

This time, first lady Melania Trump, appearing in public for the first time since her own coronavirus diagnosis, as well as other members of the Trump family wore masks throughout.

Before the debate began, Fahrenkopf repeated the instruction to the small audience.

‘If you won’t leave, you’ll be escorted,’ he said.

Fahrenkopf had said in an earlier interview that the safety measures would help reduce the risk of infection.

‘The Trump campaign’s attitude was that the president was not contagious anymore, but we’re going to go with our medical advisers,’ he said.

As a result, the president of Belmont University called it ‘the safest place in America tonight.’

The university, a picturesque institution of more than 8,200 students just a mile from Nashville’s Music Row, also hosted a town hall-style debate between Democrat Barack Obama and Republican John McCain in 2008.

There was a far smaller audience this time around.

Only around 200 people were allowed inside, a mix of invited guests of the campaigns and the debate commission, students, the commission’s production team, security, and health and safety personnel.

All audience members and support staff were required to undergo coronavirus testing onsite and wore colored wristbands as evidence of their negative tests.

The crowd, which included a handful of Trump-supporting stars, such as Kid Rock and former golfer John Daly, was remarkably silent throughout the 90-minute debate.

During the event, dozens of protesters gathered just off campus beyond the security perimeter. One of them held a large white sign: ‘220,000 DEAD … Trump FAILED US.’

Trump boasts that he is ‘immune’ to COVID-19.

‘I can tell you from personal experience that I was in the hospital. I had it. And I got better. And I will tell you that I had something that they gave me, a therapeutic, I guess they would call it, some people could say it was a cure.

‘But I was in for a short period of time and I got better very fast or I wouldn’t be here tonight.

‘And now they say I’m immune. Whether it’s four months or a lifetime, nobody has been able to say that, but I’m immune.’

Trump emphatically claims he is the ‘least racist person in the room’ despite calling Black Lives Matter a ‘symbol of hate’.

‘I have criminal justice reform done, and prison reform, and opportunities, I took care of Black colleges and universities. I don’t know what to say. They could say anything.

Trump tells Biden he only ran for president because he and Obama failed.

Trump accuses Biden of taking money from China and Ukraine.

Trump says Americans can’t lock themselves ‘in a basement like Joe’ while speaking out against another lockdown.

‘We cannot lock ourselves up in a basement like Joe does. He has the ability to lock himself up. I don’t know, he’s obviously made a lot of money someplace, but he has this thing about living in a basement. People can’t do that.’

Biden sarcastically calls Trump ‘Abraham Lincoln’ after the president claimed he was the ‘least racist person in the room’.

‘Abraham Lincoln here is one of the most racist presidents we’ve had in modern history. He pours fuel on every single racist fire. This guy has a dog whistle as big as a foghorn’.

‘He’s legitimized North Korea. he’s talked about his good buddy – who’s a thug, a thug – and he talks about how we’re better off, and they have much more capable missiles able to reach US territory, much more easily than ever before.’

Biden dismisses Trump’s claim that the coronavirus ‘is going away’.

‘If you hear nothing else I say tonight, hear this … anyone that’s responsible for that many deaths should not remain president of the United States of America.’

Biden announces he will ‘transition from the oil industry’ in favor of renewable energy.

The Arctic's sweltering 2020 continues in earnest with temperatures last weekend reaching more than 5° (12°F) above the norm for the 1990s.  This alarming...
Read more
Load more