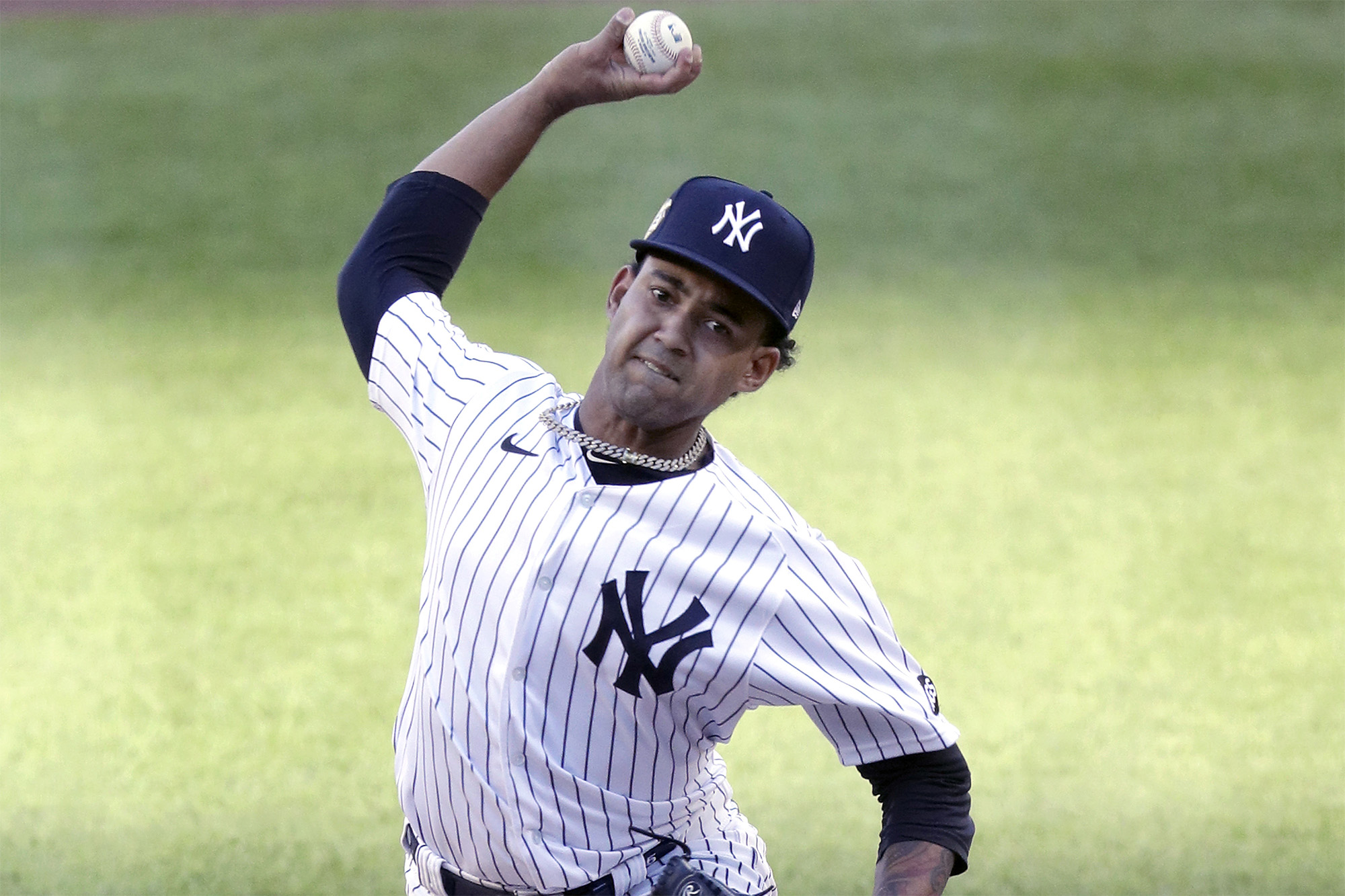 Pedro Martinez’ No. 45 will be etched on Deivi Garcia’s belt Tuesday night, when he starts the first of three crucial games against the Blue Jays at Yankee Stadium.

While pitching like his Hall of Fame idol would be welcomed by the Yankees, having Garcia duplicate his last outing will suffice for a team battling the Blue Jays for second place in the AL East and hasn’t given up hope of chasing down the front-running Rays.

The Yankees, Blue Jays, Rays and Indians — whom the Yankees are tied with in the two-team wild-card race — were idle Monday. The Rays hold a four-game lead over the Yankees entering Tuesday night’s action and the Blue Jays are one-half length ahead of the Yankees.

Asking a 21-year-old with three big-league starts to help the Yankees slide by the Blue Jays with 13 games left in the schedule might be daunting to other teams and youngsters, but that doesn’t seem to be the case here.

“The one thing about him, he is so unaffected by being up here in a totally good way. I don’t think there is any situation you can put him in, any kind of big game or pressure moment that will affect him one way or another,’’ Aaron Boone said Monday on SiriusXM’s MLB Network Radio.

Asked Sunday if, when Garcia thought about reaching the big leagues, he expected his early starts to be in such big moments, the youngster said being ready helped.

“That has always been in my head and the goal,’’ said Garcia, who pitched at three levels of the Yankees’ system last year. “It did happen fast for me, but at the same time, the preparation and many years of work and continuous preparation has allowed me to feel comfortable here.’’

Because the Blue Jays hitters will see him for the second time inside a week, Garcia was asked if he needs to change anything he did Wednesday, when he went away from a mediocre curveball and used a changeup and slider when facing the lineup for a third time. That strategy helped Garcia retire 18 of the final 20 hitters and improve to 1-1 with a 3.06 ERA.

“I don’t think so. The plan of attack is based on aggressiveness and being competitive out there, that’s the bottom line,’’ said Garcia, who limited the Blue Jays to two runs and five hits in seven innings Wednesday in a 7-2 Yankees victory. “Being competitive and able to execute.’’

Of course, a little more noise from the Yankees’ lineup would help the cause. In the final two games against a poor Orioles staff the Yankees scored five runs. In the four-game series, the Yankees hit .184 (7-for-38) with runners in scoring position but did score 16 runs in the first two games.

Third baseman Gio Urshela is due off the injured list Tuesday and Giancarlo Stanton and Aaron Judge could return this week. That trio should add some thunder to the lineup.

As for the pitching, which will get a boost from right-hander Jonathan Loaisiga’s return from the IL on Tuesday, Boone couldn’t have asked more from his starters, who have posted a 1.95 ERA in the previous nine outings and gave up two earned runs or fewer in that stretch. And the bullpen appears to be over the Buffalo bloodbath last week, when Chad Green and Adam Ottavino gave up 10 runs (nine earned) to the Blue Jays in sixth inning. Since then, the relievers haven’t allowed a run in 16 innings.

“The pitching continues to carry us through this stretch and knowing we are getting a couple of guys back on Tuesday to start the series, it is definitely exciting and hopefully we continue to play well,’’ Boone said.

Catching the Rays looks to be a bit out of reach. Going by the Blue Jays and playing well enough to be the fourth seed and getting home-field advantage in the first round isn’t.

Even if they are turning to a 21-year-old with three big-league starts and the hope he can keep them moving away from a 5-15 stretch that almost derailed their season.