President Donald Trump said his opponent Democrat Joe Biden was lucky because Attorney General Bill Barr was so ‘fair’ as he addressed a rally crowd chanting ‘lock him up’ Monday.

‘I know people who would have had him locked up five weeks ago,’ Trump told supporters at his Prescott, Arizona rally.

‘Somebody else would have taken this thing and all that c**p and corruption.’

But not Barr, in Trump’s mind, calling him a ‘very nice man.’

Ever since The New York Post published revelations of the contents of Hunter Biden’s laptop last week – which appeared to show him trading on his father’s name and doing deals in Ukraine and China as well as an alleged sex and drugs tape – the president has made it the center of his rallies.

The president’s comments on Barr Monday were prompted by a raucous ‘lock him up!’ chant, aimed at Trump’s Democratic opponent.

The comments – like much of the rest of the rally – bore little relationship to the script aides had prepared for the president, and at one point he said: ‘Isn’t this better than reading from the stupid teleprompter?’ 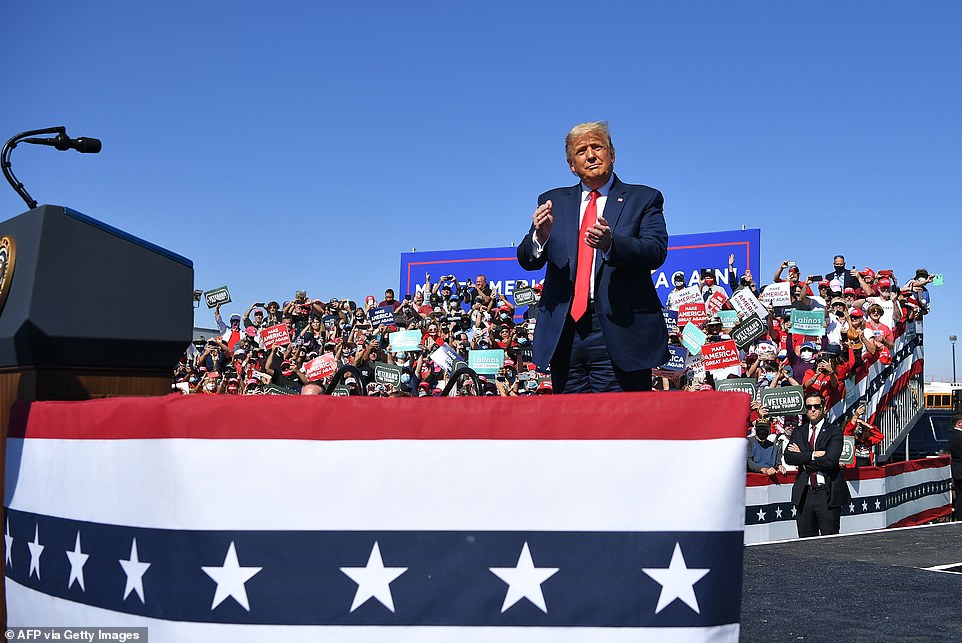 Attack on the Bidens: Donald Trump used a rally in Prescott, AZ, to say that the Bidens should be ‘locked up’ and put pressure on his AG, Bill Barr, to investigate the contents of Hunter’s laptop 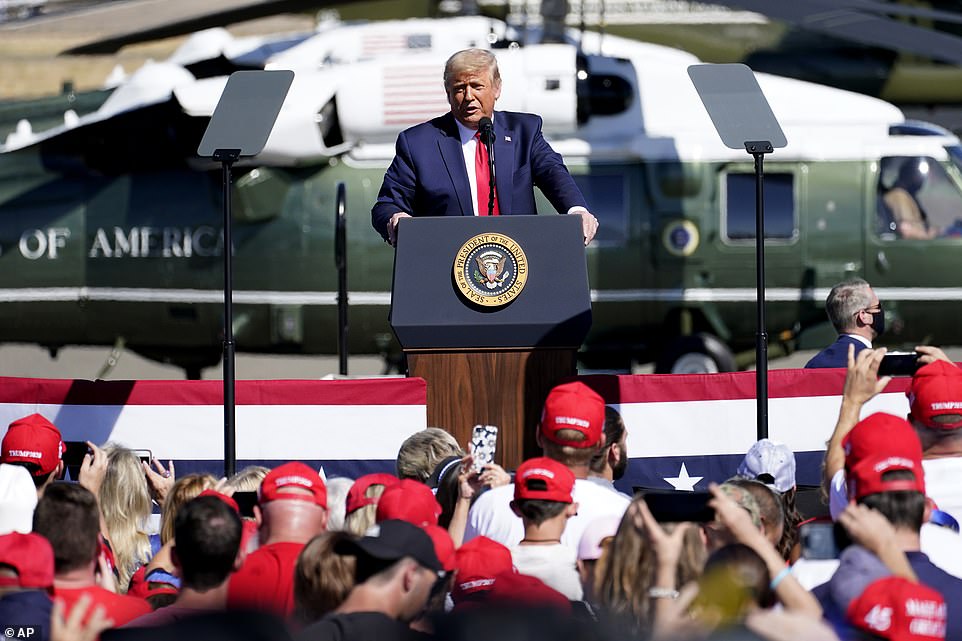 First rally of the day: Trump has been on a western campaign swing, going to Arizona which he won by 3.5 points in 2016 amid fears from his campaign that it could go for Biden, who has been ahead in the polls there. The swing has taken in California for a fundraiser and Nevada 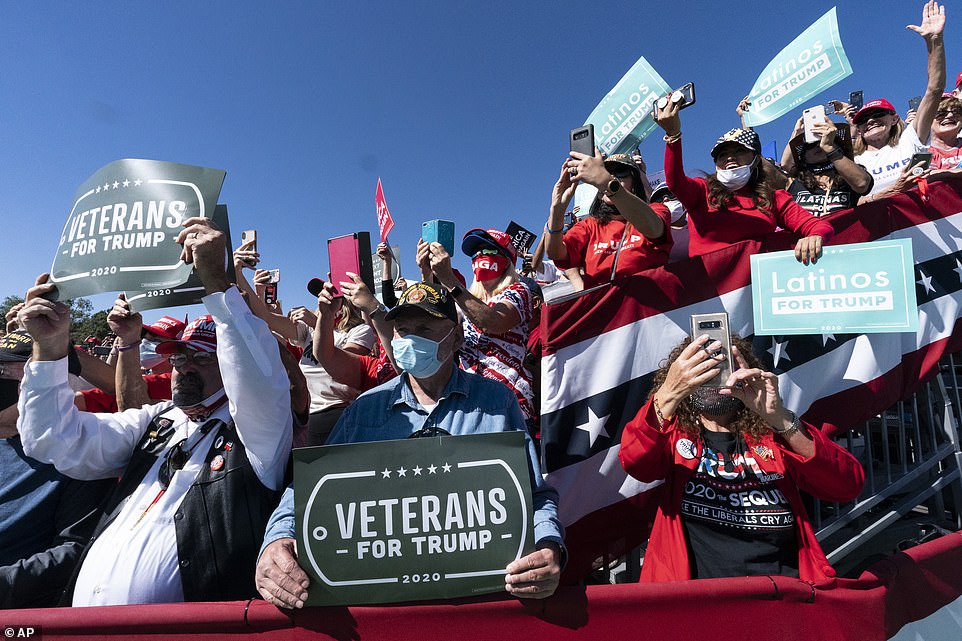 Supporters: Donald Trump fans were out in force for the rally, which also featured the state’s governor Doug Doocey and Martha McSally, its Republican senator who is running for election. She has already lost a race but was put in the late John McCain’s seat when he died 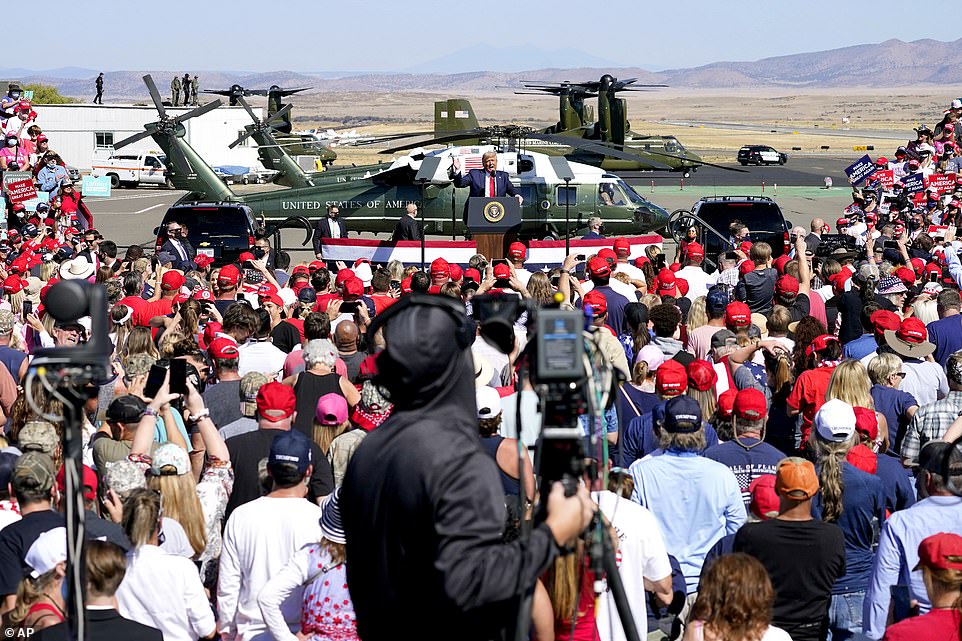 Raucous: In front of Marine One – a VH-60N White Hawk – and two Marine Corps Ospreys which escorted it, Trump spoke at Prescott Regional Airport to a large crowd, with no social distancing and many without masks 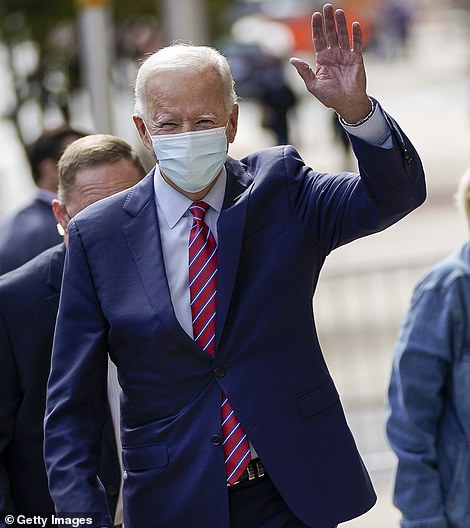 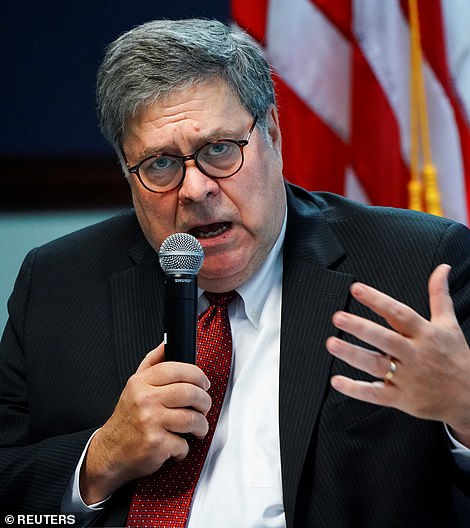 Not the focus of a probe: Donald Trump claimed that Joe Biden was not ‘locked up’ because Bill Barr is ‘a nice man’ 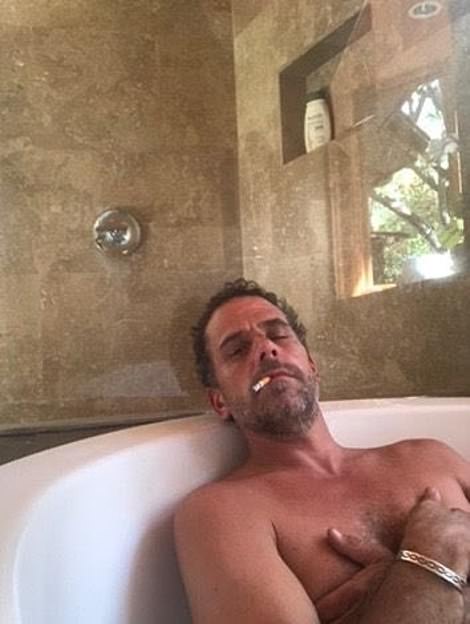 Center of campaign: Trump is now making Hunter Biden and the contents of his laptop the focus of his pitch to the American people for a second term

‘Can you imagine if Don Jr. had the same problems as ‘Where’s Hunter?” the president asked. He then joked that Ivanka sort of ‘floats through life.’

The Post story not only featured unverified emails, but photos of Hunter Biden doing drugs, the paper said. A copy of the harddrive was given to Rudy Giuliani.

The president continued to call it the ‘laptop from hell’ – comparing it to the laptop belonging to disgraced Democratic congressman Anthony Weiner, who was sexting ‘girls,’ as Trump put it.

He was referring to DailyMail.com’s revelation in August 2016 that Weiner had been sexting an underage girl. That lead to an FBI probe in the course of which agents found emails from Hillary Clinton’s secret server.

The FBI had to alert Congress that the Clinton emails investigation had been reopened because of content found on that laptop.

‘Ding ding ding ding – he got hacked too just like Scully got hacked,’ the president said, referencing the would-be moderator of the canceled second presidential debate, Steve Scully, who was put on administrative leave by the network after lying about tweeting to Trump critic Anthony Scaramucci.

The veiled hint that Barr should take an interest in the Bidens came as Trump on Monday lashed out at a traveling reporter who questioned his campaign’s constant focus on Hunter – calling the scribe a ‘criminal’ for failing to cover it.

‘And you know who is a criminal here? You’re a criminal for not reporting it,’ Trump scolded.

The president unleashed the attack shortly after he went after a New York Times report that cataloged ‘sobering political assessments’ of Republican political operatives that he might lose the election. He called his own rallies ‘boffo’ going and tore into the lead author of the piece.

It all happened on a day when he also ripped infectious disease expert Dr. Anthony Fauci and termed Fauci and other experts ‘idiots.’

And his campaign accused the Commission on Presidential Debates of being ‘swamp monsters’ who were helping Biden avoid having to answer questions about his son Hunter’s emails with a Ukrainian official during the final matchup before Election Day. 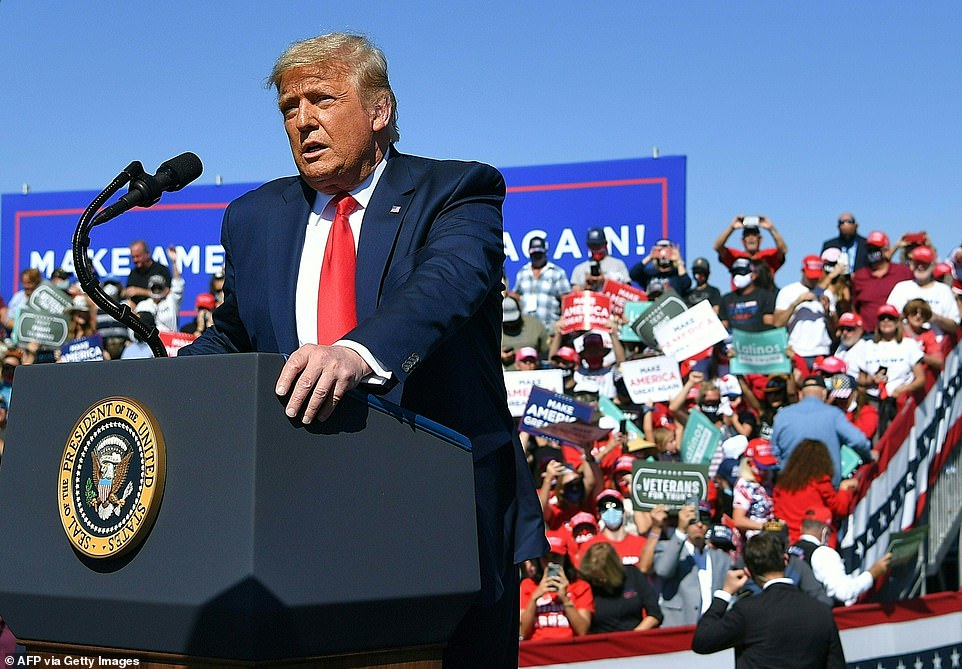 Targets: Donald Trump used the rally to unload on Dr. Fauci, CNN, the media, and Democrats – and to attack the Bidens as ‘criminal’ and ‘corrupt.’ 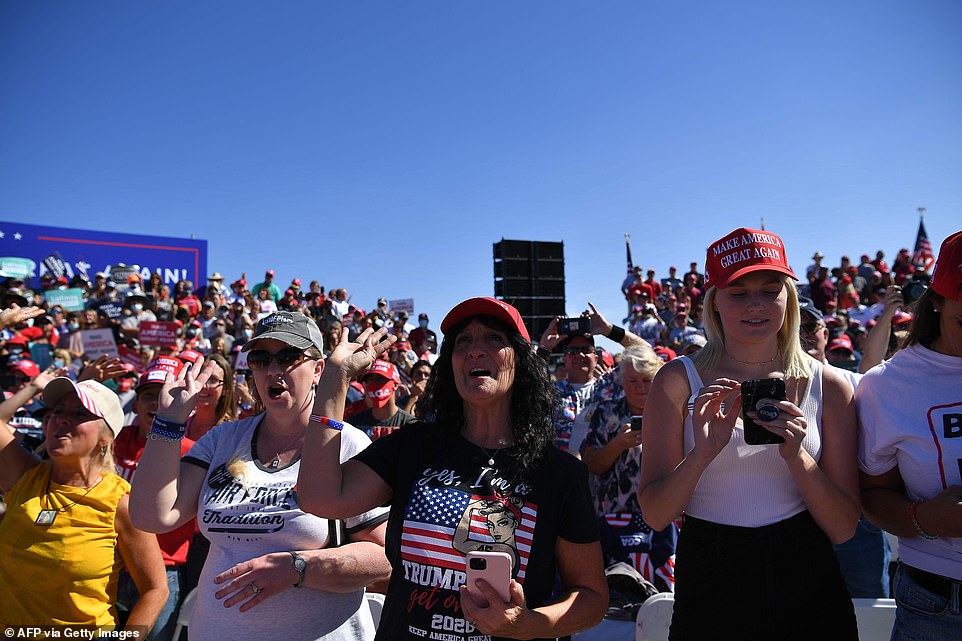 Four more years: Supporters chanted in unison for the president as he spoke, many of them ignoring public health advice to eschew masks for the rally 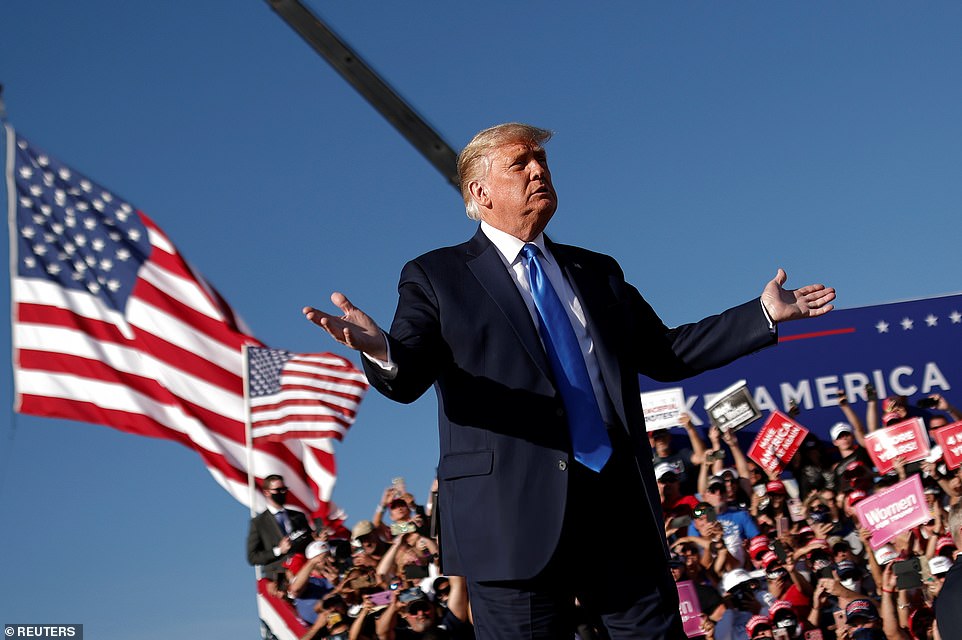 They formally requested it tear up the list of debate topics to focus on ‘foreign policy’ in an attempt to shift the subject to the Democratic nominee’s son.

Trump campaign manager Bill Stepien sent a formal letter to the commission asking for them to dismiss the topics chosen by the moderator, NBC’s Kristen Welker.

‘For the good of campaign integrity, and for the benefit of the American people, we urge you to rethink and reissue a set of topics for the October 22 debate with an emphasis on foreign policy,’ Stepien said.

He accused the commission – which is made up of both Republicans and Democrats – of being pro-Biden.

‘The Commission’s pro-Biden antics have turned the entire debate season into a fiasco and it is little wonder why the public has lost faith in its objectivity,’ he wrote.

Additionally, Jason Miller, a senior adviser on the Trump campaign, complained that the debate was supposed to be foreign policy focused but charged the commissioners, who he described as ‘swamp dinosaurs,’ changed it to a multi-topic format at the request of the Biden campaign.

‘This is supposed to be the foreign policy debate. The final debate is always the foreign policy debate. It was like in 2016. It’s been like for election cycle after election cycle. The debate commission is now trying to change the rules and make this about a whole host of different issues. And we believe this is the request of the Biden campaign,’ he said on a press call with reporters on Monday.

The Trump campaign, including the president himself, have pushed hard on the Hunter Biden story, saying it showed Joe Biden was a ‘criminal.’

The president blew up at a reporter Monday who asked him about that strategy.

‘He is a criminal. He got caught, and you know who is a criminal here? You’re criminal for not reporting it,’ Trump said after arriving in Arizona for a campaign rally.

And Miller’s criticism comes after President Trump held an expletive-filled phone call with campaign staff Monday where were he claimed he was on a path to victory, railed against a New York Times article that said his re-election bid was in trouble, and called Dr. Anthony Fauci an ‘idiot.’

Biden is leading the president in most major polls – both nationally and in the critical battleground states needed to win on November 3.

Weight loss goals can be worked towards as soon as you wake up. Eating the right breakfast is the best way to kickstart...
Read more

Gogglebox viewers were hoping they could tune in to the latest episode of the Channel 4 point-of-view programme to get some light relief...
Read more
Load more

Weight loss: How adding pistachios to your breakfast can help you...