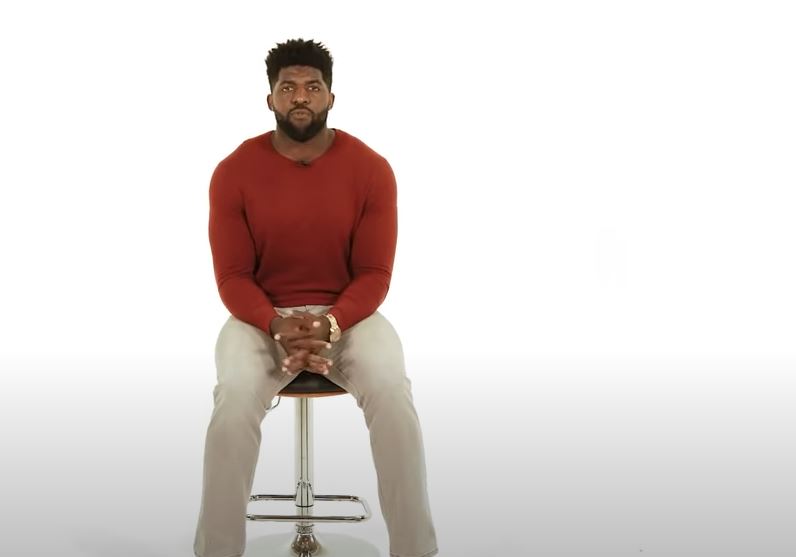 It is unusual that a 29-year-old sports media personality is about to start a big new job, and there is already speculation about what could be next.

Former NFL linebacker Emmanuel Acho said he’ll pass on being the next Michael Strahan, but maybe Oprah 2.0. It really doesn’t matter to him because he doesn’t believe in limiting himself with goals.

“I think I will be what hasn’t been,” Acho told The Post.

Acho, who played mostly for the Eagles, recently left ESPN to sign with Fox Sports. At ESPN, he was somewhat on the rise, appearing on college football coverage and “Get Up,” but was still down on the depth chart.

Since the protests over the death of George Floyd in police custody, Acho has taped three YouTube videos titled “Uncomfortable Conversations with a Black Man” that have been viewed nearly 40 million times.

They have landed him on CBS’ “Late Show with Stephen Colbert” with future guest spots on the other late night programs on the horizon.

On Wednesday, he will start his new job, replacing Jason Whitlock as Marcellus Wiley’s co-host on FS1’s “Speak For Yourself.”

In 2012, Acho had graduated from Texas with a sports management degree when the Browns took Acho in the sixth round. During his four-year playing career, he added a master’s degree in sports psychology from Texas.

He started the mobile series about race with no aspirations. The first was a well-received monologue. Then, Matthew McConaughey reached out to be on the second edition.

After Chip Gaines retweeted an episode, Acho contacted Gaines and had the “Fixer Upper” family on.

“Sports is a career for me, and I’m very good at it,” said Acho, whose brother Sam also has played in the NFL. “Bridging the racial divide in our society is what appears to be a calling, as well, for me. I think that both are incredibly important. The world needs sports because the world needs entertainment. The world, at times, needs to forget about its pain, its sorrow, its anguish, its struggles.

“At the same time, we need more than just a Band-Aid. We need a long lasting solution. So the series came about because I realized there is a great divide between my black brethren and my white brethren.

“By growing up in white culture in an all-white private school [Dallas’ St. Mark’s] predominantly, playing in the NFL and being fully fluent in black culture, I realized I can bridge the gap between my white and my black brothers, and I guess after 37 million views across three episodes it has been very well received.”

ESPN wanted Acho to stay, but didn’t have a prime spot for him. There were some discussions about pairing him with Will Cain on ESPN Radio’s forthcoming new weekday lineup, but that never really went anywhere.

Acho originally was going to be on FS1’s morning program, “First Things First.”

Charlie Dixon, FS1’s executive vice president, spotted Acho’s ability before his recent star turn. After a meeting and follow-up phone call with him, Dixon was sold.

“This person understands television at a level I hope to at some point,” Dixon said.

When Whitlock left, Dixon slid Acho into “Speak for Yourself.”

On June 10, it was officially announced that Acho would join the show, which was exactly four years to the day since he tried out for a then just-starting “Speak For Yourself.”

Acho said he has no interest in getting into politics, but he thinks he is going to bring “Speak For Yourself” to a new level.

“I honestly think it is going to be amazing,” Acho said. “The world will see.”

The pandemic has left millions hungry. This group helps people get...

Cerne Abbas giant is NOT prehistoric and may have been cut...

The pandemic has left millions hungry. This group helps people get...