Plastic-based food wrappers have ousted cigarette butts as the dominant form of litter polluting our beaches and waterways, experts have revealed.

Each September, the US-Based environmental group Ocean Conservancy holds the International Coastal Cleanup — a single day of litter picking across the globe.

These included sweet wrappers, crisp packets, drink pouches and similar — all of which are typically composed of layers of non-recyclable, low-density plastics.

This is the first time that wrappers have been the largest type of litter found during the International Coastal Cleanup, which has been running since 1986.

In last year’s cleanup, participants collected a total of 32.5 million pieces of rubbish — weighing in at 20.8 million pounds — including 4.2 million cigarette butts.

Experts have estimated that 11 million tons of plastic waste ends up in the ocean each year — impacting more than 800 species of marine wildlife. 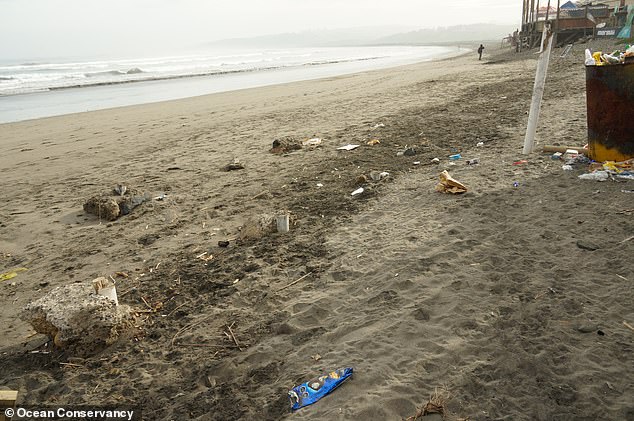 Plastic-based food wrappers have ousted cigarette butts as the dominant form of litter polluting our beaches (pictured) and waterways, experts have revealed

‘In the early days of the International Coastal Cleanup, volunteers were finding glass bottles, metal cans, paper bags, and other items that have increasingly been replaced by plastic alternatives,’ said Ocean Conservancy director Allison Schutes.

‘As a result, more and more food-related plastics are ending up in our environment, where they persist and threaten wildlife indefinitely.’

In fact, a study in 2017 calculated that 45 per cent of the plastic produced in Europe, the US, China and India from 2002–2014 went into the manufacture of food wrappers — the next-largest use being for construction, accounting for 19 per cent.

Despite this, in this the US, the recycling rate for plastic containers and packing has sat at around only 13 per cent, the Environmental Protection Agency reported the same year — the lowest rate among all materials used for such purposes.

‘We can recycle plastic bottles, we can bring our own bags to the supermarket and many of us can even skip the plastic straw altogether,’ said Ocean Conservancy senior director Nick Mallos, who runs their ‘Trash Free Seas’ program.

‘When it comes to keeping food fresh, safe, and accessible, manufacturers have put most of their research and development energy into disposable plastics,’ he added.

‘We need food science and packaging experts to accelerate research and development of packaging that isn’t destined for landfills, and that keeps both people and our ocean safe and healthy.’

During the International Coastal Cleanup, volunteers log each item of trash that they collect via wither paper data cards or Ocean Conservancy’s Clean Swell mobile app.

In the last 34 years, the cleanup efforts have collected more than 344.6 million pounds of trash from beaches and waterways across the globe.

This data is used by researchers, industry leaders and officials to inform policy decisions and to seek out new solutions to the world’s ocean plastic pollution crisis. 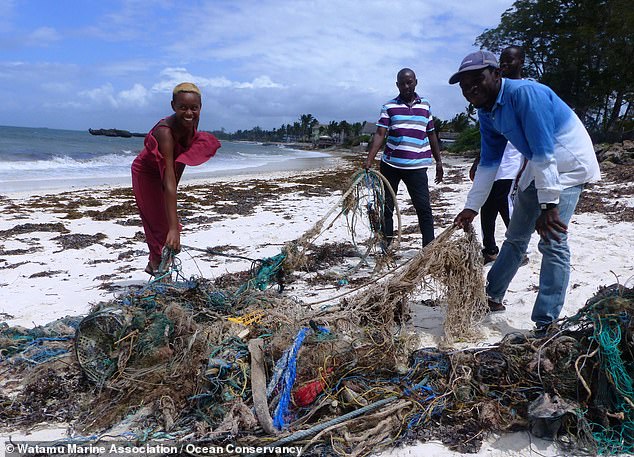 Each September, the US-Based environmental group Ocean Conservancy holds the International Coastal Cleanup — a single day of litter picking across the globe. Pictured, volunteers in Kenya clear litter from a polluted beach 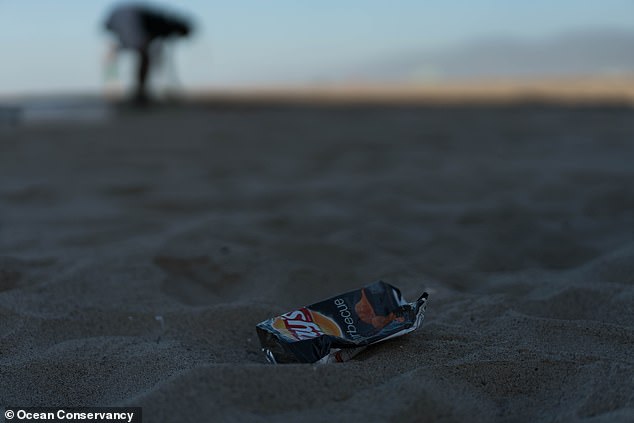 This is the first time that food wrappers, like the crisp packet pictured, have been the largest type of litter found during the International Coastal Cleanup, which is run annually since 1986

The results of the 2019 International Coastal Cleanup were released to coincide with the programme’s 35th year.

Ordinarily, the annual clean-up day is held on the third Sunday in September — however, this year, the coronavirus pandemic will see the  project run differently.

‘The International Coastal Cleanup is about community and collective action, and we – and the ocean – need that now more than ever,’ Ms Schutes added.

‘That’s why we are recommending that volunteers work “together, apart”, through individual or small-group cleanups — as well as at-home initiatives that help keep trash and plastics out of our ocean.’

More information on the International Coastal Cleanup can be found on the Ocean Conservancy website. 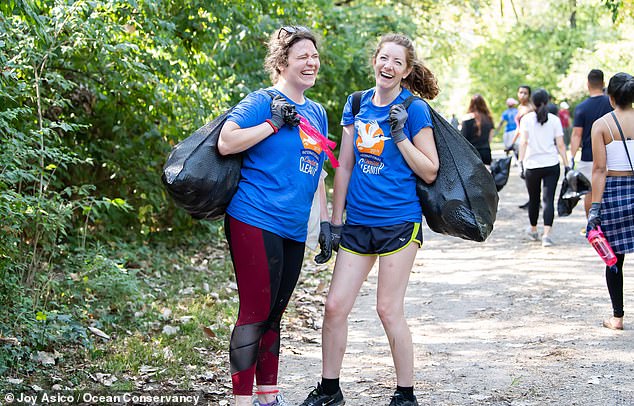 Of 30 billion plastic bottles used by UK households each year, only 57 per cent are currently recycled.

With half of these going to landfill, half of all plastic bottles that are recycled go to waste.

This is largely due to plastic wrapping around bottles that are non-recyclable.

Bottles are a major contributor to the increasing amount of plastic waste in the world’s oceans.

Researchers warned eight million tonnes of plastics currently find their way into the ocean every year – the equivalent of one truckload every minute.

The amount of plastic rubbish in the world’s oceans will outweigh fish by 2050 unless the world takes drastic action to further recycle, a report released in 2016 revealed.

At current rates, this will worsen to four truckloads per minute in 2050 and outstrip native life to become the largest mass inhabiting the oceans.

An overwhelming 95 per cent of plastic packaging – worth £65 – £92billion – is lost to the economy after a single use, the Ellen MacArthur Foundation report stated.

And available research estimates that there are more than 150 million tonnes of plastics in the ocean today.

Plastic pollution is ruining the ecosystems of the world, both marine and terrestrial. It litters shorelines, snags animals and suffocates entire populations of animals

So much plastic is dumped into the sea each year that it would fill five carrier bags for every foot of coastline on the planet, scientists have warned.

More than half of the plastic waste that flows into the oceans comes from just five countries: China, Indonesia, Philippines, Vietnam and Sri Lanka.

The only industrialized western country on the list of top 20 plastic polluters is the United States at No. 20.

The US and Europe are not mismanaging their collected waste, so the plastic trash coming from those countries is due to litter, researchers said.

While China is responsible for 2.4 million tons of plastic that makes its way into the ocean, nearly 28 percent of the world total, the United States contributes just 77,000 tons, which is less than one percent, according to the study published in the journal Science.