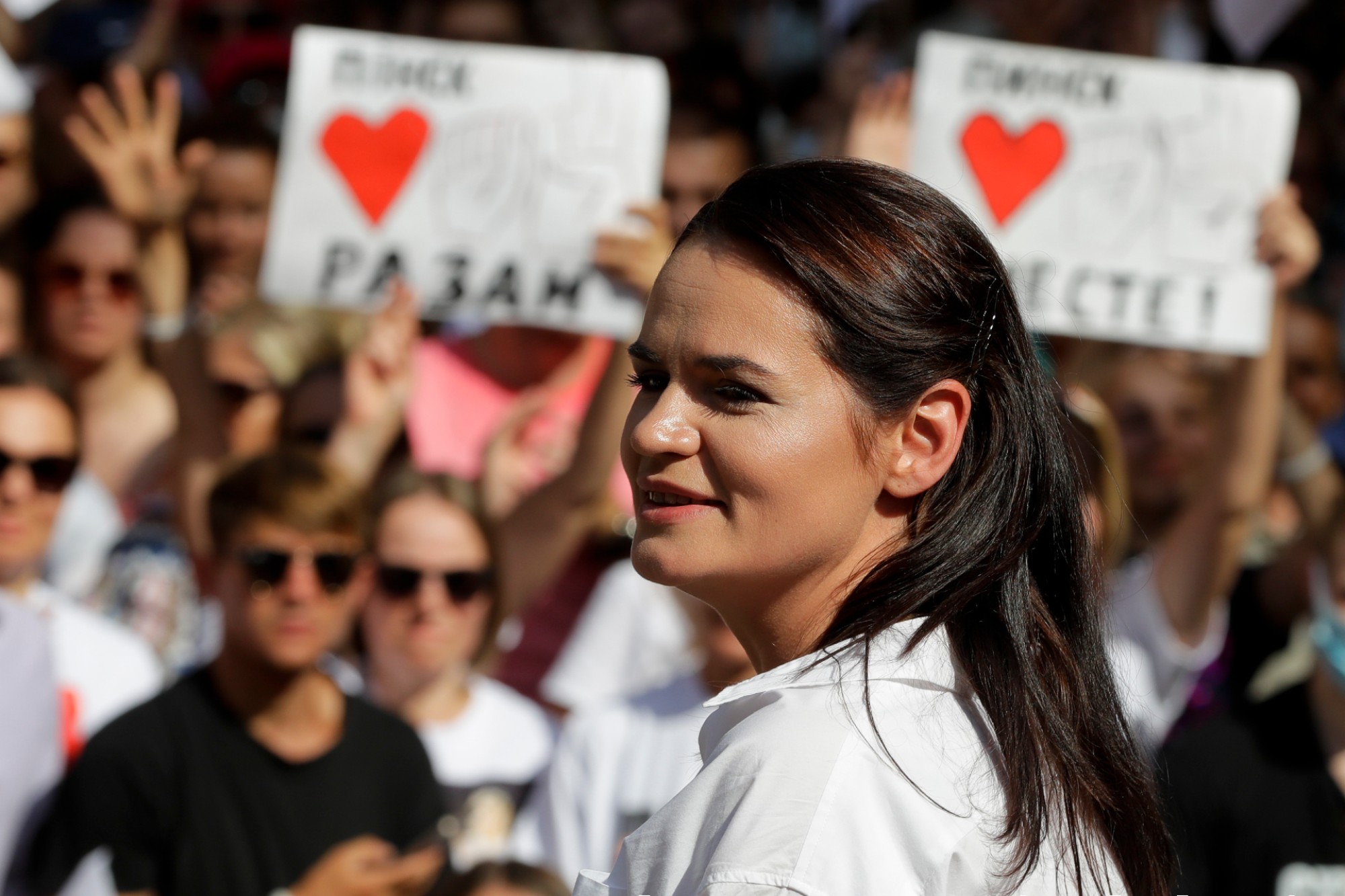 BRUSSELS — The European Union on Thursday awarded its top human rights prize to the Belarus opposition movement and its leader, Sviatlana Tsikhanouskaya, for their challenge to President Alexander Lukashenko’s long, hard-line reign.

During a speech at the European Parliament, president David Sassoli praised the Sakharov Prize laureates for their “courage, resilience and determination.”

“They have stood and still stay strong in the face of a much stronger adversary. But they have on their side something that brute force can never defeat and this is the truth,” Sassoli said.

The 27-nation bloc agreed this month to impose sanctions against officials suspected of election misconduct and a brutal security crackdown on protesters in Belarus. The EU has warned it is ready to sanction Lukashenko himself if he fails to enter into talks with the opposition and order an end to the repression launched after a disputed election.

In a series of recommendations adopted this week, EU lawmakers said sanctions need to include Lukashenko and called for new elections to be held under international supervision. MEPs also stated that “Tsikhanouskaya’s Coordination Council is the legitimate representative of the people.”

Lukashenko won his sixth term in office in a presidential election widely seen as rigged. Since the Aug. 9 polls that handed Lukashenko 80 percent of the vote, mass protests have rocked the ex-Soviet nation sandwiched between Poland and Russia.

Tsikhanouskaya, Lukashenko’s main challenger, got 10 percent of the vote. She and her supporters refused to recognize the results, saying the outcome of the vote was manipulated.

A 38-year old former English teacher with no previous political experience, Tsikhanouskaya joined the race after her husband who aspired to run for president was jailed. He has remained in prison.

Tsikhanouskaya has rejected the official tally and refused to concede defeat, but was forced to move to Lithuania under pressure from authorities.

Tsikhanouskaya shares the prize with several leading members of the opposition’s Coordination Council, which was created after the election in a bid to facilitate talks on a transition of power. They include Nobel Laureate Svetlana Alexievich, musician Maryia Kalesnikava and political activists Volha Kavalkova and Veranika Tsapkala and prominent opposition politician Mikola Statkevich, who was recently jailed.

Others on the shortlist for the award this year were activists defending the Guapinol river in Honduras and murdered environmental activist and indigenous leader Berta Caceres. Najeeb Michaeel, the archbishop of Mosul, also made the cut for his role in the evacuation of Christians, Syriacs and Chaldeans to Iraqi Kurdistan and safeguarding historic manuscripts after the Islamic State arrived in Mosul in 2014.

Sassoli paid tribute to Arnold Joaquín Morazán Erazo, a member of the environmental group opposing an iron oxide mine in Honduras who was killed this month.

“It is imperative that a credible, independent and immediate investigation is launched into this case and those responsible must be held to account,” Sassoli said.

The prize will be presented in a ceremony in Strasbourg, France, on Dec. 16.

Facebook
Twitter
Pinterest
WhatsApp
Previous articleWorking from home? Here's how you can get online when kids are using your bandwidth
Next articleArsenal offer trial to Mitchel Bergkamp – son of club legend Dennis

Beloved Brooklyn pizzeria Roberta’s — which has hosted celebrities including Beyoncé and the Clintons — was closed abruptly this week after workers contracted...
Read more
News

An-ex prostitute who was busted in a police sting is running to become the first trans woman on the City Council — representing...
Read more
News

The Croods: A New Age took the top spot at the Thanksgiving weekend box office after making its debut on Wednesday.The animated family...
Read more

The Croods 2 takes the top prize at the Thanksgiving weekend...