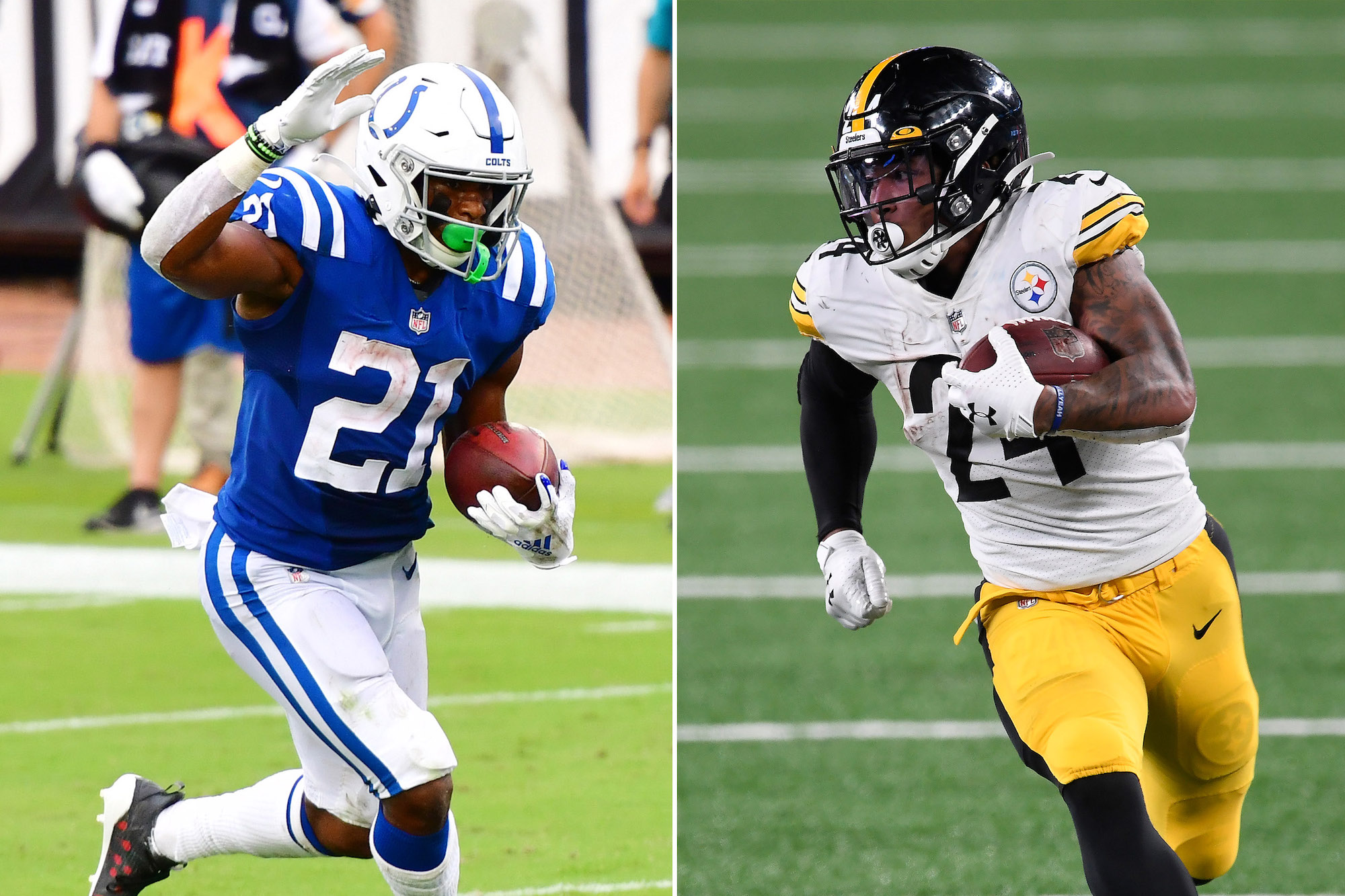 Week 2 of the NFL season is often dubbed “overreaction week,” and 2020 should be no exception. The absence of full training camps and preseason games meant there were surprising performances from Gardner Minshew, Nyheim Hines, Joshua Kelley, Benny Snell Jr., Laviska Shenault and more.

This, coupled with early injuries to key players, should make for a busy waiver-wire week. Below you will find players who are all rostered in fewer than 50% of leagues that should be worth targeting.

Players are ranked by percent rostered on Yahoo and all fantasy points are calculated in half PPR scoring.

Rivers was probably hoping for a better outcome in his debut as a Colt after 16 years with the Chargers. The 38-year-old signal-caller was picked off twice by a lackluster Jacksonville secondary, but completed 36 of 46 attempts for 363 yards and one touchdown. His performance on Sunday should serve as a reminder that players do not have to have the greatest NFL outings to get the job done for fantasy (looking at you, Jameis Winston). He should land somewhere on the borderline QB1 range in the right matchups, and is a decent streaming option for Week 2 against Minnesota’s secondary that was just torched by Aaron Rodgers and the Packers.

Will Minshew-mania descend on Jacksonville once again? The Jaguars certainly hope so after a stellar outing from the post-hype 2019 sixth-rounder who completed 19 of 20 pass attempts for three touchdowns in the team’s 27-20 win over the Colts. Minshew appears to have taken a step forward in his second year and is worth an add in deeper or two-quarterback/superflex leagues.

The Rams’ backfield is messy and Brown has a decent amount of competition with Darrell Henderson Jr. and rookie Cam Akers. That said, Brown did lead the Rams in both snaps and rushes on Sunday. He saw 18 attempts for 79 yards and two touchdowns. It’s too early to make any definitive statement about this backfield yet, but Brown appears to be the favored back in Sean McVay’s offense for now.

Hines will be a very popular waiver add this week —  especially in PPR leagues — after a fast start to the season. He had seven rushes for 28 yards and a touchdown and eight catches for 45 yards and a touchdown. Wisconsin rookie Jonathan Taylor should see more of the early-down work, but combined his solid Week 1 performance with a season-ending injury for Marlon Mack and Hines has a clear path towards fantasy relevance this season.

Snell was utilized a significant amount on Monday night against the Giants ahead of bell cow running back James Conner, who suffered an ankle injury during the second quarter. It’s unclear if Conner will miss time, but after exiting the game, Snell took on 19 of 20 carries and tallied a solid 113 yards. His performance on Monday combined with Conner’s injury history makes Snell a very attractive Week 2 add in any league size.

Justin Jackson truthers are very quiet after Jackson — whom many believed would take over the No. 2 role behind Austin Ekeler — had two touches for four yards on Sunday. Kelley shined in his rookie debut against the Bengals and saw 12 attempts for 60 yards and scored the team’s lone touchdown. He’s an extremely valuable handcuff for Ekeler and should have standalone value each week.

Raheem Mostert stole the show for the 49ers’ rushing attack in Sunday’s loss to Cardinals, but McKinnon also looked solid and — more importantly —  healthy. The oft-injured running back tallied three carries for 24 yards, and caught three of five targets for 20 yards and a touchdown. He should be used in change-of-pace/third-down situations in head coach Kyle Shanahan’s offense, which can support more than one fantasy-relevant back.

Gaskin was utilized a surprising amount in the Dolphins’ Week 1 loss to the Patriots. He led the team in rushing and tallied nine carries for 40 yards and was also involved in the passing game, catching all four targets for 26 yards. Gaskin’s involvement also surpassed both Matt Breida (5-22-0) and Jordan Howard (8-7-1). This will probably end up being some kind of running-back-by-committee situation, but Gaskin’s performance on Sunday should be enough to justify a bench spot in deeper leagues.

The former Jets wideout led the Panthers in receiving during Sunday’s shootout against the Raiders. Anderson hauled in six of eight passes for 115 yards, one touchdown and one two-point conversion. He should be a nice No. 2 option behind D.J. Moore for a Carolina team that is going to be hemorrhaging points every time the defense takes the field.

Shenault was a highly touted 2020 second-rounder from Colorado who many believe has first-round talent. He delivered on Sunday and posted three catches on four targets for 37 yards an a touchdown, trailing only Keelan Cole Sr. for targets. He also saw two rushes for 10 yards in the effort, and while his Week 1 workload wasn’t astounding, his involvement should increase as the season progresses. Pencil him in as a must-add for the first waiver run.

Davis led the Titans in receiving on Monday and caught seven of eight targets for 101 yards. His performance is concerning for anyone who drafted 2019 breakout star A.J. Brown, who tallied five catches on eight targets for 39 yards. It’s unclear who will emerge as the top option for Ryan Tannehill at this point, but Davis is worth at least a bench stash for now.

Gage was one of three Falcons receivers to tally 100 yards in the team’s 38-25 loss to the Seahawks. He tied Calvin Ridley and Julio Jones with 12 targets on the day and had nine catches for 113 yards. It wouldn’t be surprising to see the Falcons in a lot of negative game scripts this season. He’s definitely worth a look on waivers, especially in a Week 2 game against Dallas that could be a shootout.

Quarterback Patrick Mahomes spread the ball around in the 2020 season opener against the Texans. Sammy “Week 1” Watkins led the team with nine targets, and caught seven passes for 82 yard and a touchdown, but if you’re going to add a pass catcher not named Tyreek Hill or Travis Kelce from this team, it should be Robinson or Mecole Hardman (already 53% rostered). The Chiefs’ receiving corps is fairly volatile outside of Hill and Kelce, but any player catching passes from Mahomes will offer managers high upside. For now, Robinson and Hardman are boom-or-bust flex options in deeper leagues.

Howard saw six targets (tied Scotty Miller) during Sunday’s loss to the Saints trailing only Chris Godwin, who had seven. The 2017 first-rounder caught four passes for 36 yards and reeled Tom Brady’s first passing touchdown as a Buccaneer to start the second half. Perhaps more noteworthy is the fact that his involvement in the passing game eclipsed that of Rob Gronkowski, though Gronkowski outsnapped Howard 54 to 41. He has TE1 upside in the right matchup, which could come as soon as Week 2 against Carolina’s atrocious pass defense, especially if Mike Evans remains limited with his lingering hamstring injury.

Thomas’ unorthodox transition from quarterback to tight end was the talk of Washington’s training camp and now we see why. The 29-year-old saw a team-high eight targets in Sunday’s stunning victory over their NFC East-rival Eagles. He caught four passes for 37 yards and reeled in quarterback Dwayne Haskins’ lone touchdown of the day. Aside from Terry McLaurin, there aren’t a lot of options you can trust on this Washington Football Team, but Thomas should be worth a look in deeper leagues, especially in this week’s plush matchup against the Cardinals, who are notoriously weak against tight ends.

Washington is an intriguing Week 2 streaming option on the heels of a dominant performance against the Eagles. The unit — which looked much improved with the addition of Ohio State edge rusher Chase Young — allowed just 17 points, sacked Carson Wentz a whopping eight times and forced three turnovers.

Both sides of this matchup are worth considering if you are streaming defenses. Despite Washington’s Week 1 victory over the Eagles, its offense still leaves a lot to the imagination. The Cardinals D/ST also held the reigning NFC Champion 49ers to 20 points in Week 1 and sacked Jimmy Garoppolo three times.

Fossils: Pterosaurs did NOT have feathers and were most likely BALD,...

Trump claims, without offering proof, he has 'very little debt' after...

Nearly every car on the road 'will have to be electric...

Fossils: Pterosaurs did NOT have feathers and were most likely BALD,...