Light coming out of a black hole has been spotted for the first time and it was sparked by the collision of two galactic behemoths, according to a new study.

The high energy flash of light was detected in the far reaches of space – about 1.8 billion light-years away from Earth – by the LIGO gravitational wave detector.

The discovery turns astrophysics on its head, researchers claim, adding that it was assumed the gravity of a black hole was so great that nothing could escape.

An international team, including British and American astronomers, witnessed massive ‘flares’ created by the colossal cosmic crash of two black holes in orbit around a supermassive giant at the centre of a distant galaxy.

Dr Nicholas Ross, of the University of Edinburgh’s Institute for Astronomy, said the optical flash was a result of the two black holes crushing the gas around them. 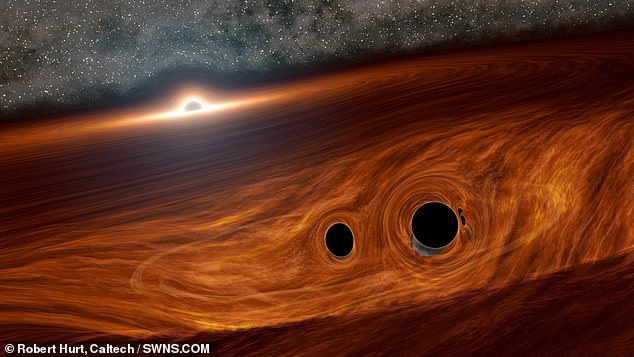 An international team, including British and American astronomers, witnessed massive ‘flares’ created by the colossal cosmic crash of two black holes in orbit around a supermassive giant at the centre of a distant galaxy

‘As a wee kid, I was hooked by the idea of black holes and now, as a big kid, the fact that we have ‘seen’ as well as ‘heard’ these black hole mergers, is an amazing discovery that has deep implications for astrophysics,’ he said.

Previous observations have shown that when two black holes spiral around each other and ultimately merge they generate ripples, or ‘gravitational waves’.

The phenomena, a direct consequence of Einstein’s theory of gravity, was only realised in 2015 and won three US scientists the Nobel Prize in Physics.

Lead author Professor Matthew Graham said the larger of the two – a supermassive black hole – was burbling along for years before this more abrupt flare.

‘The flare occurred on the right timescale, and in the right location, to be coincident with the gravitational-wave event’ previously detected by detectors on Earth.

The wave linked to the flare was picked up by gravitational wave detectors LIGO in Louisiana and its European counterpart VIRGO in Cascina, Italy.

‘In our study, we conclude that the flare is likely the result of a black hole merger, but we cannot completely rule out other possibilities,’ said Graham.

Supermassive black holes lurk at the centre of most galaxies, including Sagittarius A* at the heart of our own Milky Way galaxy.

These giants can be surrounded by a disc of flowing gas which contains swarms of stars and smaller black holes known as the accretion disc.

The flow of the gas helps to bring the smaller black holes together, enabling them to merge, and creates a larger black hole within the disk.

Upon creation, the new black hole has a large velocity and it is given what scientists described as ‘a kick’ through the gas disk and on to the larger chasm in space.

Experts said it is the reaction of the gas to the new speeding black hole that creates a bright light flare, visible with telescopes on the Earth.

Co author Saavik Ford, of the City University of New York, said these giants are surrounded not just by stars but dead stars including black holes.

‘These objects swarm like angry bees around the monstrous queen bee at the centre, the professor added.

‘They can briefly find gravitational partners and pair up but usually lose their partners quickly to the mad dance. 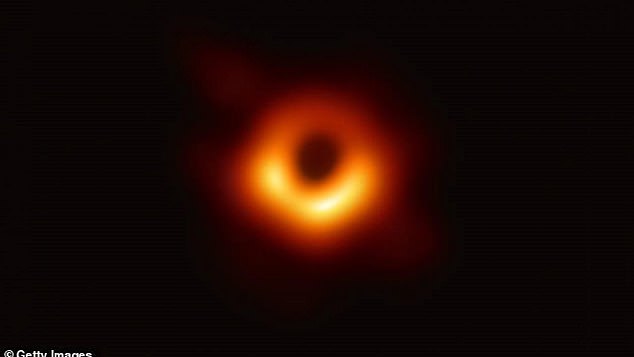 The wave linked to the flare was picked up by gravitational wave detectors LIGO in Louisiana and its European counterpart VIRGO in Cascina, Italy

‘But in a supermassive black hole’s disk, the flowing gas converts the mosh pit of the swarm to a classical minuet, organizing the black holes so they can pair up.’

Such a flare is predicted to begin days to weeks after the initial splash of gravitational waves produced during the merger.

Black holes are so dense and their gravitational pull is so strong that no form of radiation can escape them.

Until this study it was assumed that included light.

They act as intense sources of gravity which hoover up dust and gas around them. Their intense gravitational pull is thought to be what stars in galaxies orbit around.

How they are formed is still poorly understood. Astronomers believe they may form when a large cloud of gas up to 100,000 times bigger than the sun, collapses into a black hole.

Many of these black hole seeds then merge to form much larger supermassive black holes, which are found at the centre of every known massive galaxy.

Alternatively, a supermassive black hole seed could come from a giant star, about 100 times the sun’s mass, that ultimately forms into a black hole after it runs out of fuel and collapses.

When these giant stars die, they also go ‘supernova’, a huge explosion that expels the matter from the outer layers of the star into deep space.

In this case, Caltech’s Zwicky Transient Facility (ZTF) – designed to detect unusual astronomical emissions – did not catch the event right away.

When the scientists went back and looked through archival ZTF images months later, they found a signal that started days after the May 2019 gravitational-wave event.

ZTF observed the flare slowly fade over the period of a month.

‘This supermassive black hole was burbling along for years before this more abrupt flare,’ said the study’s lead author Graham, a research professor of astronomy at Caltech and the project scientist for ZTF.

‘The flare occurred on the right timescale, and in the right location, to be coincident with the gravitational-wave event.’

The team says it is not likely that the flare came from the usual rumblings of the supermassive black hole, which regularly feeds off its surrounding disc.

Using the Catalina Real-Time Transient Survey, led by Caltech, they were able to assess the behaviour of the black hole over the past 15 years, and found that its activity was relatively normal until May of 2019, when it suddenly intensified.

“Supermassive black holes like this one have flares all the time. They are not quiet objects, but the timing, size, and location of this flare was spectacular,” said co-author Mansi Kasliwal.

“The reason looking for flares like this is so important is that it helps enormously with astrophysics and cosmology questions.

‘If we can do this again and detect light from the mergers of other black holes, then we can nail down the homes of these black holes and learn more about their origins.’

The newly formed larger black hole, described in Physical Review Letters, should cause another burst of light in the next few years.

The process of merging gave the object a kick that should cause it to enter the supermassive black hole’s disk again.

Ligo is made up of two observatories that detect gravitational waves by splitting a laser beam and sending it down several mile (kilometre) long tunnels before merging the light waves together again.

A passing gravitational wave changes the shape of space by a tiny amount, and the Ligo was built with the ability to measure a change in distance just one-ten-thousandth the width of a proton.

However, this sensitivity means any amount of noise, even people running at the site, or raindrops, can be detected.

The Ligo detectors are interferometers that shine a laser through a vacuum down two arms in the shape of an L that are each 2.5 miles (four kilometres) in length.

The light from the laser bounces back and forth between mirrors on each end of the L, and scientists measure the length of both arms using the light.

If there’s a disturbance in space-time, such as a gravitational wave, the time the light takes to travel the distance will be slightly different in each arm making one arm look longer than the other. 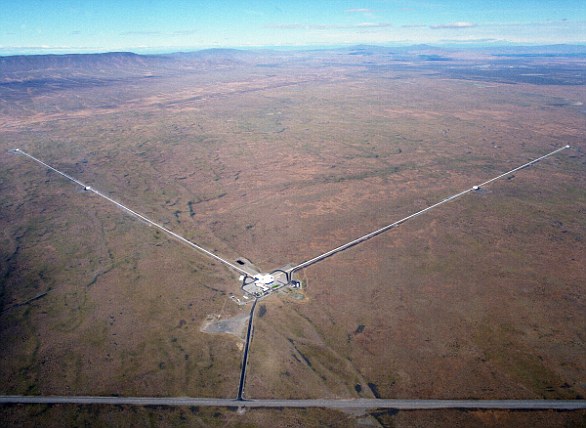 Ligo scientists measure the interference in the two beams of light when they come back to meet, which reveals information on the space-time disturbance.

The noise at each detector should be completely uncorrelated, meaning a noise like a storm nearby one detector doesn’t show up as noise in the other.

Some of the sources of ‘noise’ the team say they contend with include: ‘a constant ‘hiss’ from photons arriving like raindrops at our light detectors; rumbles from seismic noise like earthquakes and the oceans pounding on the Earth’s crust; strong winds shaking the buildings enough to affect our detectors.’

However, if a gravitational wave is found, it should create a similar signal in both instruments nearly simultaneously.

Miguel Andujar could still end up at third base for Yankees