Home U.S Florida man accidentally kills his twin brother by shooting him in the...
U.S

Florida man accidentally kills his twin brother, 23, by shooting him in the face while they were ‘joking around with guns’ in a parked car 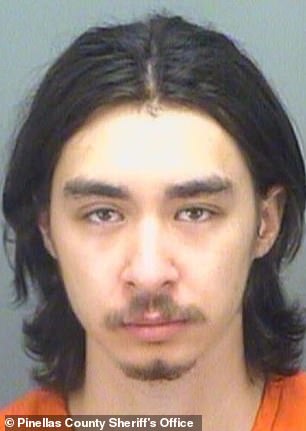 Thomas Parkinson-Freeman, 23, is charged with manslaughter after accidentally shooting his twin brother in the face

A man in Florida is charged with manslaughter after accidentally shooting his twin brother in the face while they were joking around with guns in a parked car outside their home.

Thomas Parkinson-Freeman, 23, was with his brother Mathias and a friend when the accidental shooting happened in Gulfport at about 7.08 pm Sunday.

They were talking and joking in the 1995 Nissan Pathfinder when Mathias took out a concealed handgun and pointed it at his brother.

Thomas responded by also pulling out a handgun, pointing it at his brother, and pulling the trigger.

Police were called to the 5600 block of 25th Avenue South following reports of gunshots from within the vehicle.

They found Mathias ‘mortally wounded’ by a gunshot to the face.

Cops say that Thomas formerly worked as a security officer and had been wearing the gun belt from his time there.

‘He had apparently been wearing the belt, with a personally-owned firearm, to show it off to the others,’ Gulfport Police Department said a statement.

The statement added that there was no indication of any conflict and that Thomas was not acting in self-defense when he killed his brother.

He told cops that he did not know why he pulled the trigger when he took out the gun but was acting on his training.

‘Detectives concluded that Thomas was not acting in self-defense when he drew and fired his gun because he told detectives that he was not in fear and that he did not believe Mathias had any intention of shooting him,’ the statement continued.

‘Thomas said that he reacted automatically based on training and that he does not know why he did so.’

A pipe with marijuana residue was found inside the car after a police search but it is not known if any of the occupants of the vehicle were under the influence at the time of the shooting.

The car had been parked here on the 5600 block of 25th Avenue South. The twin brothers were sitting in their car with a mutual friend at around 7pm Sunday when the accident took place

Thomas is being held in at the Pinellas County Jail on a charged of second degree manslaughter.

Neither brother had a previous criminal history but had been cited for minor traffic infractions.

According to Newsweek, there are 22 deaths a year by unintentional shooting in Florida on average.

This is only the 25th highest rate of unintentional gun deaths in the country.

In an average year, 2,660 people die by guns in Florida, according to Everytown for Gun Safety.