A new patent filed by Apple suggests the company is still toying with the idea of a a folding phone.

What makes this particular patent interesting beyond the fact that one of the biggest smart phone purveyors in the world may potentially enter into the folding phone market, is its unique form factor.

The patent outlines a device with a hinge that is slightly offset, meaning when folded, the phone would leave a sliver of space at the bottom of the display that would be uncovered by its top portion. 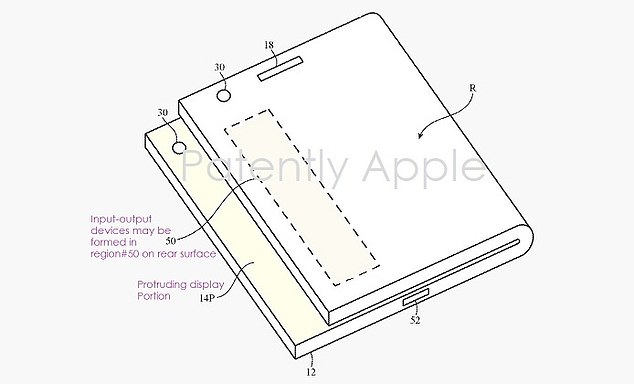 Apples new patent for a folding phone suggests a device with an offset hinge that, when folded, would leave room for a sliver of display that can show notifications

This uncovered portion could be used to display notifications or potentially as a type of shortcut menu fro frequently used apps according to the patent.

Alternatively, the patent also suggest that the uncovered strip may be used as a Touch Bar similar to the one included in the MacBook Pro.

Apple  previously filed a patent in the US for a foldable smartphone, built with a proprietary hinge mechanism that applies different levels of pressure to different parts of the screen

Though the patent doesn’t mean the phone will ever make it to fruition, it’s one of multiple folding patents filed by Apple over the course of the past year and signifies the company’s interest in joining the trend.

It would tail competitors like Samsung which has already released two foldable devices with varying results.

Photographs of patients' EYES can reveal if they're likely to die of heart failure, study claims

A TV reporter learned she had cancer after a viewer sent...