A Jeep Wrangler plummeted off a dangerous Colorado cliff side, ejecting a 23-year-old woman who suffered spinal injuries.

The frightening incident was captured via dash camera by another driver navigating through Black Bear Pass, a Jeep trail near Telluride that is notorious for its difficult terrain and potential danger.

The San Miguel Country Sheriff’s Office revealed that the passenger, Suzie Rhodes, had ‘serious traumatic injuries’ after the incident on October 10.

Footage shows the witness’ car slowly edging through the pass, which has a peak of 12,840 feet and is riddled with switchbacks. 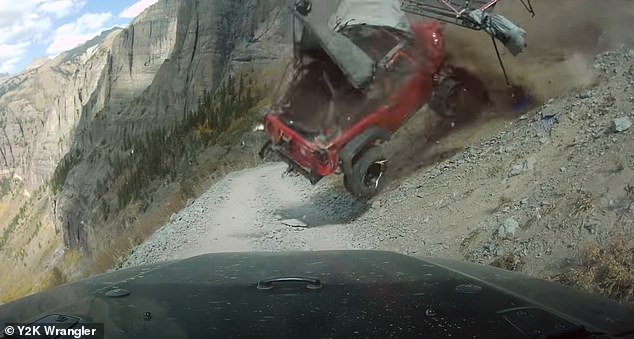 A red Jeep Wrangler rolled off a cliff side at Black Bear Pass near Telluride, Colorado, on October 10

Suddenly a red Jeep Wrangler – already crumpled and contorted by the crash – plunges down the cliff side and falls onto the dirt trail in front of the witness.

The vehicle’s roof hangs on by slim pieces of metal while personal belongings, like backpacks, are wildly swinging through the air. One of the Jeep’s tires is forced off as it continues to tumble down switchbacks.

Rhodes, as well as her two dogs, were passengers inside the vehicle at the time of the incident. All three of them were ejected from the vehicle just seconds before it flew past the dash camera.

According to the San Miguel Sheriff’s Office, the 22-year-old Jeep Wrangler driver said he had parked the vehicle before the incident.

‘The 22yr old male, who was the driver of the Jeep Wrangler Sport, told deputies he had shut off the engine, applied the emergency brake and stepped out of the vehicle to help direct a driver behind him around a tight turn,’ they wrote. 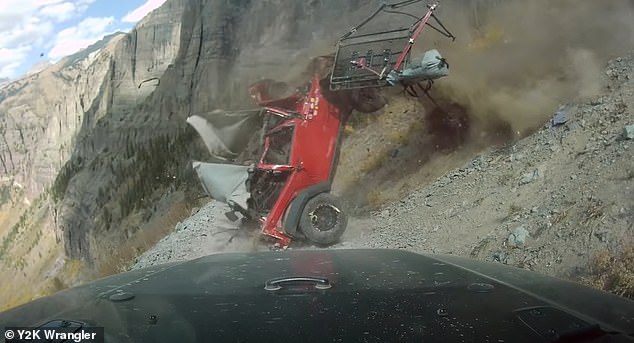 Dash camera footage showed that the Jeep was empty at that time, but a passenger and two dogs had been ejected just seconds before 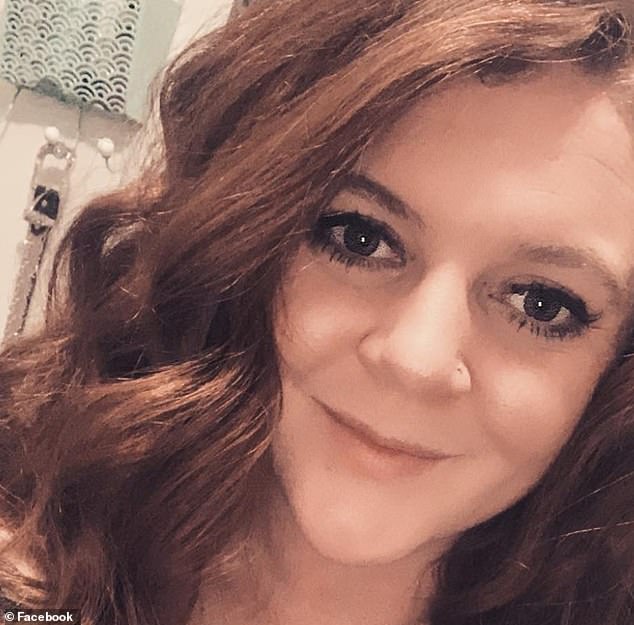 But the Jeep began to rolling down the cliff side while Rhodes was still seated.

‘He tried to jump back into the vehicle to try and steer it, but he was thrown into rocks when it left the road. The Jeep rolled down several switchbacks, ejecting the passenger before coming to a rest on the roadway,’ authorities wrote.

Emergency crews transported both victims to Telluride Medical Center. The man suffered minor injuries, but Rhodes’ wounds were more extensive. She was flown via Careflight to St. Mary’s Hospital in Grand Junction. 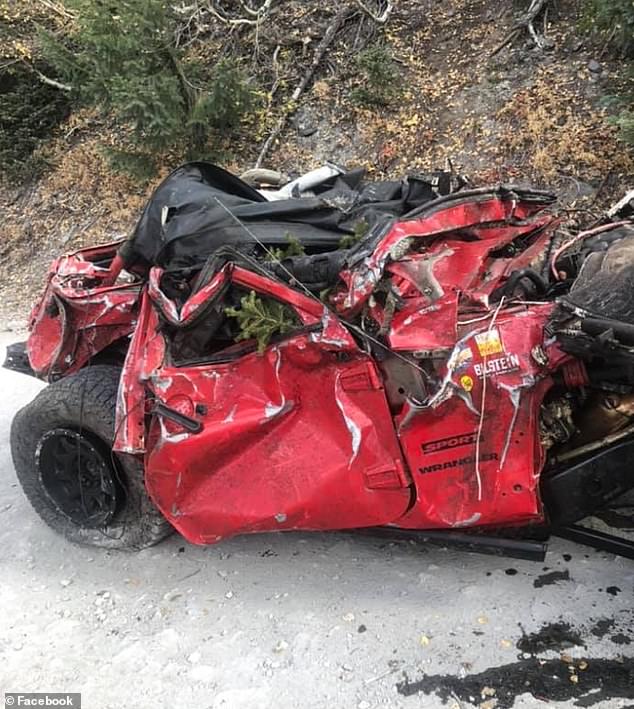 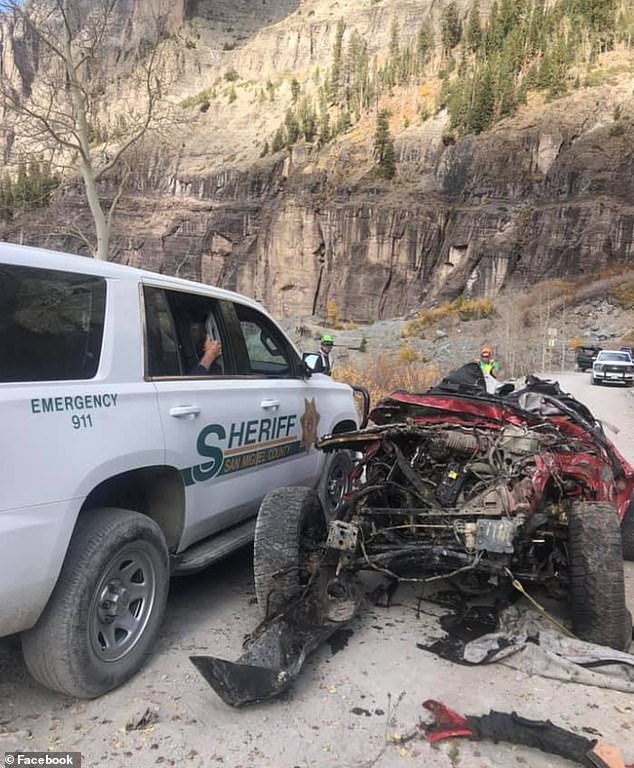 Pictured: Photos shared by the San Migueel Sheriff’s Office showed the extent of the Jeep’s damage after the incident 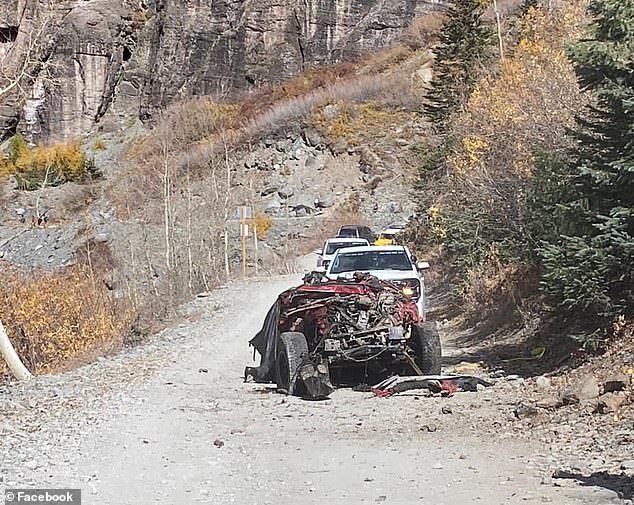 Meanwhile, authorities had located one of Rhodes’ dogs, but Decker, a 10-month-old black Labrador Retriever, was still lost somewhere in Black Bear Pass.

Loved ones launched a desperate search and, three days later, the pup was found alive.

‘Family and friends were up in the Black Bear area Tuesday morning looking for Decker and showing flyers to hikers all afternoon,’ authorities wrote.

‘A couple from Golden, CO told them they heard a dog howling, and using their spotting scope, they were able to locate the puppy.’

Authorities found Decker on ‘steep terrain in the Telluride Peak area, about 700 vertical feet up from where the Jeep rolled off the Black Bear switchbacks.’

‘Decker, who survived out in the mountains for three days, is very happy, enjoying jerky and lots of hugs,’ they wrote.

‘The father of the hospitalized patient, who is Decker’s fur-mommy, says this is the best medicine for his daughter, and expressed his and his family’s gratitude to everyone involved in this and Saturday’s mission.’ 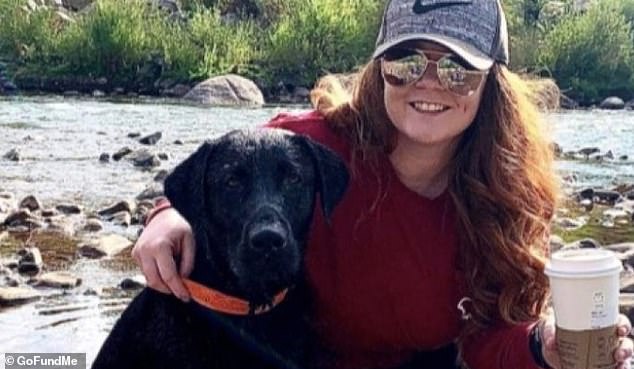 While Rhodes (right) was recovering in a Colorado hospital, loved ones and family were searching for her dog, Decker (left) 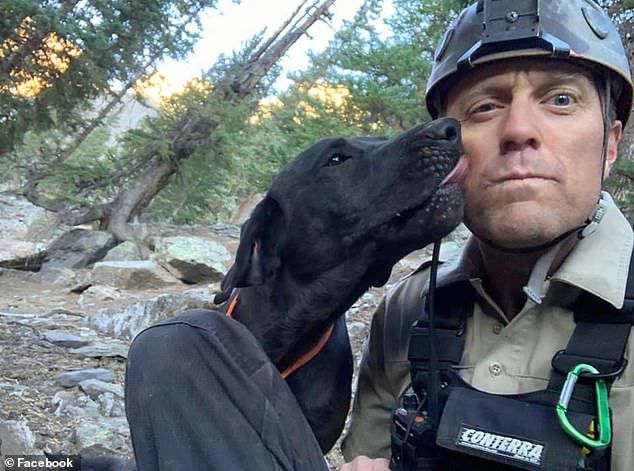 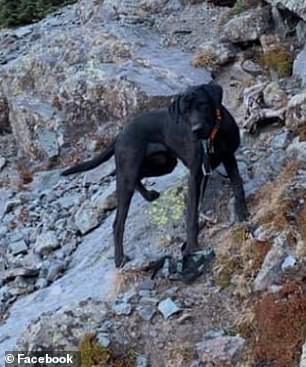 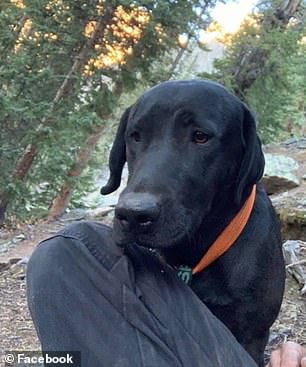 Last week, a GoFundMe was created for Rhodes to aid with recovery and medical expenses.

An accompanying message revealed that Rhodes underwent surgery on her spinal cord.

‘Her doctors have estimated at least 2 years of extensive rehabilitation meaning Suzie will be out of work for the next 2 years on this road to recovery,’ the message read.

‘Because of this, she won’t have any income to support her cost of living including: Rent, Utilities, Medication, Transportation, In-Home living assistance, Therapy, and Rehabilitation.’

The message added that Rhodes grew up in Bayfield, Colorado, and has deep ties to the community.

‘She has shared her love of volleyball by coaching at both the middle and high school levels, in addition to Club Volleyball,’ the message read.

‘She has an incredible love for the outdoors, including fishing, hunting, hiking, and jeeping, and has shared this with youth, friends, and family.’

As of Sunday, Rhodes had made some progress and was able to sit up in her wheelchair.

‘She is now able to sit up in her in her wheelchair, and was outside a couple days ago to see her beloved black lab puppy Decker,’ the message read.

Since its inception in 1924, the Macy's Thanksgiving Day Parade has become as much of an American holiday pastime as turkey dinner, pumpkin...
Read more
Load more