A South Carolina sheriff’s deputy had died following a physical altercation with a suspect on a freeway, authorities said.

Two others were also injured in the incident on Tuesday which occurred on the Interstate 25 at about 3pm local time.

Lewis described his colleague as a ‘man of integrity and passion’ who had ‘more certifications and instructed more classes than anyone could count.’ 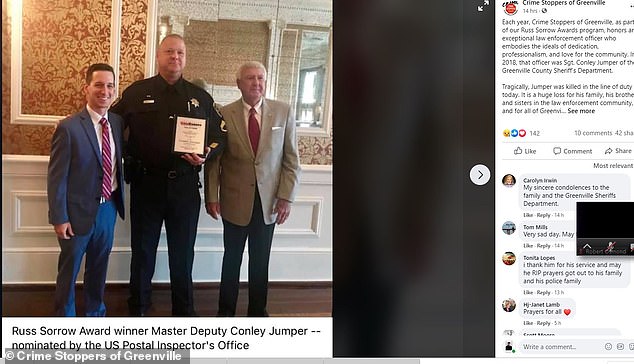 ‘He was larger than life, both literally and figuratively. At over 6 foot four, he was a gentle giant who always wore a contagious smile,’ Lewis added.

He also said during the press conference that Master Deputy Jumper would be made a sergeant posthumously.

At over 6 foot 4, Jumper was described as a ‘gentle giant’ and ‘larger than life’. He was posthumously made a sergeant

In 2018, he was presented with the prestigious Russ Sorrow Award by Crime Stoppers of Greenville.

The award – named for Greenville Police Department Officer Russ Sorrow who was killed in the line of duty – is given to officers for their ‘dedication, professionalism and love for the community.

At the press conference on Tuesday, Sheriff Lewis said Jumper ’embodied the true essence of a public servant.’

‘He always strived to be the best deputy he could be. He was a tireless worker and a loving friend and he had a heart of gold.’

Jumper is survived by his wife, daughter, parents and sister.

In the day since his death, $13,450 dollars has been raised by donations to support Jumper’s family.

The incident on Tuesday happened after Jumper initiated a traffic stop on the northbound lanes of Interstate 85.

At least one person in the vehicle got into a physical altercation with two of the deputies and a ‘struggle ensued’ officials said.

During the tussle, the vehicle accelerated and hit a tractor-trailer on the road.

It was unclear what made the vehicle move forward, Lewis said, adding that another deputy patrol vehicle responding to the situation collided with the suspect’s vehicle at about the same time.

Three deputies and two other people were taken to hospital, where Jumper was pronounced dead.

The others are expected to recover, Lewis said.

It is not known whether anyone was arrested and no information on the suspects has been provided.

An investigation into the incident is ongoing.

A quick-thinking Washington state father turned the tables on an intruder who used a shovel to break into a family's home over the...
Read more

Shane Richie net worth: I'm A Celebrity and EastEnders star has staggering fortune