A combination of different healthy lifestyle habits such as being physically active, not smoking and a high-quality diet can reduce the risk of developing Alzheimer’s.

Researchers from the Rush University Medical Center examined data on nearly 3,000 people from two longitudinal studies run by the National Institute for Aging.

They found that people in the dataset who adhered to four or five ‘healthy behaviour’ types had a 60 per cent lower chance of developing Alzheimer’s disease. 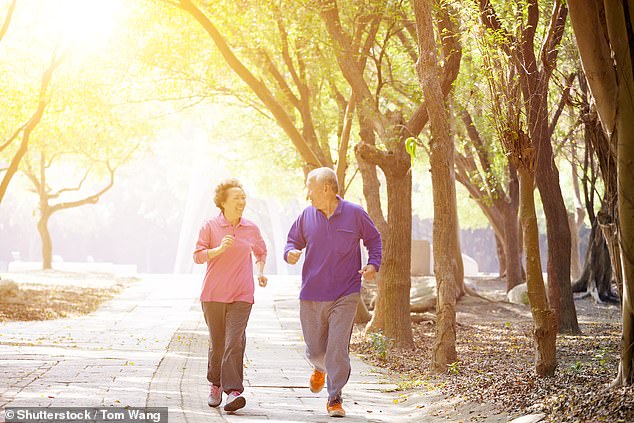 He said they ‘add to the basis for controlled clinical trials to directly test the ability of interventions to slow or prevent development of Alzheimer’s disease.’

They selected participants from those studies who had data available on their diet, lifestyle factors, genetics, and clinical assessments for Alzheimer’s disease.

The resulting data pool included 1,845 participants from CHAP and 920 from MAP.

The researchers scored each participant based on five healthy lifestyle factors, all of which have important health benefits.

This included undertaking at least 150 minutes per week of moderate-to-vigorous physical activity, not smoking and light-to-moderate alcohol consumption.

Other factors they were scored on included eating a high-quality Mediterranean diet and engagement in cognitive activities – such as chess – that keep the mind active.

The research team then compared the scores with outcomes of clinical diagnosis of Alzheimer’s in the CHAP and MAP participants.

‘This population-based study helps paint the picture of how multiple factors are likely playing parts in Alzheimer’s disease risk,’ said Dallas Anderson, Ph.D., program director in the Division of Neuroscience at NIA.

‘It’s not a clear cause and effect result, but a strong finding because of the dual data sets and combination of modifiable lifestyle factors that appear to lead to risk reduction.’

In 2017 an NIA studied found that evidence on lifestyle factors along with blood pressure management and brain training was ‘encouraging but inconclusive’ for preventing or delaying the onset of Alzheimer’s. 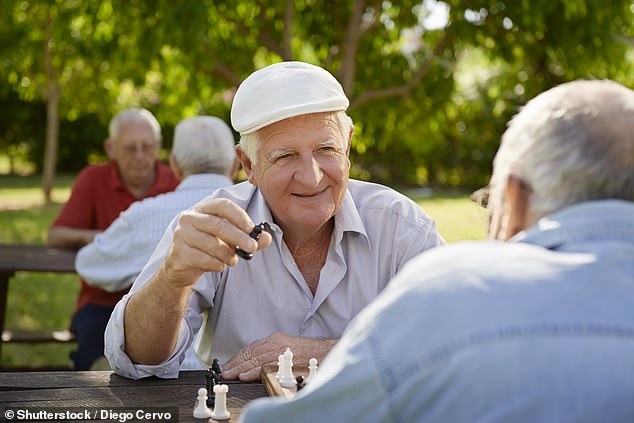 There are a number of new trials currently underway including a clinical trial comparing two parellell groups with two different diets.

Another study is evaluating whether lifestyle interventions, including new diets, could protect cognitive functions in older adults at increased risk of decline.

NIA says it is currently funding more than 230 active clinical trials on Alzheimer’s and related dementias to better understand the disease.

Of those, more than 100 are non-drug interventions, such as exercise, diet, cognitive training, sleep, or combination therapies.

This research was published in the June 17, 2020, online issue of Neurology, the medical journal of the American Academy of Neurology.

WHAT IS DEMENTIA? THE KILLER DISEASE THAT ROBS SUFFERERS OF THEIR MEMORIES

Dementia is an umbrella term used to describe a range of progressive neurological disorders (those affecting the brain) which impact memory, thinking and behaviour.

There are many different types of dementia, of which Alzheimer’s disease is the most common.

Some people may have a combination of types of dementia.

Regardless of which type is diagnosed, each person will experience their dementia in their own unique way.

Dementia is a global concern but it is most often seen in wealthier countries, where people are likely to live into very old age.

HOW MANY PEOPLE ARE AFFECTED?

The Alzheimer’s Society reports there are more than 850,000 people living with dementia in the UK today, of which more than 500,000 have Alzheimer’s.

It is estimated that the number of people living with dementia in the UK by 2025 will rise to over 1 million.

In the US, it’s estimated there are 5.5 million Alzheimer’s sufferers. A similar percentage rise is expected in the coming years.

As a person’s age increases, so does the risk of them developing dementia.

Rates of diagnosis are improving but many people with dementia are thought to still be undiagnosed.

IS THERE A CURE?

Currently there is no cure for dementia.

But new drugs can slow down its progression and the earlier it is spotted the more effective treatments are.