High doses of ketamine, a drug commonly used in humans as an anaesthetic, can temporarily switch off the brain, researchers claim.

In lab experiments, UK researchers observed the brain activity of sheep turning off in an instant, and then turning back on minutes later.

This phenomenon is likely to explain the dangerous ‘K-hole’ phenomenon – where ketamine abusers experience a state of oblivion likened to a near-death experience.

Measurements of brain waves of sheep that were sedated with the drug may explain the out-of-body experiences that high ketamine doses can cause.

The previously undiscovered effect of ketamine on brain activity could make it a useful tool in the treatment of neurological conditions, the team say. 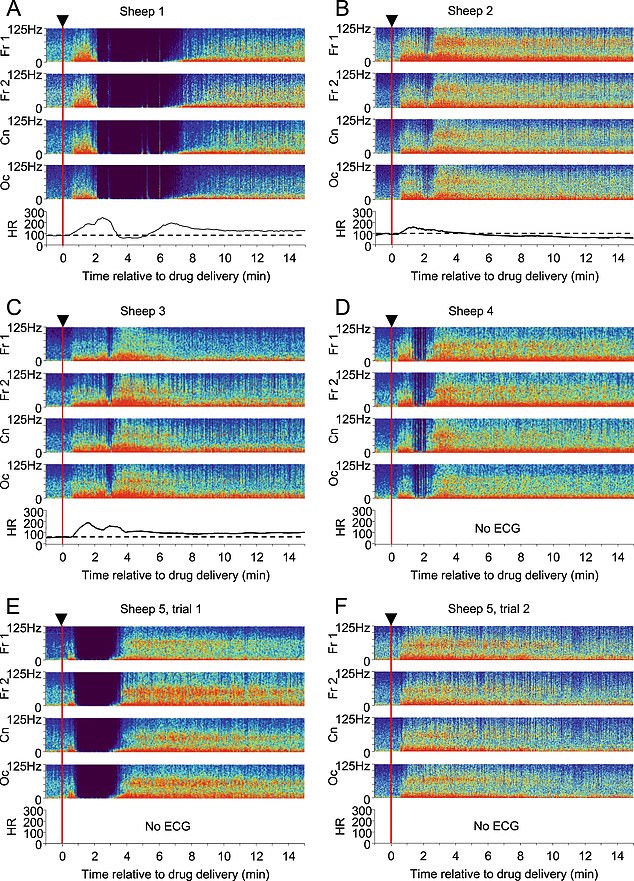 Researchers used electroencephalography (EEG), a method of recording electrical activity of the brain that involves electrodes placed along the scalp. EEG holes are visible in spectrograms after intravenous ketamine delivery. (A–F) Spectrograms of EEGs recorded from five sheep that received ketamine (red line in A-F). For three of these sheep (A–C) the heart rate (HR) was recorded. Sheep 5 (E) received a repeated dose of ketamine in a separate session 3 days after the first trial (F)

‘This wasn’t just reduced brain activity. After the high dose of ketamine the brains of these sheep completely stopped,’ said Professor Jenny Morton at the University of Cambridge’s Department of Physiology, Development and Neuroscience.

HUNTINGTON’S DISEASE: CAUSE AND TREATMENT

Huntington’s disease is a condition that stops parts of the brain working properly over time.

It’s an inherited disorder that results in the death of brain cells.

It gets gradually worse over time and is usually fatal after a period of up to 20 years.

Symptoms usually start at 30 to 50 years of age, but can begin much earlier or later.

If a parent has the Huntington’s disease gene, there’s a 50 per cent chance of each of their children developing the condition – affected children are also able to pass the gene to any children they have

There’s currently no cure for Huntington’s disease or any way to stop it getting worse.

But treatment and support can help reduce some of the problems it causes.

‘We’ve never seen that before.’

The team’s study aimed to understand the effect of therapeutic drugs on the brains of people living with Huntington’s disease, a rare and inherited brain disorder.

They wanted to understand why human patients respond differently to various drugs if they carry the gene for the progressive disease, which stops parts of the brain from working properly over time.

‘Our surprising findings could help explain how ketamine works – if it disrupts the networks between different regions of the brain, this could make it a useful tool to study how brain networks function – both in the healthy brain and in neurological diseases like Huntington’s disease and schizophrenia.’

At the University of Cambridge’s labs, sheep were used as a pre-clinical model of disorders of the human nervous system, including Huntington’s disease.

To conduct the experiment, normal sheep were put into veterinary slings, which are commonly used to keep animals safe during veterinary procedures.

Different doses of ketamine were given to 12 sheep – six of which were given a single higher dose of ketamine (24mg/kg) which is at the high-end of the anaesthetic range.

Researchers used electroencephalography (EEG), a method of recording electrical activity of the brain that involves electrodes placed along the scalp.

EEG measured immediate changes in the animals’ brain waves once ketamine had been administered.

Initially the same response was seen as with a lower dose, but within two minutes of administering the drug, the brain activity of five of these six sheep stopped completely – one of them for several minutes, which hasn’t been seen before.

Although the anaesthetised sheep looked as though they were asleep, their brains had switched off.

‘A few minutes later their brains were functioning normally again – it was as though they had just been switched off and on,’ Morton said.

As the sheep came round from the ketamine, their brain activity was really unusual, she said.

‘The timing of the unusual patterns of sheep brain activity corresponded to the time when human users report feeling their brain has disconnected from their body. 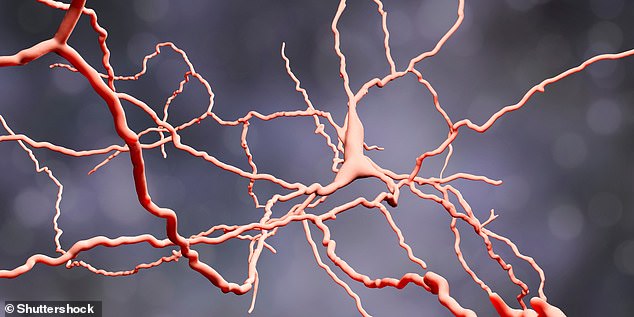 The findings arose as part of a larger research project into Huntington’s disease, an inherited disorder that results in the death of brain cells. The team want to understand why human patients respond differently to various drugs if they carry the gene for this disease

‘It’s likely that the brain oscillations caused by the drug may prevent information from the outside world being processed normally.’

Low frequency activity dominated while the sheep were asleep, but when they drug wore off and the sheep regained consciousness, their brain activity started switching between high and low frequency oscillations.

The bursts of different frequency were irregular at first, but became regular within a few minutes.

Interestingly, one of the sheep that received a repeated dose of ketamine in a follow-up trial three days after the first session showed no EEG hole, despite doing so in the first trial.

Ketamine was used for the study because it’s widely used as a safe anaesthetic and pain-relief drug for treating large animals including dogs, horses and sheep.

It is also used medically, and is known as a ‘dissociative anaesthetic’ because patients can appear awake and move around but they don’t feel pain or process information normally – many report feeling as though their mind has separated from their body.

At lower doses ketamine has a pain-relieving effect and its use in adult humans is mainly restricted to field situations such as frontline pain relief for injured soldiers or victims of road traffic accidents.

Ketamine has recently been proposed as a new treatment for depression and post-traumatic stress disorder, but beyond its anaesthetic qualities, little is known about its effects on brain function. 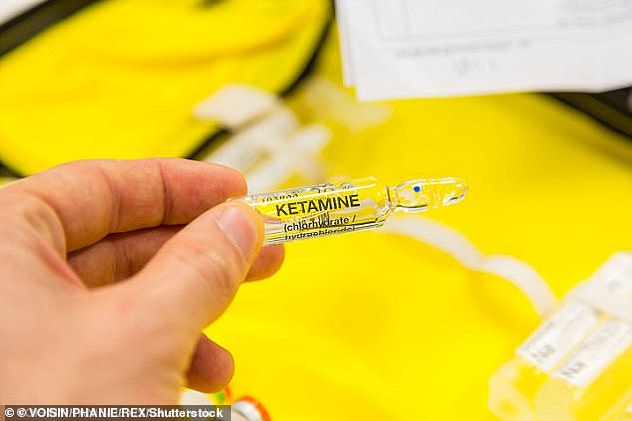 ‘We think of anaesthetic drugs as just slowing everything down,’ said Morton.

‘That’s what it looks like from the outside – the animals basically go to sleep and are unresponsive, and then they wake up very quickly.

‘But when we looked at the brain activity, it seems to be a much more dynamic process.’

Ketamine users are known to take doses many times higher than those given to the sheep in these trials, and it’s likely these higher doses are have to be taken to get the same effect.

But such high doses can cause liver damage, stop the heart from beating and could well be fatal, the research team warn.

The study has been published in Scientific Reports.

KETAMINE AND THE ‘K-HOLE’

Ketamine is a powerful general anaesthetic that is used to stop humans and animals experiencing pain during operations.

It started being used as a party drug in the late 2000s, with people taking it before raves for a more intense experience.

What are the side effects?

Ketamine causes a loss of feeling and paralysis of the muscles.

The dissociative state induced by ketamine almost certainly underlies its appeal as a recreational drug.

Psychic sensations associated with emergence from ketamine anaesthesia are frequently reported, and because of this, clinical use of ketamine is largely restricted to veterinary medicine and young or elderly human patients.

Subjective effects include perceptual distortions, sensations of floating, vivid dreams or illusions, distortion of sense of time and space, and alterations in mood state and body awareness

At a sufficiently high dose, both awareness of self and surroundings, and interactions with others become profoundly impaired – a state known as the ‘k-hole’.

This distortion of reality can lead people to believe they have spoken to God or a higher power, which can lead to addiction as they crave that experience.

Ketamine may also cause people to feel incapable of moving, experience hallucinations or lead to panic attacks, confusion and memory loss.

Regular users can seriously damage their bladders, which may need to be surgically removed.

Other risks include a raised heart rate and blood pressure.

Paralysis of the muscles can leave people vulnerable to hurting themselves, while not feeling pain properly can cause them to underestimate any damage.

Many claim ketamine withdrawal is worse than any other drug, with some feeling so depressed they contemplate suicide.

If you are having suicidal thoughts, contact the Samaritans here.

How is it taken and what is the law around it?

For medical use ketamine is liquid but the ‘street’ drug is normally a grainy, white powder, with one gram costing around £20.

As a class B drug in the UK, possession of ketamine can result in people facing up to five years in jail, while supplying it could mean up to 14 years in prison.

Both cases may result in people facing an unlimited fine.

Republican convention in Jacksonville to be downsized as coronavirus surges in...

European judges plunge Brexit talks into chaos – ruling could have...

Republican convention in Jacksonville to be downsized as coronavirus surges in...