An ancient Hindu temple that was submerged in a catastrophic flood 200 years ago has re-emerged for the first time, as lower water levels reveal its sunken spire.

The 500-year-old monument to an avatar of the god Vishnu once stood proudly on the banks of the Mahanadi river in Odisha, eastern India, and provided a place of worship for seven nearby villages.

But after torrential floods in the 1800s the river changed course, forcing villagers to abandon the temple and their homes as they disappeared beneath the swirling rapids.

Its location was lost for generations, with repeated searches by the Indian National Trust for Art and Cultural Heritage (INTACH) proving futile.

This week, however, the temple re-emerged from the river as the Mahanadi’s water level dropped low enough to reveal the spire once again. 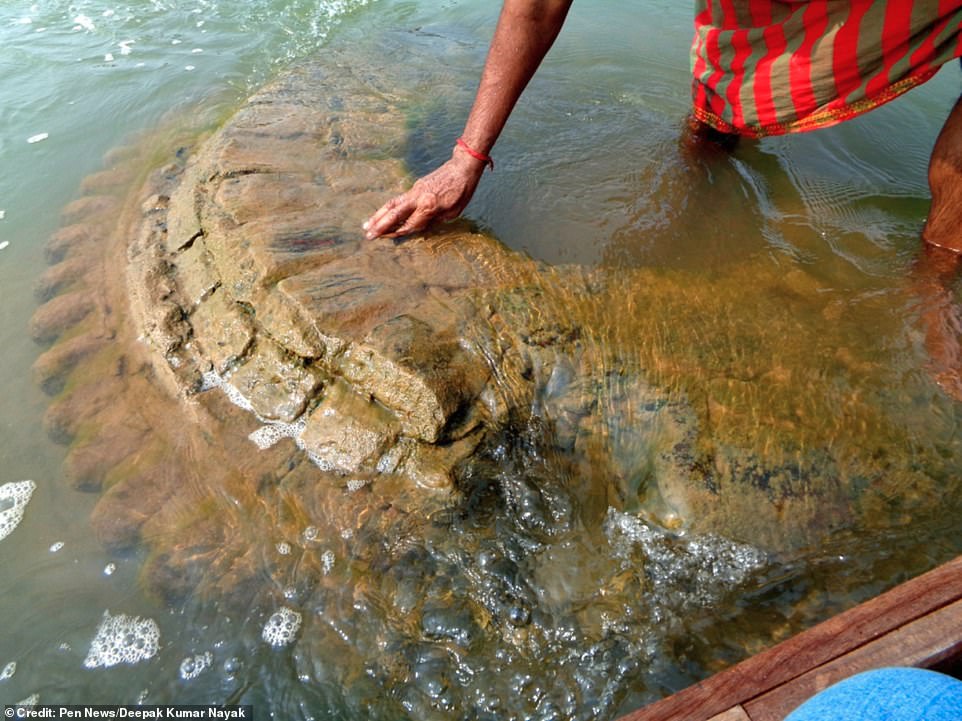 The spire of the temple complete with a notched stone disc, or amalaka, which crowns a Hindu temples main spire. It emerged from the waters of the Mahanadi river in Odisha, eastern India 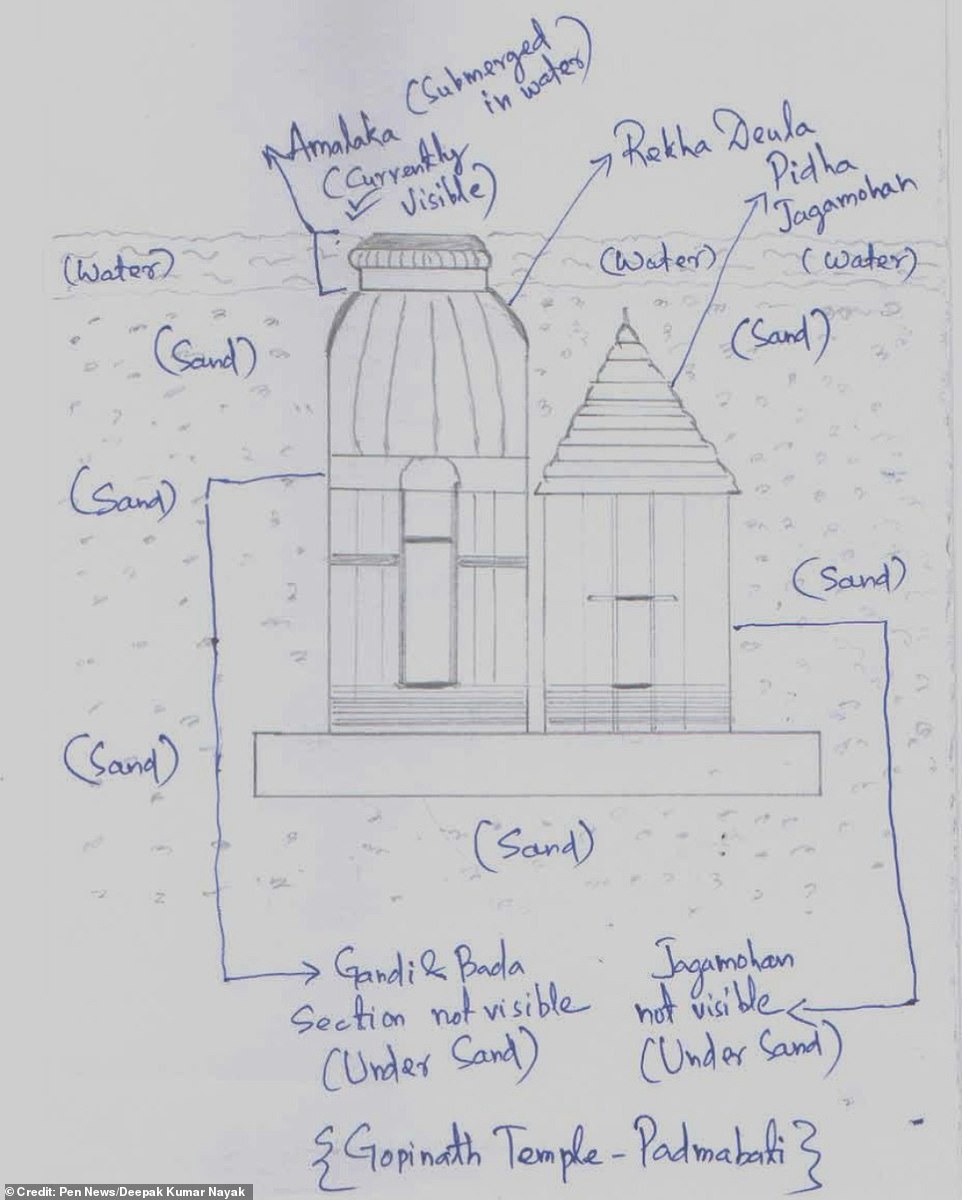 Above is an artists sketch of the temple. Most of the structure has been buried in the river sediment, leaving just the top of the main tower visible. Previous searches by archaeologists for this temple had proved futile

Project lead, Anil Dhir, said his team had successfully documented many temples of the Mahanadi river valley, but all efforts to locate this 60-foot one had proved ‘futile’.

‘The temple was in the midst of seven villages, collectively called Satapatana,’ he said.

‘Sometime from 1830 to 1850, after catastrophic flooding, the river started to change its course and engulf the villages.

‘The villages were abandoned and shifted, but the temple was left intact, with the idol being removed and kept in a makeshift place.

‘A new temple was built and the idol installed there sometime in 1855. That temple exists today.

‘But the original temple was engulfed in the river and ended up midstream in the subsequent years.’

He continued: ‘The existence of this temple was known and had been recorded. It used to surface every year in the summer months up to a height of five feet.

‘But then a barrage was constructed which raised the water level, and the temple has not surfaced in the last 20 years… only the old timers knew about it.

‘We were on the lookout for this temple during our survey of the area, but all our efforts were futile. However, last week we were informed by locals that the spire of the temple had surfaced.’ 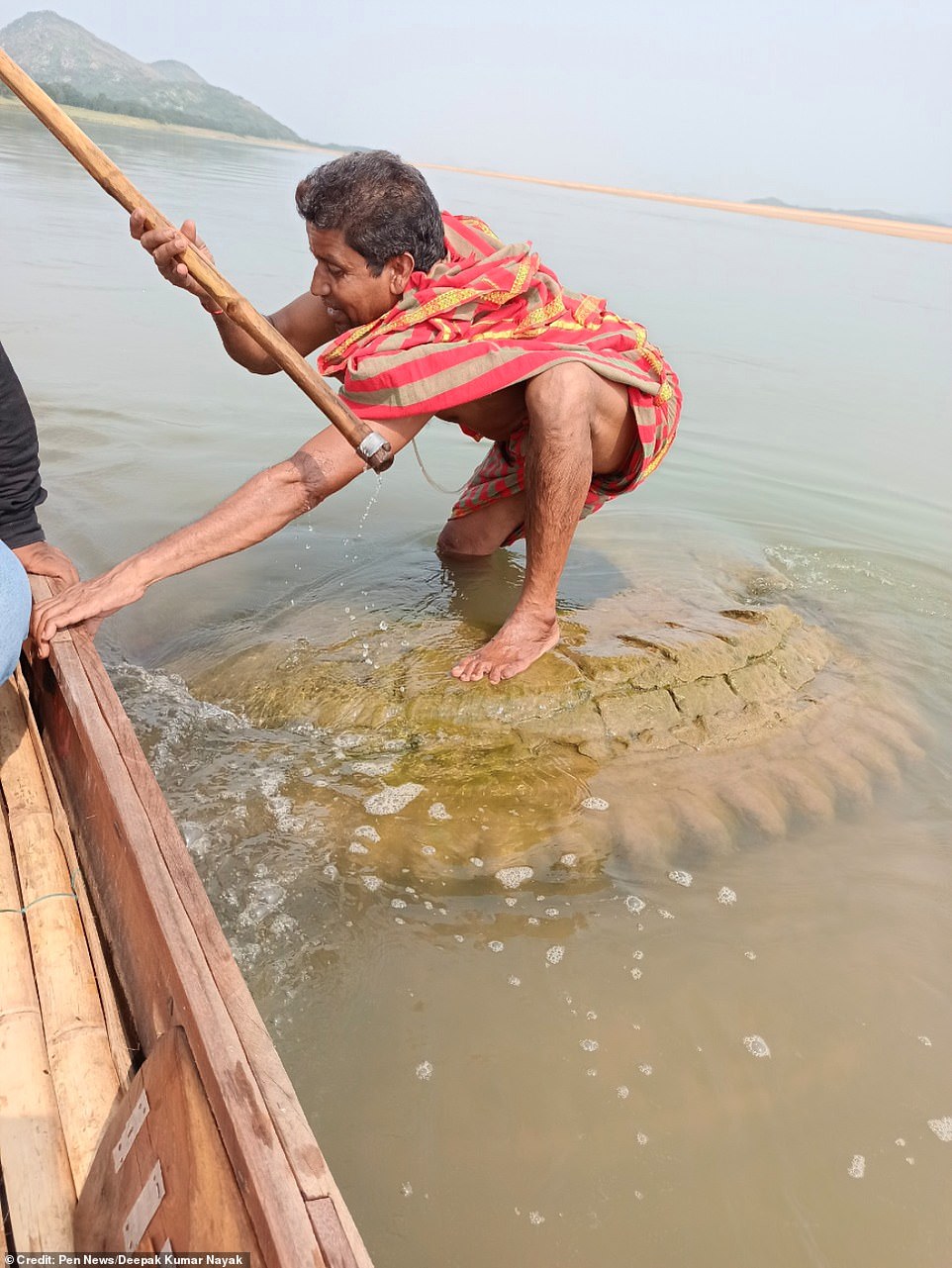 The temple was built by a local king to an avatar of the Hindu god Vishnu 500 years ago. When the river started to change course and engulf the area the temple and its seven villages were abandoned. The idol was also removed from the monument 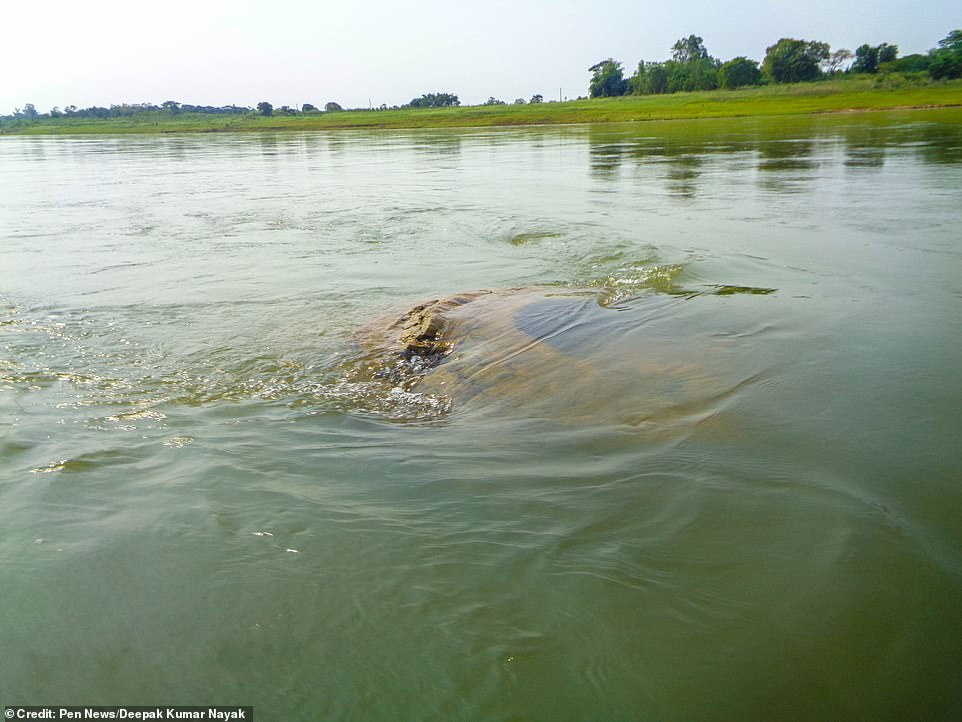 There are many hidden temples along the course of the Mahanadi river, but this one had proved particularly elusive

Images collected by the INTACH team show the amalaka – a notched stone disk that crowns a Hindu temple’s main tower – visible in the water.

An archaeologist’s sketch shows that only a tiny portion of the temple is visible at the surface, with the majority of the 60-foot structure hidden in the sand below. But that means that most of the structure will be in pristine condition.

‘Nearly all the rivers in Odisha have submerged temples, but many of them are in ruins.

‘Temples were built in the bends of rivers, and all these rivers were and are flood prone, so bank erosion resulted in many of them being destroyed or submerged by the waters.’ 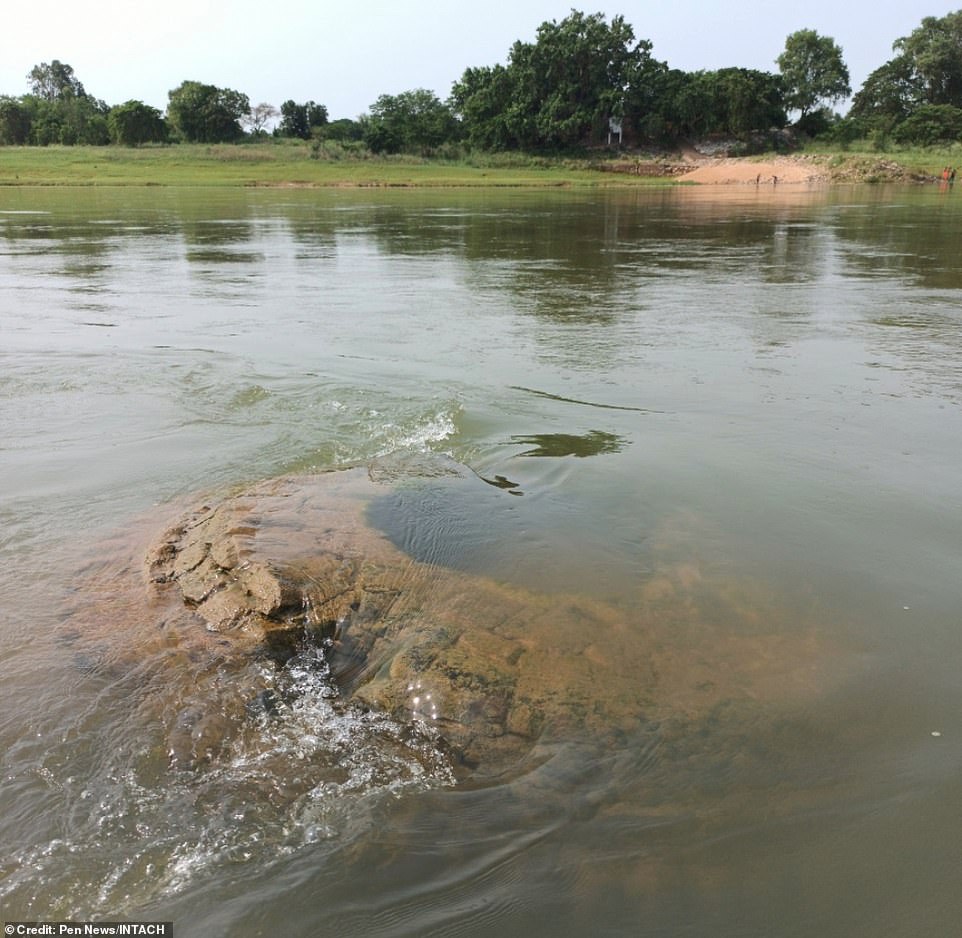 The Hindu temple was submerged by flood waters in the 1800s. Its spire used to be visible up to five feet every year until a barrage was constructed to raise the river level

Protector of the universe: Who is the Hindu god Vishnu? 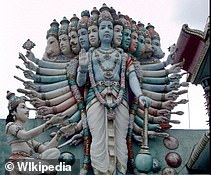 The god Vishnu and incarnations is shown above

Vishnu is considered to be the preserver god in Hinduism who protects the universe from destruction, and appears on Earth through various avatars, or incarnations, to save humankind.

His most well-known avatar is Rama, who slayed a demon king, and Buddha, the founder of Buddhism.

Lord Gopinath, who the temple is built for, is associated with Vishnu’s eighth avatar Krishna. In mythology, Lord Gopinath was with gopis, cow-herding girls, who Krishna grew up with.

Vishnu’s wife, Lakshmi, is the goddess of wealth and good fortune and receives special worship during the Divali festival.

She is said to appear as the wife to each one of Vishnu’s incarnations.

In art, Vishnu is typically represented with blue skin.

Anil said the temple was built by a local king in the sixteenth or seventeenth centuries, in the classical Kalingan Architectural style of the Rekha Deul.

It stands near modern-day Baideswar and once contained a black chlorite idol of Lord Gopinath, a form of the Hindu god Vishnu.

When it was flooded the idols were quickly removed and placed in the current Gopinath temple in Padmavati village, near the same river.

Mr Dhir emphasises that there are no plans to excavate the temple presently, lest thieves be drawn to the site.

‘It will be left alone,’ he said. ‘The river is a dangerous stretch at this place, with swift currents. Or else, idol thieves will try to get some old pieces from it.’

The INTACH team are documenting the monuments of the Mahanadi river valley, recording all tangible and intangible heritage on both the banks of the river.

An area of 6.2 miles from each bank is being surveyed, from the source of the river down to where its mouth, covering more than 1,000 miles.

The multi-volume report is thought to have identified some 800 monuments – including 65 ancient temples – and will be published next year.

It is the pilot project of INTACH, which it hopes will secure funding for future surveys.

Built near the north-western edge of Odisha state’s border, it was one of the first major dams started after India’s independence – and was completed in 1957.

It led the Mahanadi river to form the 30-mile long Hirakud reservoir.

This covered over an area known as Padmapur, which was one of the oldest and most populous places in the region before the dam was built.

Many temples that were submerged have been damaged or destroyed by years spent underwater.

Britain’s post-Brexit Galileo ‘rival’ is back – and it could be...