Honduran boy, 13, and his 9-year-old sister are found on small island between Mexico and the U.S.

Honduran boy, 13, and his 9-year-old sister are found on small island between Mexico and the U.S. by CBP agents after being abandoned by human smugglers

U.S. Customs and Border Protection found two abandoned children from Honduras on a small island located on the Rio Grande between Mexico and the United States.

CBP said that U.S. Border Patrol agents were conducting a surveillance mission along the river that divides the two nations when they responded to an emergency call after midnight Wednesday regarding the two siblings, a nine-year-old girl and 13-year-old boy.

Agents from the Eagle Pass Station approached the island near the Eagle Pass International Railroad Bridge and rescued the children after they were left behind by human smugglers. 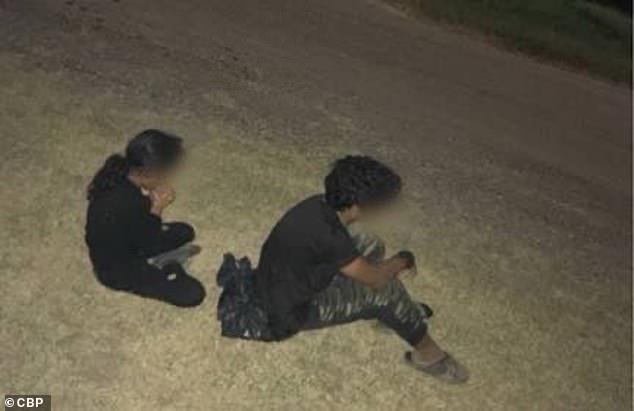 U.S. Border Patrol agents responded to a distress call after midnight Wednesday and discovered a nine-year-old girl (left) and her 13-year-old brother abandoned on a small island located on the Rio Grande. The Honduran children were given medical treatment and remained in custody of CBP

CBP said Border Patrol officers found the children to be in good health and that they didn’t display any signs of injuries before they were placed on the boat.

The Honduran boy and his sister were then transported to the Eagle Pass Centralized Processing Center where they underwent additional physical exam administered by doctors.

‘It is becoming far too common that parents place their children in the hands of smugglers who time and again show callous disregard for human life,’ said Del Rio Sector Chief Patrol Agent Austin L. Skero II. ‘Thankfully our agents were able to quickly locate these two small children and bring them to safety.’

Data released by CBP last Wednesday detailed how detentions of unaccompanied children rose throughout fiscal year 2020, spiking from 712 in April to 3,756 in September.

A three-year-old girl from Honduras was found by Border Patrol agents in Brownsville, Texas, after a woman from Venezuela was detained from unlawfully entering the United States from Mexico after she was spotted walking on the banks of the Rio Grande.

The children, ages seven, six, four, and four, were found walking alone along the river levee on the Rio Grande.  Each of the children had names and phone numbers written on their shirts.

‘The children were shivering and their clothes were wet. Agents immediately placed them in their service vehicles and turned on the heaters,’ CBP said in a statement. ‘The children were transported to the Border Patrol station where they were given dry clothes, food, and evaluated by medical staff.’

An American mother has been labeled 'manipulative and controlling' for offering to pay for her daughters' wedding gowns — but only if they agreed...
Read more
U.S

WASHINGTON — The Justice Department is quietly amending its execution protocols, no longer requiring federal death sentences to be carried out by lethal...
Read more

How to clean baby ears

Adults don’t tend to pay attention to their ears, simply choosing to let the water and shampoo skim over their ears while in...
Read more
Load more

Black teenager tased by Texas cops on his own doorstep as...