Neanderthals, Denisovans and Homo sapiens were so closely related that they were able to interbreed and have offspring that were fertile and healthy, a study suggests.

Analysis from the University of Oxford reveals the species were more genetically similar than brown bears and polar bears are today.

This significant overlap provided genetic compatibility and allowed the branches of humanity to overlap and have fertile and healthy chimeric children.

In the biological world, lots of animals are able to breach the species barrier and interbreed and produce healthy offspring, but it is rare for the offspring to be fertile.

Normally, hybrids such as the liger and the mule struggle to reproduce themselves, due to incompatible genetics often caused by differing amounts of chromosomes. 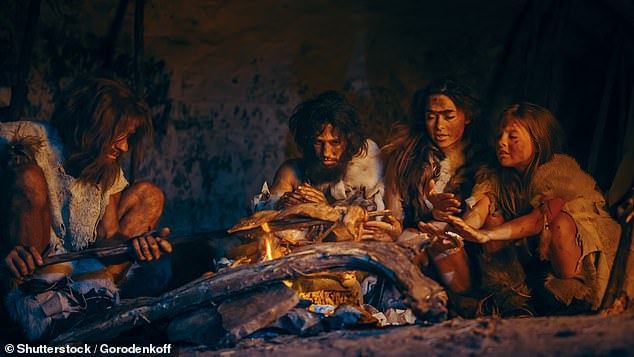 Neanderthals, Denisovans and Homo sapiens were so closely related that they were able to interbreed and have offspring that were fertile and healthy, a study suggests. The species were more genetically similar than brown and polar bears are today (file photo) 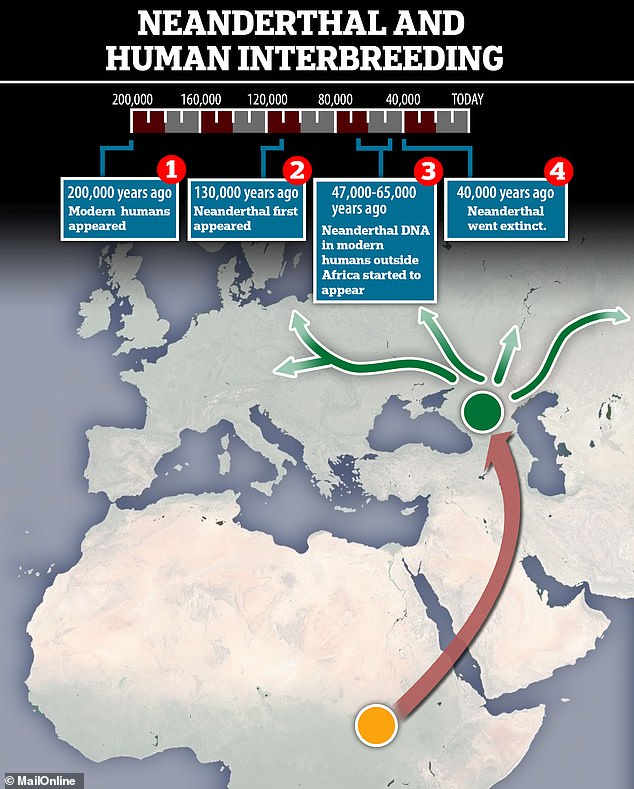 Producing viable offspring is a defining aspect of a species

A species is the most specific classification of a group of animals.

Within this group there is still variation, but they are all considered similar enough to be the same species.

For example, dogs have a variety of breeds, coming in different sizes, colours and temperaments. But they are all one species, known as Canis lupus familiaris.

One defining characteristic of what makes a species, is everything that exists inside the classification must be able to produce ‘viable offspring’.

That is to say, if two individuals mate, their offspring should be fertile and also able to reproduce.

There are some exceptions, as with all aspects of biology, but the rule is largely true.

For example, a great Dane can produce viable offspring with a Labrador, despite looking very different. This makes them part of the same species.

However, a rhino cannot have viable offspring with a hippopotamus, making them different species.

However, a study has now found prehistoric humans and their cousins did not have this issue.

They analysed the genomes of closely-related species and used computer modelling to determine how similar or distant they were from one another.

This then provided each pair with a value for their ‘genetic distance’ which could be used to compare various species on a like-for-like basis.

Extant species known to be closely related and able to produce viable offspring, such as coyotes and wolves, and brown bears and polar bears, were included in the analysis.

Preserved ancient DNA taken from the remains of ancient humans, Neanderthals and Denisovans was also studied.

The three species interbred in prehistory, and the DNA from the now-extinct Neanderthals and Denisovans can be found in human genomes to this day.

Genetic distance correlated to fertility of the hybrid offspring, it was found.

It confirmed that the greater the evolutionary distance between any two species, the less likely it is that the offspring between them would be fertile.

The genetic distance value was less for these hominin species than it was for the lupine and bear pairings, for example.

Professor Greger Larson of Oxford who is a senior author of the research, said: ‘Our desire to categorise the world into discrete boxes has led us to think of species as completely separate units.

‘Biology does not care about these rigid definitions, and lots of species, even those that are far apart evolutionarily, swap genes all the time.

‘Our predictive metric allows for a quick and easy determination of how likely it is for any two species to produce fertile hybrid offspring. 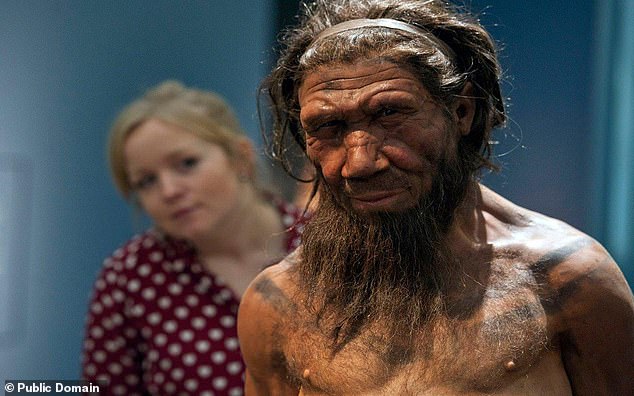 Homo sapiens WERE to blame for Neanderthal extinction

A supercomputer may have finally ended the debate over what caused the extinction of Neanderthals.

Mathematicians used the enormous processing power of the IBS supercomputer Aleph to simulate what happened throughout Eurasia around 40,000 years ago.

It revealed that the most likely explanation for Neanderthal extinction is that Homo sapiens, who migrated into Europe around the time of the extinction of Neanderthals, were better hunters and out-competed them for food.

Humans and Neanderthals are known to have overlapped and mated, but the superior brain power of Homo sapiens is thought to have eventually wiped out their distant cousins.

Experts have long quarrelled over whether it was tumultuous climate patterns, competition for food with Homo sapiens or the interbreeding with this new species that ultimately led to the demise of Neanderthals.

‘This comparative measure suggests that humans and Neanderthals and Denisovans were able to produce live fertile young with ease.’

As well as reaffirming our understanding of just how similar we are to our prehistoric sister species, the study also has use in the modern world.

Study authors suggest it could be used to predict the likelihood that any two mammal species can give birth to live hybrids.

This could later inform which species are placed together in zoos, and potential conservation programmes for the critically endangered.

Richard Benjamin Allen, joint first author of the study, says: ‘Many decisions in conservation biology have been made on the basis that related organisms that produce hybrids in captivity should be prevented from doing so.

‘Such an approach has not considered the significant role that hybridisation has played in evolution in the wild, especially in populations under the threat of extinction.

‘Our study can be used to inform future conservation efforts of related species where hybridisation or surrogacy programs could be viable alternatives.’

The full findings are available in the journal Proceedings of the Royal Society B.

The Neanderthals were a close human ancestor that mysteriously died out around 40,000 years ago.

The species lived in Africa with early humans for millennia before moving across to Europe around 300,000 years ago.

They were later joined by humans, who entered Eurasia around 48,000 ears ago.

The Neanderthals were a cousin species of humans but not a direct ancestor – the two species split from a common ancestor –  that perished around 50,000 years ago. Pictured is a Neanderthal museum exhibit

These were the original ‘cavemen’, historically thought to be dim-witted and brutish compared to modern humans.

In recent years though, and especially over the last decade, it has become increasingly apparent we’ve been selling Neanderthals short.

A growing body of evidence points to a more sophisticated and multi-talented kind of ‘caveman’ than anyone thought possible.

It now seems likely that Neanderthals had told, buried their dead, painted and even interbred with humans.

They used body art such as pigments and beads, and they were the very first artists, with Neanderthal cave art (and symbolism) in Spain apparently predating the earliest modern human art by some 20,000 years.

They are thought to have hunted on land and done some fishing. However, they went extinct around 40,000 years ago following the success of Homo sapiens in Europe.