More than 170 undocumented immigrants have been arrested in the second massive crackdown on illegal migrants in sanctuary cities by ICE in the past month.

The agency said the 172 arrests took place from October 3 through October 9  in Washington, D.C., Las Vegas, Seattle, Denver, Philadelphia, Baltimore and New York, where immigrants are shielded by local governments who don’t comply with ICE policies.

ICE said that more than 80 per cent of the individuals arrested were convicted or had pending charges but had been released into the community. 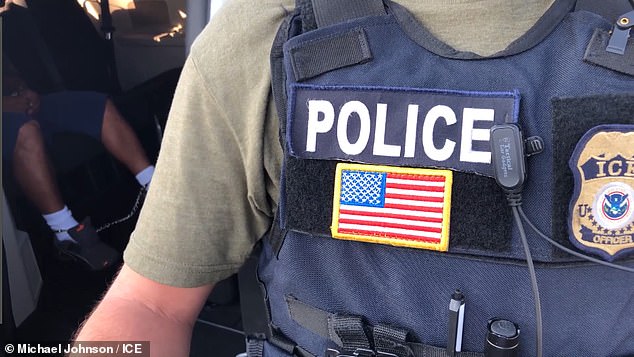 ICE agents have arrested 300 undocumented immigrants since September 28 in sanctuary cities. At least 172 were detained from October 3 through October 9 during operations that took place in Washington, D.C., Las Vegas, Seattle, Denver, Philadelphia, Baltimore and New York 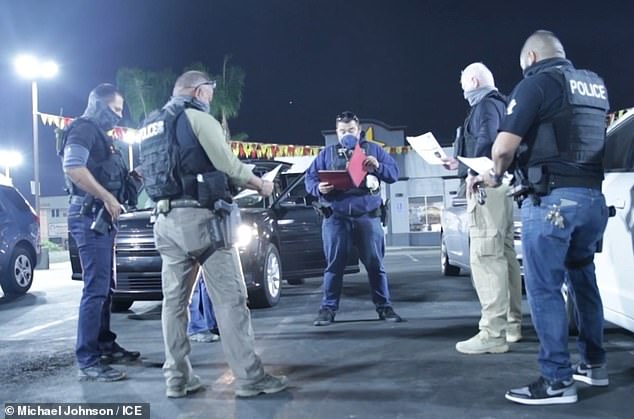 ICE agents gather during the first phase Operation Rise as the agency targeted sanctuary cities in  California from September 28 to October 3. ICE made the arrest of 128 undocumented immigrants who in the past were released from local or state law enforcement custody but had immigration detainers that called for their removal from the United States

The detentions are part of the agency’s ‘Operation Rise,’ as agents target undocumented immigrants in sanctuary cities ahead of the presidential election on November 3.

On October 8, ICE agents in New York detained a 64-year-old man from Panama who in May 2010 was convicted for ‘sexual conduct against a child in the 2nd degree.’ That same day, a 61-year-old man from Peru was apprehended for his February 2016 ‘conviction conviction for committing a criminal sex act in the 3rd degree with a minor.

Both men have been placed in ICE custody pending deportation.

Also on October 8, ICE agents in Virginia arrested a 28-year-old Mexican national who had been previously deported in 2013. The man reentered the United States following his removal and was arrested three times for felony forgery, identity theft and driving without a license. The agency filed three immigration detainers with the Albemarle Charlottesville Regional Jail, but he was released each time.

‘The men and women of ICE put their lives on the line every day to keep these individuals off the streets. The Department will continue to carry out lawful enforcement actions in order to keep our communities safe, regardless of whether or not we have cooperation from state and local officials. Politics will not come before safety when enforcing the law and keeping our citizens safe.’

‘ICE continues to protect communities by taking criminal [undocumented immigrants] off the streets regardless of any locality’s cooperation policies – which is part of our Congressionally mandated mission,’ said ICE Senior Official Performing the Duties of the Director Tony H. Pham.

US Election 2020: Trump says Thursday's GDP will be 'off the charts'

President Donald Trump told his supporters in Arizona if the nation's quarterly growth figure coming out Thursday isn't big that 'you don't even...
Read more
U.S

US Election 2020: Trump says Thursday's GDP will be 'off the charts'

President Donald Trump told his supporters in Arizona if the nation's quarterly growth figure coming out Thursday isn't big that 'you don't even...
Read more

Camilla, Duchess of Cornwall, 73, and Prince Charles, 71, have been married for 15 years and during this time they have carried out...
Read more
Load more