An undocumented immigrant from Guatemala on Friday was sentenced to 35 years in prison for murdering his 16-year-old ex-girlfriend in New Jersey and then attempting to escape from custody.

Bryan Cordero-Castro, 22, appeared before Superior Court Judge Marc Lemieux at  Monmouth County Courthouse and was handed a sentence of 30 years in prison for aggravated manslaughter.

He received an additional five-year prison term on the attempted escape charge, which is to run consecutively to the 30-year sentence. 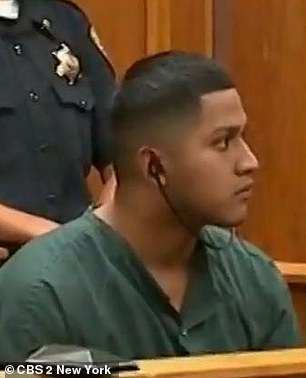 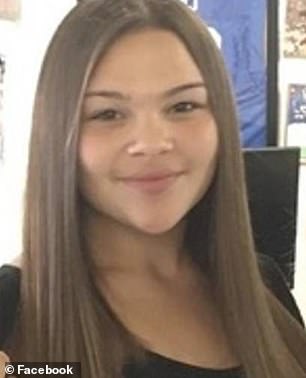 Bryan Cordero Castro, 22 (pictured in court in 2018, left), was sentenced to 35 years in prison after pleading guilty to aggravated manslaughter and attempted escape in the September 2018 fatal stabbing of Madison Wells, 16 (right)

Cordero-Castro pleaded guilty last November to killing 16-year-old Madison Wells by knifing her in the chest in front of her horrified family at her aunt’s home in Long Branch in September 2018.

The attack came after Wells broke up with Cordero-Castro, who refused to accept the split and continued bombarding her with hundreds of text messages.

The defendant later recanted his admission of guilt and made an unsuccessful attempt to withdraw his plea, claiming that his lawyer had deceived him.

Judge Lemieux said on Friday that he was disturbed by Cordero-Castro’s change of heart and accused him of taking no responsibility for his crimes, reported Asbury Park Press.

‘I see zero amount of remorse and I am extremely concerned this defendant doesn’t get the magnitude of what he has done,’ Lemieux said.

The victim’s relatives openly poured scorn on Cordero-Castro, hurling expletives at him and telling him to ‘burn in hell.’ 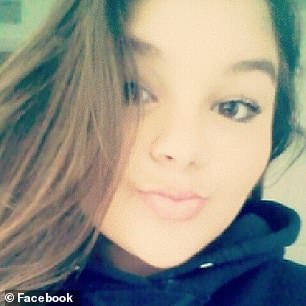 Wells was stabbed twice in the chest by her ex-boyfriend, who got her to come out and talk to him after bombarding her with 230 texts in a span of nine hours

Casey Wells, Madison’s aunt, called the ex-boyfriend a ‘coward’ for using jealousy as an excuse for killing her niece, and lamented that 35 years in prison was insufficient punishment for him.

When given a chance to speak, Cordero-Castro said: ‘Good morning, honorable judge and to all here present, but there’s nothing I can say.’

On September 8, 2018, at approximately 10.42pm, a 911 call was placed reporting a stabbing victim at a home on Van Pelt Place in Long Branch.

Police and EMS responded to the scene and found Madison Wells laying on the living room floor with stab wounds to her chest. She was rushed to Monmouth Medical Center where she was pronounced dead 40 minutes later.

An investigation determined that Cordero-Castro and Wells had been in a relationship for 10 months, but that the teenager had recently broken up with the older man.

In the nine-hour period leading up to the murder, Cordero-Castro texted and called Wells more than 230 times. Earlier in the day, the jilted boyfriend went to her aunt’s home on Van Pelt Place looking for her.

When he did not find her there, he continued to call and text her. Cordero-Castro ultimately went back to the aunt’s home, where Wells agreed to go outside and speak to him. 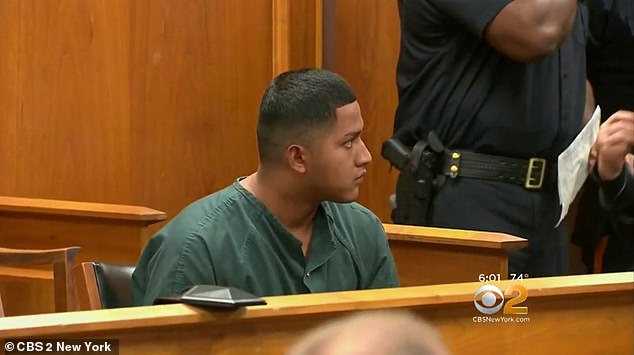 A few minutes later, the 16-year-old stumbled back into the house and collapsed on the floor from the stab wounds to her chest.

During sentencing, the judge said Wells’ family had desperately tried to protect her from Cordero-Castro, but instead they were force to witness her killing.

‘Her family members literally watched her die on the floor,’ he said.

Cordero-Castro was arrested at his cousin’s home on Morris Avenue in Long Branch two hours later.

Once at the Long Branch Police Department, Cordero-Castro attempted to escape by jumping up and trying to run out of the booking room after shouting, ‘bye,’ but he was quickly caught.

Under the provisions of the ‘No Early Release Act,’ Cordero-Castro will be required to serve 85 per cent of the term before becoming eligible for parole.