New book In The Limelight: The Visual Ecstasy of NYC Nightlife in the 90s dives into the club scene at hotspots like like Limelight, the Tunnel, Webster Hall, Club Expo, and Club USA with never-before-seen photos taken by prolific photographer, Steve Eichner.

Eichner was a fixture of 1990s nightlife and served as both its official and unofficial photographer in an era before cellphones and selfies. The book takes readers beyond the velvet ropes and into the spaces that witnessed some of the decade’s most raucous and sought-after parties.

He recalls that Trump ‘loved to get his picture taken’ and shares a photo of Joan Rivers being embarrassed of having her picture taken while being hoisted up by two shirtless men on her birthday. 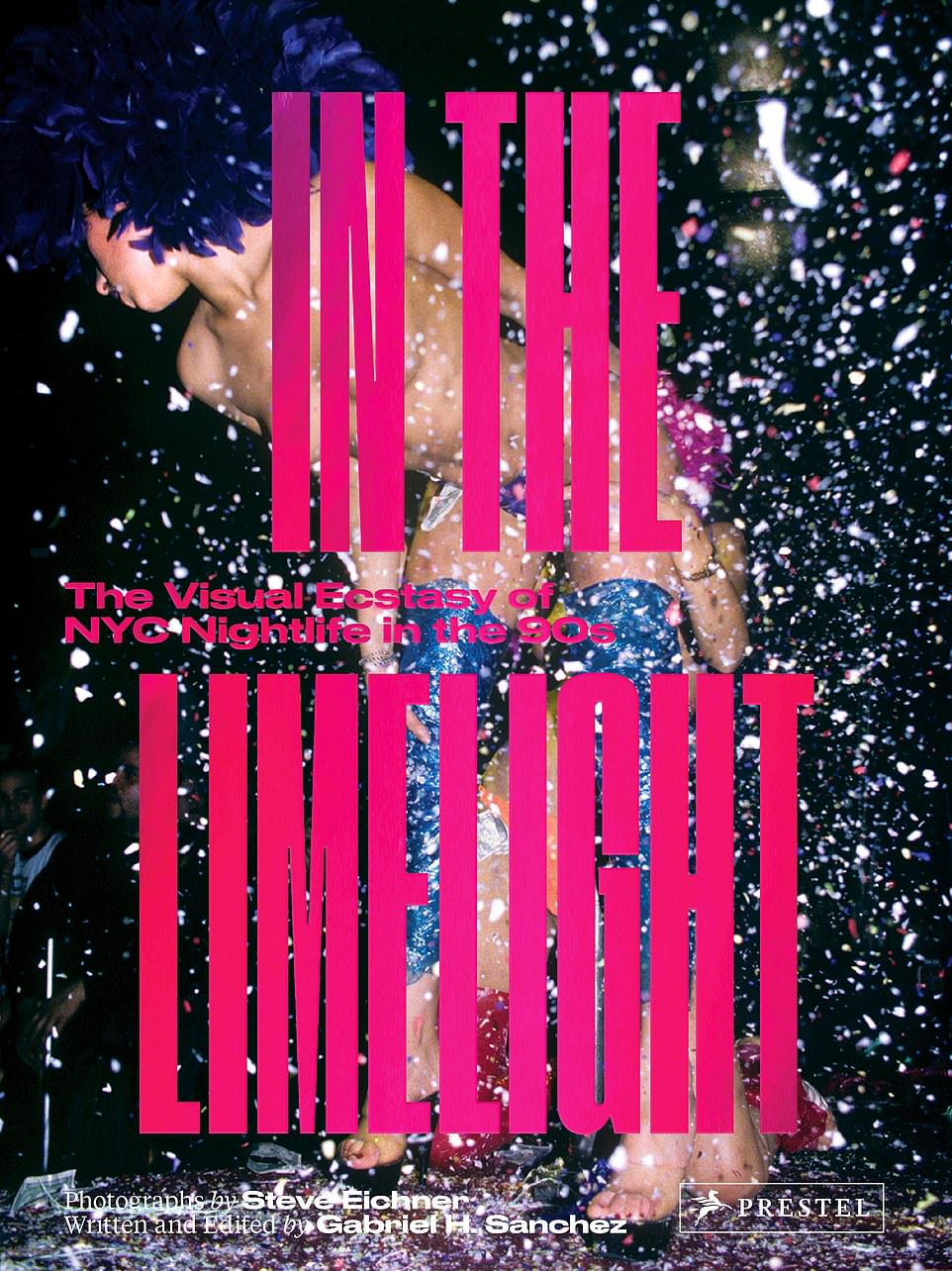 New book In The Limelight: The Visual Ecstasy of NYC Nightlife in the 90s dives into the club scene at hotspots like like Limelight, the Tunnel, Webster Hall, Club Expo, and Club USA. Never-before-seen photos taken by prolific photographer Steve Eichner show eccentric costumes and drug-fueled parties with A-list partygoers 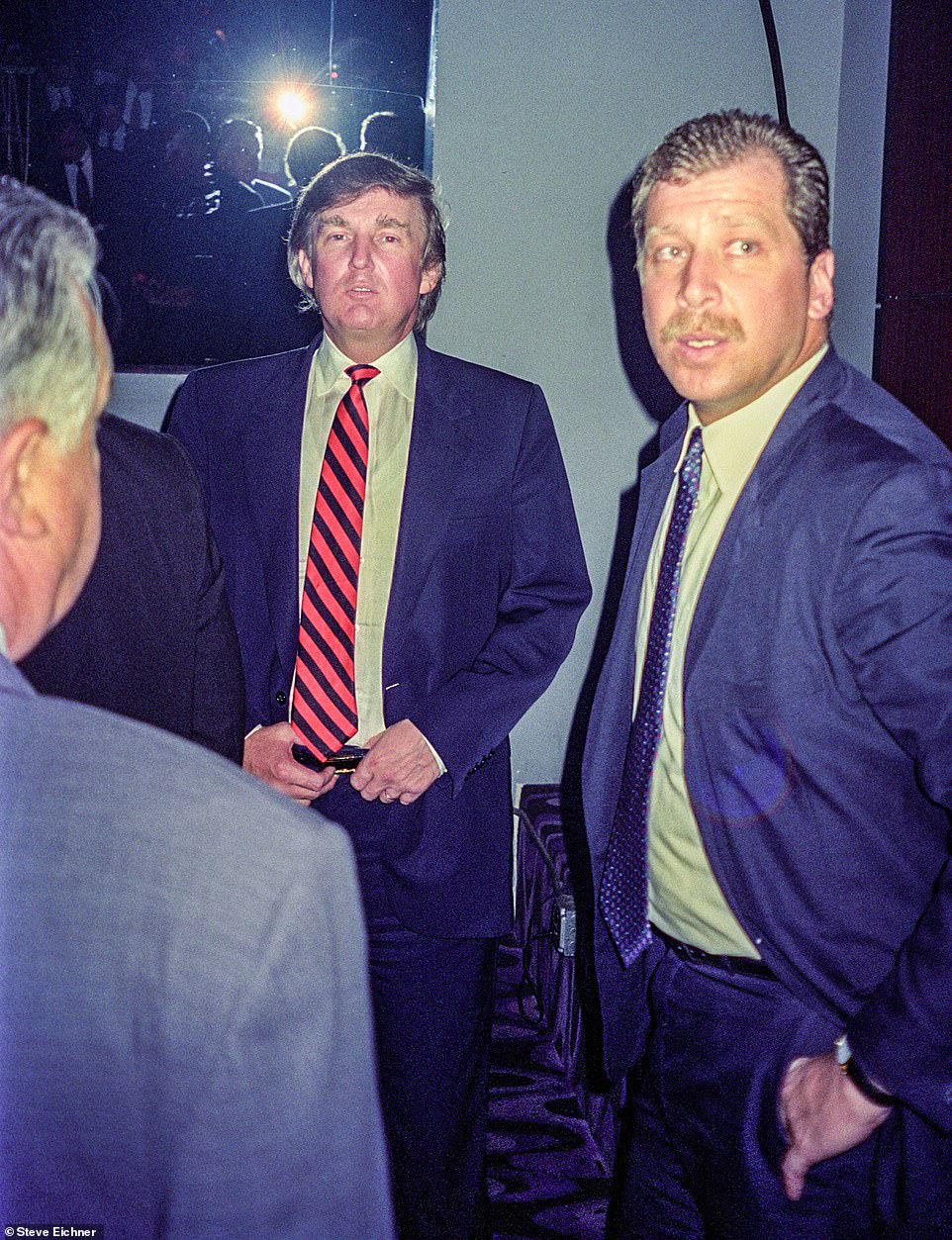 A-listers: Donald Trump was a regular on the VIP balcony of Club USA in New York City. He’s pictured in 1994. The author writes of businessman Trump, ‘He loved to get his picture taken. Anytime I would ask for a picture and he would stop whatever he was doing and pose for a picture’ 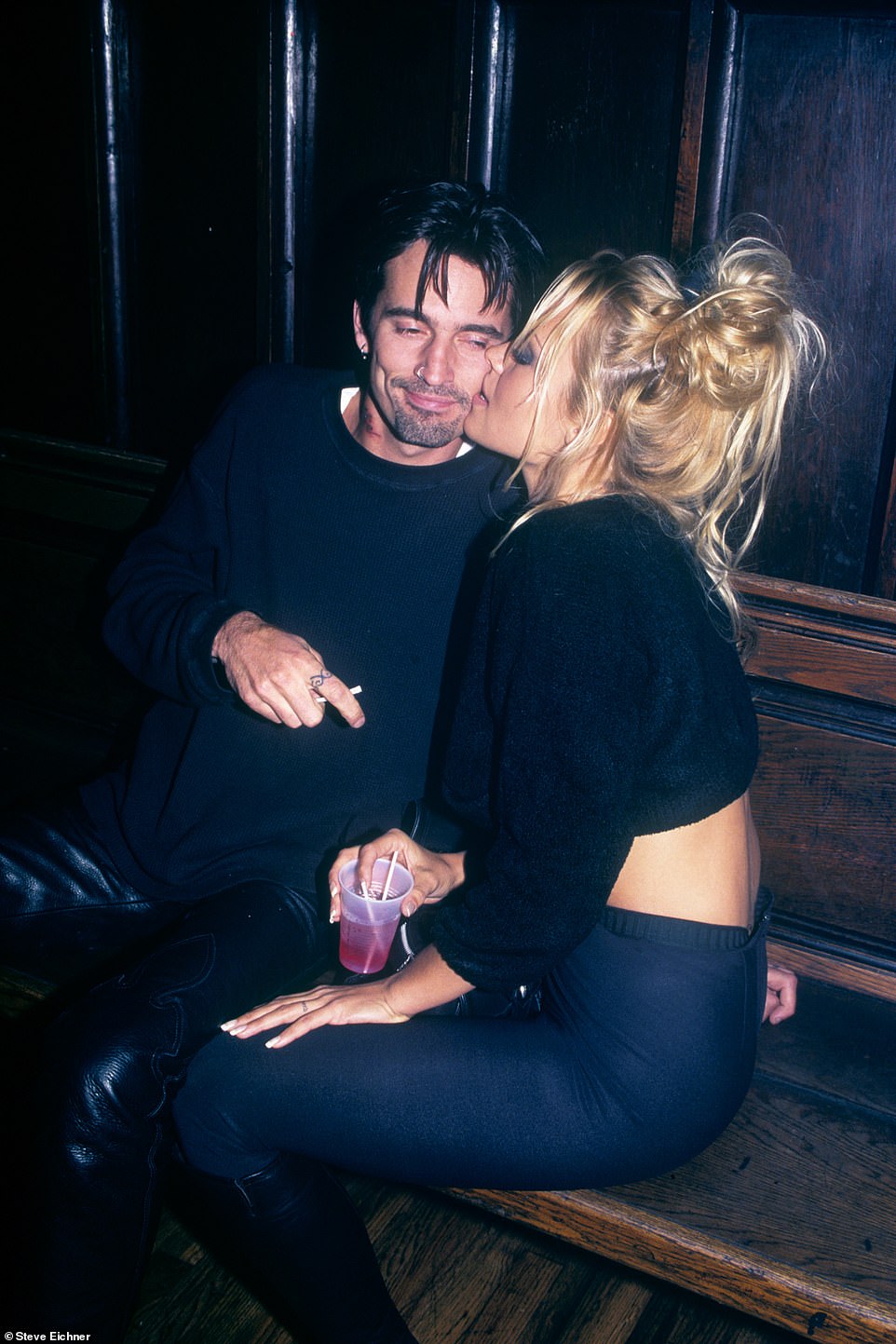 Newlyweds: Tommy Lee and Pamela Anderson at the Limelight in 1995. This photo was taken when they were at the height of their fame – she was on Baywatch and he was in Motley Crue and they were recently married just a few months before this photo was taken. The author writes, ‘I remember for some reason it is during the day, I don’t know if they were there promoting something or just checking out the club but you know they’re sitting on a church pew because the Limelight was an old church that was bought by Peter Gatien and turned into a night club’ 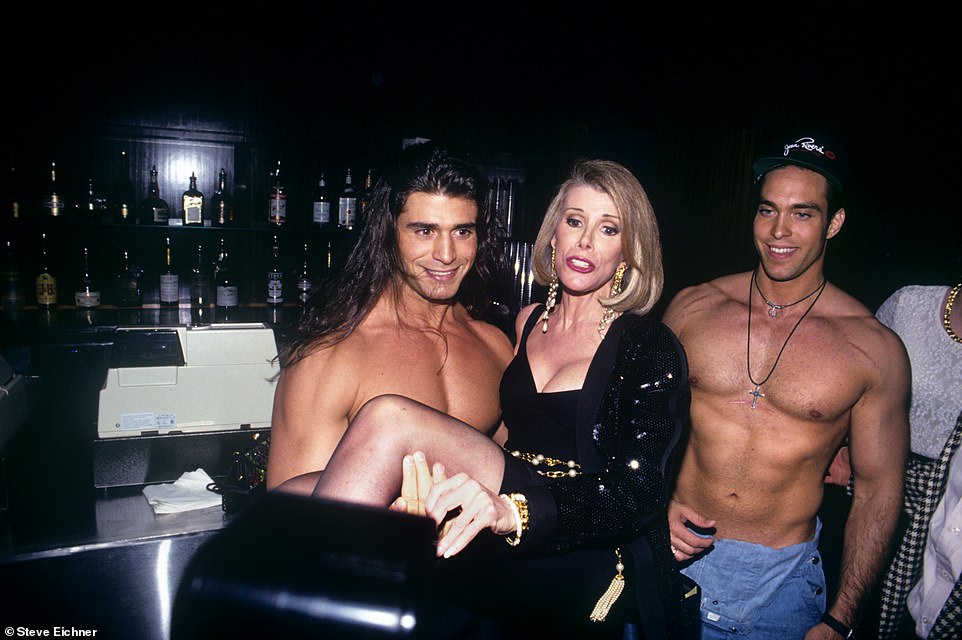 Birthday girl: Joan Rivers is seen at Club USA, in 1993 where she celebrated her birthday while being hoisted in the air by shirtless men. The author writes, ‘These guys, like totally buffed out models, were like carrying her around and I’m snapping pictures and they did a birthday cake and at some point, she pulled me aside and she said ‘Would you please not use those pictures of the guys.’ Her stand-up comedy was so raunchy yet she was shy about this photo’ 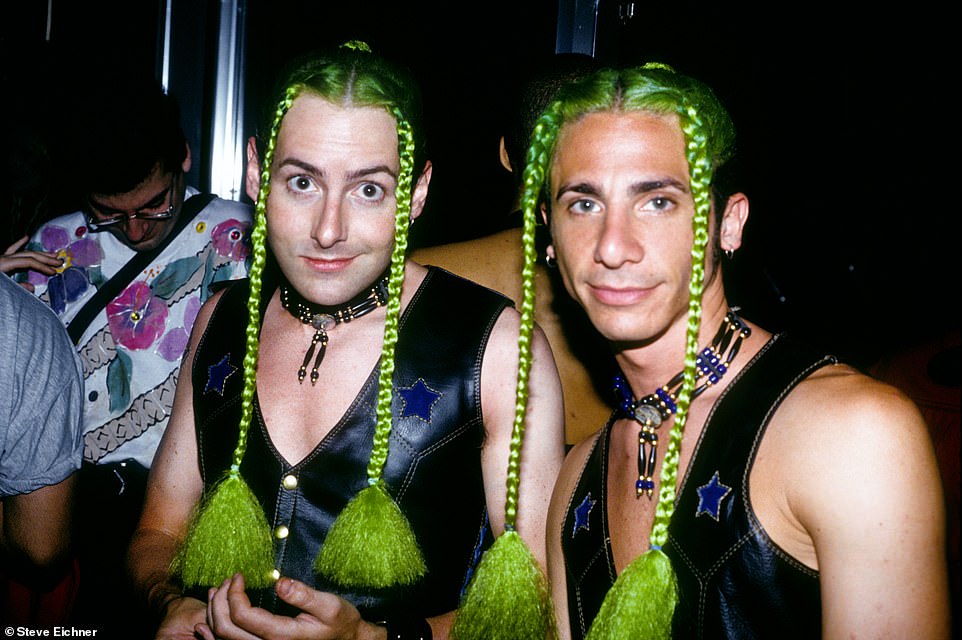 Party twins: The ‘It Twins’ were famous club kids and party promoters. Though they were not actual twins or even related, they ran around the nightclubs always dressed in matching outfits, like these green wigs with pigtails. They’re pictured at the Roxy in 1993 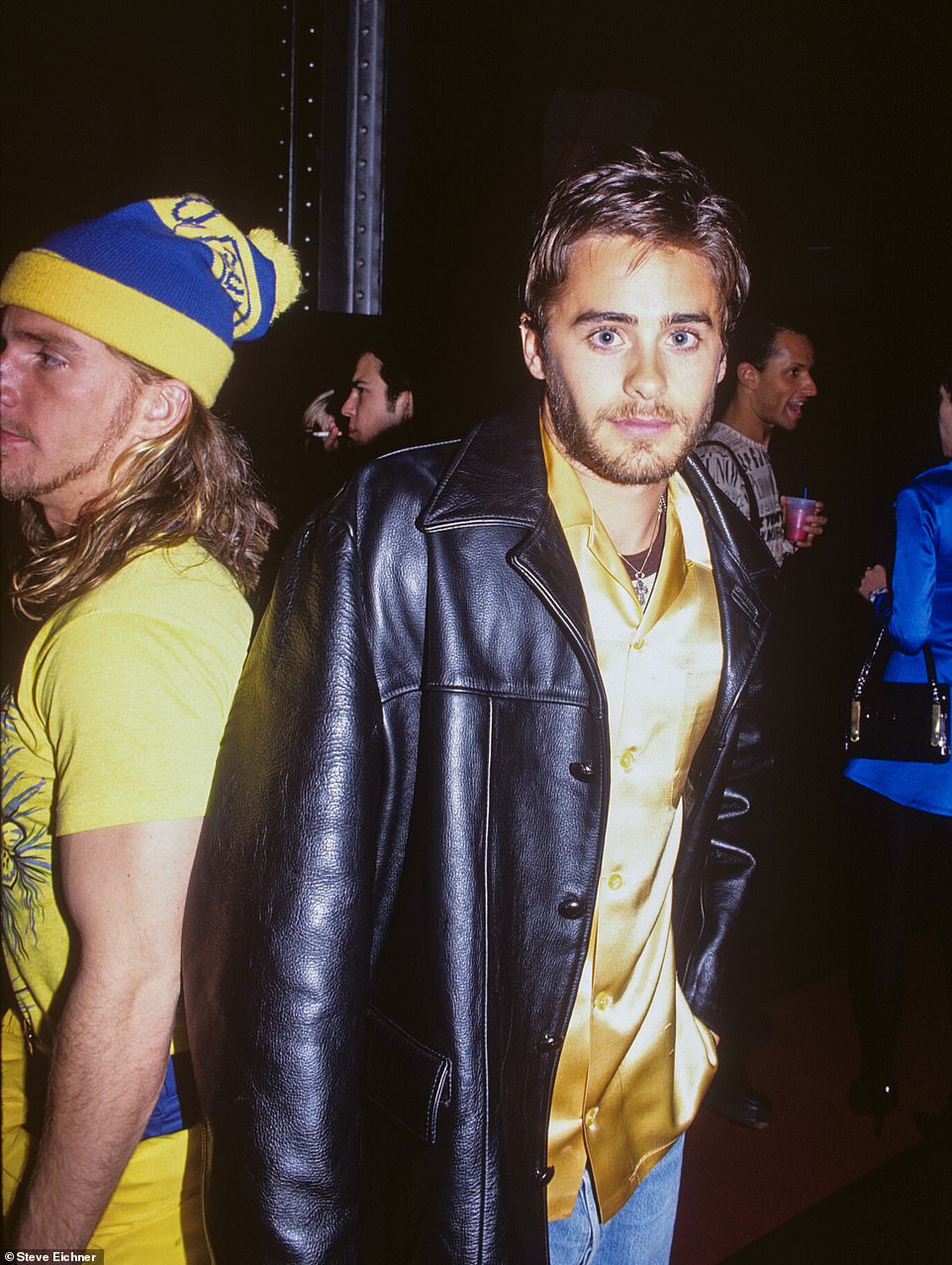 Young Leto: Jared Leto was a fixture on the 1990s New York club scene. He’s pictured at the Tunnel in 1995.  ‘I always remember him as a nice quiet guy that dressed really cool and had stunning good looks. In 1995 when this photo was taken he already had fame playing the role of Jordan Catalano on the television series My So called Life,’ the photographer recalls 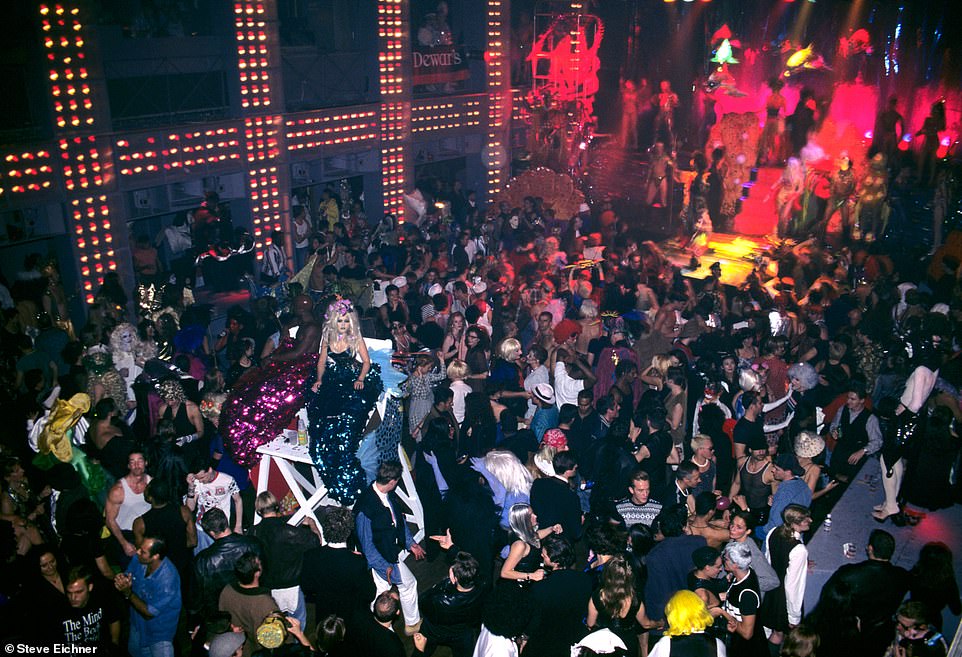 Dance floor: An overview of the massive dance floor at Palladium during an insanely creative fashion party hosted by nightlife diva Suzanne Bartsch. Drag queens dance on platforms while partygoers enjoy libations while the music pumps. ‘That was one hell of a party. I hope we can do that again one day,’ the photographer recalls 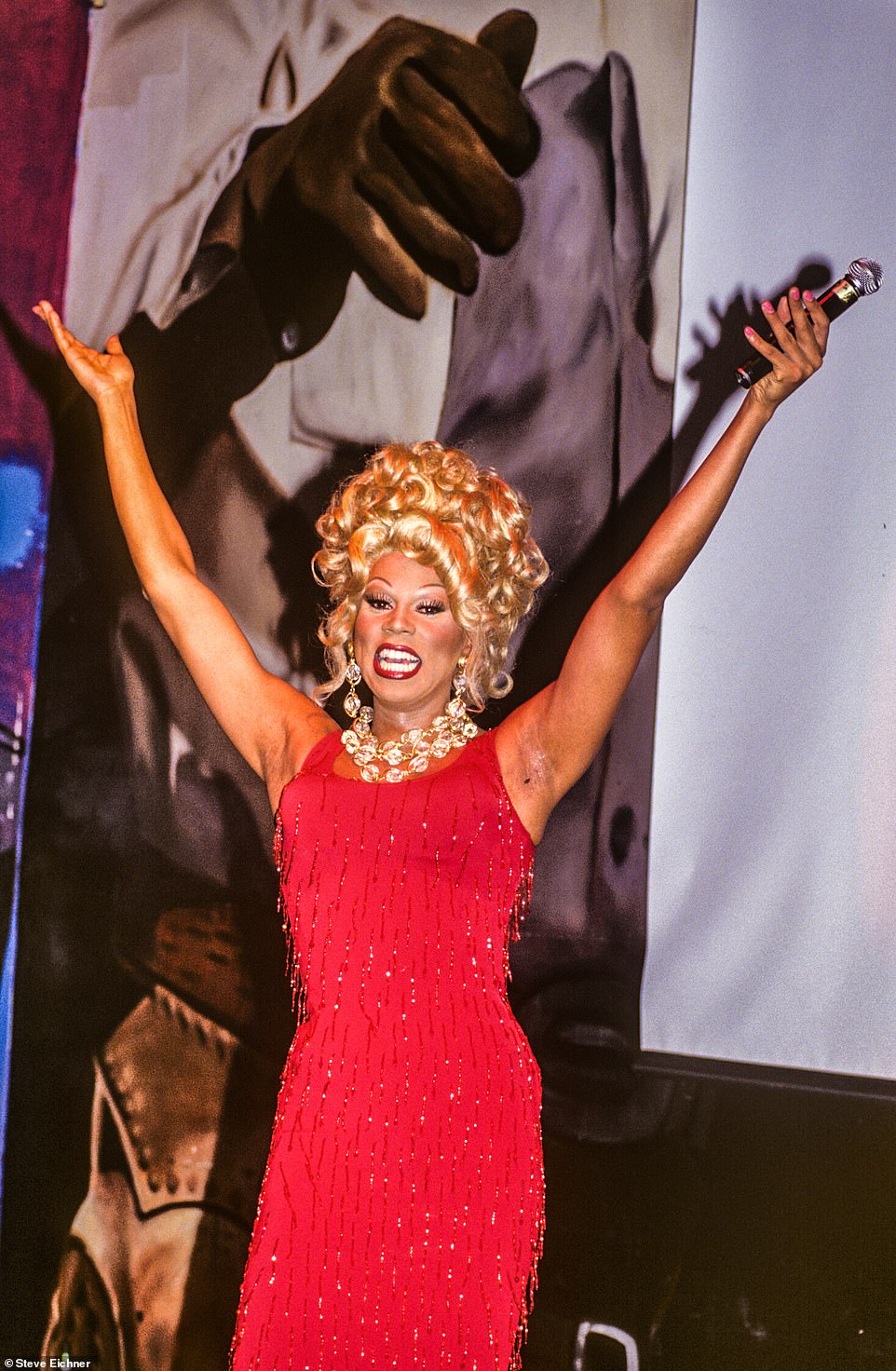 Primtime drag: RuPaul is seen at Club USA in 1993. ‘When this photo was taken RuPaul had instantly transformed from a club personality just known in NYC into an international superstar,’ the author recalls. ‘This photo was taken during a performance of Supermodel (You Better Work). The song became a hit and was on heavy rotation on MTV’ 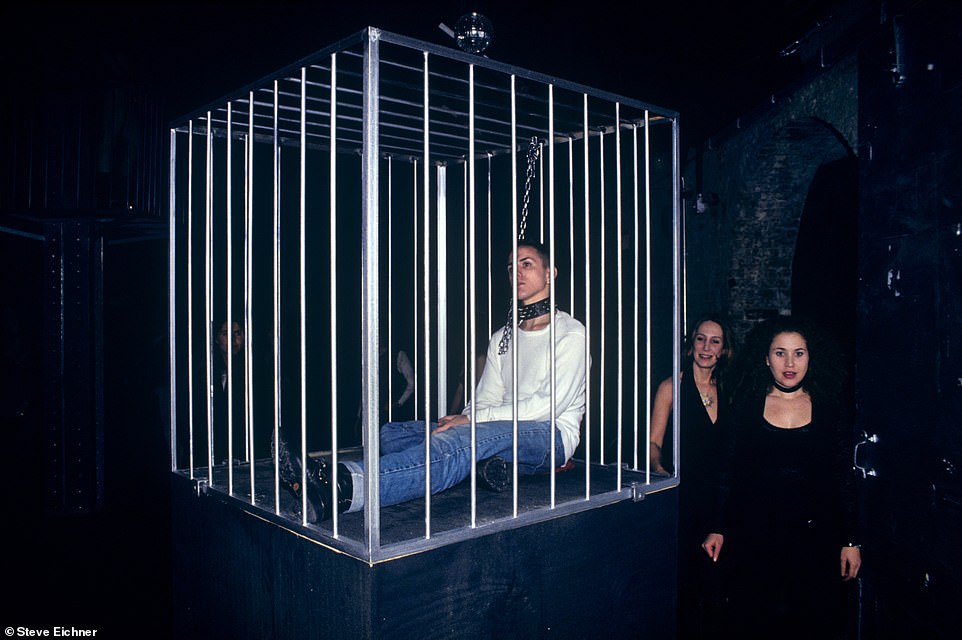 Caged in: An art installation is seen at the Tunnel in 1993. ‘I never knew what to expect when I walked into a club on any given night,’ Eichner says. ‘The creativity and push to excite and entertain was a key theme running through 1990s clubland. Art installations were a big part of keeping things fresh and exciting. On this night an ‘insane asylum’ theme was the expression du jour. Nurses and doctors roamed around performance artists in cages,there was a person in a straight jacket and another in a padded cell. The inmates were running the asylum’ 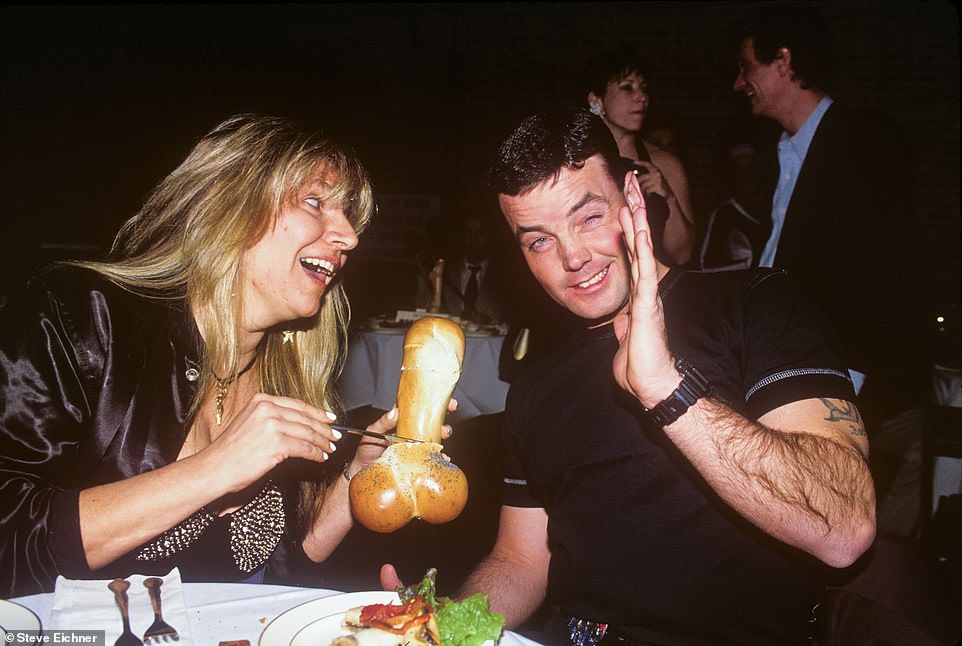 Penis party: Robin Byrd and John Wayne Bobbitt are pictured at the Tunnel in 1994. Michael Musto the legendary nightlife reporter, hosted a party for John Wayne Bobbitt who famously had his penis cut off by his wife Lorena who proceeded to take a drive and throw it into a field where it was later found and reattached. ‘The food was basically a mockery of his unfortunate incident. You can see the bread loaf is the shape of a penis,’ Eichner writes. ‘I had an idea for a photo op. We sat Robin Byrd, a TV host and former adult film actress next to John and gave her a knife. Robin got the concept instantly and proceeded to cut the bread phallus at its base. The reaction on Bobbit’s face was priceless as if he was reliving the painful incident’ 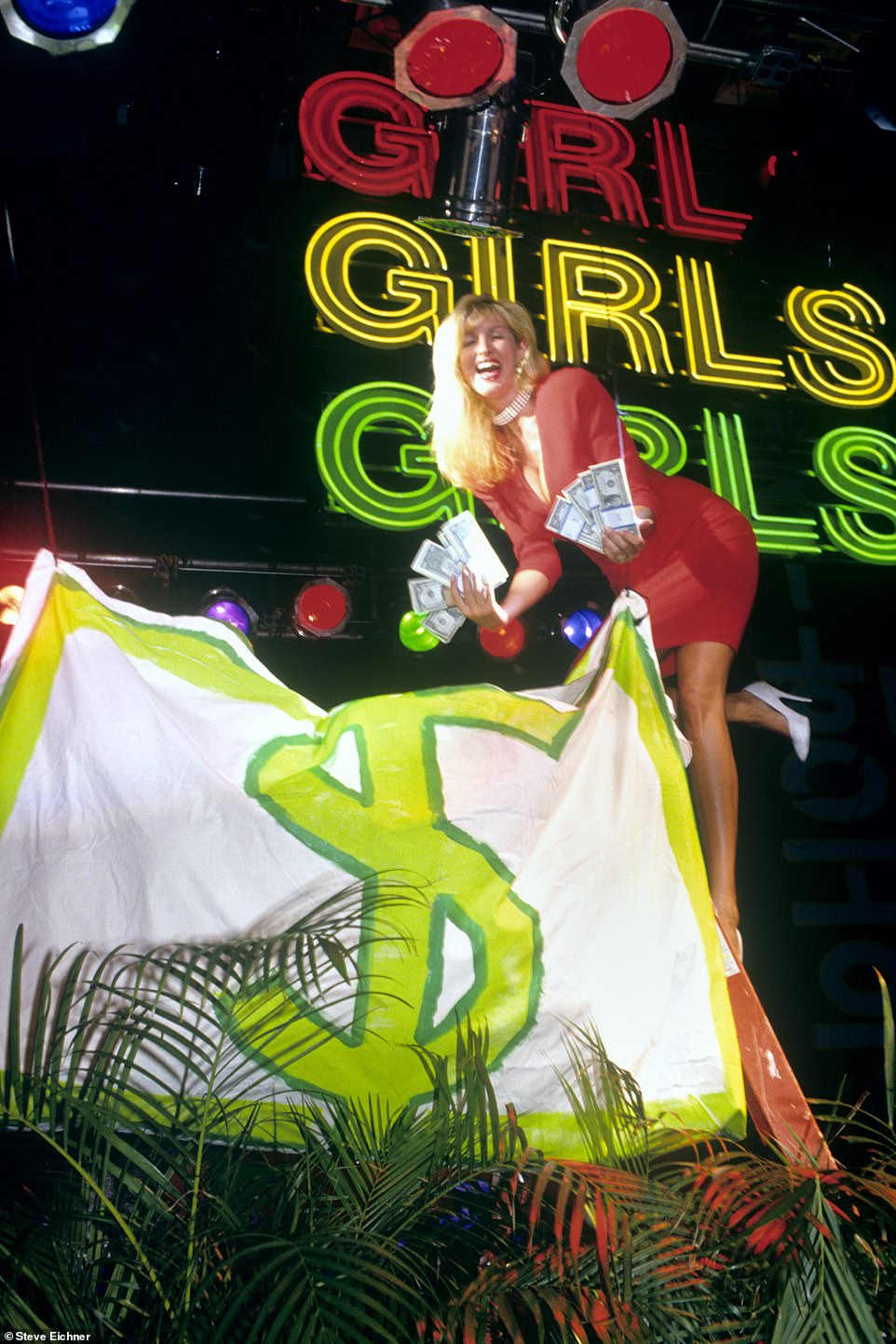 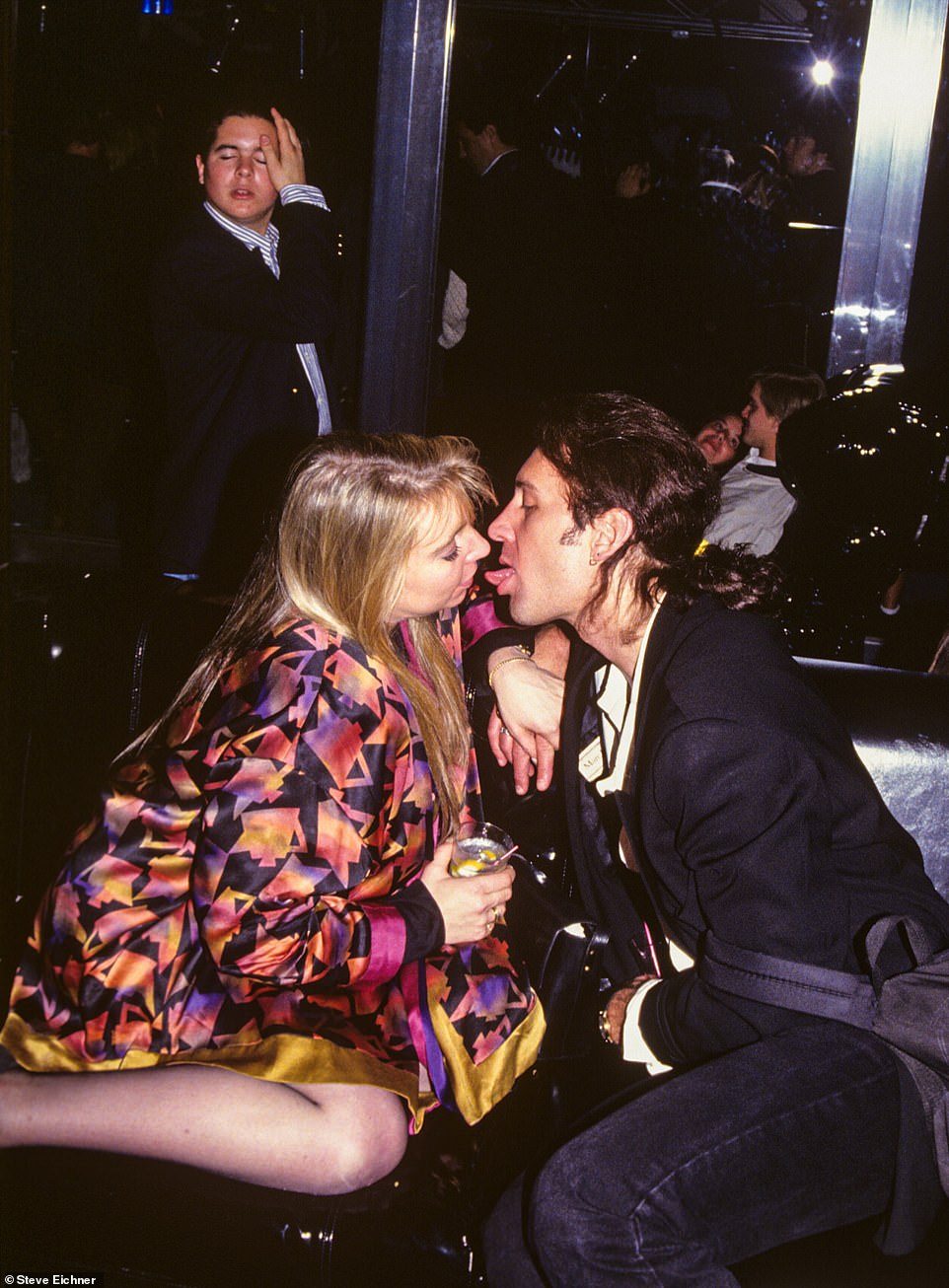 Steal a kiss: ‘The S&M balcony at Club USA was a great place to make out or do even more,’ Eichner says of the 1994 pics. ‘ I would walk through with my camera and snap photos of people in all phases of these activities. This particular photograph I call the ”the happy accident”. It was really dark so I could not see exactly what was happening. I pointed my camera at these two people kissing on the sofa and snapped. To my surprise when I viewed the developed film I realized that I had caught ‘t’he decisive moment”. The guy sticking his tongue out and the girl’s mouth waiting to receive it. And the kicker is the dude in the background wiping the sweat from his forehead’ 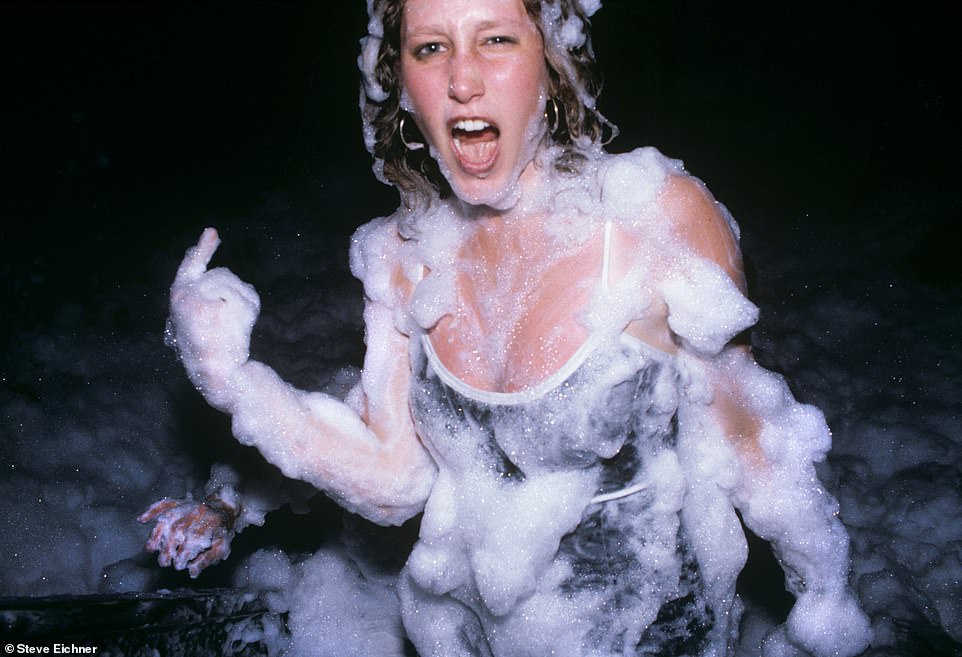 Shampoo room: The Limelight club had a shampoo room which was an entire room filled with thick foam in which people swirled to thumping music and dancing in the foam and throwing the foam in the air. ‘I thought it was the greatest idea ever. the author writes of the 1995 photo. ‘Imagine being drunk or high and you discover this soap pit of joy. You jumping with your friends and swish around in there. I had to get in there myself once or twice. Good clean fun! Another stroke of genius was once you are done, the suds are blown off of you with a leafblower’ 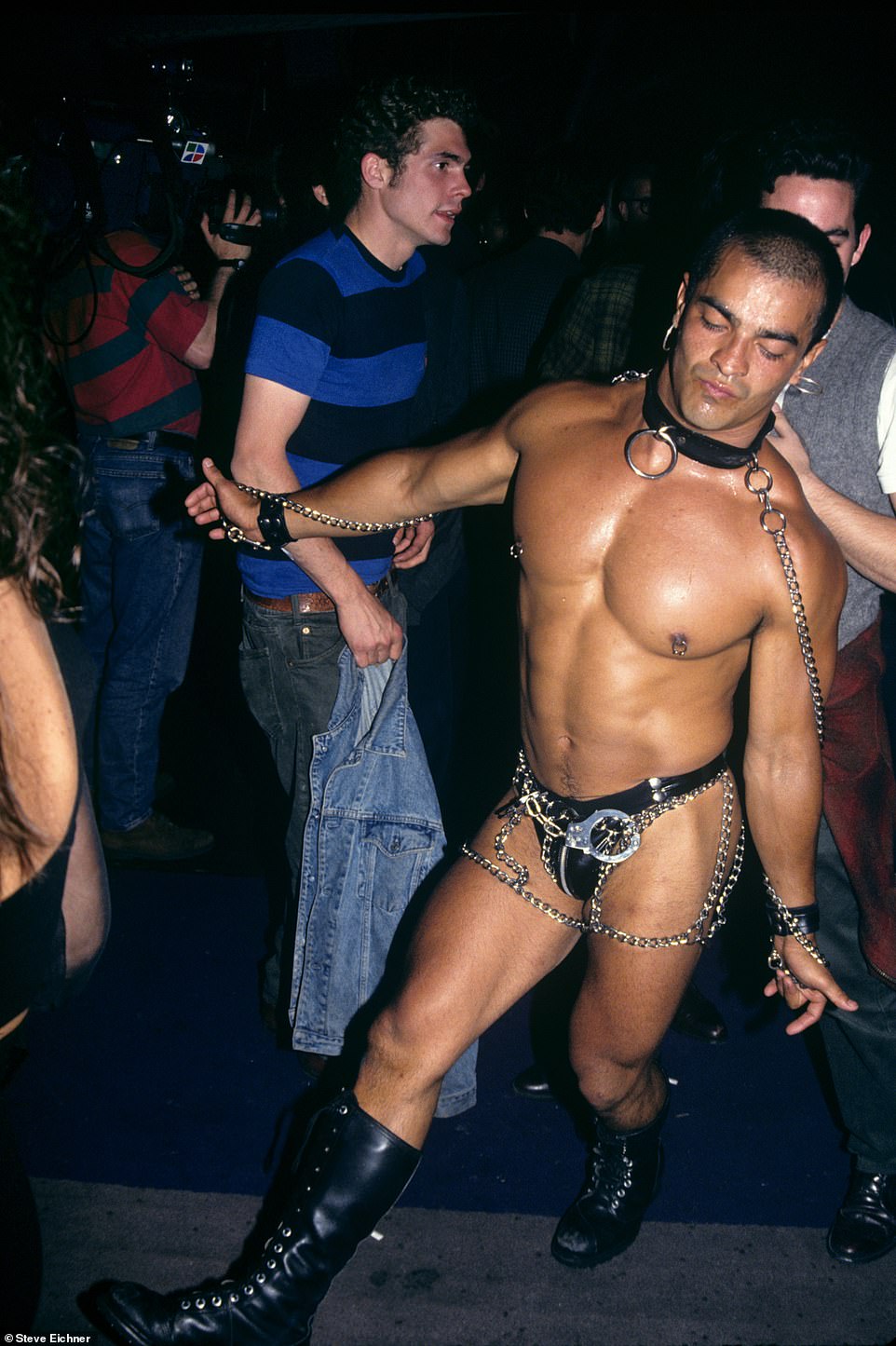 Leather and chains: A dancing clubgoer is seen at Club USA in 1993. ‘This is one of my favorite photos in the book and kind of says it all about the 1990s club scene in NYC,’ the photographer says. ‘Anything goes! Here we see a very fit man dancing to the music in boots and a leather G-string and nothing else except his bondage accessories, handcuffs and a leash’ 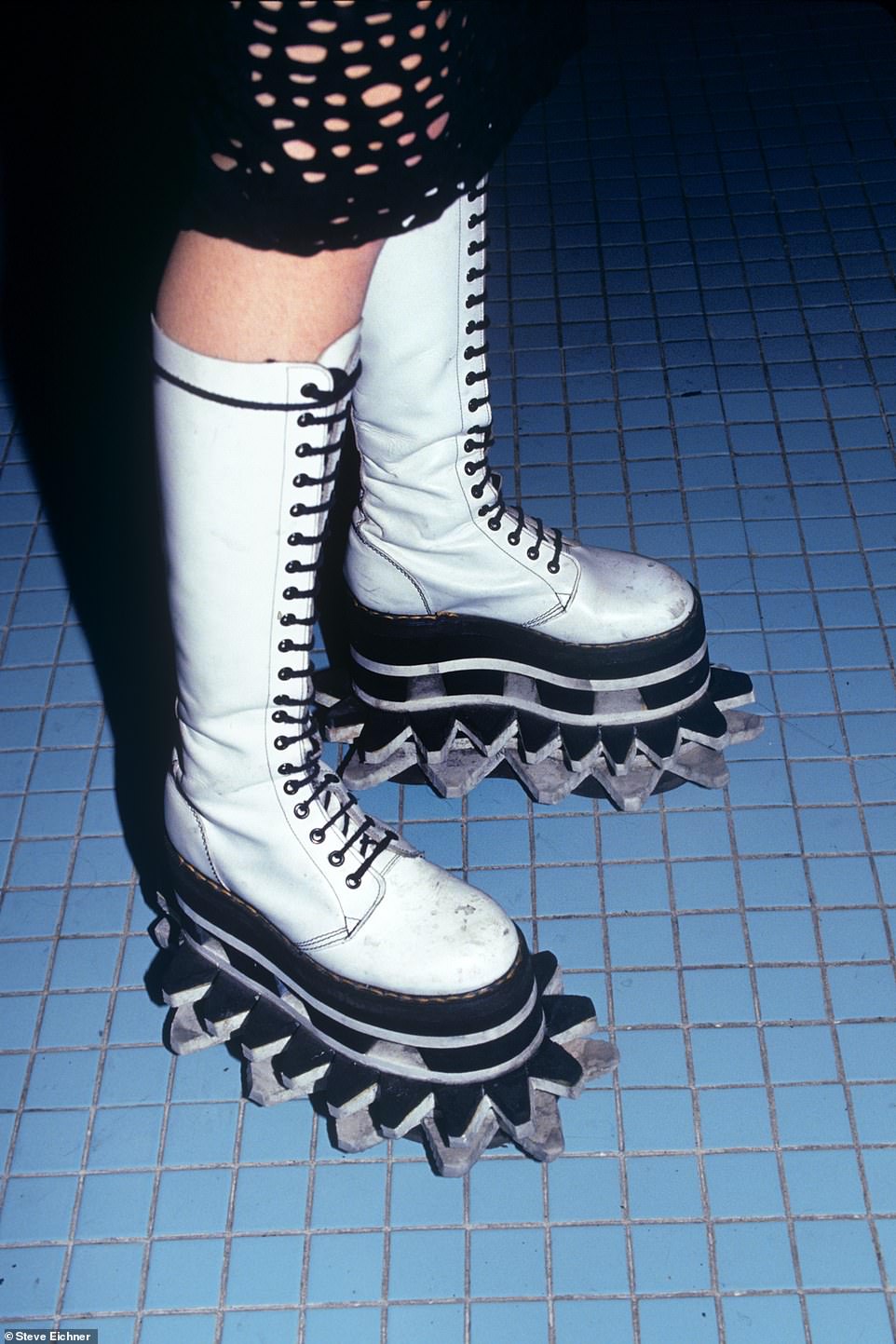 In style: Sky-high platform shoes were all the rage seen in this photo at the Limelight in 1993. ‘Usually, homemade, and the taller the better,’ the author writes. ‘Start with a pair of doc martins or sneakers the glue together flat foam pieces stacked up in multi-colors. Cut the edges into jagged patterns and voila! The wearer of these shoes towered over the crowd. It was hilarious watching the club kids try and walk in these things. They had the strangest gait to avoid falling or kicking someone with the points. The funniest was watching them try to navigate a staircase’ 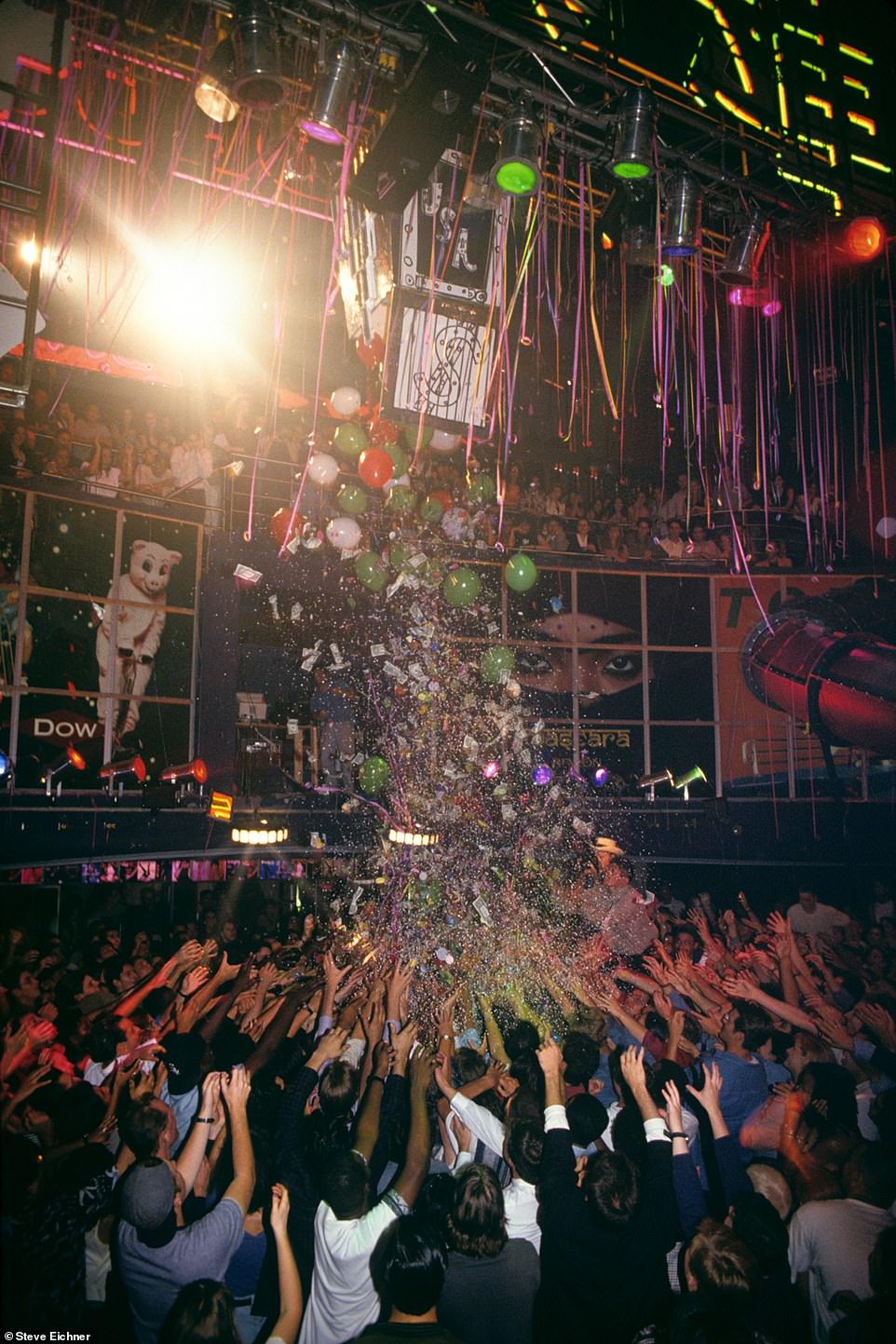 Money Drop: ‘The money drop at club USA was really quite funny,’ Eichner says. ‘They would promote this as a big thing where you could get a bunch of money. At 2am there was a count down and everyone in the club crowded onto the dance floor. The bag of money hanging from the ceiling opened up and it rained dollar bills onto the crowd. People went crazy sometimes pushing and shoving to get a few bills. The thing that makes it funny is I learned from one of the managers that there was only like $1,000 in the bag. That’s a drop in the bucket for the club and with all those people. If anyone got more than $10 it was a miracle. Not worth risking your life for’ 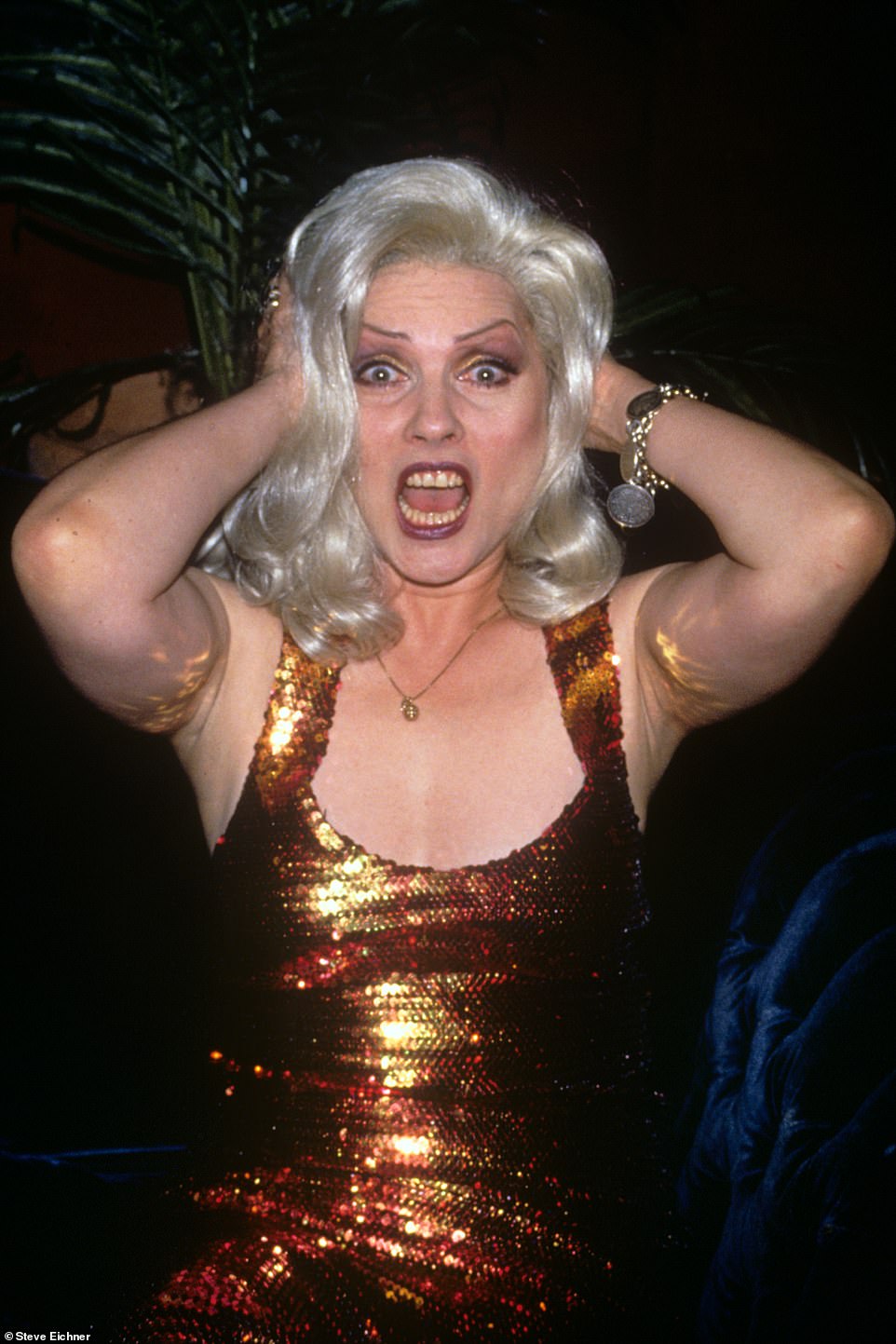 Sparkle and shine: Debbie Harry is seen at the Roxy in 1994. ‘I love the energy and the pose and her gold sequin dress. This photograph wound up being published in a magazine with the caption ”Is that Debbie Harry or a drag queen doing Debbie Harry”,’ Eichner says 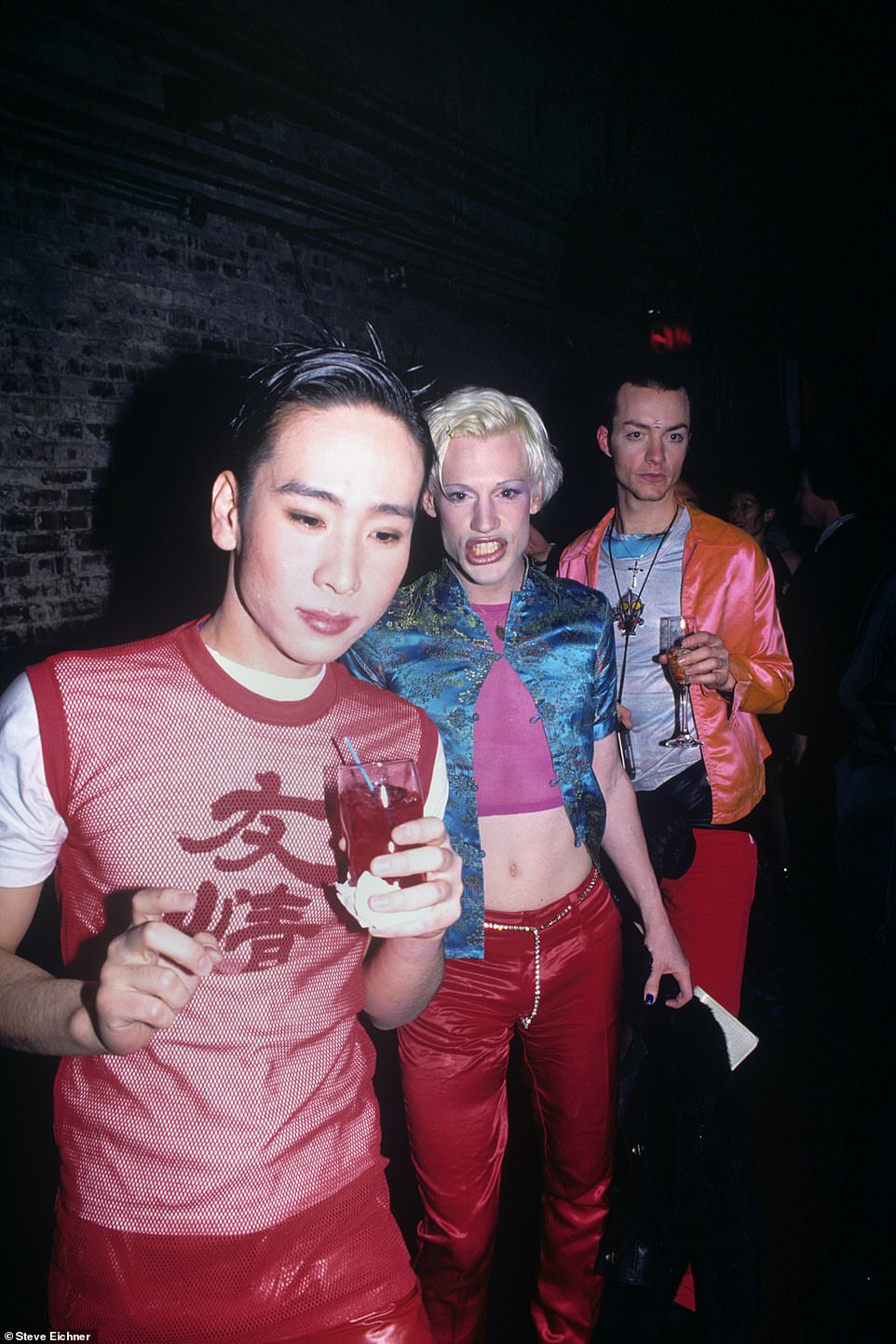 The original club kids: Sushi, Richie Rich and Zachary Augustine at the Tunnel, in 1995 were three of the original Club kids. They’re see with drinks in hand walking through the massive Tunnel club, which was once an actual train tunnel. ‘The club kids were the ring leaders and promoters for many of the craziest parties of the 1990s. They dress outlandish in your face styles and push the limits of androgyny and sexuality,’ the author writes 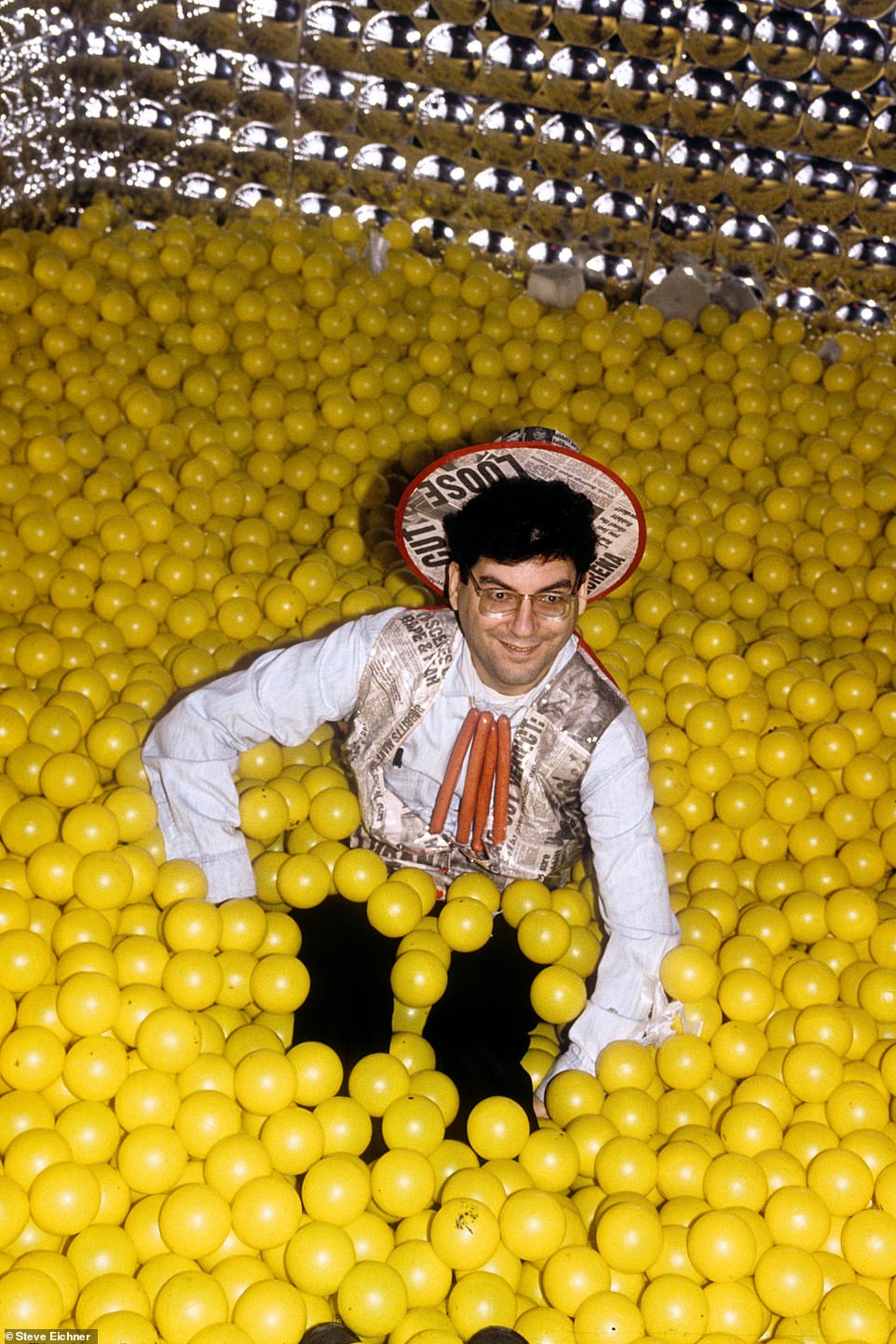 Ball pits: Michael Musto is seen at the John Wayne Bobbitt party that he hosted at the Tunnel in 1994. ‘Musto wore an outfit fitting of he occasion made of tabloid newspapers and the piece de resistance hotdogs strung together as a necklace. To top it all off I put him in the ‘ball room’ for the photo op,’ the photographer says 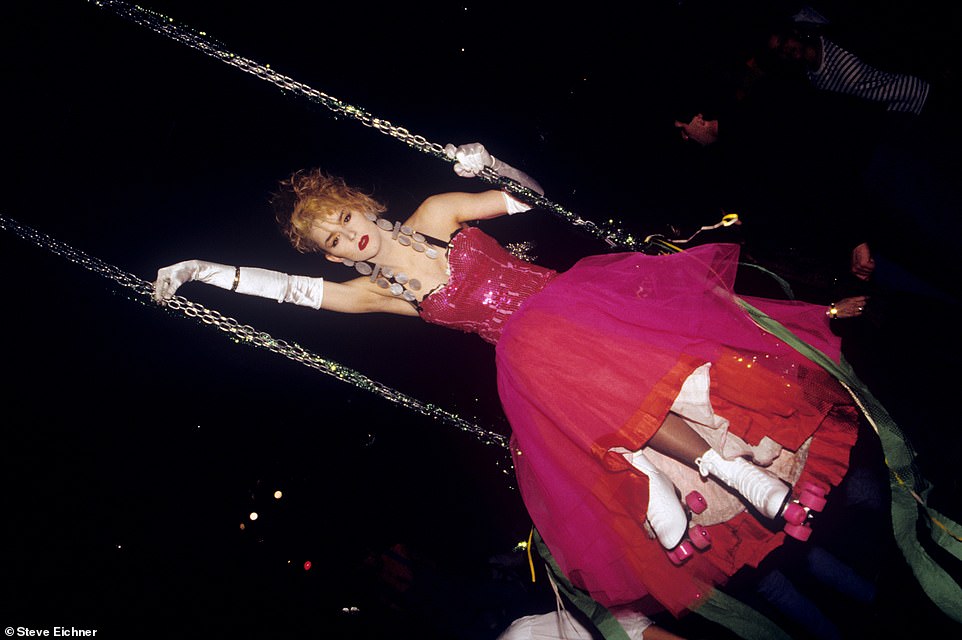 Drag queen on a swing: Roller rink turned nightclub the Roxy in 1990. Eichner writes that the Roxy ‘was my first love as far as mega clubs’. He recalled, ‘Roller skaters would wizz around while Madonna music blasted from the sound system. A Drag queen in a rose-colored formal gown and pink roller skates swung from a swing high above the dance floor. All around the periphery club kids pranced around drinking Absolut and cranberries they got for free with drink tickets. Upstairs in the VIP area supermodels like Naomi Campbell popped champagne with rock stars’ 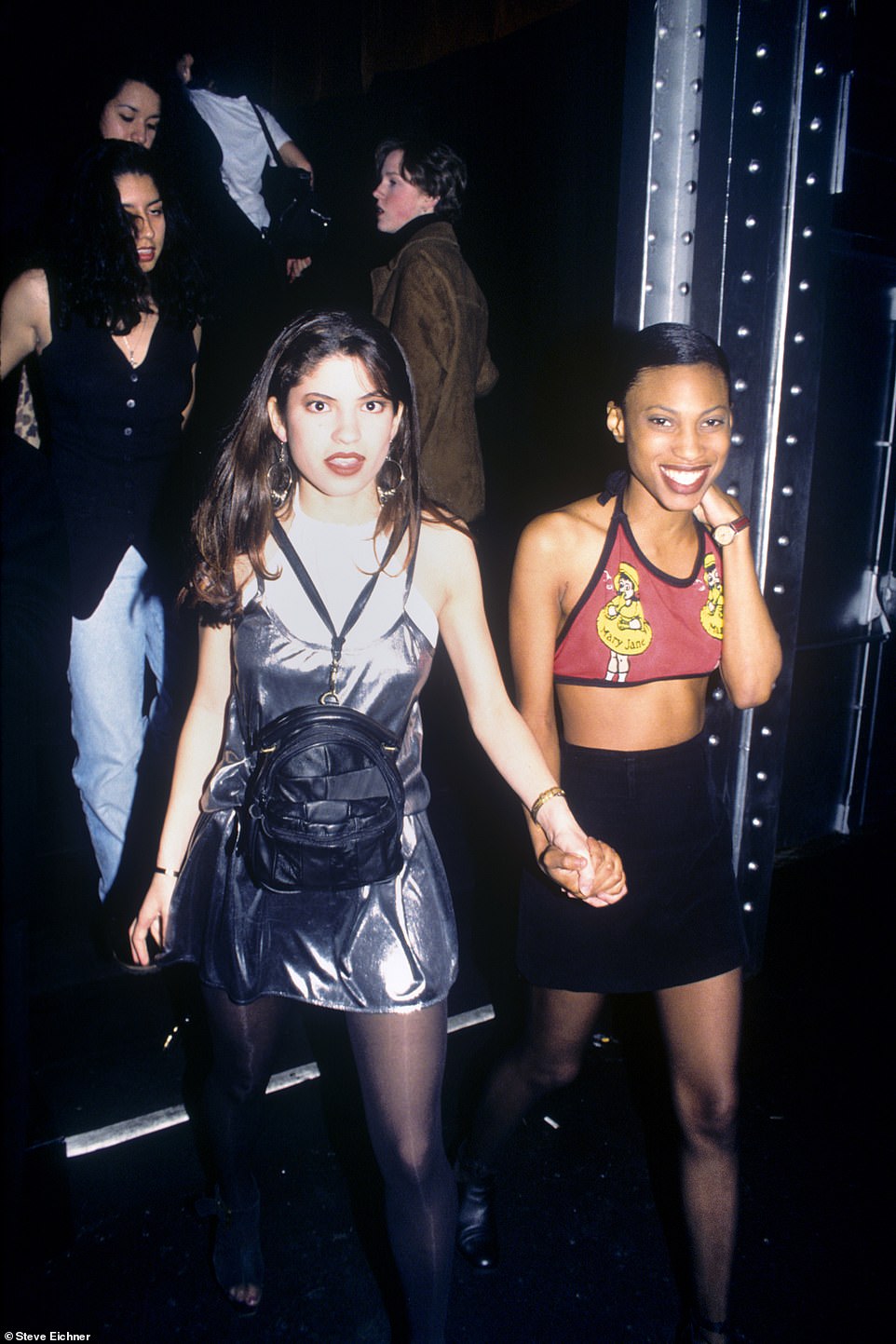 Clubgoers: Two young partygoers are pictured in 1994 walking down the entrance stairway and into a night at the massive Tunnel club. Grinning ear to ear in their rave fashion with anticipation for what magical experience the night may ho